Rough recipe:
Slice up a bunch ‘o veg. 1 carrot, 2 celery stalks, 1 bell pepper, 1 apple, little handful of radishes, I small head broccoli, 1 pint jar home-canned chicken.
Fat: my new friend rice bran oil. The list of foods to which I either have an allergy or intolerance is growing, and this is one of the few high-heat oils I have left I can use.
Seasonings: sesame oil, Chinese five spice, local lime Sriracha sesame salt, little bit of garlic,
Cook the veg until they’re tender crisp. Add the chicken and cook until it’s all warmed through. Serve over a little brown rice. Devour. There was enough for the husband and I and leftovers for my lunch tomorrow.

Congratulations on your first BB! It's certified

Sage Grant
Posts: 17
Location: Warrnambool, Australia
5
posted 6 months ago
Approved BB submission
Recipe definitely rough indeed! Had beef mince that had to be used up, and went out in the garden to get all of the other ingredients (bar garlic and onions already stored inside), but it was already dark, and I didn't bring a bowl with me so had to get everything in my hands....maybe not a typical stir fry, but it worked out!

Rice cooking in a pot first (unfortunately didn't get a pic once the rice was done, or I could've doubled it with the stovetop rice BB!)

Beans at the end of their growing time, so decided to take them out of the pods

All mixed up in the pan

Served up! Made three bowls worth

Back to the land in under an acre at Innisfree Homestead 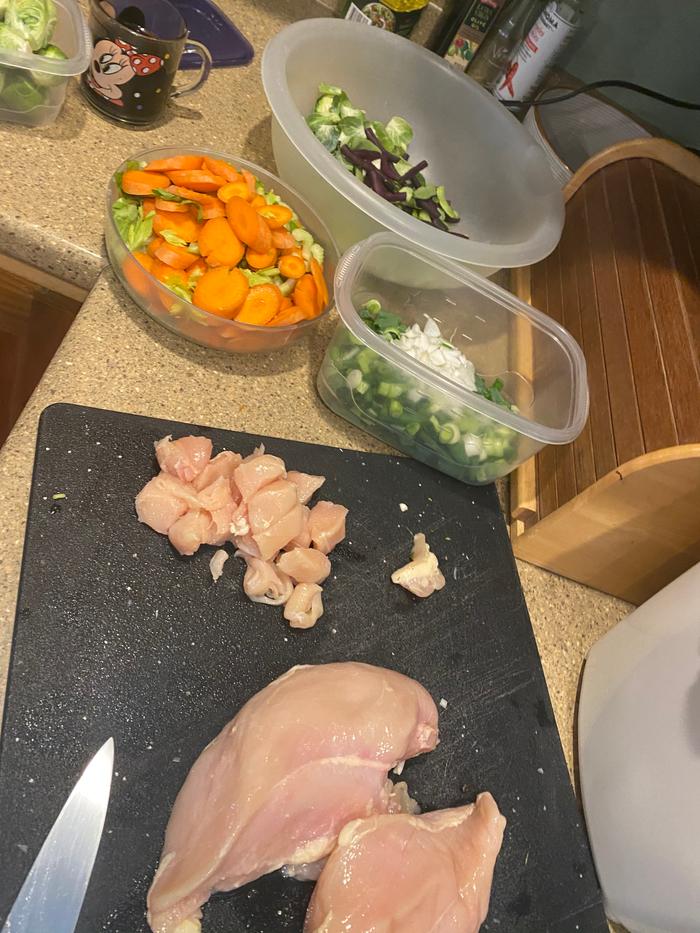 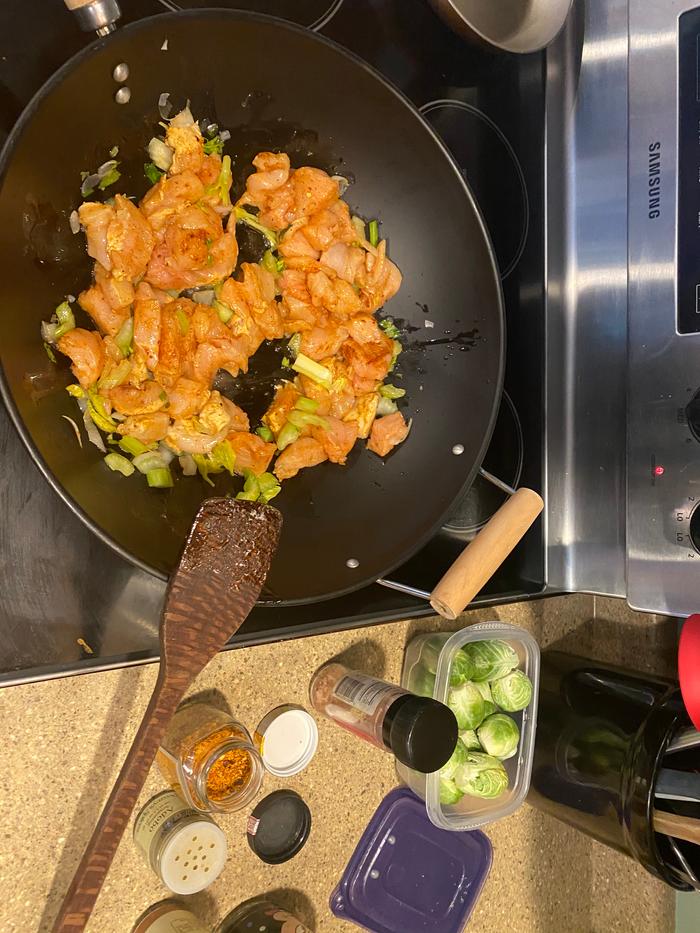 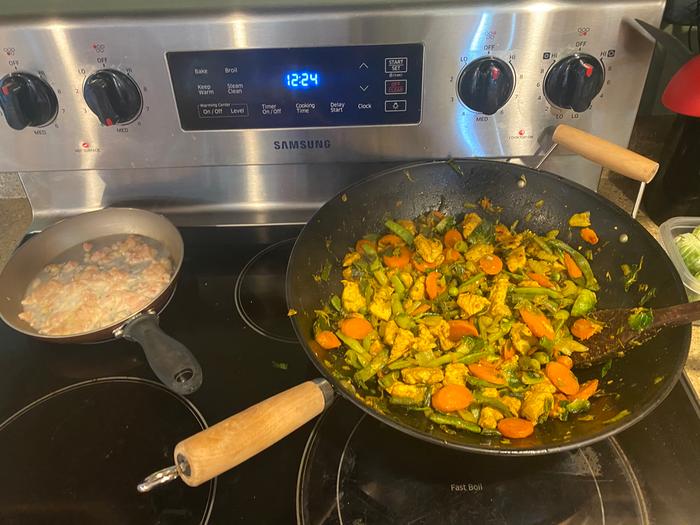 posted 3 months ago
Approved BB submission
I can get one more BB!
I often make stir-fries. I only had to take photos to get this BB.

Ingredients. Take whatever kind of vegetables you like. I always have at least one vegetable from the 'onion-family' in it. In this case even three. The leek is in this photo. Then there's a red pepper (it isn't a hot pepper) some cellery and a courgette.
I used butter, because that's a product from this region where I live. Then there's my own fermented sunchokes, sambal (Indonesian hot pepper sauce) made by a friend and soy sauce.

All vegetables neatly chopped and put in bowls for the photo

Fry onion in butter until it is golden

Add all other chopped vegetables. Stir and fry. Add hot pepper and soy sauce. Lower the fire and let simmer for some time (not too long)

Then I added cooked Bulghur.

Then I enjoyed my meal

posted 3 months ago
Stir-fry for the family made from a combination of garden produce and store-bought. Carrots, onions, green beans, purslane, daylily buds, kohlrabi greens, and dried tofu. 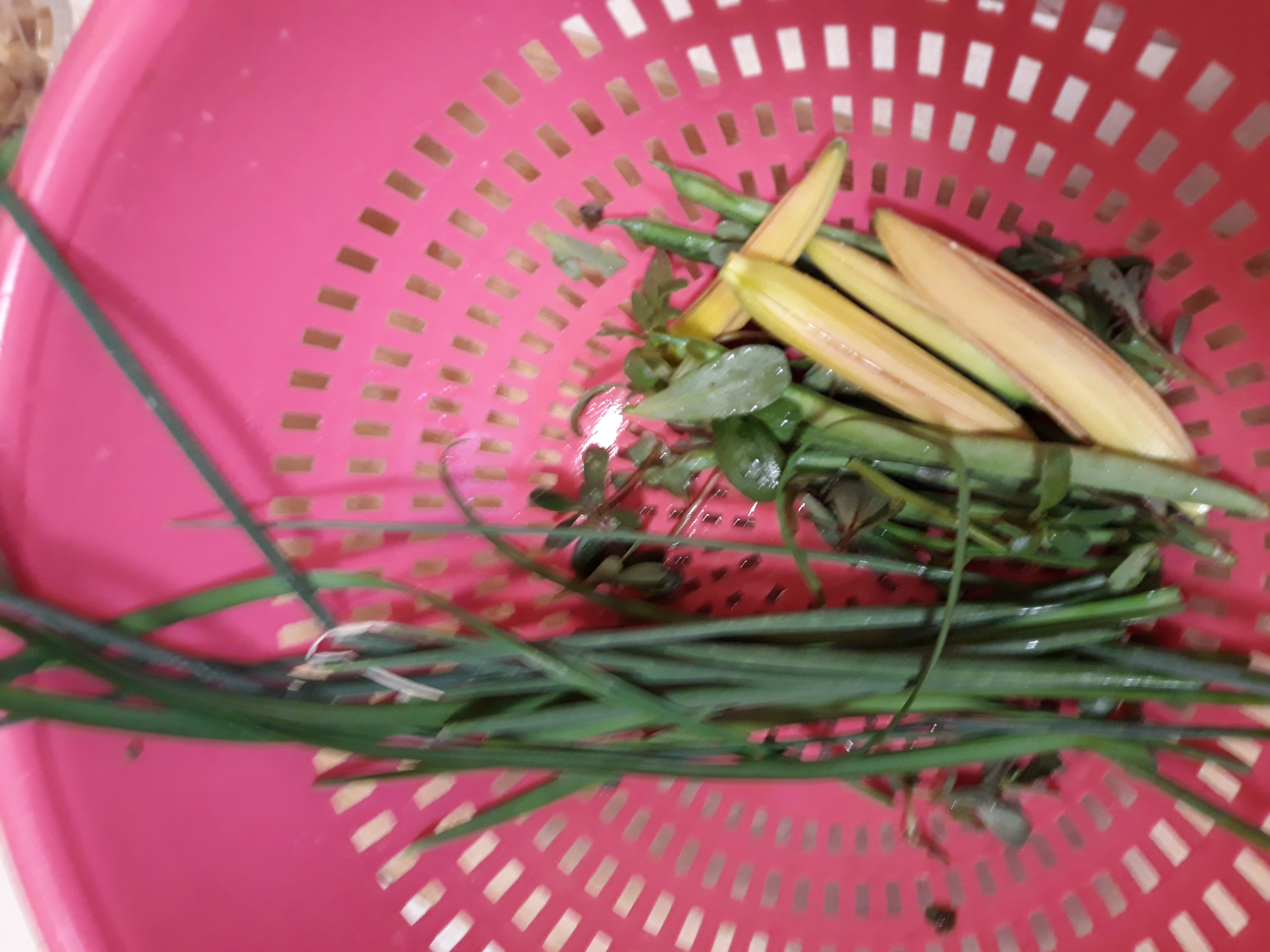 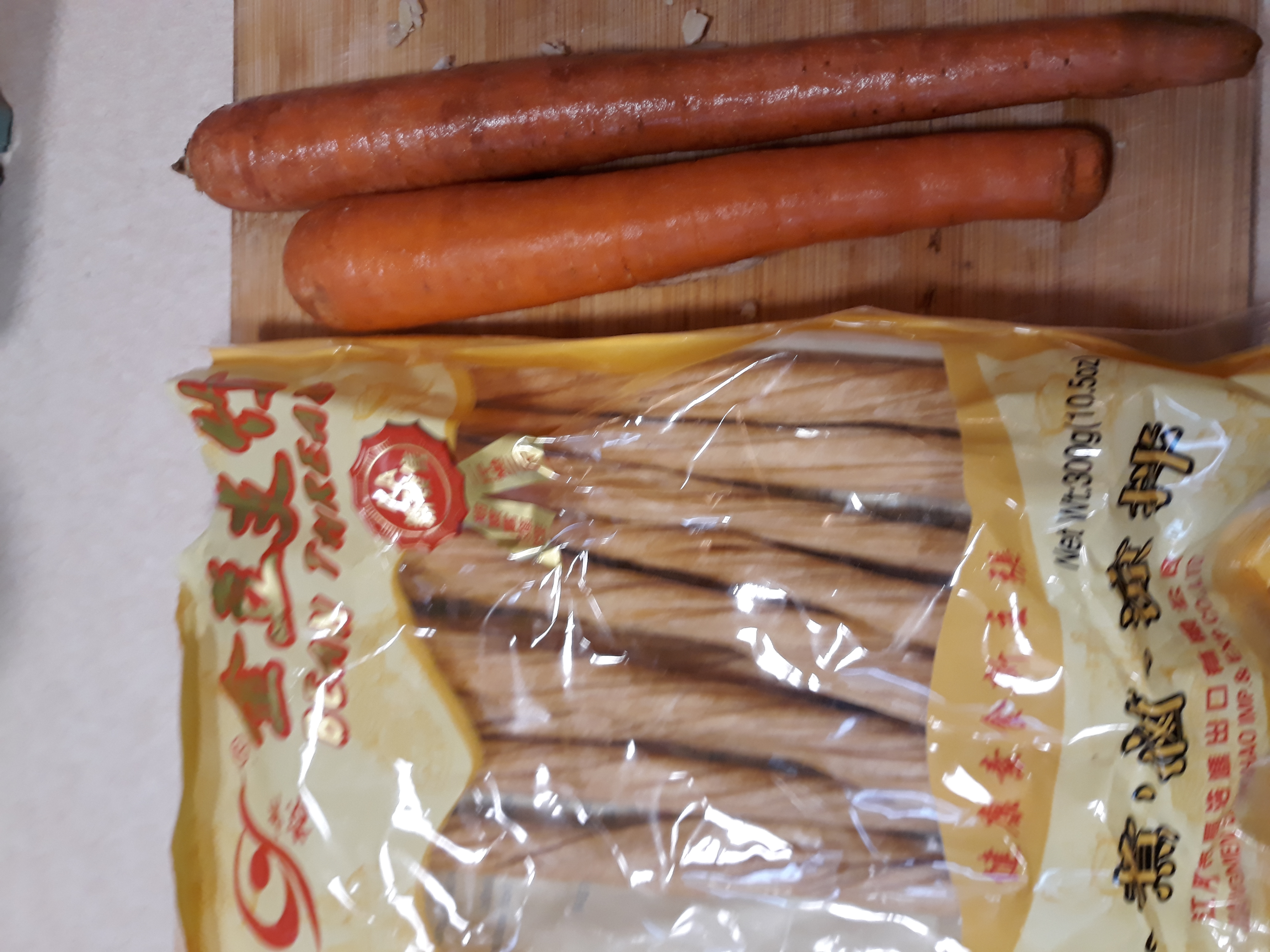 The "bean threads are dried tofu that needs to be soaked in hot water, then cut into strips.

I heated the oil in a wok on high heat, then added the julienned carrot, green beans, and some onion. After those softened a bit, I added the other garden vegetables.

The poured in the sauce: 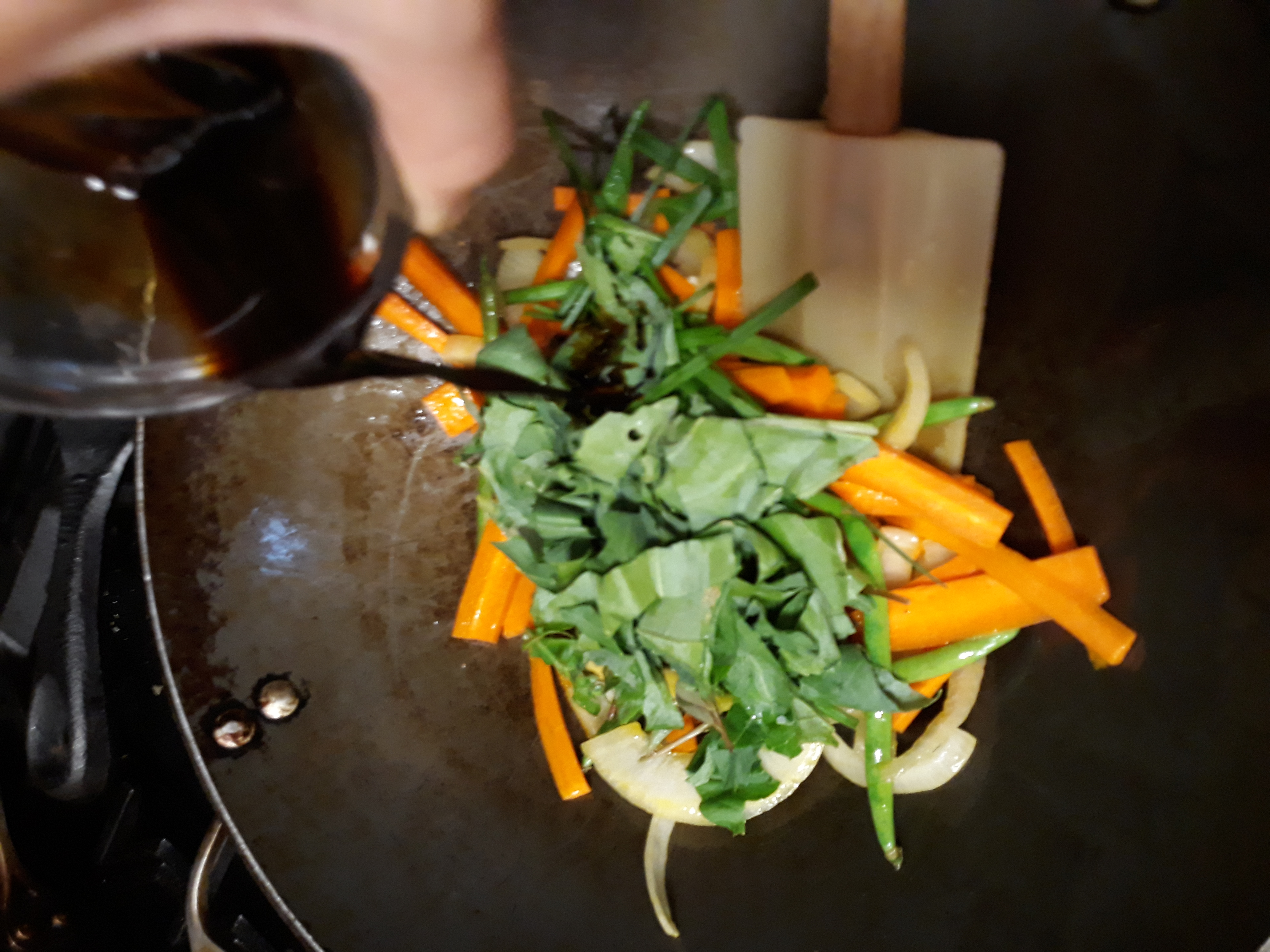 The tofu strips were added last, then everything stirred for a few minutes. Once sauce had almost boiled dry, I added some of the tofu-soaking water, covered the wok and turned heat down a bit. Just before serving, I uncovered and turned heat up again until everything caramelized a bit.

Garnished with some peanuts and served alongside rice. 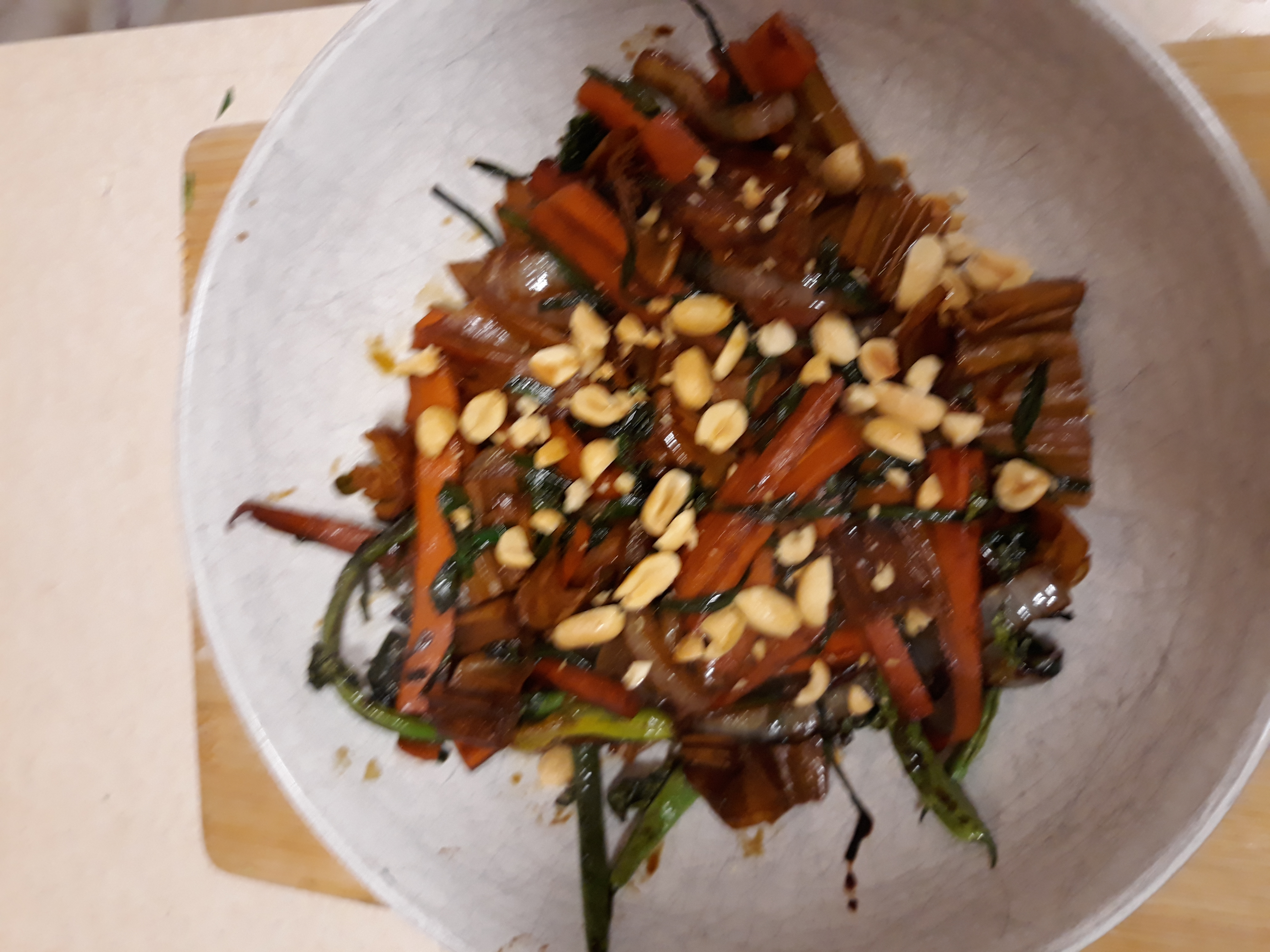 posted 3 months ago
Approved BB submission
Suppose I'll try this PEP business, seems like the cool thing to do.  I'm not sure if the point of this is to be brass tacks, just the facts, ma'am, or are we supposed to regale each other with amusing stories. I suppose I'll just share my stir fry journey and be corrected later if that's not the point.

In my opinion a good wok is critical.  I like hand hammered carbon steel.  Here's a video review I did of one for an online restaurant equipment vendor:

In that case I was reviewing a large wok for traditional Chinese street cooking over a burn barrel. Funny story. I was in Li Ming's, an asian grocery store. The manager at Li Ming's and I got into a.... well, altercation is too strong a word. Spirited debate, let's say, about wok seasoning. That's right, someone came at me regarding wok seasoning. Or, depending upon your point of view, I came at a woman who runs an asian market and sells woks for a living regarding wok seasoning. I'm not sure who was more ballsy in that scenario.

I do know who won, though, which was the customers, as we strode up and down the aisles loudly questioning each other's practices and preferences. The looks of amusement and bemusement were priceless. At the end I walked out with a complimentary calendar and a personal cart-handler.

You asked about recipes, and that's a pretty broad topic.  I learned the basics from trial and error and from my Cambodian RA in college.  Many long nights studying techniques and ingredients. Then learned a bit more from Helen Chen, the CEO of Joyce Chen Products, including the secrets to making good fried rice, which had eluded me up to that point.

Anyway, vegetarian stir fries are pretty straightforward.  Slice all of the vegetables uniformly so they cook at the same rate, begin with screaming hot oil, gently slide in some sliced ginger and smashed garlic, take one or two breaths then immediately slide in your most robust vegetable.  That's likely to be carrots.  The next level is onions and the like, then peppers, then finally the fragile ingredients like bean sprouts, mushrooms, green onions, etc. All the while, tossing and stirring like a crazy person.  Garnish with shredded herbs, fresh ginger threads, seasame oil, or whatever vibe you are going for.

For protein I love flank steak.  I keep it slightly frozen so I can slice off long shreds across the grain.  They always say across the grain and I'm like, there is no grain, just a bunch of marbling.  But on flank steak there is no mistaking it.  Make your pile of thin slices then put it in a bowl with dark soy sauce, Shaoxing , and corn starch.  Then jazz it up with some chili garlic sauce, or ginger and lime, or chinese five spice powder. Let that marinate while you prep the other ingredients.  There should be no extra liquid. Proceed as you did above except that you begin by putting half the beef into the hot oil and letting it sit until you are convinced there is a sear, then flip it, sear that side, then remove to a bowl and do the other batch.  It is critical to not crowd the pan. Then you have a nice carmelization base for the vegetables.

I attached a bunch of images but they aren't showing up in the preview.  I'll just leave this here while I go look for the help guide.

I certify this BB complete! Congratulations on your first BB and your new Air badge in Food prep and Preservation! Brass tacks is fine, detail is also ok but lengthy back and forths about it with other posters may be better in their own thread.

posted 3 months ago
Approved BB submission
Every stir fry is different by the batch, but here are the rough measures in the recipe:

The seasoning powders and starchy rice add thickening effects without cornstarch. And the peanut butter is a secret technique for getting a more authentic flavor when you don't have peanut oil handy (a trick I picked up from the original Iron Chefs).

I certify this BB complete along with your new air badge in Food Prep!

posted 2 months ago
Approved BB submission
If I get this it will be my first BB - so excited!

I love stir frys, probably because I love soya sauce, but I am celiac so I have to go for alternatives or close toos. Stir frys are great for just finishing anything you have in the fridge and they always turn out so yummy.

I have eggplant, zucchini, green peppers from my garden, and a local garden. Onions are from Kroger.
Meat from a local butcher - just a slice of beef that I cut into slices.
I used butter as the fat
GF soya and a coconut soya type sauce.
Fried everything up and added the soya
Grated in some carrots towards the end to add color

Then I have it with wild rice - which is so very yum.

As a side - the new format that apple has introduced for images (HEIC) does not display when you upload as an attachment so you have to save it as jpeg or something else. 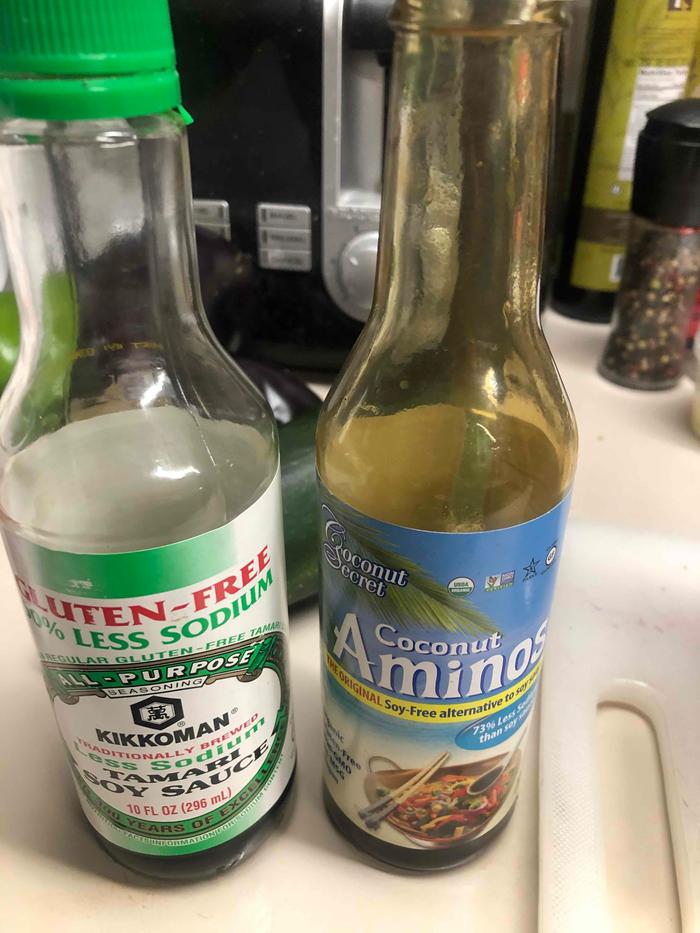 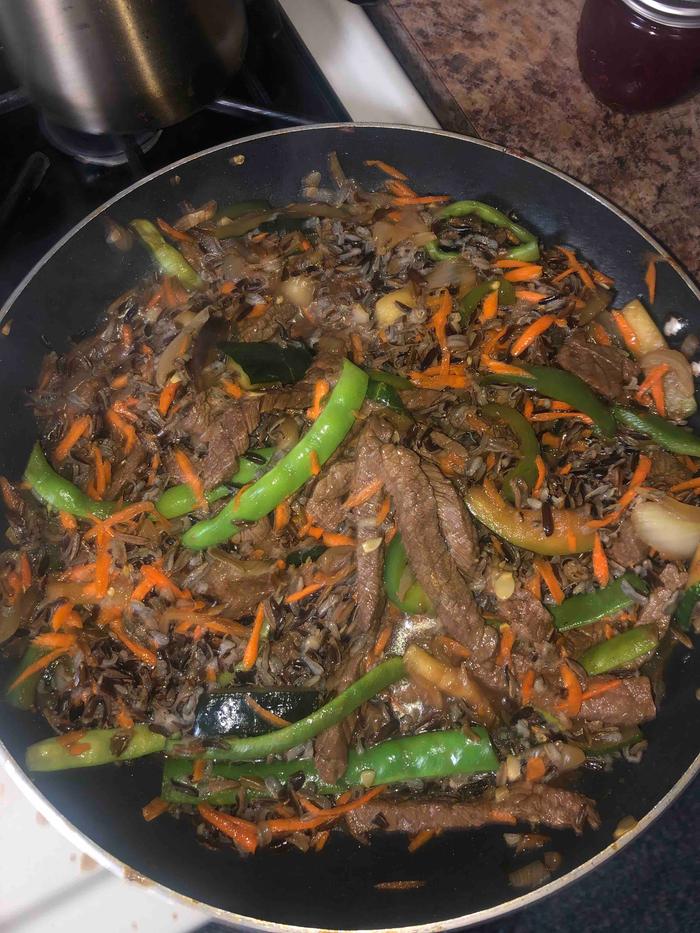 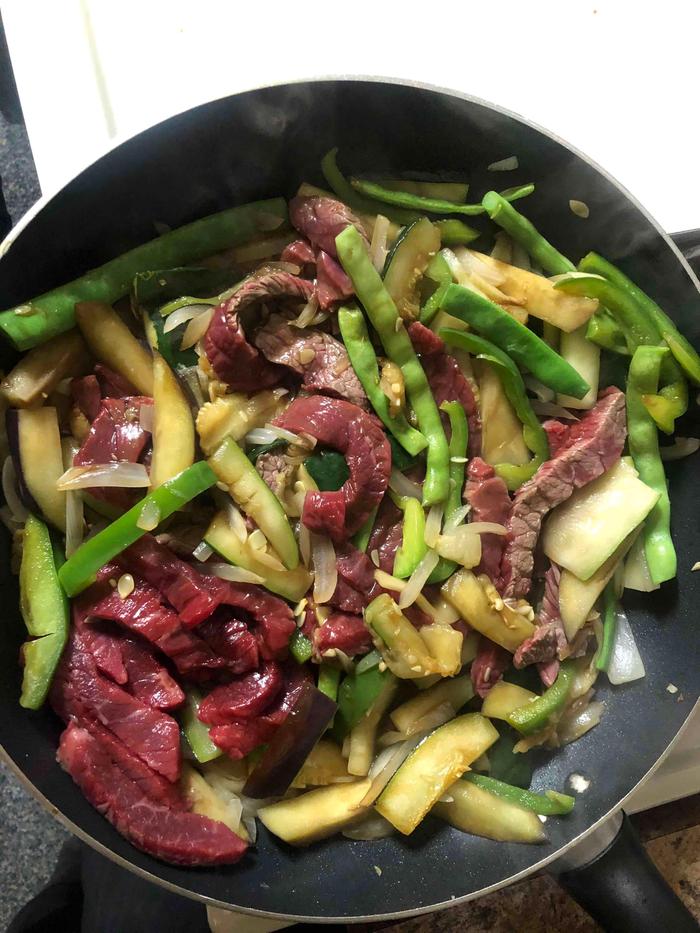 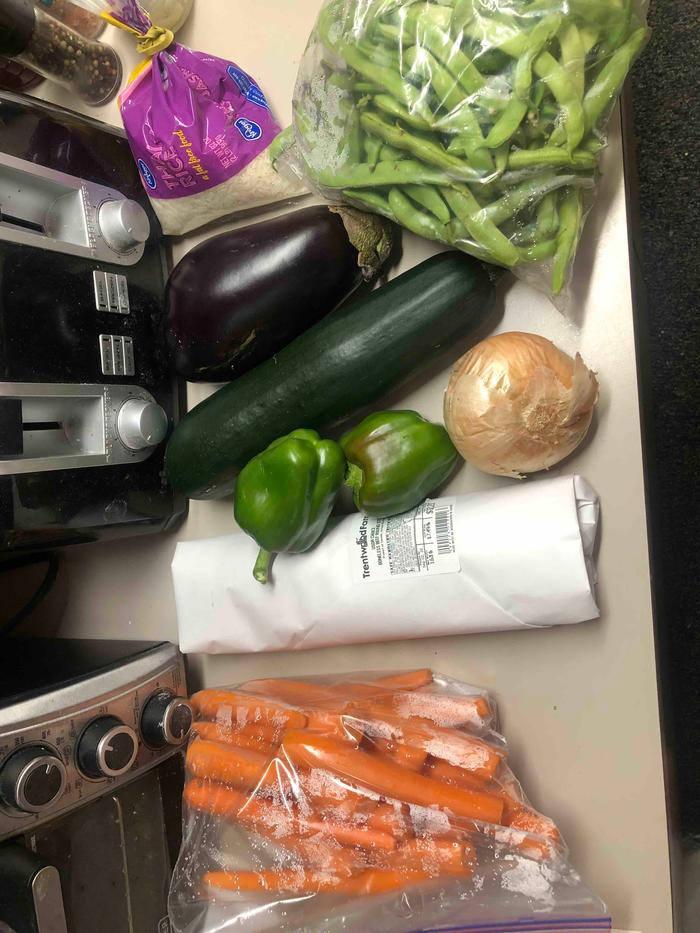 posted 2 months ago
Approved BB submission
I've been reading about BB's, and then I saw there's one that lined up with my dinner plans, and just needs photos.  Terrific!

I made a "clean out the fridge" stir fry.  We had 3 chicken thighs (to feed 4 people), a few mushrooms, a couple of bok choy, the paler inside of a bunch of celery getting soft in the veggie drawer.  I added in one small carrot and a couple purple cabbage leaves for color.  I cooked all that, in that order (saving the leafy part of the bok choy for last) and then realized I needed onion.

So, I pulled the mostly cooked vegetables into a container and started over with a thinly sliced onion (I'm using lard as my fat as I have a lot of it.) I then added one Anaheim pepper, left over from last night's enchiladas, and then the chicken, which had been cut into pieces and marinated in coco-aminos.  I added diced garlic and ginger, also some peanut butter and hoisin sauce I made last year from plums and spices.  Served it over white rice, cooked in the pressure cooker.  We ate it all up, so I'll call that a success.

I certify this BB complete along with your first Air Badge!!!