Could we have an urban/suburban permie picture thread?

Denise Cares wrote:Great post.  Very nice transformations going on here!  Question for George Y: how did you make the arches for mom's berry bushes?  They are so tall.

Hi Denise, the arches used for the blackberry vines are from Aldi, and are the "Gardenline" brand.  I got mine on sale, and I believe they were ~$20, perhaps?  Mom loved the one so much that we bought a couple more.

"Be excellent to each other"

posted 1 year ago
Just checking in on this thread, and a couple people were bemoaning pines, and their shade and needles. The needles make fabulous compost. They don’t mat up like so many other (unshredded) leaves, and the fungus just loves it. Poke at a pile of pine needles that’s been sitting for a year, and you’ll see some fabulous hyphae.

Pines generally like acidic soil, and like so many other plants and people, do their best to alter the environment to their liking (I’m pretty sure). I’ve planted blueberries near my pines, and I regularly scoop up a handful or two of needles and tuck them around as mulch. With good water management, I’m hoping that these berries will thrive, or at least survive, in the somewhat shady acidic conditions.

I’ll report back at the end of next year. I planted 6 blueberries in a variety of microclimates, and I’m liking forward to see which are the happiest come harvest time.

Our pine shades our neighbors’ fence line, and they’ve had great luck with highbush blueberries grown in the shadow of that tree. They’ve been gardening successfully more-than-organically in that space for decades, so I don’t see any reason not to follow their lead.

Nikki Corey
Posts: 31
Location: South Texas
11
posted 1 year ago
I technically live in town, but we have a few acres. My obstacle in gardening would not be space, except for my husband. He likes monocrop grass lawn. He would prefer that our property look like a mowed park (with a few trees- for shade only) or a golf course. I would prefer that our property, all but a small lawn for the kids, look like a permaculture food forest.
As a compromise, because we respect one another, we have a few “food islands” between the grass. The islands out front have to stay neat and tidy looking, no chop and
drop or anything that looks like a weed. The island out back can look a little messier. The grass here has been a big impediment for me because it grows below the ground and above the ground to cover everything.
Looking at my photos, it may be hard to see some of the stuff. Part of that is because it’s December, and many of the trees have lost their leaves and the other part is because some of them are new plantings and there isn’t much to see yet. We’ve only been here for 1.5 years.
I’m going to try to post to this, and then come back and edit for details about the islands. This is my third attempt. The first two were deleted.
Okay... out front, my larger island has a peach tree, a crab apple tree (upon which I hope to eventually graft on Anna and Golden Dorsett branches), and a black Mulberry tree. My smaller island is mostly pigeon pea shrubs with another small mulberry and a redbud, with a new avocado nearby. In the background, there are some rows with fencing visible. Those will be blackberries, tayberries and loganberry. There are sweet peas and lupine planted between them to cover the fence and make it look and smell nice and also provide some nitrogen fixation. Those berry rows were a tough sell to the husband, but I don’t have a lot of space here that gets a lot of light, so out front they went.
You may not be able to see it well, but the Rose Island picture has all of the front islands visible in the background. The larger island is to the left and the smaller island to the right. In the very back of the photo, near the road there are two large native pecan trees. In a straight line between those, I have two crape myrtles planted and a kumquat tree snuck between them. There are also two passionfruit vines planted at the base of one of the pecans. I’m hoping to string up a trellis between the pecans this summer and put Chayote squash on it. It will provide some food and some privacy from the road.

Nikki Corey wrote:I technically live in town, but we have a few acres. My obstacle in gardening would not be space, except for my husband. He likes monocrop grass lawn. He would prefer that our property look like a mowed park (with a few trees- for shade only) or a golf course. I would prefer that our property, all but a small lawn for the kids, look like a permaculture food forest.
As a compromise, because we respect one another, we have a few “food islands” between the grass.

"Learn from yesterday, live for today, hope for tomorrow. The important thing is not to stop questioning." —Albert Einstein

Emilie McVey
Posts: 71
Location: central Pennsylvania
5
posted 1 year ago
I hate to be so ignorant, but what is the "herb spiral" several of you have mentioned?

Emilie McVey wrote:I hate to be so ignorant, but what is the "herb spiral" several of you have mentioned?


When I first heard about permaculture, it was about a 'herb spiral'. Someone told me about building a spiraled shape out of (re-used) stones, bricks or tiles, filled with soil and planting herbs in there. The different sides of the spiral get more sunshine at the south side and less at the north side, so it's a way of growing both sun-loving and shadow-loving herbs in a small space.
The 'herb spiral' I made is not as high as most of them are.
Here's a photo of the way it started in 2015

spiral to plant herbs in

posted 1 year ago
The neighbors' side of the front yard - my Christmas present to them:
neighbors-xeriscape.jpg

posted 1 year ago
Here are some views:
John S
PDX OR
Back-yard-food-forest-April-2014.jpg 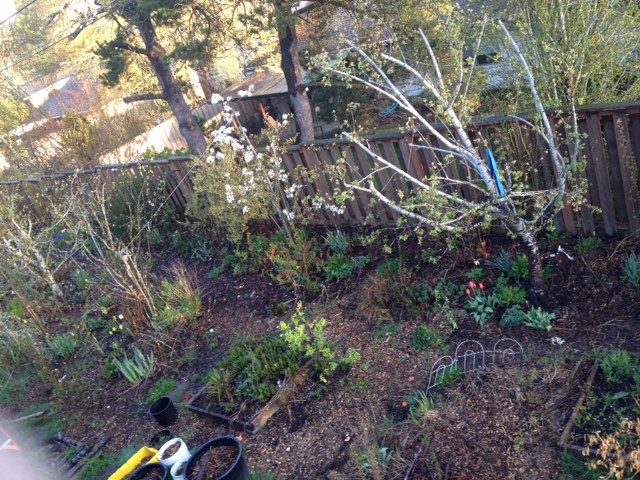 posted 1 year ago
Front of house: 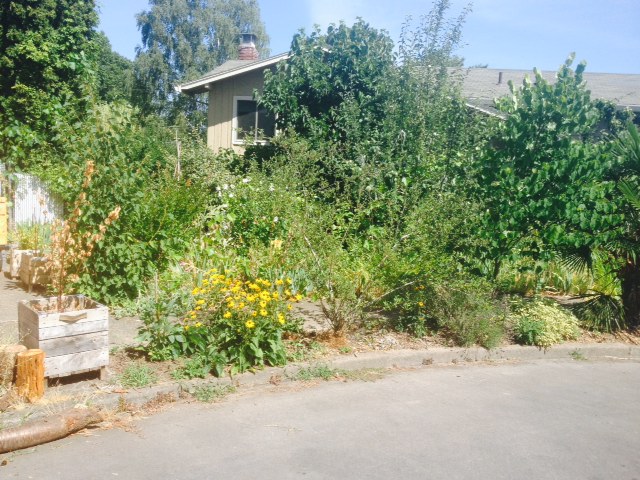 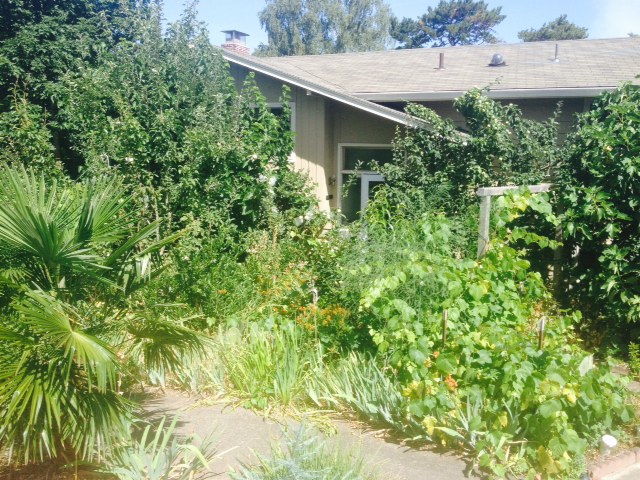 posted 1 year ago
How about another?
Sunny-backyard-with-umbelliferae-2014.JPG 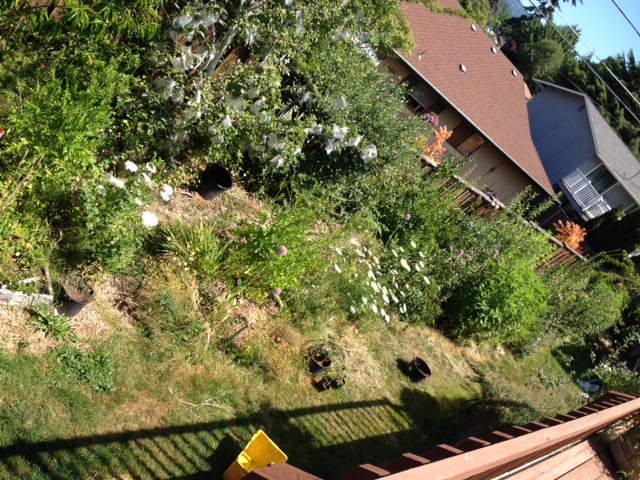 Keeping the world green, one party at a time!
http://www.YTEevents.com
(eco-friendly event decor)

posted 9 months ago
I like what you're doing, Jonathan.  It just keeps getting interesting in new and different ways over the years.  And you can keep doing it well when you're old, like me, which isn't true for many hobbies/activities.
John S
PDX OR

Kena Landry
Posts: 74
22
posted 7 months ago
A quick tour of my tiny urban yard. We live in a post-war house, so our goal was to respect the spirit of the era: victory gardens, resourcefulness and a very "cottage garden" approach.

For vegetables, we have two main raised beds (both 3 feet deep - 18 feet in length total). I am also starting to add the brick half-circles along the neighbour's fence. They will hold a combination of perrenials and annual veggie plots.

Along the side of the house are strawberries and a few medicinal/ornamental flowers.
Daniel Ackerman
pollinator
Posts: 144
Location: Lehigh Valley, PA zone 6b
43
I like...

posted 7 months ago
That’s really excellent! I love those half-moon beds along the privacy fence. How is your sun? In our urban(ish) lot, there’s a lot that has been going into less than perfect light situations.

Kena Landry
Posts: 74
22
posted 7 months ago
The back area (with the composter) is mostly shade (hence the mulch in lieu of grass). We might have some shade-loving fruits some day, but probably not much of a yield. We do eat the violet leaves though, and I'm hoping to add shade-loving medicinal/tea plants.

But the rest of the yard is decent, sun-wise. Enough to get a good yield on tomatoes. And our deck gets a lot of sun, so we can have containers that move depending on the needs and seasons.

We also have a balcony upstairs that gets full sun all day, so that could be an option for growth some day (but water access is a challenge, so we haven't exploited it yet. I might have to run a hose up the wall some day.)
William Bronson
gardener

posted 2 months ago
I have more space than most urban gardeners, but I still find space saving growing methods to be useful and satisfying.
Here are two examples, one had tomatoes,a  blueberry bush and a mimosa tree.
The other had tomatoes, onions grown from scraps, and a grape vine.
The tomatoes are gone from each,  cut off at the root.

posted 2 months ago
I love the bike wheel.  I'm surprised to see you are intentionally growing mimosa.  I thought they are an invasive non-native species.  Not criticism just curious about your take.

Great question .....though I am not sure if it is intentional.  I have been fighting Mimosa on my property for years.

posted 2 months ago
I'm pretty certain mimosa are nitrogen fixers.
Their flowers a beautiful,  edible(not delectable,  just won't kill you)  and a real draw for bees and humming birds.
The leaves show up late in the spring and create a dappled shade.
They stay on the trees late into the cold as well,  and the litter just melts into the soil,  it's so small.
The seeds are everywhere in my soil,  but they transplant poorly.
We had a huge "mother tree" in the backyard,  but soil compaction and disease took her out.
Her daughters and grand daughters persist,  but I think this area is nearly the northern edge of their range , so they don't really get out of hand.

I do wish I had prairie mimosa instead,  but for volunteers,  they are nice company.