Merit Badge profile
Forum Moderator
William Bronson currently moderates these forums:
Montessori kid born and raised in Cincinnati.
Father of two, 14 years apart in age,married to an Appalachian Queen 7 years my junior,trained by an Australian cattle dog/pit rescue.
I am Unitarian who declines official membership, a pro lifer who believes in choice, a socialist, an LGBTQ ally, a Black man, and perhaps most of all an old school paper and pencil gamer.
I make, grow, and serve, not because I am gifted in these areas, rather it is because doing these things is a gift to myself.
Cincinnati, Ohio,Price Hill 45205
Apples and Likes
Apples
Total received
579
In last 30 days
18
Total given
1268
Likes
Total received
4710
Received in last 30 days
178
Total given
5223
Given in last 30 days
111
Forums and Threads
Scavenger Hunt 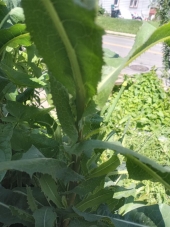 Wild Lettuce?
Yeah,  that what I had read.
I'll have to try it, boiled with butter.
There are only two of them,  so spreading them will be the priority.

You know you're a permie when...
When weeding your front "lawn" consists of trying to kill the last of the grass.
show more
14 hours ago
meaningless drivel

You know you're a permie when...
I suffer the little box elders to live, so clearly I actively value redbud.

I want to try the pods while they are still green.
They reportedly eat like snowpeas.
No clear reports on humans eating the dried seeds, but birds are said to like them.
That's the main draw,fodder for chookens.

Hopefully this will be the year where the mulberries prove their worth as fodder .
Last year the girls wouldn't eat them, which puzzled me, until I realized they were probably full from all the cicadas they has eaten 😅
show more
16 hours ago
meaningless drivel

Wild Lettuce?
Pretty sure it is, what do yall think?

show more
17 hours ago
plants
Shaping trees by breaking branches...
I've noticed that you can break the branches of some plants, and, unless you actually remove the branch, they will continue to grow.
Cane fruits in particular seem to just heal up and keep going.
Yesterday I was at my yarden looking at some mulberry trees I had heavy pruned.
The new branches are coming in with a vengeance, but some if them were too upright.
Rather than attempt to tye them all down, I bent them downwards till they cracked, and left them, still attached but now pointing downwards instead of up.

Will it work?
Time will tell.
What other trees or shrubs might work with this process?
show more
1 day ago
trees

You know you're a permie when...
When you transplant volunteer box elders...

New bed, plant spacing
I love the questions!
The block is a little high for the plants, I wanted 3 courses and I ran out of finished compost!
We shall see how they do.
The sun is high in the sky and they are even getting reflections from the glass behind them.

There are some mortgage lifters,  some random cherry tomatoes and I think the cumbers are national pickling?

Seasonal shade from plants is one of the goals.
I have used white pva  shower curtains  inside the greenhouse to make it reasonably comfortable.
They breath and hold up to humidity well.
I was a little surprised it worked on the inside of the glass, but it did.
I was talking to a friend who grows vegetables professionally and she suggested snow fencing as a shadecloth alternative.
I like the idea, but I don't think it will work well inside the greenhouse.
I think it would absorb the heat from the sun it blocks, instead of reflecting it.

The greenhouse was wedged in along the east side of my yard.
It's long and narrow, running north to south 😕.
It will only ever grow low light crops, but I'm ok with that.

It's not done yet, hell it may never be done.
I wish I could see things through in a timely manner, but I really have a hard time doing that😕.
Rather than bemoan my fate,I just do what I can, and some things get done.

My wife wanted tomatoes and cumbers, and the beds in front of the greenhouse needed to be finished, so that's what I did.
There has been lots of rain and the plants are doing well .

When things start to cool down in the fall, I plan on draping these beds with plastic to extend the season a bit.
The eves of the greenhouse extend over the beds ,so I'll hang the plastic from there.
If I leave it in place, it will provide a double layer of glazing for the plants inside the greenhouse proper.
That might be too much light reduction, but we shall see.
The climbing plants could be replaced with winter hardy greens,  legumes or rye.
If I can get a pile of leavesor woodchips, I'll cover the soil in that, add pee and put my wintersowing containers on top.


I was thinking I could protect the seedings from drying out by planting breakfast radishes thickly, and harvest/ thinning them as they grew.
Radish greens are delicious.
I was going to mulch with rabbit bedding, but I used up everything they had!
I am considering buying alfalfa hay, but it goes against the grain.
Maybe some peas?
I got a bag from the grocery, very cheap.
By the time they are ready climb, I could cut and eat them, or chop n drop them.

The greenhouse has two refrigerators that were destined to become wicking beds.
Because I need water for the beds anyway, and I have been recently obsessed with growing azolla, I'm considering using one of them as an azolla grow tank/rainwater storage.
Azolla likes partial shade, it fixes nitrogen and it seems like fun.
I need the fridge to be filled with thermal mass anyway, so it would be two(three?)birds with one stone.
I am liable to get distracted by something else, but will probably come back to it.

food forest confusion
Here's my most food foresty  bit of garden:
It has hardy orange,  raspberry and Siberian pea shrub,  plus a bunch of self seeding mustard greens and some alliums.
Those are the things I planted.
There is a lot more life here, and that's good.
I occasionally "weed" things, but it's not a priority.
show more
4 days ago
forest garden

New bed, plant spacing
I've planted them 1 foot on center.
I've added green onions around the perimeter 8"on center.
I may sow seeds as a ground cover.
Any suggestions?

I have "planted" into three of the cavities, mulberry branches that had new growth more than a month after being pollarded.
If they take, I will prune them to provide summer shade.
I want to leave most of the wall open to sit on.
Are there herbs that make a nice cushion?
show more
4 days ago
gardening for beginners

New bed, plant spacing
Indeterminate.
The eaves of the greenhouse are right above,so I was going to try strings and clips.
I guess that counts as a trellis.
show more
4 days ago
gardening for beginners