Choosing a Plum Tree Species
I chose a Methley plum because they (supposedly) do not need a pollinator and I don't have room for more than one in my garden.  I only planted it in the spring, so, sadly, I don't have much information for you.  I ordered it from Stark- www.starkbros.com. Don't know if they ship to the UK.  It was a two year old bare root plant and grew very vigorously after I got it in the ground.

I checked out your site and thought I'd share this article, since you are working in a small space, too.  I am trying this pruning method on my plum, so far it is responding well.

show more
2 months ago
fruit trees
Help propagating fig tree with sentimental value
I don't do anything very scientific but in my experience figs have been fairly easy to propagate.  I have had success by taking  8 to 12 inch cuttings of 1 year old wood with 3 or 4 leaves and a nice bud on the end .  I generally strip a little of the bark away on the rooting end and then coat with rooting hormone and stick into a container of potting soil. Sometimes I've stripped the leaves and sometimes I've left them.  They fall off anyway, so stripping them is probably fine.  I'll stick three cuttings in a gallon pot to save on materials and space.  If more than one roots, they don't seem to mind being moved around later, but my success rate has been around 30% so the math is on my side at three per pot.  I have only tried rooting at the end of the season, so September/October, but you might not be too late in Charlotte if you go for it now.  I have never tried to root any that were fully dormant.  Although I just leave them outside and keep them well watered, the varieties I have experience with, Celeste and Brown Turkey, are susceptible to the cold when young, so if it looks like it might get below 20F you'd probably want to get them somewhere they'd stay warmer.

Good luck! I have quite a few plants from places that have memories for me and I always wish I'd made the effort to get more.
show more
2 months ago
fruit trees 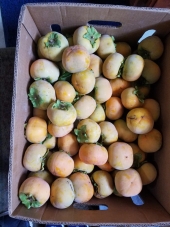 I love harvest season
Ha! Brings back memories of my grandpa in his yard with a .410 shotgun, shooting and cussing the squirrels. And my grandma's squirrel stew!  I don't think my HOA would approve of that method of control or my kids of the stew!

On a sort of related but counter-intuitive note, I had a bird feeder in the yard (and kept it filled) for the first time in a long time.  It seemed there was a lot less pressure on the grapes, figs and berries.  I got good harvests of all without much effort at protection.  Maybe the birds were satisfied with the easy pickings at the feeder.  Of course, it attracts squirrels, too. But they are easy targets sitting on the ground looking for what the birds drop!
show more
3 months ago
fruit trees

I thought permaculture insect control had failed me, but land racing saved the day!
There's lots of good stuff already in this post, but I thought I'd throw in a few of my observations.  I have been gardening in the same small spot for about 15 years now and I have learned that I need to rotate crops not only in space but in time, as well. I don't have that much room to move things around, and I have found that I can grow the same things (squash, tomatoes, cucumbers, beans) in the same place for a certain number of seasons before pest pressure begins to build.  For instance, I grew squash for a couple of years with no issues, then 3 years ago I had an infestation of squash bugs (some of the pictures in this thread brought back bad memories!) so I shut down the squash. No squash until this year and I haven't seen a squash bug yet, despite going overboard on the squash plants. I had hornworms for the first time in a few years last summer, so I don't have any tomatoes this year. We'll see what happens next year.  After growing beans and cucumbers in the same spots for a couple of years, I noticed some kind of worm that was getting in the fruits.  I swapped their locations and haven't had a real issue yet this year.

Brassicas are a problem for me, though.  Some sort of brassica is necessary for a cool weather garden in NC, but the cabbage worms always find them.  Time again is an ally, planting at the right time in the fall and the brassicas will begin to grow but then it will get too cold for the worms and I don't have to squish them or spray the bT. I did notice this spring, though, that a mixed planting of some collards with various herbs, mustard and radish had no worms.  I plan to investigate/replicate in the future.

I have the constraint/luxury of only growing a few things so I have to find ways to make it an advantage.  I am almost tired of zucchini this year and I find myself thinking of fresh tomatoes and homemade salsa already!

bigger berries in the shade
My blackberries are in a shady spot.  I worry that they are too shady. They go from about 4 hours of sun in the spring to maybe 1 in midsummer. It's a real edge type setup. The berries are big and juicy, though, similar to the ones in your picture.  Unfortunately, the deer got into them and I haven't harvested many for myself!  The worst part is they ate a lot of the new canes so next year might not be so good

show more
5 months ago
forest garden
seed starting experiment
I have tried a few different seed starting mixes and have not noticed much difference in the actual sprouting times.  How the seedlings do after that is a different story, but for sprouting I think temperature plays a huge part in it.  I start my seeds in a protected but not climate controlled spot.  Even with a heat mat for those that need it, I find that some seeds are slower to start than on the package or when direct sown at the appropriate time.  And then there is seed age, too. I am always trying to start older seeds.  Frustrating, usually, but surprising results sometimes...
show more
8 months ago
organic
Is it too late to start kentucky wonder pole beans and english snow peas?
Kentucky Wonders grow and produce all season long for me here in 7b.  They don't seem to mind the heat and humidity although they are planted in less than full sun so maybe that helps.  Snow peas hate me, so maybe I'm not the best to give advice, but there seems to be a very small window for planting where I can get a little harvest before they shrivel up and die in the heat.  I can't seem to find that window, though!
show more
8 months ago
plants

Small farm buildout
I hear you on the trashy Sweetgum. I have turned a lot into Shitake mushrooms myself.  I did a little experiment with lion's mane a few years ago and it wasn't successful.  They were small diameter logs, maybe 2-4".  I am interested to hear if the larger diameter logs might be successful.  Oysters also have done well for me on gum, but I don't use them much since the bugs and squirrels always get to them first.  The logs also were much shorter lived, partly because the squirrels liked to rip the bark off.  This was especially true of oysters on yellow poplar...they just peeled the bark right off!
show more
10 months ago
small farm

Monthly Food Forest Tours! Let's create a food forest together!
Hey Steve, love seeing your food forest. Looks a lot like home.  Strange weather we are having in these parts this winter. Normally the shiitakes have long since gone to sleep, but they don't know what to do this year!

show more
10 months ago
forest garden
Timing your garden for pickling/canning
I grow Boston Pickling cukes and they produce over a long period, like 2-3 months so I make pickles 2-3 a summer with a somewhat flexible recipe to use whatever else I have to throw in.  I've never had much success with other cuke varieties so I don't know whether that range is unusual or not. They grow in a shady area of the garden and I've been saving seed for a few years so maybe that has something to do with how they grow/produce.  Like some others, I will use whatever part of the dill the plant can spare- stalk, ferns, flowers, seed head...
show more
10 months ago
gardening for beginners