What bricks to use for a simple rocket stove?

posted 1 year ago
My son's been enjoying videos about brick rocket stoves, like this:

And, well, there's no school so now seems like a really great time to learn about fire science! And, it might make a nice back-up cooking source for summer use (we have a woodstove inside for cooking during the cooler months, but I sure wouldn't want to cook on that during the summer!).

What bricks should I get? A lot of the rocket stove videos have short rocket stoves...I'm wondering if it should be taller like the one Jennifer is using at last years ATC (center picture. I don't remember where I saw the original, but don't really want to spend an hour searching for it!)

Thanks so much for your help!

posted 1 year ago
That's wonderful Nicole that your son has gotten infected by the rocket stove bug!

A lot of the rocket stoves on YouTube are made from cinder blocks or regular cement bricks that will work just fine for a beginner level experiment to see how one works. Its fast, cheap and you can take it all apart when your done if the fad wears out and use them somewhere else. Cement doesn't like high temperatures for long term use though (they will spall - basically break down and crumble apart)

A better brick though would be one made from clay. Home Depot often carries them. Sometimes if your lucky, they can also be found for free in the classifieds. The soft red clay bricks (you can use them like chalk on the sidewalk) would be the ones to look for. These were the original rocket stove bricks used by Ianto Evans that got a lot of the rocket stove information out there.

By the looks of it, the ones Jennifer is using in the photo are special refractory bricks made for wood stoves and kilns. Some are dense and heavy (perfect for holding heat in a pizza oven) while others are light and insulative to reflect the heat back to make the fire burn even hotter and very clean. These ones are much more expensive unless you can score a deal like Thomas & Paul did (from the same source).

If you really want to delve into the different kinds of bricks, I know Erica Wisner made a post a while back describing all the various bricks out there and a description of each. I'll include a link when I find it for you.   Happy building!

EDIT: Here it is. Probably more info about bricks than you never thought possible: Fake-fire-brick

Silence is Golden
For all your RMH needs:
dragontechrmh.com

take a beatup pickup truck and tell them you do firebrick projects using 4.5"x9" brick.....you'll get the cheapest firebrick in the Portland area I could find.....around $2 per brick if I remember correctly

Tobias Ber
Posts: 525
Location: Northern Germany (Zone 8a)
25
posted 1 year ago
if you have that kinda soil: you can make adobe bricks. Or you can make a form and create rammed earth blocks

Or you could build the whole thing from cob or from rammed earth. That would require protection from rain. But that would make a project with "stacked functions of learning" (I assume that you re doing this with children?).

As first experiment you could try to use 4"+ tin cans and throw some clay-rich-soil about it. See if it cracks. If yes, add chopped hay or straw and/or sand.

just experiment, it won t have to be perfect.

posted 1 year ago
I finally got a chance to update this! My husband picked up 24 bricks, and we spent more time moving the bricks than we did assmbling it. It's a nice quick project! I do think that 28 or 32 would be better, especially if I could make a bigger entrance hole to get more airflow. The bricks were $0.33/brick, which made this cost about $16. That's pretty affordable! We used one of our woodstove trivits to elevate the pot. I'm sure a oven burner would have been better, but I had this lying around, and it worked! 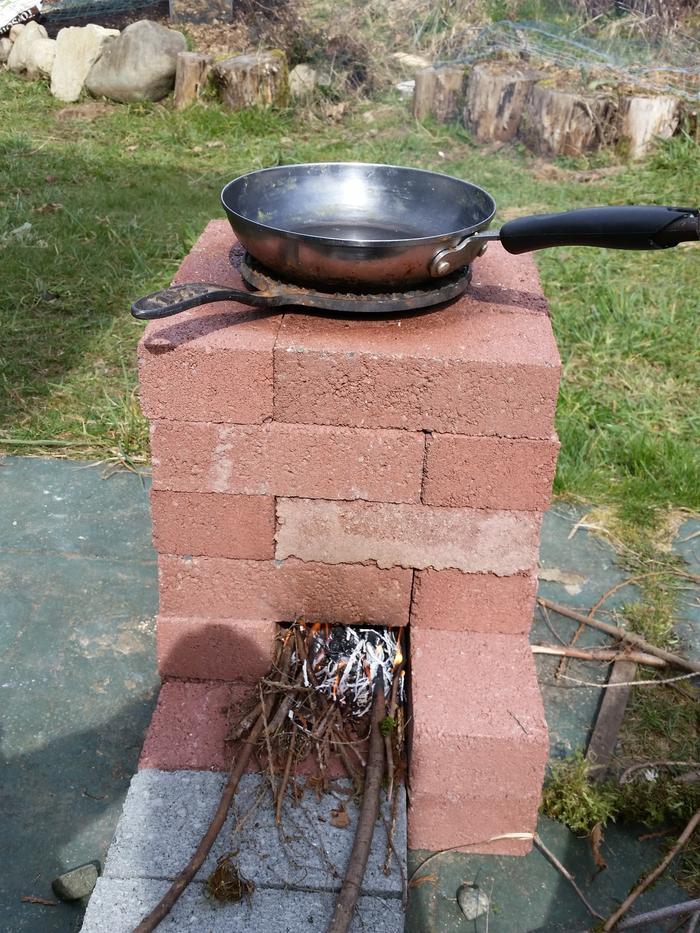 Pile of sticks that cooked 4 eggs and boiled 4 cups of water. 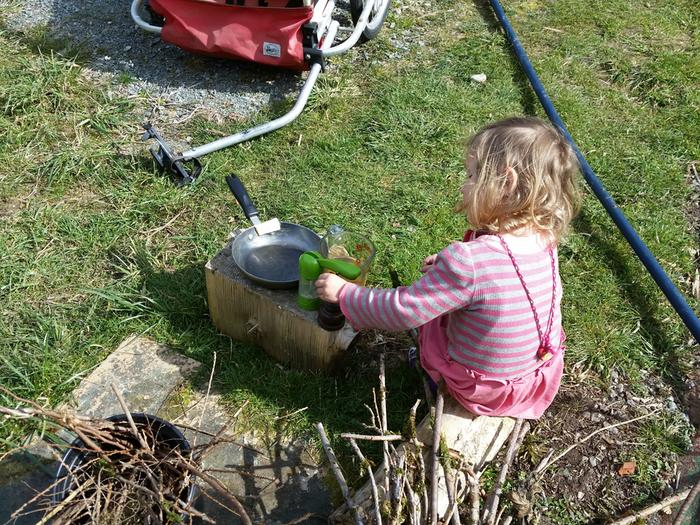 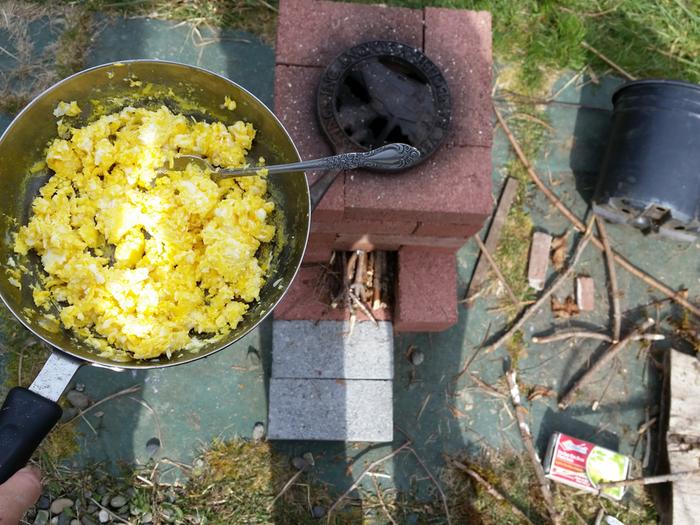 My son enjoyed talking a video of the stove while we were boiling the water.

It seemed to have limited airflow. If the wind was blowing (like the next day, when my kids asked me to cook on it again), it smoked a lot and didn't burn as hot or efficiently.

Still, for about $16, this was a pretty affordable way to cook in a power outage!

posted 1 year ago
I was smiling the whole time watching your video. A young rocket scientist in the making.  A nice end to my day. Thank you.  💖

Silence is Golden
For all your RMH needs:
dragontechrmh.com

A suggestion, if you would like to try it: Make that opening for feeding the fire twice as high and put a grate half way up the opening to support your fuel. (the grate goes between the bottom and next layers of bricks) Only feed fuel above the grate.

This would ensure a dedicated airway flowing under and up through the ends of your burning sticks, let it run hotter, and should clean up your exhaust.
Nicole Alderman
master steward

posted 6 months ago
In the end, that's actually what we did! We also made it a bit taller at the top. It works a whole lot better now!