Merit Badge info
Forum Moderator
Gerry Parent currently moderates these forums:
Live with a small community of people out in the back woods of southern BC, Canada.
No cell phone, TV or car. Instead, I have a walkie-talkie, the internet and a tractor.
To keep warm I have a Rocket Mass Heater in the shop which I love to tinker with....often.
Westbridge, BC, Canada
Apples and Likes
Apples
Total received
224
In last 30 days
47
Total given
202
Likes
Total received
1157
Received in last 30 days
208
Total given
1117
Given in last 30 days
242
Forums and Threads
Scavenger Hunt

Stuck Pressure Canner Lid!
The hacksaw trick sounds like it would work but before going to that stage, have you tried removing the gauge or the over pressure valve to make sure there is no pressure inside which may be keeping that pin engaged?
show more
1 hour ago
food preservation

Video on the building of a cob chicken coop
I was a bit surprised when you didn't put a wooden header or an arch above the window but rather just a big gob of cob. I guess because there is not a lot of weight above it and if you don't get much (or any) snow load it really doesn't matter. 5 years sure is proof though!

EDIT -  BTW, your chickens sure look like they appreciate your hard work!
show more
16 hours ago
cob 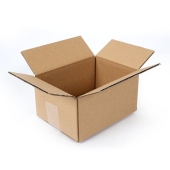 
source
show more
16 hours ago
meaningless drivel
Uphill water pump recommendations
Hi Dan,   If transfer rate is not an issue like you mentioned then have you considered a ram pump? Probably one of the cheapest ways to move water uphill although it does have some particular parameters that its needs to operate effectively. There is so much information about them, it would be best just to do a basic web search and see if it falls within your needs.
show more
1 day ago
rainwater catchment

Oh boy! A rocket sauna sounds awesome. Definitely on my pre-bucket list so you can bet I'll be your shadow to watch your progress.

I've seen the pet kiln video many times (another thing to try). The only thing I can think of is are you getting your fire hot enough?

EDIT: A link to the Rocket Sauna brainstorming at Wheaton Labs:  Wheaton-Labs-Rocket-Sauna-Build

Someone else is sure to chime in with experience. In the meantime, I'll add your question to the rocket stove forum to get you a bit more exposure to the folks over there also.

J tube to Batch Box Conversion
You got it Jay! ...and a little side note on that door: It was a piece from one of my original rocket stoves. A P-channel I think.
An archeological dig through my scrap metal pile and found it.
It was even exactly the size I needed with tabs and all! It all came together so naturally I don't think I could have planned it that well.

J tube to Batch Box Conversion
The other day I had the opportunity to get 2 more finishing touches on my rocket.
The first was to install a small metal door to control primary and secondary air flow.
EDIT: Peter van den Berg has suggested to me earlier here that air flow should be either open or closed and not inbetween. So when I say controlling air flow, I mean a way to open the air port fully so that the burn has plenty of Oxygen to burn clean and hot and closed when the fire is down to coals only and don't want to push any further heat up the chimney, but rather keep as much of it in the mass for it to absorb. 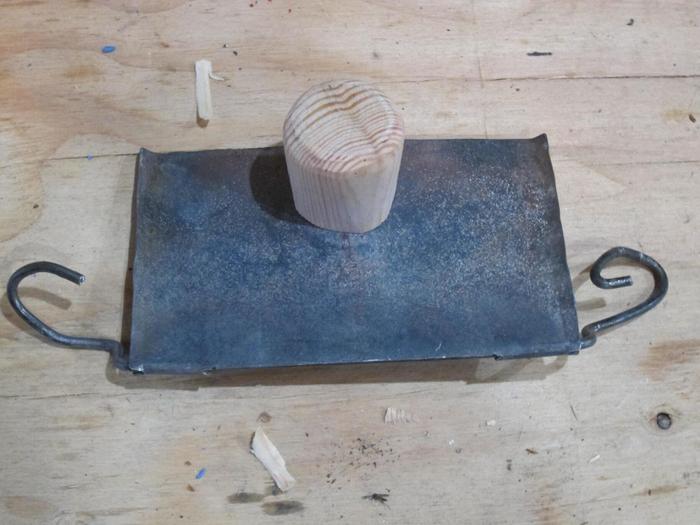 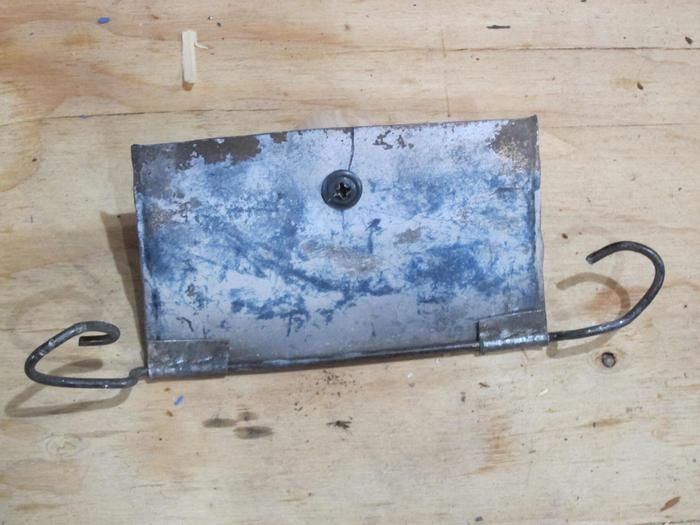 The metal was from a skin off a hot water tank and the wire from a coat hanger - Remember a time when they were metal and not all plastic?
Carved a slot in the cob on either side of the air opening, then bent the coat hanger to get lots of surface area for the cob to grab and hold the door in place. 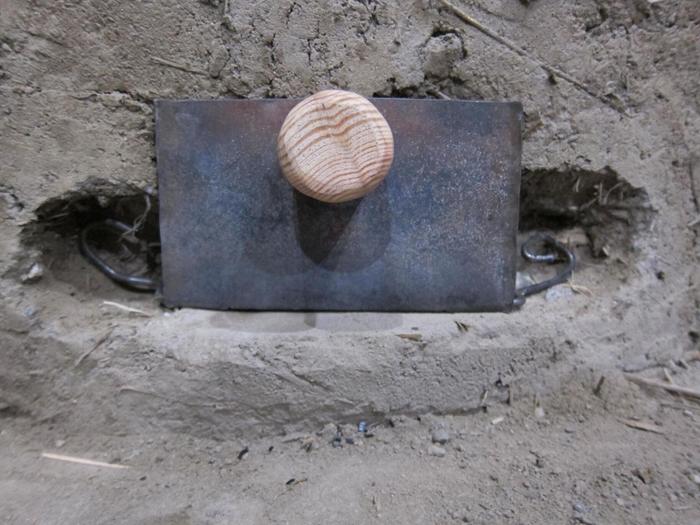 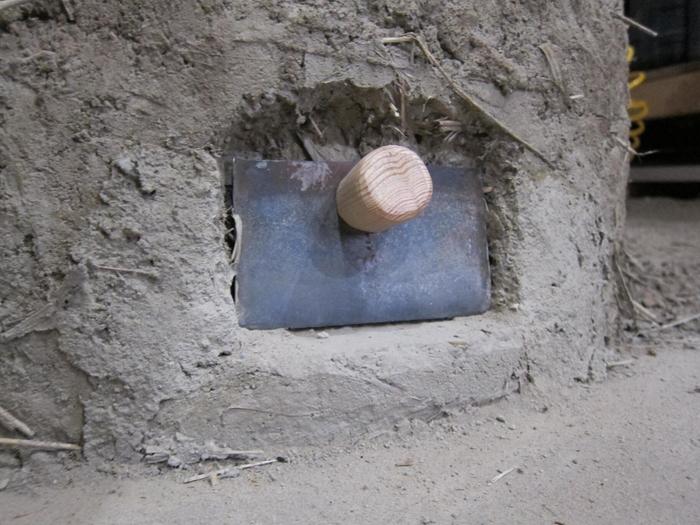 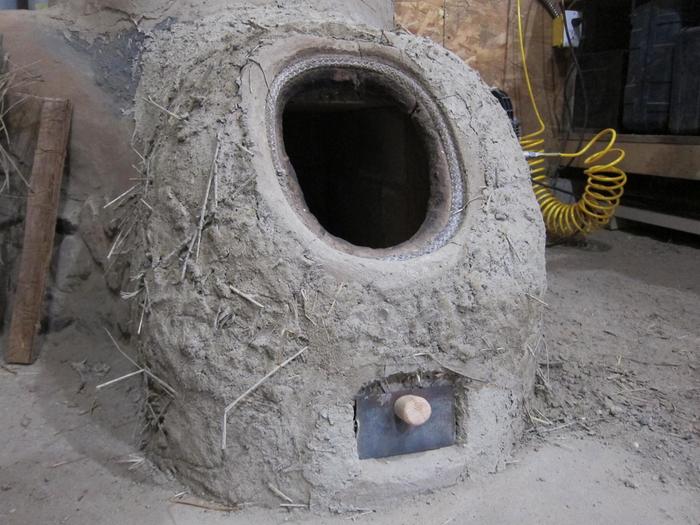 The second finishing touch was the final plaster layer to finish up the firebox. I used about a 3 sand to 1 clay ratio with cattail fluff and a little bit of wheat paste as my recipe. After drying, it turned out quite hard and not chalky. I went with a more rough look using my hands to smooth the surface which tends to lift the sand up a bit like a wooden trowel does rather than a smooth finish like a steel trowel does.
Feels more rustic and homemade to me for this particular project. Was thinking about putting designs and stuff on it (possible future inspiration), but for now, plain-jane she is. 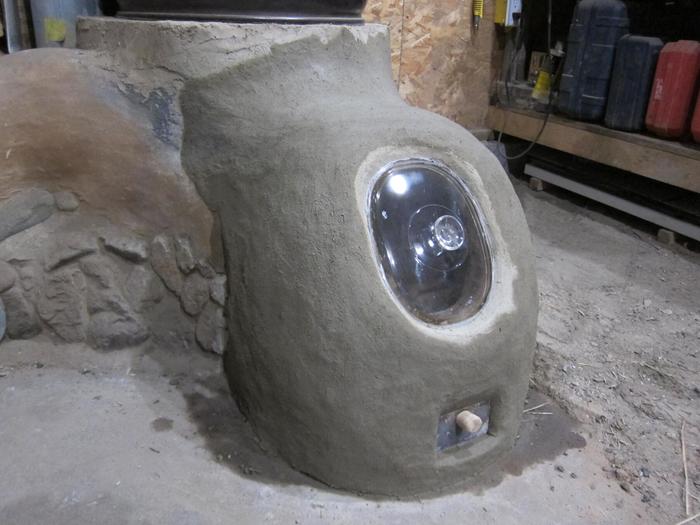 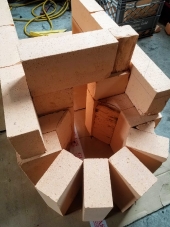 Mocking up my new batch box core
Big boy training wheels. We understand its hard to stay in the lines when your a mad scientist and not an engineer!
show more
3 days ago
rocket mass heaters