What is the Difference Between a Fruit and a Vegetable?

posted 2 years ago
Some vegetables that we eat are really fruit.  An example is the tomato.  It is commonly used as a vegetable.

So what is the difference between a fruit and a vegetable.

Can you tell me the names of other fruit that are usually used like a vegetable?

Stacy Witscher
pollinator
Posts: 856
Location: Southern Oregon
238
posted 2 years ago
The difference depends on what criteria you are using to evaluate, botanical, culinary or nutritional. Roughly, botanically, fruit contains seeds and isn't something else. Culinary, if I'm remembering correctly, a fruit is primarily consumed as a snack or dessert. That's a very old definition. And nutritionally, a potato, although obviously a vegetable, is eaten as a starch, like a grain. And then there is weird stuff like avocado and peanuts.

posted 2 years ago
This is a pet thing of mine and I refuse to answer it any more.

If anyone tries to bring it up I tend to go make myself a nice salad.

Tomato, cucumber, sweet peppers and olives usually do the trick.

Then a rhubarb crumble to really piss them off.

posted 2 years ago
Everything but the botanical definitions are largely subjective. If it has seeds, it's a fruit.

The culinary and nutritional perspectives have a lot of overlap, but what food items you choose, in my opinion, should have more to do with taste combinations and nutrition than whether or not they have seeds.

The correct answer is, if it has seeds, it's a fruit. I don't see why this is difficult for anyone, unless they're trying to make sweeping generalisations about fruit.

EDIT: Oh, and avocados aren't wierd, nor are peanuts. Avocados are clearly berries (drupes), and peanuts are legumes, as they grow in a pod (shell), and while not always, most varieties have multiple nuts in one pod. (I know, it's not clear, per se, but it is accurate).

posted 2 years ago
I thought this would be an interesting question with interesting replies.

Thanks everyone for sharing.


Things like apples, oranges and berries are easy to figure out that they are fruit even though they do go well with vegetables in different ways. I really like salad with fruit in it.

Avocados and peanuts are interesting and I never thought of them.  I would guess avocado is a fruit used like a vegetable.


What about squash, zucchini, cucumbers and eggplant?


Here is a video about the differences:

posted 2 years ago
And then there is European law that dictates how much fruit must be used to make jam.  And, therefore, that a carrot is a fruit because carrot jam is awesome and couldn't possibly be legislated against.

And no way do I accept that peanuts are fruit.  Just no...

posted 2 years ago
...which is why peanuts are legumes.

posted 2 years ago
I ran across this article the other day that make me think of this thread:

14 vegetables that are actually fruits

We all know that a tomato is a fruit that is used like a vegetable.


The most famous example is probably the tomato. Its status as a fruit or a vegetable was so contentious that in 1893 the Supreme Court had to weigh in and settle the issue once and for all.


It's that logic that prompted the Supreme Court to declare in 1893 that tomatoes should be taxed like other vegetables.

So what are the other 13 that are also a fruit?

Every kind of pepper, from the bell pepper to the jalapeño, fits the bill as a fruit and not a vegetable.

Anyone who's carved a jack-o-lantern for Halloween knows that pumpkins are full of seeds. Pumpkins and all other gourds are technically fruits, not vegetables.

Speaking of gourds, cucumbers are an unexpected member of that family, too. Will you ever look at pickles the same way again?

Technically, peas aren't the fruit here, but the pods are. That's because they contain the seeds — the peas — that the plant uses to reproduce.

That's right, one of America's favorite vegetables is really a fruit in disguise.

Not only are eggplants fruits, they're technically classified as a berry.

Packed with fiber, potassium, and vitamin C, okra is one of the most nutritious fruits out there.

You probably don't think of olives as a fruit, but that's exactly what they are. Specifically, they're considered a stone fruit, like peaches, mangoes, and dates.

Although it doesn't seem like a fruit, avocados are actually single-seeded berries.

Those kernels are the seeds that corn plants use to reproduce, so that qualifies corn as a dry fruit.

Zucchinis are a member of the gourd family, meaning just like cucumbers and pumpkins, they're considered a type of berry.

Just like peas, beans are a member of the legume family — they're seeds that come in pods, and that makes them fruit.

Another common legume is chickpeas or garbanzo beans. We usually don't see them inside their pods, but chickpeas are classified the same way as peas and beans.

Did some of these surprise you?  They surprised me. 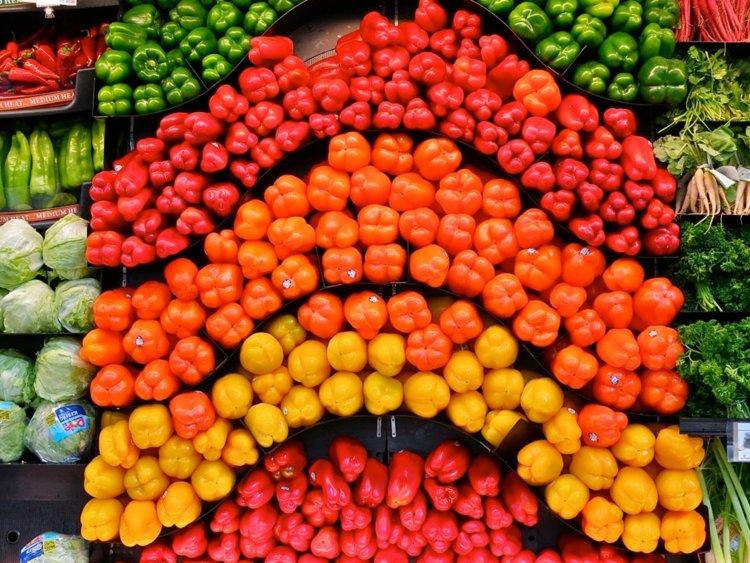 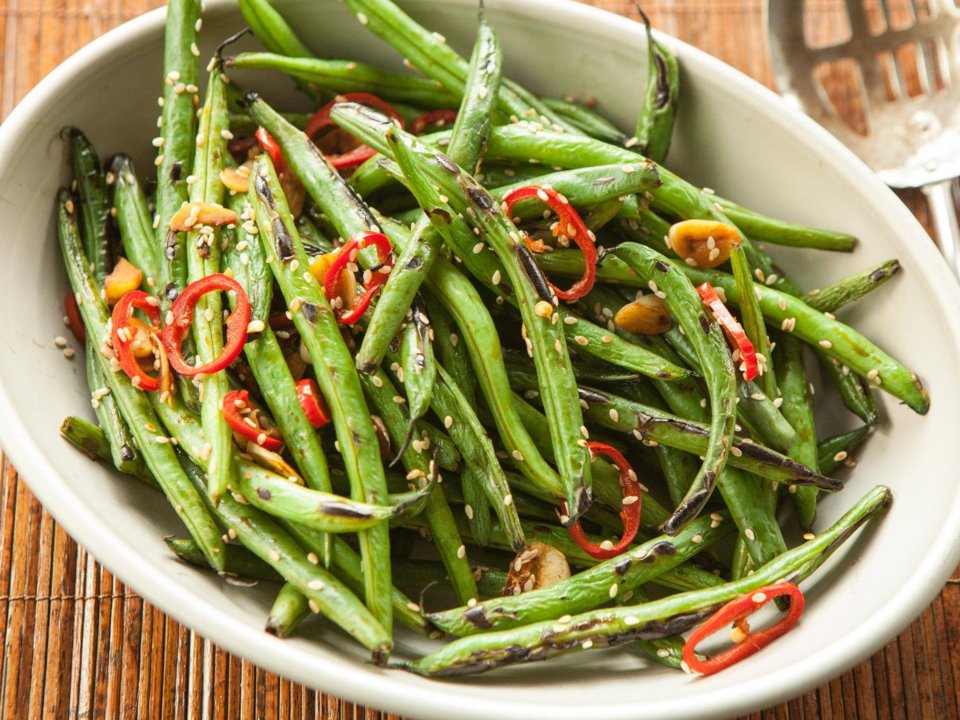 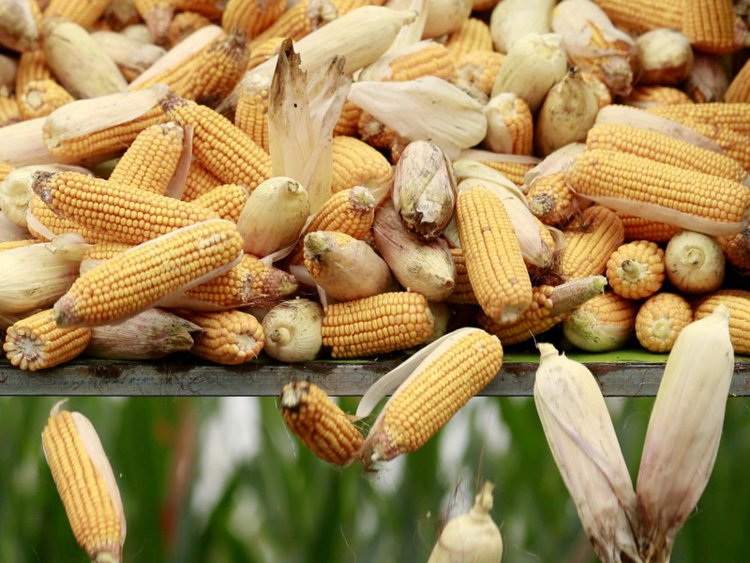 posted 2 years ago
Yeah, pretty sure corn is a grain. And, if what Chris says is true, and peanuts are a legume, one can assume that legumes are NOT fruits...and therefore peas and beans are not fruit.

But, yeah, squash, egg plant, cucumbers, etc are all fruits.

Rhubarb is a vegetable.

Aren't grapes berries? They are, but blueberries aren't, and watermellons and bananas are


The scientific usage of the term "berry" differs from common usage. In scientific terminology, a berry is a fruit produced from the ovary of a single flower in which the outer layer of the ovary wall develops into an edible fleshy portion (pericarp). The definition includes many fruits that are not commonly known as berries, such as grapes, tomatoes, cucumbers, eggplants, bananas, and chili peppers. Fruits excluded by the botanical definition include strawberries, raspberries, and blackberries, which are aggregate fruits; and mulberries, which are multiple fruits. A plant bearing berries is said to be bacciferous or baccate.

posted 2 years ago
A vegetable is a plant or the portion of a plant used for food. So whether it is a legume or fruit or berry or tuber, it is a vegetable. As a child, I told mother that ment that chocolate and sugar are vegetables.
Anne Miller
master steward

posted 2 years ago
When I was posting that article I was wondering where the author got this information and was that info accurate?  Anyway, it is a different perspective.

posted 2 years ago
Again, the fruit part of a plant cannot, by botanical definition, be a vegetable. If we are eating vegetables, we are eating the vegetation, and not the parts resultant from the flowering.

The fruit is formed after flowering and pollination occur, usually to either create a nutrient-rich casing that decomposes around the seed(s), providing fertilizer and a draw for soil life, or more often to attract animals that eat the fruit, either removing and scattering the seed while the fruit is being consumed, or ingesting the seeds and pooping them out in other locations in fertilizer piles of their own.

If the part being eaten grows before flowering, or if production of what's being eaten can be extended or improved by pruning off flowering bits, that's a good indication that it is vegetable.

If the part of the plant consumed wasn't directly a result of a pollinated flower, it's not a fruit.

If you're eating the roots, shoots, stems, or leaves of a plant, even if that plant can be grown out to produce fruit, you're not eating fruit.

So apple bark isn't a fruit, nor are apple leaves or apple roots.

There are further distinctions to be made, but this one is relatively easy. If it's got seeds of any kind in the part being eaten, that part is a fruit. If it is biologically supposed to have seeds but has been bred to be seedless, it's still a fruit.

EDIT: I removed some of the repetitive emphasis. The OP's question asks what the difference between a fruit and a vegetable is. There is a scientific definition. If I have any part of it wrong, I would be thrilled for someone to enlighten me.

A good example of a plant family that produces both fruits and vegetables are Solanaceae. Potato and tomato vines can look similar, but we eat the tubers of the potato, which are vegetable. The potato plant also produces a fruit, containing seed, which is inedible for humans. At least, I have never heard of them being eaten. Tomatoes have no such root structure, and no part of the plant is edible until the flowers are pollinated and the fruit develops and ripens.