I am wondering what it would be like to build hinged insulated window covers to  close over the windows and what possible problems i could encounter.

They will be 2' wide windows and i was hoping to make a frame and put some rockwool into it, than be able to close the cover when the window is not in use. or at night. any problem i will encounter with mold/condensation issues?

The windows will be most likely double pane. And the walls are going to be 2x6. so i can most likely put 4" of rockwool into the covers .

It is a privilege to live, work and play in the traditional territory of the Salish People.
Better wood heat! -- 177 Hours of PDC and ATC! -- Mike Oehler's Low Cost Underground House!
All about Permies, including Tutorials -- Raven Trust

posted 10 months ago
Will they be on the inside or outvside?

We live on Blue Planet that circles a ball of fire. Our Planet is circled by a Golden Moon that moves its oceans. Now tell me that you don’t believe in miracles....Unknown

posted 10 months ago
I dont see any problems, other than the rock wool getting wet.
You could think about using sheets of expanded foam that is often thrown out.
Water will not reduce its effectiveness.
And its rigid which may help in the construction of the frames.

posted 10 months ago
I had an interesting discussion about this with my son in relation to a small green house and whether the cover should be on the inside or the outside and I learned a lot - I guess that money spent on his engineering degree was worth it!

1. If you're trying to keep the inside warmth from escaping, you want the cover on the inside. In moderate temperatures, at night, with a decent seal, this should be fine. However, if you don't open it in the morning and the sun hits the glass, bad things can happen - yes condensation that froze in the night will drip down to wherever it can get to - possibly the window could break due to increased stress or less ability for the glass to expand and contract ( I just read a post about that happening in the bad heat wave we've had, but I can't remember where exactly).

2. If you're trying to keep the heat outside from getting into the house, you would need the covers on the outside - like the recent heat wave.

I think a lot depends on the style of the windows and what they're made of. I know that our house in Ottawa had outside sills that tilted down away from the glass to keep water from pooling or seeping in. Our current house has metal frames and no thermal break (yuck, but they were here when we bought) and in the west coast style of no sill at all - the glass is in the same plane as the wall. Both my sister and my mother's houses have had issues with condensation, but they put absorbent cotton pads at the corners and check in the morning in case they need to be squeezed out. I would love to have a better system in my current house but having always thought in the past that "outside" was the way to go - because traditionally that was how it was done, now I'm less sure. On the other hand, anything is likely an improvement over nothing!

Douglas Alpenstock
pollinator
Posts: 2281
Location: Canadian Prairies - Zone 3b
573
posted 10 months ago
I assume the window would be part of the waterproof exterior envelope, so the insulation panel would be inside.

Tough call. Whatever insulation you choose, I think it should be a moisture-proof sandwich. An unenclosed wall insulator gets messy otherwise, and transmits interior moisture to the cooler window.

Don't discount the value of a tight weave, breathable curtain that can cover the window and form a semi-seal. It slows the moist interior air from contacting the cool glass. IMO it punches way above its weight in terms of practical R value.

Also: don't discount the value of the Reflectix stuff, overpriced bubble wrap with reflective aluminum on both sides. RV and rough camping people love it for their vehicle windows. I just put a swipe on a long skylight at my place, interior side, because it was turning the kitchen into a barbecue ... and I was the meat.
max cottrell
Posts: 52
8
I like...

posted 9 months ago
I'm having the same quandary. Our windows, all 16 of them are from the early 60s, single pane. Too many to replace. And they all face northeas; super hot in summer, super cold in winter.

I'm doing two things that may help you. First, I'm putting that shrink film stuff inside on the ones I never open. And I'm building covers for the outside that are 1/4 inch plywood, a layer of Reflectix, layer of plywood (heat out), then for heat in, I'm using arctic sleeping bags opened up as curtains inside.

The outside panels, I'm using door hinges and wall flag poles ( the kinf the flagpole slips in to). Shades in the summer,  pop the hinge pins in winter for themal heating. Just slip in a pipe to hold it open, remove to close.
max cottrell
Posts: 52
8
I like...

posted 9 months ago
If you don't want to use the hinge and flagpole idea, you can also use what are called "hanger bolts" which are woodscrew at one end and machine threads at the other. That way you can hang them instead of swinging them up. Personally, I like the swinging them up as sunshades. And they make a driver bit just for them - thread the machine side into the driver and it's sets the hanger bolts easy as pie. I've got a ton of these things - they're great around the place for hanging just about anything. 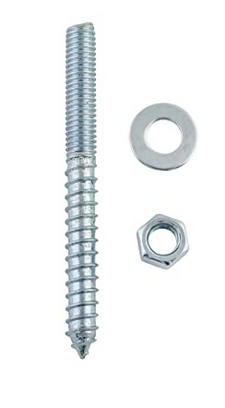 posted 9 months ago
They have a plastic film you can apply to the inside of the windows for the winter, but that would make it difficult to open them if needed. My bedroom window as a kid was aluminum and the condensation on the inside would freeze during the winter.  Dad made a 1x4 wood frame and covered it with clear (clearish) plastic film and screwed it to the outside of the house.  This stopped the frost inside the window.

When in doubt, doubt the doubt.

posted 8 months ago
Well, last week I started playing around with window covers that double as awnings using 3/8 exterior plywood, painted the same color as the tiny home (aka The Shack). I started with one that is as wide as two windows (this was a sun porch with 16 windows) using my hanger bolt idea.

These are, of course on the outside as a way to stop the interior from heating up in the summer - all those windows and the solar heating, it gets hot inside even with the fans. I'll note that for the inside insulation for the windows, I use arctic grade Walmart cheap sleeping bags - they're dark green and really do work well. In our circumstance, they cover 3 windows each.

The hanger bolts themselves worked great! Once I got the measuring figured out the whole system worked after a fashion. The trouble is that the two window version is heavy. So, next week, I'll cut them down to single window size and use 2 x 2s to hold them open when they're used as awnings.

No pics as yet because this is all just an experiment so far.

Another aspect of this has to do with lateral force. Taking my situation as an example, you would think that using the prop to hold them open would be good if you put one end on the window sill and the other on the awning. That angle creates a lot of forward (away from) force that pulls the awnings away from the building - after a while that would cause undue wear on the wood, bolts and window frame. So, having the support going at a 90 degree angle from the awning will reduce the lateral force to 0. The smaller the angle, the more force is exerted, the closer you get to 90 degrees, the less force. If you want to drive the awning towards the windows, an angle of greater than 90 degrees would be used.

Here are Very Informative and well documented older books found used online which have much detailed information and photographs for this subject. Many of these books include the wonderful ways already spoken of in this thread:

Movable Insulation--A Guide to Reducing Heating and Cooling Losses Through the Windows in Your Home. by William K. Langdon. 1980
Including Insulating Options for windows, glass doors, skylights, greenhouses and solar hot water heaters
More than 300 pages. Langdon traveled around the US during the late 1970's Energy Crisis, visiting folks' homes to document their solutions.
https://duckduckgo.com/?q=william+k+langdon+books&t=brave&ia=web
https://www.amazon.com/s?k=movable+insulation+langdon&i=stripbooks&ref=nb_sb_noss

Casa Del Sol from 1981. by William Lumpkins
Lumpkins began building passive solar homes in New Mexico(?) in the 1930's. and came up with some genius ways to cool and heat homes.
https://duckduckgo.com/?q=casa+del+sol+william+lumpkins&t=brave&ia=web
(the free pdf. link looks like a scam.)

Numerous books by William A. Shurcliff in this link:
https://www.amazon.com/s?k=william+shurcliff&i=stripbooks&ref=nb_sb_noss_2

posted 8 months ago
I love Kume curtains.  Simple to make yourself, inexpensive, and they seem to work very well.  Instructables - Kume curtains