How to bury a friend
I buried my dog in my food forest. He is in a guild under a large pile of stones. Many, many types of plants are planted near him. I visit him often. Sometimes I still cry when I do, but it's okay. His mother's ashes will be there soon, along with some of my baby brother's ashes when I have the strength to do it. My own burial spot is picked out there as well. I like the idea of being buried there with my family and creatures I loved very much, among the trees and plants I planted and grew there.
show more
10 hours ago
chickens

Our new henhouse -- a diary of progress
I haven't tried Icelandic chickens yet, but I hope to sometime.  I'm picking up 12 hatching eggs for Russian Orloffs in a week.  It will be my first time trying those as well.  I just got 6 Turkens and 4 Partridge Rocks a little while ago.  Turkens are really wonderful birds if you have never tried them.

If I'm successful in hatching the Orloffs, I'm sure to have roosters as well.  I would be happy to trace an Orloff or two for Icelandic roosters if you would be interested.  If you are planning to keep a specific breed, I understand that as well.  I like to have a bunch of mixed breeds chickens around because I find them interesting and you end up with some really fascinating looking chickens.
show more
1 day ago
projects

Our new henhouse -- a diary of progress

Trace Oswald wrote:If you can work it in, I would put vents on either side near the top....you could make a simple piece of siding to fit over the vent holes with some overlap and a couple hings.  A little weather stripping would kill any drafts.  Just a thought.

Just to be sure I'm on the same page with you, you're suggesting a screened window that I open for the summer and plug up for the winter. Yeah?

I've been wondering about stuff like this since most of the online advice for coop-builders (from people to our south) is that you can't have enough ventilation.

That is exactly how I would do it.  I would use hardware cloth since it's very sturdy against predator attacks, and then just swing a hinged piece of siding down over the vent for winter.  I agree with people that say more ventilation is better.  My birds are much healthier and happier now that they have a lot more fresh air.  Good ventilation and your deep litter floor should make very healthy chickens.  As I mentioned in a post somewhere, I never water the chickens in the coop in the winter either.  My goal is for the coop to be bone dry in winter.   In summer with all the vents open, watering in the coop seems to be fine if you find that is easier.

Keep in mind, I'm no expert, just a guy that wants to have happy, healthy chickens.  I think your coop is going to work great.  Any idea how many birds you will keep?
show more
1 day ago
projects

G Brent wrote:So this is a design for a geothermal windmill that I've been working on and am in the process of building/testing.   I thought I would open source this and share it with all of you.  I'll try to document things as this project develops.

THE IDEA:
The idea is for a home sided windmill system that would always have wind 24/7. Cold air moves to hot air so we want to capitalize on that differential as much as possible.  The greater the difference of temperature the more wind will be created and the faster a windmill/turbine will spin. The earth and sprinkler mist and evaporator cooling will cool the air as it piped through the ground in 3 stages.  I'm hoping it will cool the air down to around 0 C(32F). Then it will encounter Fresnel lens/fire heated rocks/sand bed(heat sink bank) that will super heat that air to around 260 C(500 F) and provide suction through thermal convection of the air. Turbines will be placed between ground and the heat bank as well as in the convection pipe above the heat bed.  Here's a diagram to help understand.   I would love to hear you input on this design, I haven't seen anything like this.  I have a couple engineers helping me on this project with the math and such, but I'm totally open for other building this system as well and testing it. What do you guys think?

It's a cool idea.  Some thoughts that may or may not be valid.  I'm not sure you need the fresnel lens at all.  If you do, maybe focusing it higher on your tube, on the tube itself would draw the air through faster?

You said 24/7, but at night when it gets cooler outside and the sun goes down, won't the air flow stop, or you're planning to keep a fire going all the time?
show more
1 day ago
alternative energy

Our new henhouse -- a diary of progress

Trace Oswald wrote:For our climate, I would be very cognizant of two things.  Good ventilation and no drafts at all where the chicken will roost or nest.  Can't wait to see your progress!

We're cladding the walls in OSB and wrapping in off-brand Tyvek to halt drafts. My preliminary designs says that short wall will be entirely open. (I mean, screened with hardware cloth). But I'm trying to make everything other than the front opening tight. I hadn't planned on Tyvek, just paint and caulk, but Paul convinced me.

The footprint is about 14' wide by 16.5' long. It's not as long and thin as I'd prefer, but I'm hoping it works. If there's too much open at the front, I can end up sheathing over the outside edges of that wall.

It looks great.  I think the Tyvek is a great idea.  If you can work it in, I would put vents on either side near the top.  The slope of the roof may cause heat issues in the high area in summer.  Window glass is very cold to sit in front of, but you could make a simple piece of siding to fit over the vent holes with some overlap and a couple hings.  A little weather stripping would kill any drafts.  Just a thought.
show more
1 day ago
projects

Our new henhouse -- a diary of progress
Looking forward to seeing the build.  What kind of coop are you building?  For our climate, I would be very cognizant of two things.  Good ventilation and no drafts at all where the chicken will roost or nest.  Can't wait to see your progress!
show more
1 day ago
projects 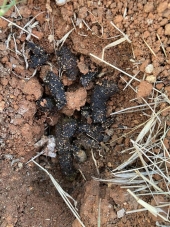 Who visited my food forest?
Could you set up a game cam in the area?
show more
2 days ago
predators

Who visited my food forest?

I can tell you with 100% certainty that this doesn't work at my house.  My chicken coop is also literally 5 feet from my dog kennels and the smell of dogs/dog urine and the sight of dogs going crazy trying to get them has no effect either.  I haven't lost any birds this year until one night a few weeks ago when I was an hour late getting home to lock the birds up.  Raccoons had killed 6 of my 11 birds by time I got there.

And yes, that looks like raccoon scat to me too.
show more
2 days ago
predators

We were robbed :( Crowdfunding

thomas rubino wrote:Wow, Trace what state are you in?

20 years ago things were like that around here.
And for quite a few of us it still is.
However, with the influx of new folks around things have changed.

As an example our Justice of peace.   He had a fenced backyard.
He owned a male heeler-type dog. It, as most heelers are known to bite strangers or anyone walking away from one.
He had signs up warning beware of the dog.

The burglar must not have read the sign...
The dog bit the crook extensively as he was attempting to climb thru a  window...
Police were called, and the man was taken to the doctor and then booked in jail for attempted robbery...

The lawyer for the crook promptly sued the JP for damages, pain, and suffering as well as mental "trauma" from the scary bad doggy... Doing his Job!
They won their case.
By having the signs up saying beware of the dog, he was admitting he knew his dog would bite.
It cost him a pretty penny to make that go away!

This sue happy mentality is not making the world a better place.

I'm in rural Wisconsin.  I'm sure in cities, even towns, it's more like you describe.  Out here in the sticks, not so much.

My sister works at a law office and we discussed this a few times.  Generally, if you put up a "Beware of Dog" sign, it's just as you say.  You knew your animal would bite, and so your burden of making sure it is contained in a safe space becomes greater.  If you put up signs notifying people you have a dog, or dogs, working your property, it's easier to argue you just wanted people to be informed in case they are afraid of dogs, uncomfortable around them, etc.  I have heard of similar instances to the one you mentioned.  I've also heard about thieves coming into your house, slipping and breaking their leg, and suing the home owner.  It shocks and amazes me that there are judges that let shit like that fly.  I like to think it doesn't happen often, but the world we live in is changing.  I can see it now, even if your dog doesn't bite, he barked, scared the burglar who then tried to run, fell and got hurt, and you're still liable. I'm too old to worry about it.  What will happen will happen I guess.  Meanwhile, I feel much safer and more secure with my dogs protecting us.  You make a good point though, and people should be aware of all possible consequences.
show more
2 days ago
crowdfunding

We were robbed :( Crowdfunding
Add another vote for at least one good, and preferably large, dog.  I went a little different route than Thomas, I have dogs that will absolutely bite you if you come on my property uninvited.  I have signs up to hopefully keep anyone from being bitten, and to keep from being sued.  My signs say things like "Livestock guard dogs on duty", and "DO NOT leave vehicle without escort".  I also live in a rural area where, if you are bitten by someone's dog, people are likely as not going to say "what did you do to the dog?"  People here believe in and respect your right to do as you wish on your property for the most part.  If you are on someone's property uninvited and get bitten, you won't get much sympathy generally.  This varies very much from place to place of course.  I have no idea how people in your area feel about this.
show more
2 days ago
crowdfunding