posted 1 year ago
Cool rock Trace!  How big is it?

posted 1 year ago
It's not big. About 10 inches long and 7 inches or so wide. Bigger would be better but then it may not have fit in my motorcycle saddle bag 😁

Jim Fry
Posts: 307
Location: Stone Garden Farm Richfield Twp., Ohio
24
posted 1 year ago
Many years ago, Twylah Nitsch and her Mother and Grandmother sat around their kitchen table and decided it was time to "reactivate" the Seneca Wolf Clan Teaching Lodge. In earlier times, all the Clans had teaching lodges, similar to what we call school today. Each child would choose a "school" to go to when they became age 7. Each lodge taught their lessons for one year. The Bear Clan taught about medicine. Hawk about sharing. Wolf about family. Etc. When a child had attended all 8 clan teaching lodges, the child would be 15 years old, would have been taught all they needed to know to be a well thought person, and was ready to be an adult and marry if they wish. It was a very elegant and complete education, and may have been a far superior system to most schooling today.

One of the things Twylah taught was "The Language of the Stones". It was later recorded as a book, which could be used to help interpret what the Stones were trying to tell us. What we are attracted to, the stones we pick, the stones we keep or carry with us, tell quite a lot about ourselves. I would rather not say what your stone speaks to you. That would be a bit like interpreting your dream for you. Self discovery of meaning is best.

But I maybe could mention what the stone you picked up says to me. To me it looks rather like an Aztec Bird Face. And if I had found such a wonderful Stone, I believe I would hold it up to my ear and listen to what it has to say to me. For me, I learn wonderful stories when I listen to what the Stones, and Plants, and Animal Peoples tell me. Perhaps if you listen, you might learn a good thing as well.

posted 1 year ago
That is an interesting rock, though I must admit, I thought I was the only person who really enjoyed rocks.

I once lugged a rock back from a 14 mile hike, hauled it across a lake on a ferry into another country, then hauled it back into the United States, and today it sits on my rock wall some 2500 miles from where it started out.
Judith Browning
Posts: 7692
Location: Ozarks zone 7 alluvial,black,deep clay/loam with few rocks, wonderful creek bottom!
1502
posted 1 year ago


Same here. Everyone I know loves rocks. My mother is in her mid-70s and brings home rocks constantly. She makes pillars out of them by putting concrete reinforcing mesh in circles and filling them. I thought loving rocks was universal 😊


My Uncle was a rock collector and a real big influence in my life in terms of this.

He was a 70's guy and got into rock tumbling and that sort of thing. Well they blasted a new road through bedrock by us, and he casually mentioned that the outcropping of rock had quartz veins in it, and that gold was found in quartz.

It took me four years to find it, but its been confirmed via assay; Medium Grade Gold Ore and Low Grade Silver Ore.

But I still kept at it, and I have since found minable quantities of Zinc, and even Palladium. The day I discovered Palladium was March 2oth, 2019, THE DAY Palladium hit its highest price to date, $1560.40 a troy ounce, some $280 an ounce higher than gold!

Over the winter I was able to write a memoir about the discoveries.

All this because my uncle instilled in me an interest in geology.
Hester Winterbourne
Posts: 390
Location: West Midlands UK (zone 8b) Rainfall 26"
79
posted 1 year ago
On the front drive of my house there is a kind of terminal morraine where my sons over the years have been ordered to drop whatever latest rocks they had brought back from our travels.   It seems to be a family habit.  Anyway, this is my favourite.  As you can see it is not very large, and it is also broken, so somewhere out there the rest of it is waiting to be found.  I found it on Cannock Chase so the glaciers (real ones this time) could have picked it up anywhere between here and Scotland.  I took it to a geologist who took it into his university and looked at it under the microscope, but he was still not entirely sure how it has managed to form stripes in two planes, all the way through!
IMG_2753.JPG 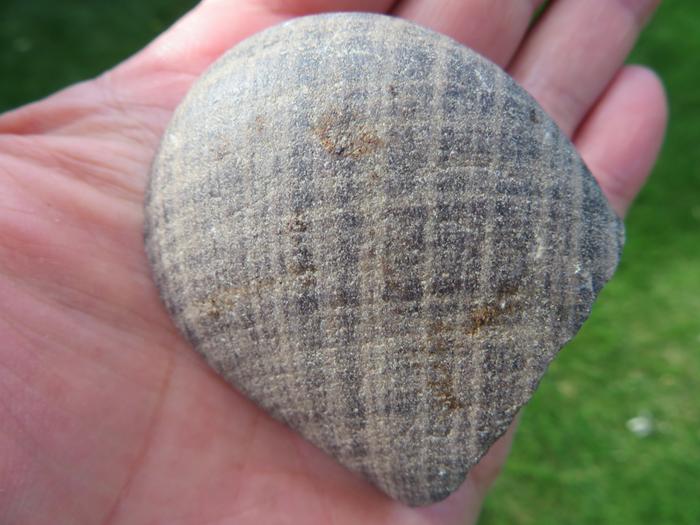 posted 1 year ago
I'm a geologist and mining engineer.
Gimmie all the good rock pics!

Trace, that is a sweet rock you found.

Daughter was required to dig out her very low crawlspace by the lender when she bought her house.  It didn't even have an access hole.  We had to build a low sledge and pulley system.  All her friends pitched in for the month long project, and one was a geologist.  We plotted about seeding the space with interesting specimens to keep him working.

When my middle grand goes into the woods with me, we have to put a firm limit on the number of rocks she can cart out.  Otherwise, there would be none left.  When smaller, she would burst into tears when told that was enough.

This is a mineral outcropping by me. The host rock is Wurtzite and contains 75% zinc by volume, and the quartz holds 3.5 grams of gold per ton, and 4.5 grams of silver per ton. There is also above averages of copper, lead and cadimuim.

Edited to add: About 50 feet away from this outcrop of rock is a stream, and that was where I found an ultra rare Palladium Nugget. I have not yet fire assayed more of the rock to determine the Platinum Group Metals content.
DSCN0512.JPG 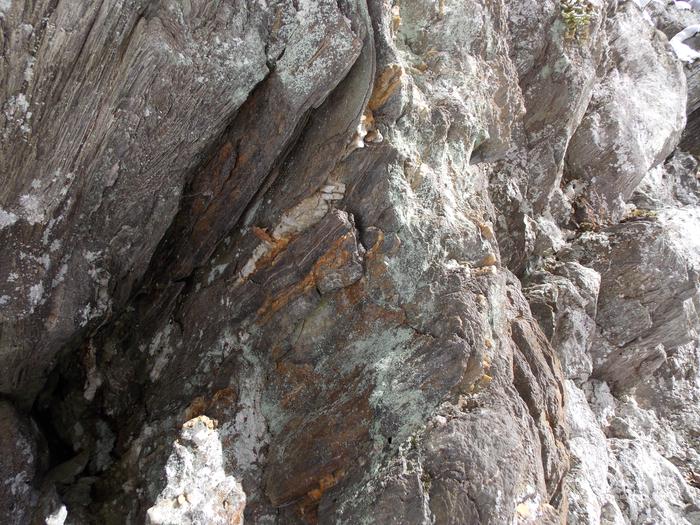 posted 1 year ago
This is the rock formation at the top of my ridge, standing up to 10 feet above the soil line.  Limestone?

We call it Condos for wood fairies. 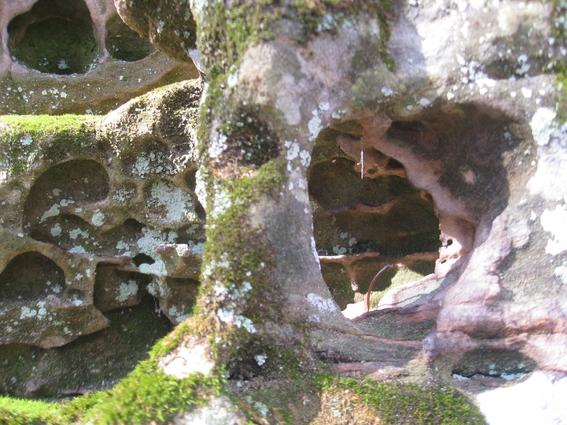