http://youtu.be/7qDHAjFVsXU
Monte Hines
Posts: 190
Location: Andalusia, IL. Zone 5a
7
posted 11 years ago
ScienceDaily (Jan. 12, 2012) — Honeybee populations have been in serious decline for years, and Purdue University scientists may have identified one of the factors that cause bee deaths around agricultural fields.

Regards to all
Monte Hines

Posts: 2591
Location: Cascades of Oregon
526
posted 11 years ago
I've seen this in a couple of areas now an accidental discovery when looking for praying mantis food might be the answer.

Robert Ray wrote: I've seen this in a couple of areas now an accidental discovery when looking for praying mantis food might be the answer.

I didn't see the possible "answer" in your story, could you give me the link? Very interested.
Robert Ray
gardener

Posts: 2591
Location: Cascades of Oregon
526
posted 11 years ago
This article might be a bit better.

Robert Ray wrote:This article might be a bit better.

"404: The webpage cannot be found" Well, poop. I'll Scroogle search it myself, see what I can find.
Robert Ray
gardener

Posts: 2591
Location: Cascades of Oregon
526
posted 11 years ago
Hey maybe having a praying mantis close to the hive would be an answer if they'd just eat the offending flies.

posted 11 years ago
not sure if this has been asked but
WHY do you want to encourage swarming? what is the purpose of it?

Robert Ray wrote:Hey maybe having a praying mantis close to the hive would be an answer if they'd just eat the offending flies.

It appears that the bees were to be the mantid chow. Mantids would eat flies and honeybees both if close to an infected hive.

Devon Olsen wrote:not sure if this has been asked but
WHY do you want to encourage swarming? what is the purpose of it?

swarming is how the "superorganism" reproduces. so if one colony swarms, two colonies are the result. it's likely that it's also an important part of the colony's life cycle, quite apart from the reproductive function. it also leads to naturally-mated queens which gives the many advantages of genetic diversity in a colony.

posted 10 years ago
So I'm a big fan of www.sciencedaily.com, as they are really good for academic and periodical sourcing. This article came up today:

It seems to suggest that human interference is standing in the way of bees healing themselves, which makes sense to me, as it correlates with the idea that humans preventing swarming behaviour and messing with their food supplies and their quality. It also accords with some permaculture ideas of livestock self-medicating in an environment where sufficient quantities of good food and useful poisonous plants co-exist. 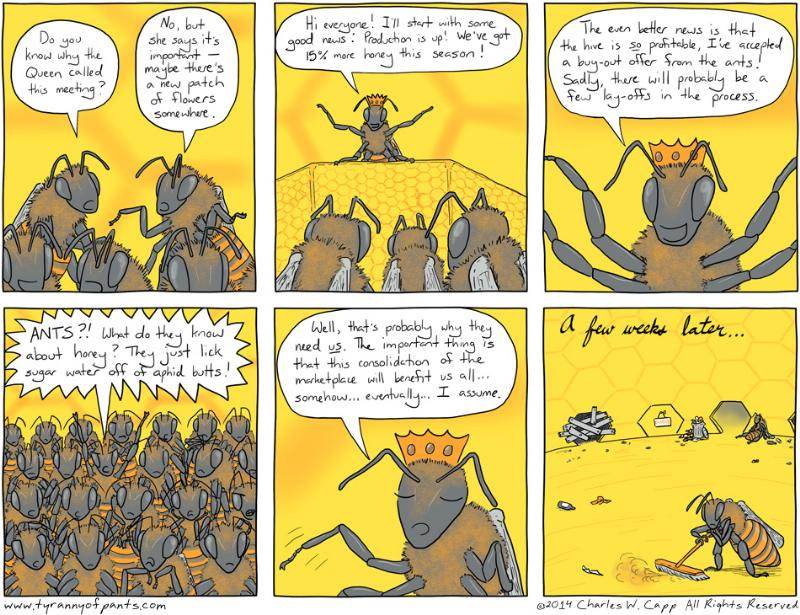 Link to a news report on Harvard study on CCD and neonictinoids (or however that's spelled).
Cassie Langstraat
steward

posted 7 years ago
I liked Paul's CCD better because it has solutions. The new one you posted is alarmist and will get more reaction.

Thanks for posting both and reminding us that we can be our worst enemy or nature's best friend, just how you clean the lenses on your sunglasses.

posted 7 years ago
Lots of good information. Most of the world is out on holiday. Give the video time. It will get there.

Along with the "funny you should mention that" comment, my borage has never been so lonely. This is a new experience for me. Last year it was hopping with pollinators. I don't live in an area with big ag chemicals. I live in a small town in the heart of frackland. Around here, the weather is screwing with nature. We hit 93° in early May, followed by two very late frosts. I see climate change. In the last 5 or so years, we've been having two winter seasons, an early severe October winter, bitter cold but no snow, followed by mild Nov/Dec. and real snow and normal cold in January/February. I am starting to see two summer seasons now, warm April/May followed by cold snaps. It's very discouraging. (I'm thinking of putting the garden on wheels.) It seems we have two honeybees and two bumble bees trying to work a tenth of an acre food forest. I chose not to raise bees because we already had lots. I am hoping they recover. I miss my pollinators. The hummingbirds are gone too.

Have you had your minimum daily fiber allowance? If not, visit UrsulasYarn.etsy.com for natural fibers including: wool, hemp, linen, and more. Natural dyes are season dependent.

John Master
Posts: 519
Location: Wisconsin
11
posted 7 years ago
One detail about neonics that I learned a few weeks ago is that they are a powdered substance that coats the seeds on commercial seeds. There are some planters that use vacuum and a (harmless) talc powder to lubricate the parts in the planter mechanism at the planter. Other planters don't use vacuum and the operator uses graphite to lubricate the parts. One theory on how the neonics are causing problems for bees is that the talc dust carries the full strength neonic dust in the air where it lands on plants where the bees forage. The bees then take this full strength dust with them to the hive. Some of this info was taken from the Wikipedia page on neonics.

John Master
Posts: 519
Location: Wisconsin
11
posted 7 years ago
I would have thought this would be something that would have gotten more excitement on here, One neonic got its fda approval revoked! http://m.startribune.com/politics/statelocal/326524291.html?section=%2F