Crossing the streams: wooden sides for a raised bed with hugelkultur aspects to it?

Alison Lee
Posts: 3
1
posted 5 months ago
I am both brand new here (first post) and new to hugelkultur, so I am surely asking a novice question, but have not seen it discussed. Please point me to an existing thread if I missed it, with thanks and apologies if I am redundant. That disclaimed --

What I'd like to do is get the benefits of two worlds in one space.

First, a raised bed in the front yard that is attractive enough the neighbors won't kick. I'm in Silicon Valley, fortunately in an area where my circular saw is not alone on weekends, but still: we are packed tightly in a post-WW II suburban grid. I have six beds I built in the backyard over the past five years, and now have faith in my ability to put some lumber together and have it hold up for a time. Painting the outside of the beds to match the house (leaving the inside unpainted; organic food beds) works well for aesthetics too.

Second, the idea of decomposing logs that hold water like a sponge sounds FANTASTIC in our drought-prone region. One of the backyard beds was on the larger side, so partly out of self-defense to not fill it with expensive bagged soil and partly hoping there's something to the hugelkultur idea, I mounded the center of the bed with branches, leaves, and so forth before adding mixed soil on top. Then I forgot all about it, like a squirrel. This year, I have two beds side-by-side on a soaker hose system off the same timer and manifold. One is lush; one needs additional hand watering from the rain barrels. I figured the hose was crimped, and maybe it is, they do that, but wouldn't you know the bed with the buried branches is the one that is doing a whole lot better? It took until seeing this forum to remember the buried difference.

Here's my challenge: let's say I build a nice raised bed about 12" tall in the front yard, and I have other plans for it to hold frosted glass along the back to screen the view into a glass-walled sunroom. Great. Then I add some happy branches and water it all in, some wild flowers on top, life is good. ...won't I also be dramatically decreasing the lifespan of the boards that form the outside frame for the raised bed? What's the best way to manage that?

I realize that traditional Hugelkultur avoids the entire problem by not having a fussy frame around the mound. Got it. But that will not fit in our front yard well, and as I am looking to add frosted glass on the back, something stable (without needing to dig fence post holes no less) is key to my plans.

My hope is there is an answer in the form of "just leave a 6" gap of dirt between the raised bed wall and the start of the buried wood pile" that someone else has already pioneered. Or maybe "if you use redwood for the bed and something easier to decompose in the center, the redwood won't be much touched while the center transforms." Or something entirely different?

I supposed I could paint the inside of the frame too, or use pressure treated wood, but while my plan is mostly for flowers in the front yard I'd like to be able to slip some edibles in there too. We're fortunate to have neighbors with bees on the roof at the end of the block, and another with cabbages and a lovingly tended mixed food / flower garden in place of where the grass had been. I do have some latitude thanks to enlightened neighbors. But there's also getting things past my spouse. Gardening takes patience.

Thanks for any ideas you can toss my way!
Lorinne Anderson
pollinator
Posts: 409
Location: Vancouver Island, BC, Canada
168
I like...

posted 5 months ago
I am neither a gardener, nor hugelculturist.

That said, I would make the exterior wood purely decorative, an use metal (roofing panels work great) on the interior where the dirt will touch the frame. You could even dig it down, and bury a foot or two which would also help keep water from escaping 'sideways' out of the bed.

Then, if the metal is deemed "unattractive ", you could add wood planks for the desired "look".

Or maybe "if you use redwood for the bed and something easier to decompose in the center, the redwood won't be much touched while the center transforms."

That idea would probably work well. I suggest building it without a bottom. That will allow worms & such to help the soil better. Perhaps dig a hole in the ground to add a log or two there. You could simply add another exterior side of redwood once it does start to decompose.

I would not use paint or pressure treated wood or metal.

posted 5 months ago
I have seen it recommend that in arid/drought areas, it's even better to have the logs/branches buried in a depression vs elevated into a mound as it is more commonly done in wetter environments. If you were to do that then you wouldn't even need the 'ugly' raised bed lumber or have to worry about it rotting.

Alison Lee
Posts: 3
1
posted 5 months ago
Thanks to all, especially Mike. I'll give it a shot and see what happens. I appreciate the collective / collected wisdom here.
thomas rubino
gardener

posted 5 months ago
I just put in a 6' x 28" x 32" tall wood sided box. I dug down at least 1.5' below ground level.
Chunks of birch and ash branches. Used the dirt I dug out to start filling. Filled the rest with beautiful compost that I bought at $100 for 3 yards.
We liked it so much I built a second box , 12' x 16" wide and 32" tall.  Same procedure, 1.5 ' down, fill with birch and ash, cover  with regular dirt and finish by filling with compost.
No paint, just stained and sealed.
We think they look pretty good, but most of all they are 32" tall!!! 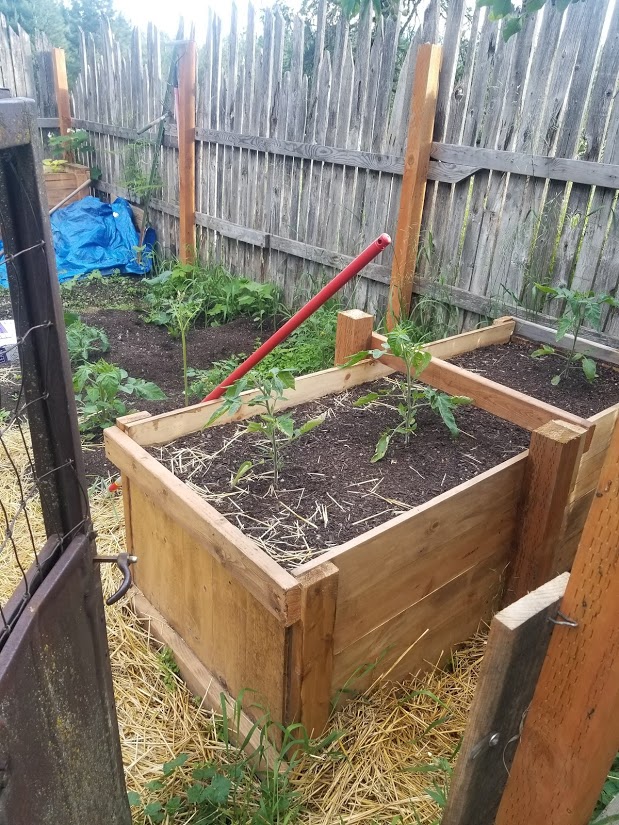 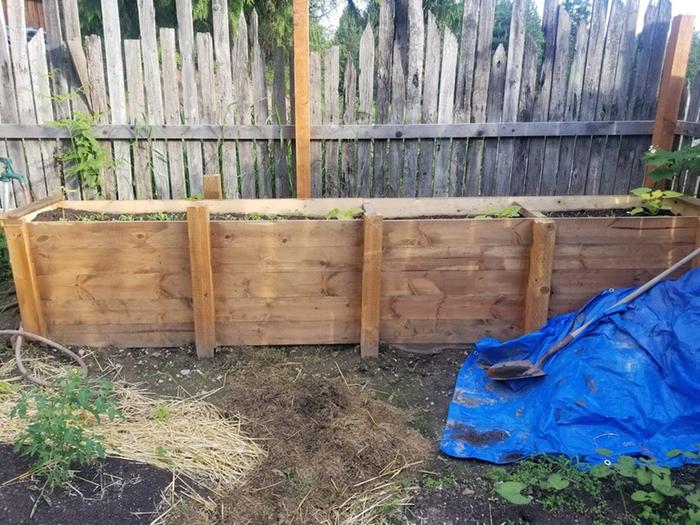 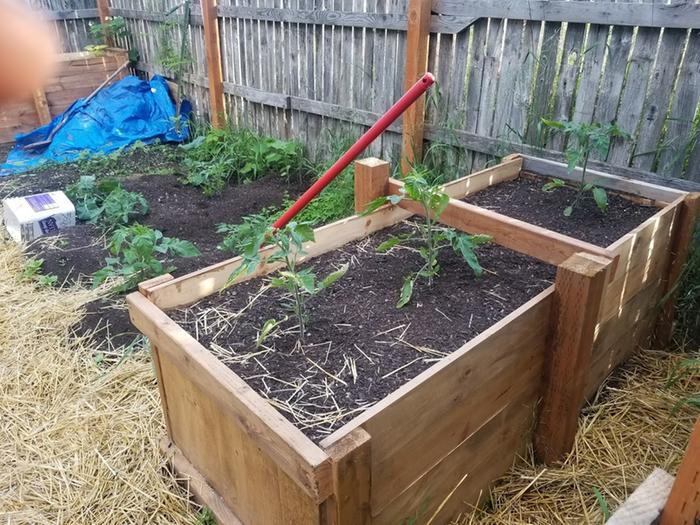 posted 5 months ago
I took a similar approach to Thomas.  I dug two feet deep, then made two foot high beds.  I filled them with ever smaller branches (foot thick logs on the bottom, then 6", then 3", with branches on top) filling the voids in each layer with straw, leaves, sticks, straw, and the dirt I had taken out.  The top I filled with looser soil and compost.

I used treated lumber for my beds.  I understand that nearly everyone says not to, but you need to determine what the risk is and whether it is OK.  I follow this philosophy (found here https://www.finegardening.com/article/are-pressure-treated-woods-safe-in-garden-beds):


Sally Brown, a research assistant professor of soils at the University of Washington, knows her way around both food and metals. Starting out as a chef and then a food broker between farmers and restaurants, she became fascinated with soils and went on to earn a PhD in agronomy. Brown’s current research includes identifying the mechanisms by which organic residuals reduce the availability of soil metals to plants. She has some hard-earned opinions.

Brown says that if you already have the older, arsenic-treated wood in your garden, don’t panic. Plants will not take up arsenic unless the soils are deficient in phosphorus. That is not a problem for gardeners who use compost generously. As for the new copper-based wood treatments, Brown believes the actual risk is minimal. First of all, if plants take up too much copper, they will die before a gardener can eat them. In addition, if homegrown vegetables make up a small percentage of the diet, exposure to any metal taken up is insignificant. Do not use copper near ponds and streams because it is toxic to aquatic life.

If you are worried about that, you can line with metal (which IMO has similar risks to lining with treated wood) or much better yet, line with HDPE plastic film.  If you are anti plastic, then your options are dwindling.  Use rocks or bricks, or use cedar/locust/cypress (which have plant growth inhibiting compounds just like treated wood does, that's why they resist rot.) IMO treated wood is the clear winner unless you have the money for stone or brick, in which case that is the clear winner.

Things I wish I had done differently:

1) leave more room for soil.  For transplants, I am bumping against hardwood branches a few inches down due to soil settling.
2) Mulch immediately.  I have tons of little weeds because I did not put down mulch.
3) Put a cross brace about a foot down to keep the sides from bowing. They don't bow much now but time will tell. Unlike the bed frame, I would not use treated wood for this.  There is a slight difference to me between on the edges and right smack in the middle.
4) Put a copper band around the bed right away to keep slugs out. Too late for me, now I have slug babies in the bed.


Please give me your thoughts on my Affordable, double-paned earthbag window concept