Podcast 325 - Alone in the Wilderness, a Story of Dick Proeneke

Paul sits down with Evan, the first Ant in Ant Village. Paul asks Evan some introductory questions about how things have been going on his plot.


They start to go over the film, “Alone in the Wilderness, the story of Dick Proeneke. Paul sets out to try and figure out just how long it took Dick to build his cabin.


Paul compares what people are trying to do at ant village, as similar to the motivation Dick had which was to test himself, know if he can really survive a winter and live in the wilderness independently. Paul asks Evan his thoughts on whether that is something which inspired him to start out as an ant, and Evan agrees that ant village is his attempt at living alone in the wilderness. Paul and Evan discuss the changes at Wheaton Labs, and how the gappers have been so far with the new system. They go over the upcoming Super Weeks and free PDC.


Paul and Evan turn the conversation back to the film, trying to understand the order of operations Dick went through in setting up his homestead. Paul goes through the dates in the movie, going over some of the tools and wood Dick used. Paul gives a few highlights of Dick's methods and continues piecing together how long it's taking him to build his cabin.


Paul notices how at one point the film talks about Dick harvesting 48 poles and processing them by noon, which he considered a high achievement. After 24 days, the roof is starting to take shape on his cabin. Paul brings up one of the most remembered parts of the film, the impressive wooden hinges.


They go over some of the details with the roof, explaining how Dick used around 2 acres worth of moss to use as a roof cover. Paul describes the construction of Dick's outhouse, and Dick's uncanny ability to reuse unwanted materials.


Paul describes Dick's antics with a bear, and speculates on the logic behind the sizing of the cabin door. They discuss Dick's wood pile, his methods for cutting firewood. They mention a few more interesting aspects of Dick's homestead life, like the heat sources
of his cabin, hunting and fishing, and the problems Dick has with bugs. Paul asks Evan how the
bug situation is at the lab, and Evan reports so far so good.


Toward the end of the podcast they reach the winter months of the film, and they give a few examples of what Dick does in the winter and spring. Evan brings up that in the movie it's pointed out that Dick Proeneke spent 35 years in the wilderness. Paul highly recommends the film, saying it is one of his top five. They leave the podcast to go over some of Evan's designs for his plot.

"Alone in the Wilderness" is fantastic. It was definitely an influence in my life as I went from Urban to Rural. Anyone who has even a remote interest in Homesteading she see this movie and read the first three books (or all of them) in the "Little house on the Prairie" series.

posted 6 years ago
So cool to hear Evan on the podcast. Jealous that he got to say "all the time" with Paul. Would have loved to hear more about his activities though.

Creator of Shire Silver, a precious metals based currency. I work on a permaculture farm. Old nerd. Father.

Chris Waldon
Posts: 14
Location: Kent, WA
1
posted 6 years ago
This is a great podcast! I especially appreciate the commentary on the smaller construction details.
My thoughts regarding the smaller door:
1) It's an outswing door rather than an inswing, which seems like a bear proofing technique as well as a stronger hold against a heavy snow load or hurricane force winds.
2) Having to step up over the bottom log to get in is a structural design choice in my opinion. In normal stick built home construction, an exterior wall is anchored down to a concrete footing with steel bolts, which protects against wall movement overtime, among other necessities. In Proenneke's case, imagine a door that was all the way to the ground, and the walls on either side of the door shifting into the house from the pressure of a winter snowpack. Or even just the natural aging of the logs over the seasons causing the door to be thrown off alignment. By not cutting the bottom log spanning from left to right, Proenneke has kept the side walls of the cabin interlocked with each other, giving more strength and integrity to the whole frame. The logs above the door accomplish the same goal, as well as provide an adequate header between the door opening and the roof.

I missed the part about the different wood used for the door hinges. I only heard Paul say it was a harder wood than the spruce logs. Birch perhaps? 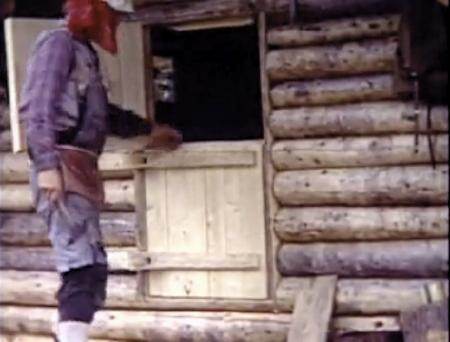 Fafhrd Gray
Posts: 6
posted 6 years ago
You can find plenty of specific information about dates and more of his story by reading
One Man's Wilderness: An Alaskan Odyssey where he goes into more detail, as well as
More Readings From One Man's Wilderness: The Journals of Richard L. Proenneke, 1974-1980

and don't forget to check out the other Richard Proenneke videos:
Alone in the Wilderness part II
The Frozen North which, this time, is narrated by Proenneke himself

as well as
Alaska Silence and Solitude which visits the area and has a few brief encounters with the man himself.
Fafhrd Gray
Posts: 6
posted 6 years ago
Just wanted to again encourage anyone who's interested to read the books (perhaps there is a book club read in this), it would be the most useful tools in breaking down the details, dates, and getting a better understanding of what he was doing and thinking. This isn't to say that what he writes is are absolute facts of the situation, but seeing his thoughts as they come will show his truth of the situation and show the overall philosophy. It's important to keep in mind after all that these are NOT scholarly texts written after the fact, but journals, and while they may be edited (and not all by [or to the liking of] the author) they are nonetheless thoughts and opinions of the man at the time, long before all the interest in what he was doing.

I'm not going to get into all the misunderstandings of things discussed in the podcast, but here at least is an attachment of a side by side look of the different wood augers he was using - the one on the right is a mechanical, hand-cranked style that he used to make the hammer (if you watch the video more closley you can actually see the shadow of the hand crank itself), while the one on the left is a one-piece auger. Many of the confusions/questions raised in the podcast can be cleared up with a more thoughtful viewing of the film as well as reading of the books. ...also yes, there is such a thing as a round, or rather 'puck' shaped sharpening stone for axes.
wa.jpg

You can preview the songs here:
http://tinyurl.com/qcul7ka

posted 6 years ago
I recently listened the the audio version of the book. Almost all of Paul's questions are answered in the book. For example, Proenneke used his friend's cabin (and canoe) while he was building his house.

Also early on Paul wondered about homemade color movies. It predates this film by at least 20 years! I know because I have color movies of my mother as a 2 year old, and she was born in 1945.

Ron Meade
Posts: 1
1
posted 6 years ago
Wow, old Dick Proenecke just keeps living on. I was fortunate enough to know him when I was growing up in southeast Iowa. He is originally from a small village called Primrose, Iowa. His sister Florence lived next to my aunt and uncle and Dick would visit her, sometimes for weeks at a time. I remember Dick coming over to my aunt and uncle's house on several occasions and showing his self-filmed movies on my aunt's dining room wall and talk about his Alaska adventures. He's now a legend up there and his cabin is now a national park site. After watching him shoveling all of the neighbors walks and driveways one snowy morning, I had a sense of just how tough he was. He was in his mid sixties and he shoveled like a machine. It made an adolescent male ashamed just to watch him. Anyway, thanks for the memory prompt.