posted 6 years ago
I'm not sure where it is best to post this, but since it might result in some rants, I'll try the cider press. Feel free to relocate this discussion.......

This cartoon was originally accepted by, then removed by Farm News. Why removed? Because one of the ag companies complained. What's more, the cartoonist was fired! Since Rick Friday and Farm News had published far more biting cartoons in the past, though not targeting Big Ag, I can only assume it was by the wishes of the Big Ag company that Mr Friday got fired. If you google it, there is some brief info online about the event.

My take on this is a big warning to farmers that the info being published in farm oriented news publications is definitely overseen by Big Ag. If they squash a cartoonist for such a truthful observation, just imagine what else they stop farm mags from releasing to their followers. Since I hear people quoting statistics gotten from various farm publications, perhaps one should be careful what one quotes. Sources can be deceiving.
image.jpeg 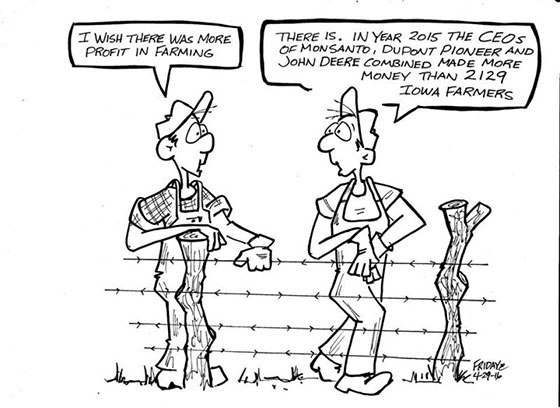 posted 6 years ago
You are close. A seed producer pulled their advertising which is what led to the mans firing.

Honestly, I did not find it offensive at all.

You guys have heard me say this before; I can handle the truth just as long as it is spoken. Apparently a seed advertiser lacks the integrity that I have...and the cartoonist.
John Weiland
pollinator
Posts: 2000
Location: RRV of da Nort
442
posted 6 years ago
There is one Iowa farmer who is sitting more pretty than those other CEOs......especially since he sold the rights of his own soybean genetics to Monsanto:

From Forbes magazine: "Farm boy turned seed-genetics savant Harry Stine has become the richest man in Iowa licensing his powerful corn and soybean seed genetics to multinational firms like Monsanto and Syngenta. One of Stine's current projects is gaining traction with corn growers and could revolutionize the corn industry: seeds bred to thrive when they are densely planted, dramatically increasing harvests. Farmers planted 140,000 acres of the corn in 2015. Stine grew up the son of a hardscrabble farmer and began dabbling in seed breeding in the 1960s. Dyslexic and mildly autistic, but a math and data wiz, Stine quietly built some of the most genetically robust and highest-yielding soybean seeds in the industry. He was one of the first to patent the genetics of the soybean in the early 1990s and, as a savvy businessman and formidable negotiator, landed lucrative deals licensing the genetics to industry heavyweights. Stine Seed still reaps millions of dollars annually from these contracts. It also develops biotechnology traits, which are often applied to seeds to make them pesticide-resistant. Stine owns a small home a couple hundred yards from work and drives a Ford F-150 pickup truck to the Stine Seed headquarters, where his four children work as well. He's an avid table tennis player and enjoys hunting morel mushrooms. He donates to his alma mater, McPherson College in Kansas, as well as to the Mayo Clinic."

Clearly not a permie vision, but some savvy nonetheless.

posted 7 months ago
Rick Friday has been rehired by Farm News.

We live on Blue Planet that circles a ball of fire. Our Planet is circled by a Golden Moon that moves its oceans. Now tell me that you don’t believe in miracles....Unknown