Chris McClellan
pollinator
Posts: 193
73
posted 2 years ago
Hey all,
I hate to tease but I figure it's better than radio silence. I'll try to be clear this project is fighting for time with my job and family and a rich life playing in the mud as Uncle Mud, so I suspect everyone will be irritated at its pace including me. The concept is pretty straight forward. We need something that 1. works every time even if it isn't perfect and 2. can be assembled by anyone who can assemble an IKEA dresser. 3. Can be inexpensively sourced from off-the-shelf components. 4. Doesn't have to weigh 3 tons (although it can) and 4. Doesn't depend on cob (although you can use it).

To that end we have developed a module that in its entirety (including some very effective mass) fits in a barrel footprint but can be set up several different ways that use more or less mass an more or less radiant surface (see examples). You probably could (and others have) been able to figure out something that works just from my photos and if that's the route you want to go knock yourself out I'll even proudly display your photos and consider them "fan art", this is after all pretty open source material. I want to encourage that tradition while recognizing that the amount of love I can give RMH is directly in proportion to how well it can help me support my family.

With the exception of five carved firebrick the whole thing is off-the-shelf hardware components so our offering will be kits and instructions that range in completeness from an entire RMH assembled in two barrels that I ship to you and you plug it into a chimney and fill it with pea gravel or cob (under $1000), to a pre-assembled core and riser, down to a just bag of the five specially carved bricks with a three dimensional template and detailed instructions for stacking bricks and other off-the-shelf components around it. We're still working out sourcing and therefore pricing. Whatever you get from us, the product you purchase will include both detailed lists of what is in it and what you need to buy locally to finish it out. I hate surprises like that.

Eric your concern is at the core (ha ha) of what I'm trying to do. Right now we are focused on our Cottage Rocket Meetups (including Paul's ATC) because they are helping us streamline the manufacturing/assembly process especially in respect to easy DIY assembly. It seems to me that it needs to be really really easy to walk people through a build in person with all my tools at hand before I can expect success with a product I mail you.  If you want to help beta test the instructions lets start cultivating a relationship: info@unclemud.com. Yes you will be able to get one outside of going to a workshop, just not yet because good instructions will take time. Yes we will figure out a way to get you one in Canada but I have no idea how soon or how much $.

Paul is mad at me because our test runs so far are more focused on how easy it was to put together and how it works and we never seem to get around to painting the darn thing. He's right. Pretty pictures will come soon, but first things first. I am not a sketchup person but Paul likes things that are pretty. I've included some pictures that aren't pretty, but they are of real Cottage Rockets we have built. Below is my focus and the order in which you will probably see any results.

1. Build one with me. As a a $200 add-on to the ATC in Montana in July Paul's deal is the best and the product will be more refined then. Plus the ATC is going to be great fun. If you want to build one with me at my place in Ohio I'm doing it about monthly. The next one in Ohio is March 16-17. The workshop is $300. Parts (if you don't bring your own based on a parts list I provide you) are $300. You will take home a functional rocket mass heater. A prototype heats my doublewide in Cleveland for less than $100 per year. Other Cottage Rockets have been installed in Montana, Denver, Portland OR, Columbus OH and Cleveland OH (6 in Cleveland now). Email me at info@unclemud.com if you want to come.

2. A ship-able Rocket Mass Heater. These are actually easiest to produce because proper DIY instructions take time. These will come in Short or Tall (1 barrel or 2), and Full Mass (Cottage) or Hollow Quick Radiator (Workshop) configurations.

3. A ship-able core (burn chamber and heat riser), preassembled around a 3d burn-out template, ready for you to put in whatever enclosure you desire to build your custom RMH your way.

5. A ship-able IKEA type kit, preassembled and packed in a cut barrel, with instructions, ready for you to assemble and fill.

6. An 8" model, a Mobert-style Water Heater, an Oven, a batch-box-in-a-barrel, and all sorts of fun. These will take a while because see above.

Feel free to throw out any questions. I will get to them as I can. You might find a lot of "I don't know yet" responses because its still early days on manufacturing as opposed to one-off production/development of this line which we've been doing since 2013.
--Mud (aka Chris McClellan)
Cottage-Rocket-6-inch-Core.jpg
Cottage-Rocket-Core-in-Barrel-(6-inch-Workshop-Configuration).jpg
Cottage-Rocket-(6-inch-Workshop-Configuration).jpg
Cottage-Rocket-(8-inch-Greenhouse-Short-Configuration-with-Pebble-Mass-Bell-Bench).jpg
Chris McClellan
pollinator
Posts: 193
73
posted 2 years ago
Cottage Rocket Heater Meetup: Build Your Own to take home
March 16-17 or April 13-14
Burton, Ohio
If you want to learn how to build a Rocket Mass Heater the best way is to come build one, and now you can take one home with you when you go.
For the price of the workshop ($200) plus any parts you need you can become a Rocket Scientist (a parts and price list is provided to participants so you can scrounge).
See several iterations of the Rocket Mass Heater at work at our location then build and take home one of our "Cottage Rockets" with removeable mass (pea gravel or cob) or just the core.
If you want to participate as a helper (not take home a rocket) or as part of a group let me know and we will work out a discount or trade. Info@unclemud.com for more information or to RSVP.
Nathan-s-Cottage-Rocket-from-January-2018-Meetup-(2).jpeg
Nathan-s-Cottage-Rocket-from-January-2018-Meetup.jpeg
Rich-and-Cheryl-with-their-Cottage-Rocket-from-the-Feburary-Meetup.jpg
Chris McClellan
pollinator
Posts: 193
73
posted 2 years ago
Hey all,
I wanted to update you on our quest for a shippable core. As I posted last month, most of the action in our R&D department is happening in the form of monthly "Build Your Own Cottage Rocket to Take Home" workshops. This week we hosted the owner of a local upholstery shop whose mini-split heater barely keeps the shop at 50 degrees through the winter. She's been following RMHs on Youtube and decided she was tired of being cold and was going to do something about it. Enclosed are pictures of their 8" Cottage Rocket in the "Tall Workshop Rocket" Configuration. Tall meaning two barrels high, and Workshop meaning there's a little cob in the bottom to hold things in place but the barrels are mainly empty to give off quick heat and boy do they. We also built a matching "Tall" bell to get more heat out of the exhaust.  Paul Wheaton has been bugging me to take pictures of a pretty one so here you go. I've also enclosed nicer pictures of the one in the greenhouse at my son's school. and the now painted cottage rocket we built with Nathan in February. He did a very fetching build of our lightweight bell-bench design. It has cast iron legs from a cheopo barrel stove kit, a dropped barrel top for a more comfortable sitting height, and a cob saddle for a little thermal mass and improved comfort.

We'll be showing off a six inch model at the Mother Earth News Fairs starting April 28-9 in Asheville NC. Our next build is this week for a hydroponic greenhouse here in Cleveland with a couple Case Western Reserve University Mechanical Engineering students. Feel free to contact me if you want to come out. We'll also be building them at the ATC at Wheaton Labs in July if you want to join the fun. https://richsoil.com/atc.jsp tell them Uncle Mud sent you.
IMG_20180414_165252208.jpg
IMG_20180414_165359684.jpg 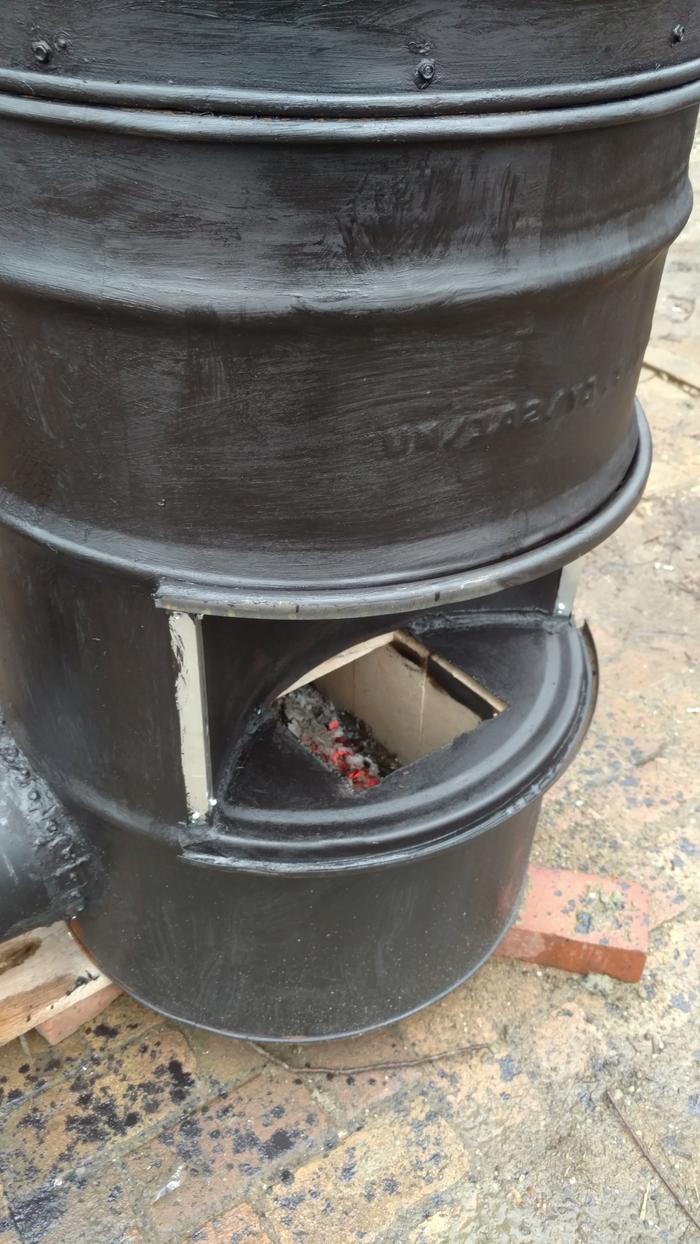 --Uncle Mud
IMG_20180414_165125682.jpg
IMG_20180414_165231720.jpg
IMG_20180831_190236372.jpg
Chris McClellan
pollinator
Posts: 193
73
posted 2 years ago
More progress on the CottageRocket and WorkshopRocket front. We've been hosting monthly builds. Last  weekend we built 8 heaters with folks from as far away as Eastern NY and Western Michigan. Yesterday I installed this lovely code approved, insurance approved workshop rocket in an upholstery shop in Ohio. It has a "tall" radiator bell on top and a "double" radiator bell (stratification chamber) next to it to get as much heat out as possible. The client plans to loosly fill both with bricks for more thermal mass. Dragonheaters suggested that and I'm not sold on it as a able to send the stored heat into the room in any meaningful way. For this installation in an outbuilding our code guy wasn't concerned about UL listing, just that the "kit" was installed according to manufacturer's instructions. Now I just have to sit down and write the instructions.
IMG_20181113_191153597.jpg
IMG_20181113_191058551.jpg
IMG_20181113_191036589.jpg
Jerry Ward
Posts: 232
Location: S.E. Michigan - Zone 6a
12
posted 1 year ago
Chris McClellan - How are you coming on a "workshop heater kit"?  I will be building a pole barn this year and would like to put one of what you show in it.

Chris McClellan
pollinator
Posts: 193
73
posted 1 year ago
Jerry, we are finishing the manual right now. The kits and heaters are available on a one-off basis while we get the manufacturing process worked out. The one in the picture is finishing its first season heating a garage upholstery shop with flying colors. If you want to come build one with us we have workshops coming up in Cleveland May 24-25 and Oxford MI on June 14-15. Meanwhile I recommend you start watching craigslist for a good triplewall stovepipe and the thimbles to put it through the wall or roof.
Joe Danielek
Posts: 10
1
posted 1 year ago
NICE Air Mass Rocket Stoves, for me my interests are geared towards charging the mass for longer periods of comfort between burns.

Chris McClellan
pollinator
Posts: 193
73
posted 1 year ago
Joe, the barrels can be filled with cob or bricks or even pea gravel for thermal mass. We've also built benches out of cob or pea gravel for even more thermal mass, and the cottagerocket just plugs in.
Jesse Baker
Posts: 19
3
posted 1 year ago
I’m sure we will all be hearing about this shortly,,, I really want to buy that cottage rocket plan! And I’m really curious what it’s supposed to be worth or what’s the cost, eh?
Jerry Ward
Posts: 232
Location: S.E. Michigan - Zone 6a
12
posted 1 year ago

Chris McClellan wrote:Jerry, we are finishing the manual right now.

Are the plans available yet?

Jerry Ward
Posts: 232
Location: S.E. Michigan - Zone 6a
12
posted 2 months ago
I have one of the metal carports that I've put sidewalls on.  This barrel style would work well for my application (fast heat for a couple of hours while I'm out there working).  Any plans available yet?