Has anyone spotted any morels?

rachael hamblin
Posts: 129
posted 14 years ago
It's about that time again...has anyone spotted any morels yet this year? And while I'm at it, would anyone be interested in meeting up for a mushrooming expedition?  I'm in Olympia but will travel for morels.  I know 'em when I see 'em but have little experience actually finding them, so going out with someone who knows where to look would be awesome.
Dave Boehnlein
Posts: 299
Location: Orcas Island, WA
6
posted 14 years ago
They're up for sure. Our interns have found a few patches up here on Orcas (which we've scarfed down with great gusto). Of course there are probably better hunting grounds near Olympia.

rachael hamblin
Posts: 129
posted 14 years ago
There's a great website on Morels called the Great Morel that maintains a sighting map each year:

It's a pretty awesome resource, you can see where and when across the states morels have been sighted which is great for knowing when's a good time to go looking...
Posts: 26
posted 14 years ago
I found some in Burien along the side of the road, but they were dusty and had been sprayed. I picked a few and threw them in my backyard. You never know....the spores might have the right environment!
Posts: 21
Location: la grande, or
posted 14 years ago
what i'm wondering, is has anyone ever found anything better to do with them than bread and fry them?  they are soooooo good like that, but how about some variety?  the flavor tends to get lost in complicated recipes, soups, etc.  any ideas?  i sauteed some up in butter and at that over freshly boiled ravioli, that was good.  i bet cream of mushroom soup with morels would be good.

"a journey of a thousand miles begins with a single step." -Tao Te Ching by Lao Tsu

posted 13 years ago
Regarding mushroom flavor: I don't saute them in anything but butter anymore.  I've tried combinations of oils, and oil and butter, but nothing seems to heighten the individual flavors like butter.  And I agree that simple foods make the most of the delicate flavors of mushrooms; omelets (especially with swiss cheese), quinoa or over soft polenta.  Yum!

www.alwaysgrowingdesign.weebly.com
"It is, of course, one of the miracles of science that the germs that used to be in our food have been replaced by poisons." - Wendell Berry

Anonymous
Posts: 0
4
posted 12 years ago
Aren't morels frequently plentiful after fires?  There's a mountain across the river from us that will be flush with them soon, we're all hoping.  Traveling from forest fire site to forest fire site in california could quickly become depressing though, even with all the tasties to find.
jacque greenleaf
pollinator
Posts: 492
Location: Burton, WA (USDA zone 8, Sunset zone 5) - old hippie heaven
8
posted 12 years ago
It's only depressing if the soil has been fried. Otherwise, a burn becomes a berry patch and wildflower garden in short order - especially here in the west, the land loves a burn every few decades. It's instructive how well-adapted many trees and shrubs are to fire regimes, and how eagerly plants move into burned areas.

If it weren't for the air pollution and liability issues, I'd be looking to do controlled burns on our five acres, to keep the seedling pines in check, and encourage more oak reproduction.

Back on topic - has anyone had any experiences with Stamets' method for establishing a morel patch?

Anonymous
Posts: 0
4
posted 12 years ago
Well, around here, after a burn the loggers are allowed to do "salvage logging" wherein all the normal restrictions are lifted and they generally just rape and plunder the whole area if it's owned by corporate timber.  The whole mountain that burned last summer was logged heavily in the fall, and has been getting shorter this winter.  I haven't seen it yet but I can imagine that it's not pretty.  It'll take awhile for the area to recover.  And morels will hopefully be part of that process!
Brenda Groth
pollinator
Posts: 4437
Location: North Central Michigan
36
posted 12 years ago
we need a good warm rain here..and it has been dry for over a month..so we wont' get them for a while..no rain in the forcast..

we pick them in our yard and gardens as well as the woods nearby..we always use mesh bags when we walk around picking them so the spores can fall out and spread.

one year (where Joel's house is now so that spot is gone) we had put down mulch of wood chips and fertilizer of horse manure/bedding..and we had gobs and gobs of morels that year in the paths and gardens ..but alas that is under Joel's home now..so we have to start over with our new garden..believe me the wood chips and horse manure/bedding will be on its way this spring

Caitlin Elder
Posts: 69
Location: Missoula
1
posted 12 years ago
Would anyone be interested in getting together and hunting some of them down?
Brenda Groth
pollinator
Posts: 4437
Location: North Central Michigan
36
posted 12 years ago
i forgot to mention that we dehydrate them by cutting in half..remove bugs or soil..lay on paper towels and they dry in a day or so..then we store them in jars and crumble them up in all kinds of dishes from dried state in the winter..great in spaghetti sauces, on pizzas..in soup..etc.

Brice Moss
Posts: 700
Location: rainier OR
9
posted 12 years ago
the dried one make the most awesome cream soup in the middle of winter
my personal #1 comfort food
paul wheaton
steward

posted 11 years ago
Just gloating that I found some morel mushrooms.  Usually when trying to find morels, I end up walking right past them while the people behind me find the bounty.  For the first time in my life it was the other way around.  Brian Kerkvliet of inspiration farm in Bellingham, Washington walked right past these morels and I spotted them!

jen m wrote:
what i'm wondering, is has anyone ever found anything better to do with them than bread and fry them?  they are soooooo good like that, but how about some variety?   the flavor tends to get lost in complicated recipes, soups, etc.  any ideas?  i sauteed some up in butter and at that over freshly boiled ravioli, that was good.  i bet cream of mushroom soup with morels would be good.

Hi folks, I'm a newbie to the board.  Living in the PNW and also on the lookout for morels at this time of year.

Jen, watching Paul's video today about the morels he found prompted me to come see if anyone had posted about cooking options.  You are asking about variety, and made a good point about their flavour sometimes getting lost in complicated recipes.

Something I learned many years ago is that the flavour of morels is improved and intensified  if they are dehydrated first before cooking.  The best way to get their richest flavour is in soups and stews, sauces and gravies.

Soak your dehydrated morels for half an hour or so in cold water with a couple of pinches of sea salt in the water.  Once the morels are rehydrated, remove the re-hydrated morels from the water so they can be sliced into pieces and use the soaking water as the base for your soup (or gravy or sauce) broth.  There is also a lot of flavour remaining in the soaking water, so if you prefer not to make a soup you can cook the water down to get a condensed broth base for making gravies or sauces.  If you prefer to make a soup, bring the water to a gentle simmer (after removing the rehydrated morels for cutting up), then add the sliced morels and any other ingredients to the simmering broth.  Simmer until all is tender.

Jason Tomblin
Posts: 33
Location: Fraser Valley, BC Canada
3
I like...

posted 10 years ago
I've been finding morels on my lot where I burned some dry Tansy stems in early spring last year. I built a compost bin over the burn site, and have been having some excellent morels growing behind the bins and one came out of the edge of a compost pile. What an wonderful surprise. 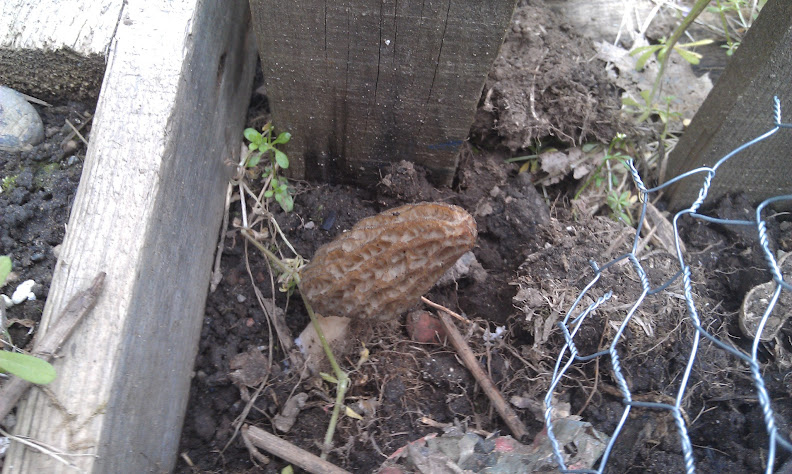 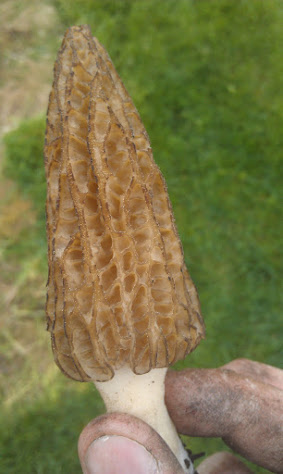 posted 10 years ago
anyone know what color of mycelium morels have?

i noticed in the firepit after using water to put it out that there was yellow spots and blotches on some of the leftover charcoal, just wondering if this is any kind of mycelium for any kind of muchroom

i post here because morels are the only fungi ive heard of as a fungal newb that likes recently burned things...

posted 6 years ago
Yesterday was a big morel day. Several people went to a spot where there was a fire last year and found some. Janet found more just outside my office door. By "more" I mean that she found more than the amount that people found by traveling. Lots were harvested. This morning I went out and spent two minutes taking these pics with my phone.