How to build your own hot water heater

MJ Solaro
Posts: 131
Location: Bellevue, WA
1
posted 14 years ago
Check out this excellent story about a family that decided to build their own solar hot water heater. The entire project cost about $160 in materials.

Now, it should be noted that the project was completed in Florida, and as such, the system has no way to make sure the pipes don't freeze, but I can't imagine that would be too difficult to design into this straight-forward system. 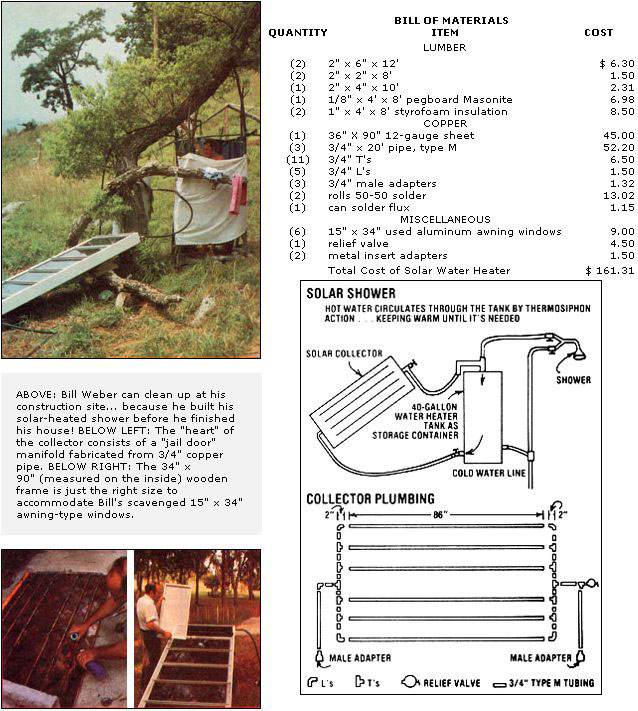 Anonymous
Posts: 0
4
posted 14 years ago
Another option is to use a black bucket (preferably the plastic gas container kind) hung above outdoor shower stall. Fill night previous, sun warms the black plastic rather rapidly, by mid-afternoon on a very sunney day water is nearly hot. On an overcast day, water is tepid - warm enough to shower in. Use a piece of surgical tubing or garden hose for the shower nozzle or rig to a sprayer you made yoursaaelf. No water pressure but gravity does just as well.
paul wheaton
steward

posted 13 years ago
So .... would this be something where you fill it with water, let it heat, shower and then empty it - thus avoiding legionnaire's disease?

Al Freeman
Posts: 44
Location: North Texas plaines
4
posted 6 years ago
Can you tell I'm new to this 4m?
I just posted an article on how to build your own solar water heater for under $100, but I put it Here:

Hey, nobody's perfect.  In fact, check out my "tag line" at the bottom of my posts; it explains everything and I got the quote from none other than Bullwinkle Moose, so you know it's golden.

Nothing difficult is ever easy!

paul wheaton wrote:So .... would this be something where you fill it with water, let it heat, shower and then empty it - thus avoiding legionnaire's disease?


Paul, I realize this post is 10 years old but my research doesn't suggest that Legionnaires disease can be a danger in this type of situation, any more than any other solar hot water heater, or hot water heater of any kind. If bacterial growth is a concern, having the water go through a simple biosand filter before re-entering the system would prolly take care of it.

As for solar water heaters, I made one on a similar vein but with no cutting and sweating of copper pipe. I built a box out of plywood scraps the size of the old, uninsulated casement window I found, then lined the box with surplus rigid insulation and painted it flat black. Then drilled a hole in each end of the box big enough for the ends of a 20-ft coil of 1/2 in ID soft copper tubing. I sprayed the coil flat black, then put the whole coil in the box, spreading out the coils for max surface area exposed to sunlight. I put a shark bite compression garden hose fitting on each end of the coil and installed a brass hose shutoff valve on each end of the coil so I could control water entering and exiting the water heater if necessary. I managed to find black garden hose that was temp-rated for 165 degrees. I used that for incoming and outgoing water and then ran the outgoing hose end to my utility sink, which already had a source of cold water to it. It could just as easily have been hooked up to the water heater tank as in the above post.
By no means was my box sealed tightly; the window was warped and the hinges left a gap that I tried with limited success to seal with weatherstripping. I made it for a workshop demo so I was not too concerned with getting it perfect. I wanted people to know they could do this and it would work, even if they had limited skill.

Results: On a 35-degree sunny, windy day, the internal temp of the box was 150. Water coming out of the box was 157 degrees (too hot for use without mixing with cold from the sink).
On snowy, cloudy, 15-degree days the temp inside the box was 85 degrees and the water coming out was 90.
When summer came, I realized my insulation was not meant for extreme heat because it melted. I replaced it with heat-resistant rigid insulation and warned people not to use water straight from the heater! I never did do anything to control the extremely high heat other than warn people about it, which is prolly not the safest but it was a quickie project built for a workshop and I was on to other projects by then.
The outgoing water actually exceeded the temp rating of the hose, but the hose didn't fail so I left it. Just warned people to use it for washing or rinsing, not to brew tea or coffee!

posted 3 years ago
David Goodman filmed another method that is a combo hot water heater via stove or by solar heating.

I believe a combo solar / rocket would be ideal..      But one must be aware of BOOM SQUISH...    when building these.

Life on a farm is a school of patience; you can't hurry the crops or make an ox in two days.
Henri Alain