Oystein Skjaeveland
Posts: 15
posted 5 years ago
We are considering having two pigs this summer. They will probably be here from 8 weeks of age in early summer until harvest time in October or thereabout. The will be outside and moved around in a field we want dug. Small pens moved almost daily, with electric fencing. Does anyone have recommendations or examples or plans or ideas for a small, lightweight, moveable, uncomplicated, inexpensive and not too ugly shelter for these pigs? It would be good if one person could move the shelter alone. The temperature will be 10-15 centigrades or more (we have a cold spring this year). The shelter does not need to be insulated. The pigs will only be brought outside when they can tolerate the temperature, otherwise we can use a heating lamp. Thank you for your input.
D Nikolls
pollinator
Posts: 1530
Location: Victoria BC
214
posted 5 years ago
Pigs are brutal on shelters! They like to scratch themselves on whatever is at hand, which is generally the shelter. They won't be very small by fall!

Last year the initial solution was a 'C' of pallets on edge, tied together, and supported with t-bar fenceposts driven *deep* in the ground, with a tarp over the top. Then we would rotate the fencing around the shelter, so that we'd only need to move it occasionally. Unfortunately I think the only criteria from your list that this fulfills are 'uncomplicated and inexpensive'.

This worked fine until we had to put them into a wooden pig tractor because they had lost their fear of the electric fence and were wandering through it at whim. Not sure how we went wrong there...

The previous year at that farm, they'd built a nice portable shelter out of rigid PVC pipes, epoxied together, to hold a tarp. The pigs destroyed it in pretty short order.

EDIT: Not sure of breed, but they were aiming for 350+ pounds by slaughter in late fall.

I use light weight movable pig housing for my KuneKune and AGH pigs. The first one I made is now over three years old, used all year round here in Oregon USA. I use my houses - as farrowing houses and multiple-generation group house. Typical size is 6'x8' but I have more pigs using mine than just two. So a 6'x6' would be plenty for your situation. Yes, without trees pigs will rub against the house, but it's no big issue.

A couple of questions for you -

What is the approximate final weight your pigs will grow to?
Will there be wet and damp conditions?
R Scott
pollinator
Posts: 3588
Location: Kansas Zone 6a
88
posted 5 years ago
Best thing we used was a water tank. The poly tanks meant to haul water in the back of a pickup truck, 425 gallon. It was cracked and wouldn't hold water, so it was free. Used a sawzall to cut a door around where the valve was, plus a hole saw to put several drains in the bottom.

It survived several litters and is still being used by goats. We don't have pigs anymore because of the fence problem as Dillon.

i built a few of these. i started with plastic roof panels for siding, which the pigs are slowly destroying. i am replacing the destroyed siding with wood. which is much stonger, but also heavier. they need two people to move. they are built on skids, so we can drag them around with the 4x4. 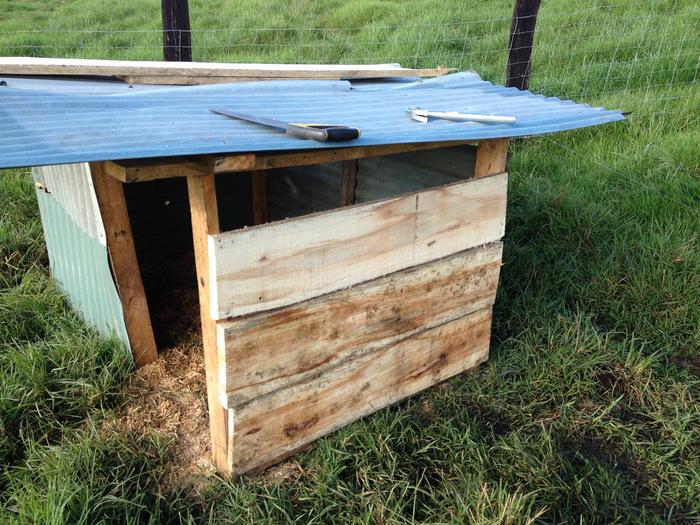 Karen Walk
Posts: 122
Location: VT, USA Zone 4/5
4
posted 5 years ago
I made a mobile shelter for some goats a few years ago. The bottom is open to the ground. When the wheels are down the house almost balances, so you just need to push. I can move it pretty much anywhere in the field pictured by myself. The wheels are 24" bicycle wheels I got from a local bike shop.
20131204_155726.jpg
20131204_155817.jpg
Jared Woodcock
Posts: 18
2
posted 5 years ago
I agree with Walter, I think the pigs typically produce way too much steam anyway for a house. Many of my house designs failed just because the pigs would pull the bedding out and sleep on the leeward side. My favorite shade structure for open pastures is an old round bale feeder with shade cloth over the top. you can just tip it up and roll it onto a new pasture then flop it back down. It is also built to be tough. I thought about putting some roofing on it to make it rain proof but in the summer the pigs appreciate the shady wallow.
Liselle Vetsch
Posts: 3
posted 2 years ago
Hi, not sure if anyone is still paying attention to this thread, but I've come upon it as I'm trying to get our pig situation sorted. We love in the woods of Southern Oregon and will have our AGHs fenced with electric wire rotating through the woods. A couple of you have suggested that you don't think pigs actually need much shelter. I'm curious what climates you're I  and experiencing this. Southern Oregon has winters that are usually just really wet, but some winters we can have temperatures below freezing (sometimes as low as the teens, but more frequently in the mid-higg twenties) sometimes for a few weeks in a row. Last winter we had
2 1/2 feet of snow but that was pretty unusual. We have also gone three winters in a row with no snow. I already know we will need a wallow for them in the summer so that is no question. Your thoughts and input are greatly appreciated.

posted 2 years ago
Hi Liselle; Walter jeffries lives in vermont and is a very experienced pig farmer. Weather in Vermont is certainly harsher than southern Oregon.  I would read all of his posts to learn about raising pigs and listen closely when he expresses an opinion. My pigs use a rotational pen system and they have a "house" always available. I do however have what I call the summer palace, in an outer pen.  Simply an open sided shed with a roof, and straw piled on the ground. Shade to nap in and to get out  of the rain. The piggys seem to prefer it over walking 50 yards back to their room... lazy piggys.
DSCN0814.JPG

Liselle Vetsch
Posts: 3
posted 2 years ago
Thank you, Thomas!  Thanks for the picture too.

The pigs seem happy so far.  When it's time to breed them I imagine I will need to look at this again, but for now they have shelter and a good temporary run coming off of it that i should be able to rotate through most of the rest of winter here in Oregon.
I'll definitely look for walter's other posts too!
Walter Jeffries
Posts: 1114
Location: Mountains of Vermont, USDA Zone 3
63
posted 2 years ago
Pig's don't generally actually need shelters. Shade, yes. Wind block, yes. Beyond that, not so much. Even in the dead of winter (USDA Zone 3) we have pigs who prefer to sleep outdoors on deep bedding packs when they have the opportunity to sleep indoors. They do like a dry sleeping area in the winter. In the warm months they need a wallow but also need to be able to get to dry areas too.

Shelters are more for the humans looking at the pigs than for the pigs.

Any shelter should be built pig tough as pigs are tough on things.

posted 2 years ago
I can only confirm what Walter Jeffries said about pigs needed sunshade and wind protection rather than a house.  We have only been keeping pigs for nearly 3 years, and our porcine accommodations include a large plastic pig ark (2.3 x2.3m), wood built "houses" 2x2.5m and 2x3m and pig shelters which are about 3m long and between 1.5 and 2m deep.  The definite preference for the older juveniles (say from about 10 months old) and farrowing pigs are the open pig shelters.  We try to always make sure that they have enough branches, long weed stems, woody weeds, maize stalks etc. for them to do their own thing with their sleeping areas and have learned not to put fresh straw inside their shelters but just outside so they do it themselves.

You can see some examples of our pigs making their own choices in the pictures below.

Although we handle our pigs a lot, including new piglets and especially our boar, our aim is to let them do their own thing as much as possible.  This video, taken this summer, is a good example of one of the sows making a bed in the coolest most shaded area of the paddock she was in - the piglets are just a week old and she maintained the bed for about 4 weeks, taking almost all the bedding from her shelter to it and also breaking down and using most of the non edible weeds from around the paddock and also all the (wild apricot, sliva plum and elderberry) branches we had put in for them to forage on.. for her to make the nest bigger as the piglets needed more space.

Liselle Vetsch wrote:I'm curious what climates you're I  and experiencing this. Southern Oregon has winters that are usually just really wet, but some winters we can have temperatures below freezing (sometimes as low as the teens, but more frequently in the mid-higg twenties) sometimes for a few weeks in a row. Last winter we had 2 1/2 feet of snow but that was pretty unusual.

Here in North Central Bulgaria our first two pig-keeping winters were prolonged periods of -10C or below with a few weeks of below -20C and about 1m of snow in the pig paddocks.  They were all in open (South facing) 3 sided shelters except for our boar.  He has a good size house that he retreats to in high winds, but for most of the snow/freezing time he slept outside either on self-packed straw (he did the packing) or in what remained of the bushes and shrubs along the edge of his paddock.

The picture below is of our young boar, 22 months old at the moment.  He is an East Balkan Black (the only national protected rarebreed pig in Bulgaria) crossed with a "normal" Landrace pig. The area I have drawn around in yellow is where he normally sleeps - that way he can see right through the paddock areas.
InkedIMG-20171012-WA0011_LI.jpg