Tis the season for morel mushrooms

It's April and that means that morels are starting to pop. Here's a short video I put together to help newbies find morels safely. Have a good day!

My home on the web: http://www.SergeiBoutenko.com

posted 5 years ago
We have been out "morelling" for a couple of weeks now and only started to find the smaller white and black morels in the last few days. Ours seem to have an amazing affinity for ash trees, though about 10% or so do pop up under hickory and oak, and every so often we find one standing in a patch of grass away from trees altogether. I have heard that apple orchards also offer great morel habitat. Is it some sort of mycorrhizae association or what -- do you know?
Karen Matslava
Posts: 3
posted 5 years ago
Thank you for posting! I went looking for the first time in my life today. Didn't have any luck but now I know better what to look for.
cd shahan
Posts: 37
Location: N.W. Washington
posted 5 years ago
Thanks for posting this Sergei. I want so desperately to find a wild Morel here in NW Washington. Cant wait to get out there and hunt.

We are all connected, all life is universal. Permaculture helps us embrace this through direct action, solutions for everyone. http://www.permatees.com

Linda Myers
Posts: 14
Location: Tonasket, WA
posted 5 years ago
As a kid I used to go morel picking in SW MI. We moved to WA ST and continued to find them although in smaller quantities. About 12 years ago DS and DDIL were visiting us where we were located on 68 acres with lots of woodlands in the Puget Sound area of WA ST. They went for a walk, came back for some paper bags, returned about an hour and a half later with 3 of the large grocery bags full. I thought we would never finish cleaning them, but boy were they good. I think that was the last time I had them

Cedric Sophie
Posts: 1
posted 5 years ago
Hello,
This post appeared in the daylish email and It occurs that I just watched a video of the Urban Farming Guys about how to grow your own morels.
Here it is .
Hope you like it.
cd shahan
Posts: 37
Location: N.W. Washington
posted 5 years ago
Cedric Sophie,
That was a great video, it warmed my soul! Loved it.

We are all connected, all life is universal. Permaculture helps us embrace this through direct action, solutions for everyone. http://www.permatees.com

Here in Northern New England, Morels are up a bit later -- usually found around mid-May to late May -- sometimes into early June. A good indicator in our area is Apple flowering -- Morels tend to be up when Apple trees are in flower. I have found them under/around Ash and Elm trees. Some people report Apple trees to be a host, but I've never found that to be true.

Here in Northern Vermont, I start to look for stands of Ash now, when there are very few leaves out. Ash trees leaf out last (except Bl. Locust, which rarely form a stand in the woods), so as the other species leaf out, you can often spot an Ash stand from a distance, when surveying a panoramic view -- they're the only ones with no leaves. Both Ash and Elm have distinctive bark and distinctive forms. Ash leaves are large and compound, so the twigs need to be strong to support them. Thus, Ash trees have no small twigs, only "fat fingers". Elm bark and the form of the trees are pretty distinctive, too, but many are dead or dying. When Am. Elm trees are clustered in the woods -- often around old cellar holes and abandoned farm sites, that's another great place to look. Here's a big tip: the pattern of White Ash bark and White Morels is really quite similar!

True Morels are not slippery or slimy; they have a very firm texture. If you find something that smells bad, it's not a morel -- some Stinkhorns have vaguely similar-looking, phallic shapes, but they are usually found later in the season, and they stink. False morels look disorganized and can be slimy, and the stem is not hollow with thin walls, like the true Morels. I saw a big bloom (flush?) of False Morels on a log landing after lots of trees were removed and the ground was covered in wood chips from all the tops/slash. 50 or more popped up the following year - haven't seen them since.

Last year we found a lot of White Morels -- 2 of them were about 10" tall! Black Morels are much less common here, and usually smaller. I'm told they are sometimes found near Aspen/Poplar trees, and a bit earlier in the season -- haven't found enough to confirm that. Maybe I just haven't learned to find them as well as their larger & easier-to-spot White Morel cousins. Unlike the West, we almost never find Morels associated with evergreens; not enough experience to know if burn sites are better than not.

I find that they can be tough to spot against the leaf litter and forest duff, but that getting your eyes down low -- close to the ground -- can help because you can see things sticking up a lot better, and get a better 3-D view of the forest floor. Remember to be careful of the $@^#%^ ticks -- they are bad, and only getting worse as our climate warms >

Jeffrey Loucks
Posts: 6
Location: Three Rivers, MI
posted 5 years ago
Thank you for taking the time to do the video. We've been pretty dry here this spring so hunting is iffy at best. The video was really helpful in explaining about morels to my grandchildren and we had a nice afternoon searching our little forest thanks to you. Sincerely, Jeff
Don Dufresne
Posts: 28
3
posted 5 years ago
Great post! Thanks!
Micky Ewing
Posts: 107
Location: Merrickville, Ontario
11
posted 5 years ago
Thanks to everyone for sharing their morel wisdom. I have never found a wild morel, but then I haven't done a lot of looking. I think I will give it a go this spring though, because I suspect that it might be a good year for them here. I've read that morels are often associated with ash in eastern North America and many ash trees have been removed from a nearby park this past winter because of an infestation of emerald ash borer. I've seen cuts like that lead to a flush of fruiting fungi, especially mycorrhyzal fungi, so this might be the year for me to look in earnest. I hope we get more rain though. It's been the driest spring I can remember.

posted 4 years ago
I spotted these morel mushrooms just outside my office door. And by "spotted" I mean that Janet told me about them first. Yesterday I think everybody harvested all of them and this is what I found this morning in about two minutes of looking.


A pair of morel mushrooms 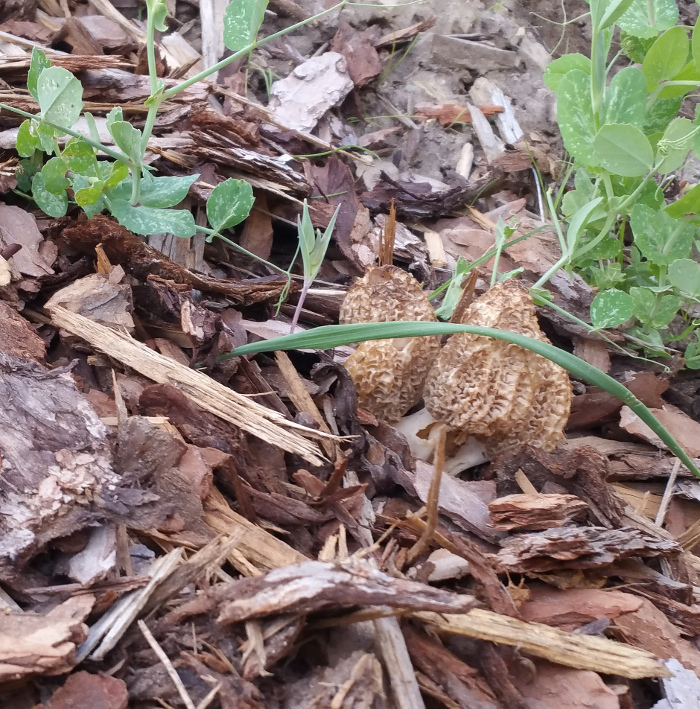 a morel mushroom pushing up through some big wood chips 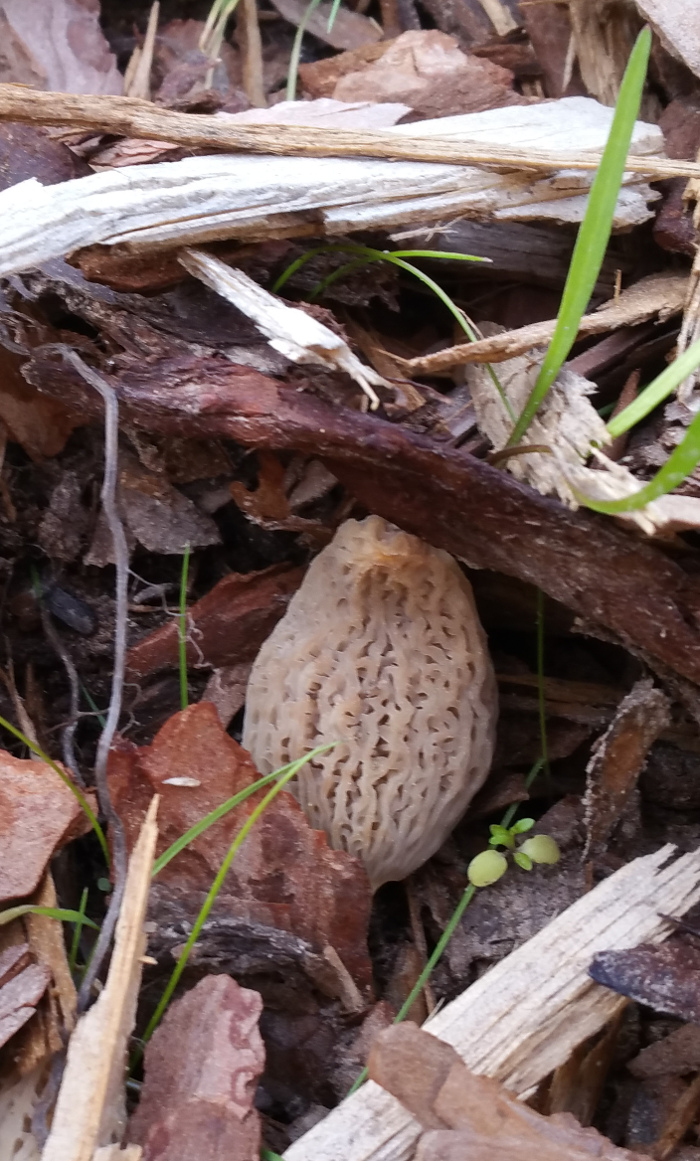 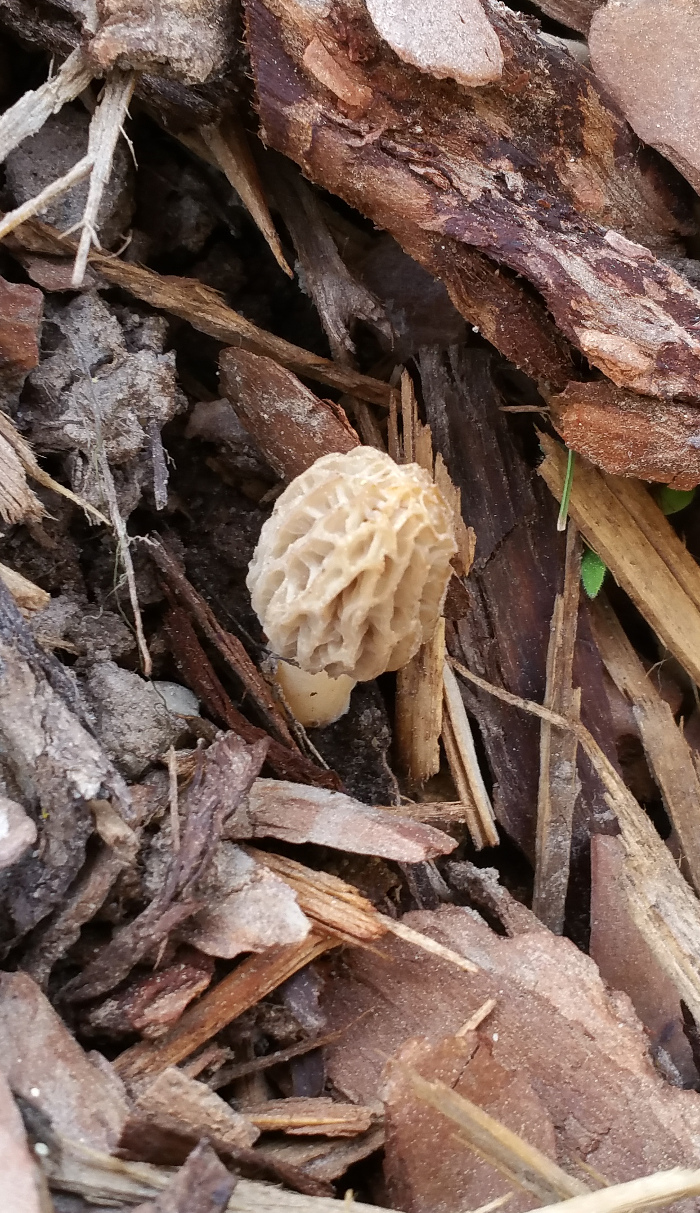 this morel mushroom is friends with a little green growie 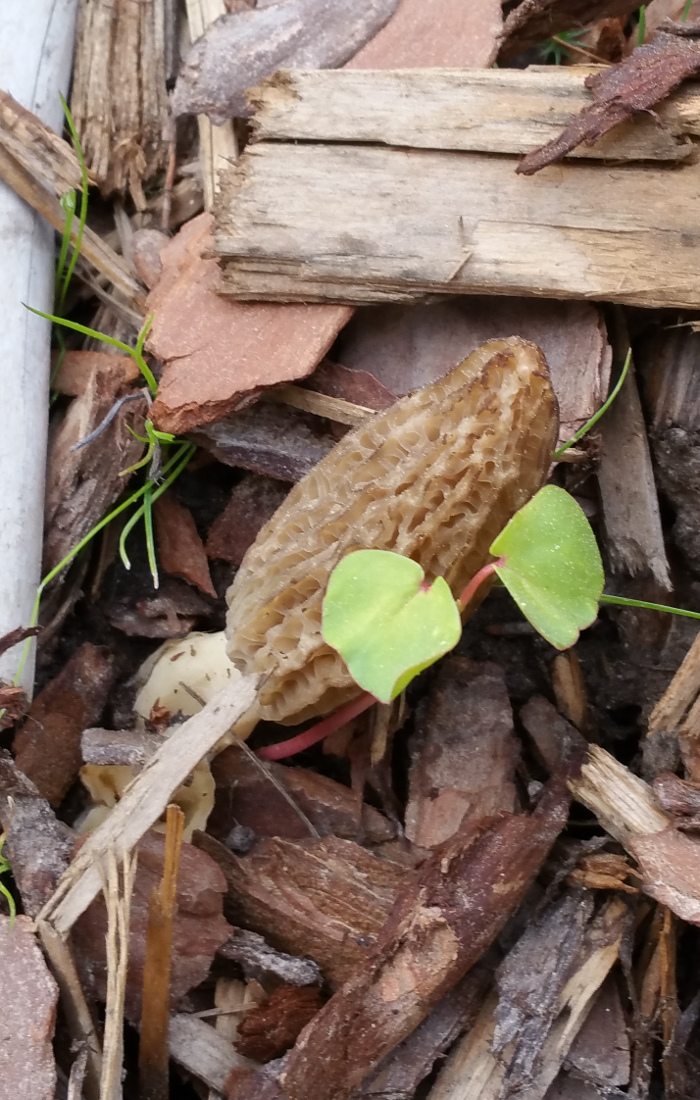 A while back I was following brian kerkvliet and ... for the first time ever ... i spotted morel mushrooms that somebody else had walked past!

Posts: 3183
Location: Upstate NY, zone 5
165
posted 4 years ago
I discovered a small patch of morels around an apple tree on the edge of my lawn three years ago. Unfortunately they were mowed over before I could confirm that they were morels and not something else. I don't know what happened with them last year, but they came up again a week ago and we got a couple of nice side dishes out of them.
Casie Becker
gardener

posted 3 years ago
Any mushroom hunters out there from Central Texas able to tell me if morels would be fruiting here at this time of year. No rush, unless I had an expert look identify it in person I wouldn't be brave enough to try eating it, but I'm curious.

There's a mushroom in my yard right now that appears fairly regularly after rains during cooler (under 80's for those of you in colder climates) weather pretty much anywhere under the cover of my pecan tree. I frequently find it in the garden beds on the drip line. It's got a dark black cap which looks pitted to me, with a sponge white stalk and is hollow from stem to the top of the cap. Today the hole actually goes all the way through the cap.

Regan Dixon
Posts: 134
Location: Zone 4b at 1000m, post glacial soil...British Columbia
9
posted 3 years ago
Could you post a picture?  It almost sounds like something else.  Give it a sniff?  Does it resemble this?  http://www.mushroomexpert.com/phallus_impudicus.html#hadriani
Casie Becker
gardener

posted 3 years ago
Okay, mind you I was just poking at in the yard out of curiosity early. To discover the hollow center I just pulled it apart with my fingers. It's not a very neat separation. Here's one picture of the outside and one of the pieces laying open.
031.jpg 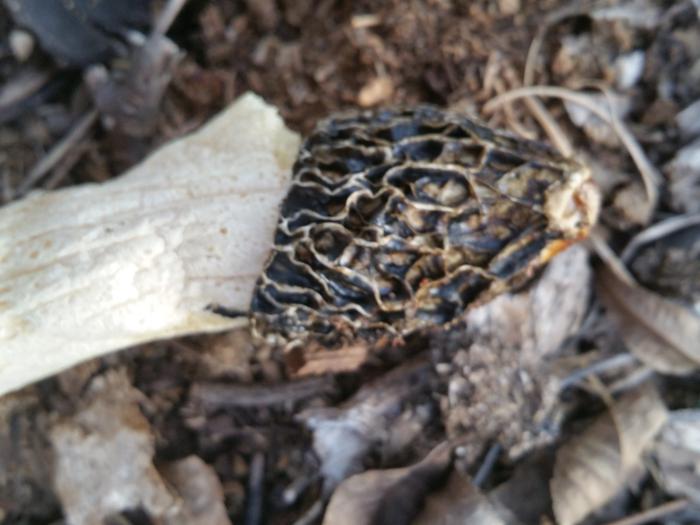 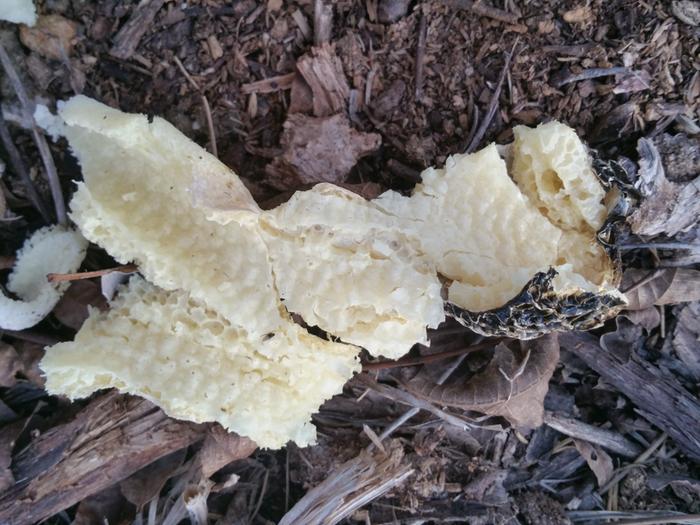 Regan Dixon
Posts: 134
Location: Zone 4b at 1000m, post glacial soil...British Columbia
9
posted 3 years ago
Sorry, not a morel but a stinkhorn.  Check out the link I sneakily added in my last post after you'd gone to take a picture--never mind, here it is again.  I think stinkhorns are way cool.  I wish I could find one!
http://www.mushroomexpert.com/phallus_impudicus.html#hadriani
Casie Becker
gardener

posted 3 years ago
Okay, I didn't think they smelled horrible, but they definitely look like there is slime on the surface. I'm gonna go with stinkhorns after all. Poking around it looks like it could be a potential food in times of desperation, but I'm glad I didn't take the risk of sampling it now.

edit: Since it sounds like you're not personally familiar with them, I'll go the effort to try to describe the scent. If you've ever spilled chlorine bleach on your skin and then tried to rinse it off, yet hours later when you bring your hands close to you face you still catch a linger whiff of chlorine? That's what my fingers smell like right now. The mushroom itself smells like a cross between that and a very bland button mushroom from the grocery store.
Regan Dixon
Posts: 134
Location: Zone 4b at 1000m, post glacial soil...British Columbia
9
posted 3 years ago
Nom, nom.

Regan Dixon
Posts: 134
Location: Zone 4b at 1000m, post glacial soil...British Columbia
9
posted 3 years ago
Ha, caught me at my own game of editing on.
To me, there are two kinds of chlorine smell.  One is a "clean" chlorine smell, which makes me want to jump in a pool.  (Yeah, I know now, but many happy childhood memories, etc.)  The other kind of chlorine smell is not a clean smell--sort of like it went to battle with what was being bleached, and lost.  Makes me want to wash with hot sudsy.  I've never owned bleach, so can't easily go experiment.
I did once sniff a dog stinkhorn that someone else had found.  It was...special.  Strong, intensely animal, even salty smelling.  It was fascinating.
paul wheaton
steward

posted 2 years ago
One person's harvest here at wheaton labs 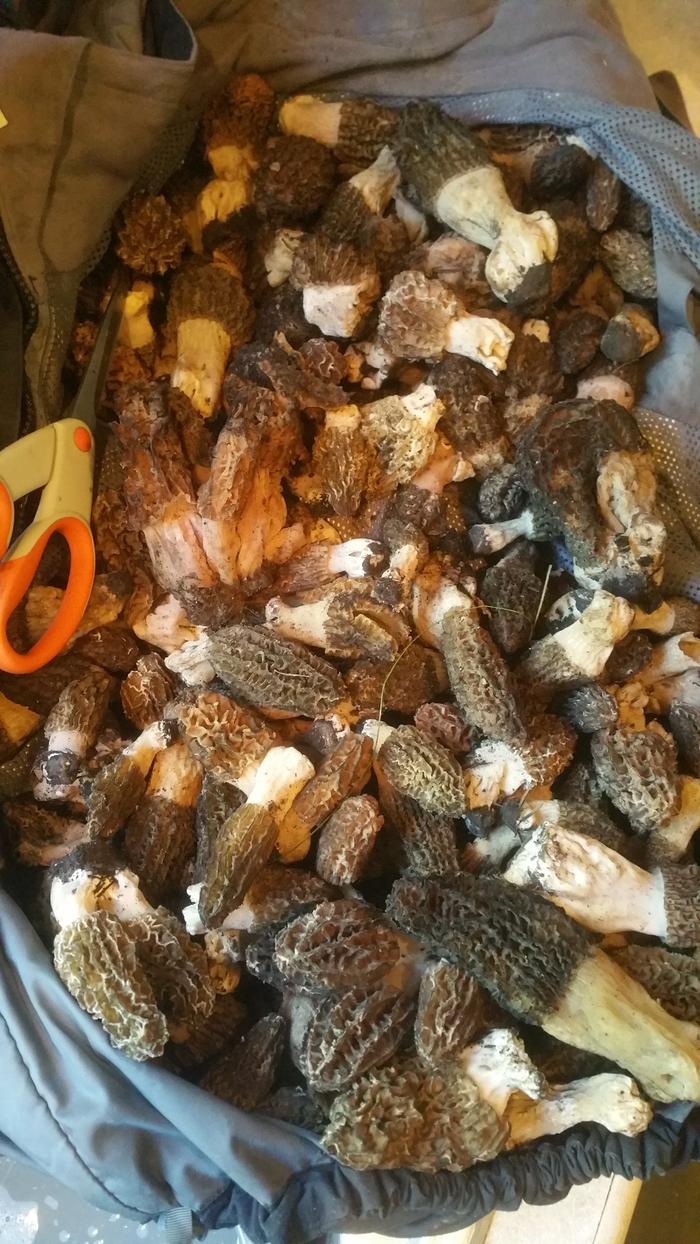 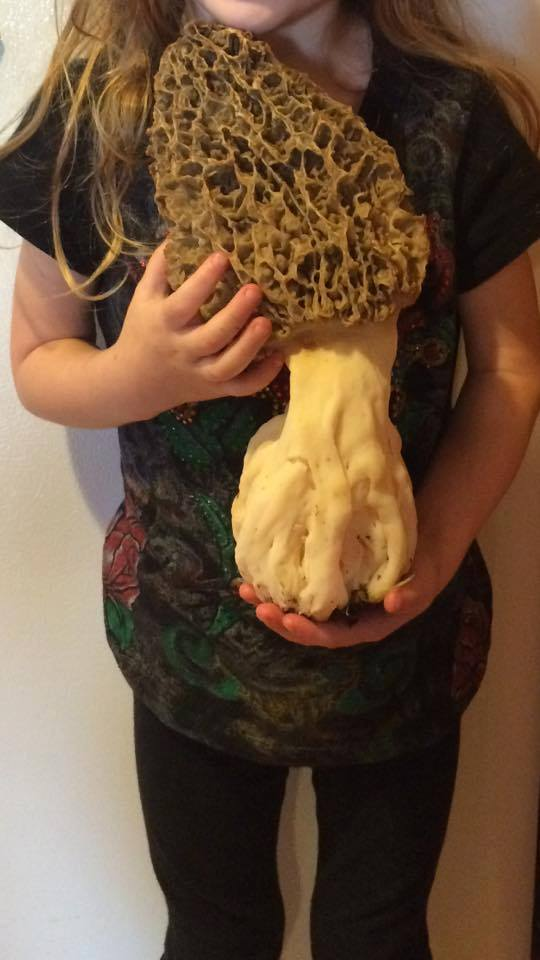