Anyone use buckthorn for oyster log cultivation?
Thanks for the link Mika!  I still haven't tried this, but it's on my project list now.

Squirrels - how to grow food you actually get to eat?
I feel for you Norma. Our urban garden is under constant assault from grey squirrels as well.  You're lucky you ever saw fruit on your squash and zucchinis.  They eat the flowers off ours. But we tried out a product from Lee Valley last year that worked well, to my surprise.  They call it a walk-in garden cage.  I was surprised because the mesh (it's a stretch to call it a cage) is plastic and I would think a squirrel could easily chew through if it tried. Yet it rebuffed them on more than one occasion while I looked on.

However as you will see from Lee Valley's catalog photo, it covers a very small area (about 5'x8').

Ultimately, I think I will be going to chicken wire on a home-made frame.  It'll be much more practical for a reasonable garden scale. Whatever the solution though, it won't succeed unless it covers the top as well as the sides. You need a complete exclosure to keep out those devils.
show more
2 years ago
ontario

New style of insulated wall?
I have the bare bones of an idea for an insulated wall system that I'd like to propose here. Feedback is most welcome. I'm not at the point where I'm likely to be trying this anytime soon, but if I'm lucky, others may like the idea enough to try it out in the mean time.

The seed of this idea is in the style of insulated cord-wood masonry wall depicted in this video.


Here the cord-wood pieces are cut long enough to allow mortaring at both ends of the wood, while leaving a gap in the middle to take some sort of insulation. You can think of this sort of wall as a double wall system: two simple cord-wood walls with an insulated gap between them, where every piece of cord-wood is also a tie between the inner and outer walls. I like this design a lot, but it requires a lot of wood.  There's also a lot of thermal bridging in the wall. A variation on this design has only a portion of the cord-wood going straight through from outer to inner wall to tie them together, thus reducing the thermal bridging, and to some extent, the quantity of wood required.

At some point, it occurred to me that the construction on either side of the insulated gap does not have to be the same.  In fact, though one side must be load-bearing, the other can be much lighter-duty. It really just has to be strong enough to support itself, keep the insulation in place and cope with whatever activities are going on inside the structure. It also occurred to me that a lighter inner wall would not require as much support, so the ties could be smaller, further reducing the thermal bridging.

So here's the essential idea. You build an outer load-bearing wall using some well established method such as cord-wood, cob or earth bag construction, but embedding suitable ties, e.g. cleft hazel as used in hurdle-making, at regular intervals -- say every 2-3 feet. The ties point inward, and at the distance where the inner wall is to be built, they are bent/twisted up or down at a 90 degree angle. The inner wall uses wattle and daub construction and the vertical ends of the hazel sticks coming from the outer wall are woven into the wattle as it is being built. Once the daub has been applied, insulation is stuffed or poured into the space between the walls. The inner wall could be finished with a natural plaster as you might a cob or straw bale wall.

It's a simple idea, and I'm surprised at not being able to find it out there anywhere. Does anybody see any problems making this work? There are refinements needed to address things like plumbing and wiring, hanging kitchen cupboards and accommodating doors and windows. More thinking is needed about how to anchor the hazel ties into the various types of load bearing walls one might use. And the points where this wall meets interior walls, the roof and the foundation probably deserve a close look too.

Does anybody see themselves trying this out? If so, I'd like to hear about your attempts.
show more
3 years ago
natural building
Anyone use buckthorn for oyster log cultivation?

Rob Kartholl wrote:I have had the same idea, as I'm facing maybe oh 20 or 120 acres of buckthorn and wondering what to do with it.

One concern I have is that buckthorn is allelopathic (makes soil toxic to amphibians and plants that are not buckthorn) and is also cathartic, ie it makes birds poop a lot ,which is how the seeds are so quickly dispersed. I have a house rabbit and I have read not to feed buckthorn twigs to rabbits for this reason.

So I am concerned that shrooms grown on buckthorn may be harmful to consume. I will probably do some trials anyway, and update this post in a year or two after I have learned something.

Hi casey  & Rob! I'm also the reluctant owner of several acres of buckthorn (Rhamnus cathartica, to be clear) and also considering its potential uses including cultivating mushrooms.  Luckily for me, you are several years ahead of me in your thinking.  Have either of you taken the next step and tried this out?  If so, can you give us an update?
show more
3 years ago
fungi

Eastern Ontario Permaculture Plant Pallette
Hey Steve, thanks for the post. I'm in eastern Ontario too and always have my ears and eyes open for ideas. Since you invited input, I thought I'd mention that grapes grow wild around here very happily. I often see them along roadsides and even in the city (Ottawa). There are several breeder-grown varietals (here's a nice cross-section) with good sized fruit and that are plenty hardy for our region. 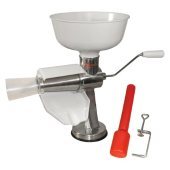 Non-Electric Gadgets
Another manual baler in action. I like this one because only a small amount of hardware is required to build it. Jump to 1:22 for a description of the baler and to see it used. Plans to building one are here.

show more
3 years ago
frugality
Are nitrites and nitrates bad for you?

Melissa Sullivan wrote:...
The bigger concern are the nitrosamines, which are carcinogenic.
...


Thanks for that post Melissa.  Very interesting.  Even more interesting when considered side by side with Gay's linked article, which nearly managed to avoid mentioning nitrosamines completely.  With all the recent press extolling the virtues of nitrates and nitrites, I think I'm starting to pick up the faint odor of an industry lobby at work.
show more
4 years ago
food preservation
Are nitrites and nitrates bad for you?
As with most nutrition questions, the answers aren't simple.  Here's an interesting article which points out possible benefits of nitrates and nitrites in the diet: http://www.pronutritionist.net/2010/08/nitrates-are-beneficial-where-did-i-get-it-wrong/

Bernard Welm wrote:Aren't railroad tie covered in creosote? So it would be a preservative

Getting Ready for Firewood Season

2)The moderately elevated nitrogen pulse in soils and terrestrial plants from spring prescribed fires had typically
disappeared by the end of the first growing season.

3)In most cases the brief nitrogen pulse in soil after spring prescribed fires was completely contained within the
terrestrial ecosystem and did not reach adjacent streams.

Burning away from streams will not protect your groundwater.

I have to say, I'm with Tyler.  I'm firmly of the opinion that a decaying tree is of far more value than the equivalent in ashes.  And there's way more to it than potash.   Ashes cannot decay to humus, improving your soil's CEC.  They are a poor substrate for the growth of bryophytes, lichens and ferns.  They provide no habitat for sow bugs or centipedes, no shelter for salamanders or snakes and no nesting sites and burrows for small mammals.  They provide no food energy for fungi, nor any of the organisms in the large and complex web they are part of.  They provide no reservoir of moisture to see the surrounding ecosystem through drought.  They do not stabilize soils and slopes during run-off events.

Decaying wood does all this and much more.  Google "ecology of coarse woody debris" to find out more.
show more
4 years ago
homestead