Hybridizing cold hardy citrus to grow in the Pacific Northwest

Posts: 8
2
posted 2 months ago
Ichang papeda fruits, picked November 5, 2020, from a tree in Portland, OR
(pictures below)

The taste is halfway between lemon and Kaffir lime.

The outer peels are very soft and surprisingly halfway edible, only a little bit of bitterness, maybe just a little bit skunky in flavor.

The fruits are not really the best quality, and taste a little bit unripe, but there is nothing really bad about them. They'd probably go well with gin.

I know some of you may have been curious about what Ichang papeda tastes like, so the following might be very interesting to you. It is of course not easy to describe in words how exactly something tastes like, but I will try to be very careful and descriptive and give as many details as possible.

There is a tree in the Hoyt Arboretum, in Portland, and saw the Ichang papeda tree there. It's up growing against the wall of the visitor center.
The location of the Arboretum is within the city, but on a mostly forested little mountain ridge inside it, and it is at the top of the mountain.

They also had a Wollemi pine plant that I noticed. Getting off-topic for a moment, the Wollemi pine looked like some of the top had died back, perhaps due to the previous winter, but overall it looked like it was surviving and doing okay. It didn't look like it was ever covered, and it was at least 15 feet away from the building.

The Ichang papeda tree is about 6 feet tall, and there was a fair amount of fruit on it. Maybe 40 percent of the fruit looked like it had dropped. Half of the fruit looked like a ripe yellow, or very close to being ripe, but the fruit size was pretty small. Maybe not much bigger than poncirus. So maybe in this climate the fruit does not have time to grow to its maximum size, or maybe it is still too early in the year (October 6).
So it is possible the fruits I tasted might not have been fully ripe.

The tree itself looks like it is doing well. I could not see any signs of the base of the tree being grafted on to anything, although I cannot be entirely sure. So it might be own-root. The leaves looked a healthy color.

The fruits I tasted were not much bigger than normal Poncirus trifoliata fruits. Although Ichang papeda fruits are supposed to be bigger than that.


The fruits smell similar to lemon, but deeper smelling, maybe almost a little bit resinous woody smelling (entirely in a good way). It's a beautiful fragrance, at least in my personal opinion.
Something about the fragrance smells just a little "off", in a way that sort of reminds me of kaffir lime. Maybe even almost the slightest bit "skunky" (but I would not say in a bad way).
The fragrance is very similar, in a way, to Yuzu, except without the sour orange type of fragrance and without the "spiciness".

(And some of the deepness almost reminds me a little bit of the deep aspect of the smell in Satsuma mandarins, though it would be a stretch to say it smells like Satsuma)

I can eat the rinds and peel of the fruits with little difficulty. I would say they are about as edible as mandarinquat, but maybe with just slightly more bitterness. Pretty similar to a kumquat hybrid or to citron, more like citron in flavor.

The flavor of the fruits is somewhere between lemon, citron, lime, and kaffir lime. But a little bit of bitterness. Still edible though. (Definitely nothing like the awful flavor of Poncirus trifoliata)

The inside juice segments are not very big, but they are decent enough. It kind of reminds me, not surprisingly, of a Yuzu, a little bit dry, not very juicy. But enough to be edible, if we are talking about foraging or a survival situation.
The inside kind of reminds me of an unripe lime, I would say would be the best description.


I also did not notice seeds in the fruit. There was maybe one shriveled up seed that does not look like it will be viable. But then there are tiny little orange gel spot segments where the seeds should be, in each segment.


Something about the aroma of these fruits seem to go very well with Bombay Sapphire East gin.


I am actually a big fan of these fruits. But that is just my personal opinion. I don't want to get anyone else's hopes too up. I am a huge fan of sour-aromatic things like lemons.
I mostly like these little fruits due to the unique fragrance, which is sort of comparable to Yuzu but more on the lemon or citron side.

I'm pretty sure the majority of you will not like them as much as I, so take that into consideration.

(These are of course like a sour lemon and worse fruit quality than a normal lemon, so many people are not going to find these to be edible, except for the more adventurous types of persons who like tasting strange things)

However, I do have to concede one thing, and that is that after eating a whole fruit, they do not really sit the best in my stomach, and afterwards I am burping up a sort of skunky taste, which I did not really notice so much while I was eating them. It's like they have an "off" flavor that only kicks in a minute or two after you eat it, after you have already swallowed. But I did eat the whole fruits with the peel and rinds. 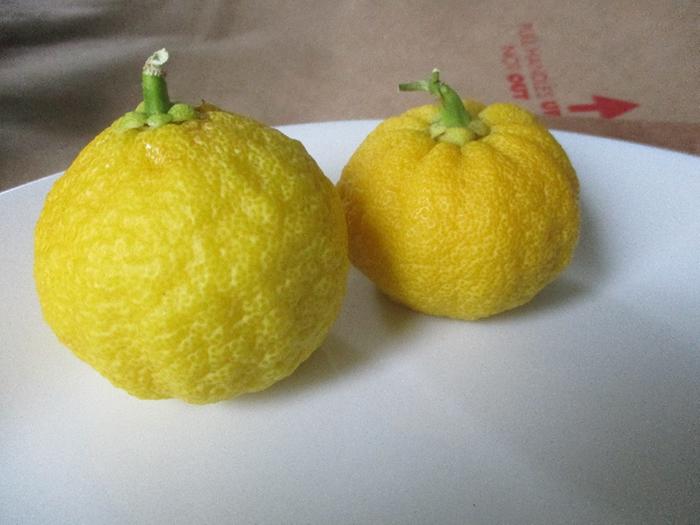 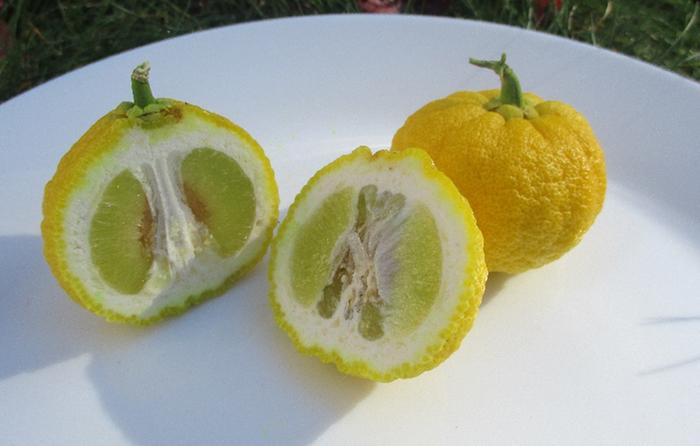 Parker Turtle wrote: That is, if any of you are even able to get your hands on these varieties, which can be very difficult.


Thank you for your experiences.  Could you share where you sourced yours?  I know that One Green World offers Yuzu and Sudachi.

Posts: 8
2
posted 2 months ago
picture of Yuzu fruit I picked from the tree, cut open

Actually, the flavor isn't that bad, like lemon and a sour Clementine, although it's kind of dry, not the most juice, and it was very seedy. I ate half the fruit.
The peel of the fruit is also soft and mostly lacks bitterness, I almost kind of enjoy nibbling and taking little bites out of the peel.
If left on the tree very long, the fruit almost develops a very slight guava-like nuance to the aroma. 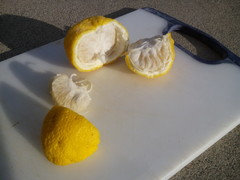 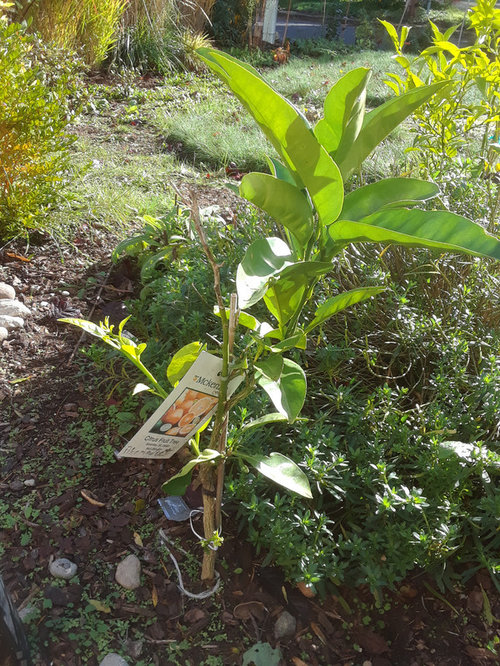 Great topic and thanks for all the good information. I am in 7a so I figure I will at least need a temporary cover to use in conjunction with a microclimate to grow anything more than Trifoliate Orange. We regularly get temperatures into the teens here, single digits are rare but possible.

I was considering having cold hardy citrus either growing alongside a south facing wall with a temporary cover for low temperatures or just buying/building a conventional-ish greenhouse. Keep the citrus either dwarf varieties and/or espaliered to fit either scenario.
Reid Brown
Posts: 1
posted 1 month ago
Hey there,

Curious, any updates on your endeavors?