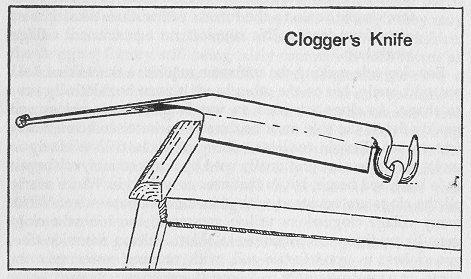 I've been wondering what this tool was called/for ever since I saw it in a youtube video a few years ago. It is a clever lever knife used for carving clogs! (and other things)

Wikipedia calls it a stock knife.

I can imagine how having the one point fixed allows you to do a lot of precise work and put in a very controlled amount of force. This is going on my list of tools to have my local blacksmith forge for me in the future (along with a froe and some holdfasts).

I'm probably not the only one, but for me finding out the name of traditional tools is usually the first big part of the battle of figuring out how to do traditional crafts well. I'd love to make an encyclopedia of crafting tools one day.

posted 1 month ago
I'm sure I saw some videos linked on Permies, not sure where they were though?

I'm sure the other was one of someone carving tent pegs if that helps.

Nancy Reading wrote:I found one of the other threads that had some video links:
https://permies.com/t/169915/Wooden-shoes#1344739

I'm sure the other was one of someone carving tent pegs if that helps.

I forgot about that shoe thread. Jeez I have a lot of projects to get to one day...

This stock knife will probably accelerate several of them. Though I'm sure there's a learning curve.

The shaving horse has so far been the biggest leap forward for me.

How to use it


Looks like a lovely thing to carve with - seems safer having at least part of the tool anchored, rather than having to hold everything with your hands!