gabions - combining the wisdom (and time saving) of a stick built house.. with earthbag designs?

Brian Shaw
Posts: 22
6
posted 1 month ago
Hi, i've been kind of idle for a bit focused on college and health issues, but now that i'm hopefully ready to move onto a next phase planning for an off grid alternative house is at the forefront of my mind.

I've loved the earthbag design for a long time mostly due to it's frugality.  I've watched a discussion of alternative fill materials pooh poohed because then it's no longer dirt holding the form of the house together if bags rip over time - gravel being dissed a bit, although what i've always wanted to do was things like scoria, perlite, volcanic rock, maybe even ricehulls.  Things lighter/easier to handle and more insulative, but perhaps if bags rip that's a problem.  Though having seen someone use netted bags (even cheaper than earthbags) and i'd think blocks of volcanic rock especially would interlock to some degree the individual bags together if the plaster held the outer wall parts together...

Time is money in the building of a house but also in my rambling.  I better jump to the point.

A house is going to cost in either time or dollars and you can switch things from one to another based on which you have an abundance of.  Going for absolute zero dollars if it wastes time isn't a winner for me, just trying to minimize total all in cost.  Ie the hours of work i'd have to do at a wage job offsetting the cost of a better way to do a thing.

What I most like about the earthbag design is youre basically taking a cheap container, and filling it with a cheap or onsite/free fill material, and that it's viable for making domed roofs and foundations as well as the walls when the walls are usually the least expensive part honestly.  (strawbales using an expensive conventional foundation and roof making not alot of sense for me and not even saving money much of the time by what I hear)  Heck you could almost put stick built walls up to save time (as earthbags are a big cost in time and hassle per cubic foot filled whereas the walls are the cheapest by comparison to roof/foundation) and things like that is almost what i'm now thinking...


We need to rethink the container, along with the fill materials (only a little bit).  Why aren't we already doing this?  https://en.wikipedia.org/wiki/Gabion 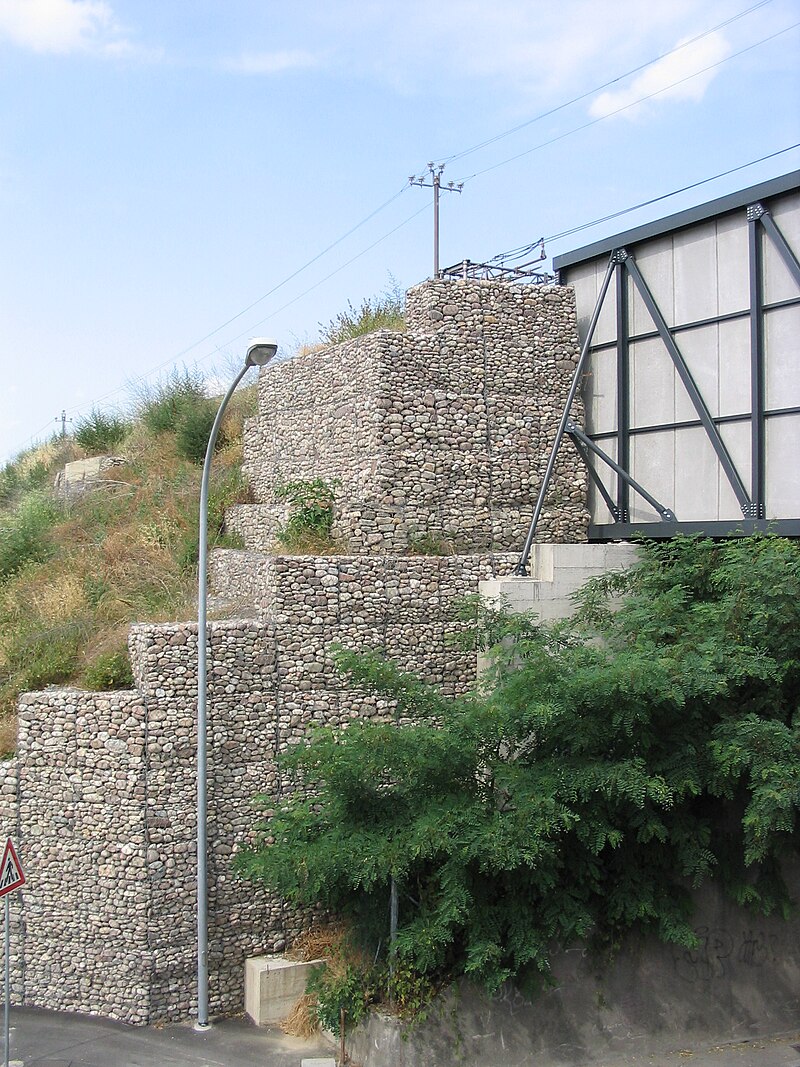 Stick built houses are about SAVE TIME SAVE TIME SAVE TIME labor is expensive in the first world.  I'm going to college still (trying to finally transition into grad school, it's taken longer than normal because i'm disabled adding further problems to my ability to do high volume work when an earthbag house is already ALOT of work) and holding off a career to build a house I may need to be living in before I even finish school is now a reality.  So i'm going to be balancing more college work with trying to build an off grid house.  I dont have the time!! D:

Or we need to rethink it.  Stick built walls go up fast - posts, container (the walls) for insulation, the insulation itself.  Honestly about like a gabion container, except these metal crates stack!

The mesh is too coarse - not a problem, lets add some finer grained webbing - like the kind used for vegetable and onion bags.  (I forget the term but I already saw someone planning to use it for earthbags and its even cheaper than bag-bags)  Even if the bags eventually degraded the gabion containers themselves should prevent any large scale sideways movement of the wall.  Or use chickenwire for finer mesh that will keep volcanic rock in place for instance.

Yes the containers are too wide - were not building a pyramid, I get that, but that's another 'mistake'.  Earthbags self stack atop one another and have to be a certain width to get a certain height.  So lets go back to the wisdom of stick built houses - just put in some framing.  But let's make it super low cost, simplified, or even on-site type framing.  Like reusing telephone poles, or rough hewn felled trees instead of 2x4's to stick through the gabion cages so that you have more vertical stability.  Don't get too earthbaggey in your thinking, framing isnt BAD it just isn't as cheap as it could be with modern wood esp with rising wood prices, plus we'd like to use less.  You even might be able to use reclaimed metal from some source or another I haven't fully thought through yet... i'm just publically brainstorming.

Under for a foundation i'd be concerned about the metal cages lasting as long as they would above grade so i'm fine doing rubble trench or any number of other things there.

The roofing, normally the most expensive part, the idea of using gabion crates and finer mesh or polypropylene inside, but this time filled just with rice hulls - one of the lighter bulk materials (a little nervous about having anything heavy overhead in a design like this) that's an alternative to fiberglass and it's health/inhalation issues which I don't like.  Alternately I might use recycled styrofoam, which could even include bags of packing peanuts (are those fire resistant?) thrown into earthbags.

Things like running utilites thru the wall become easy if you put things in place before filling the gabions with volcanic rock.


Now big thick metal like the picture with the rocks wouldn't HAVE to be used, part of that is for weight and stackability among other things, if were using much lighter infill it will be less.  Heck it could even be non metal - there might be fiberglass or other alternatives that would work here.  Are you familiar with Hesco barriers like the army uses and which they can quickly fill with two dumps of a forklift?

So sound off...  brilliant, stupid, or somewhere in between?  What problems do you see if i'm set on attempting this anyways?  Really what were doing is designing what amounts to a house of lego-bricks where each lego brick is really a wire-basket-container, with or without inexpensive/improvised framing (when the framing costs less than a thicker wall and it's infill, we use framing, if freestacking and optionally wiring together cubes for stability is cheaper, we do that) and able to use bulk inexpensive insulative materials approaching superinsulation levels even if the per-inch rating is not spectacular.

The simple fact is that I need a house design that's inexpensive in both hours AND time and can go up kind of quick-ish, and it's fine if I expand it later - honestly the big lego like cubes seem like it'd be easy to start with a one room tiny house and later expand things the 2nd and 3rd summers, squares being easier to do this with than round and oval shapes to some degree.  I need something the size of an RV (any size RV, not just the 40 foot monsters) that I can finish the first summer despite being less than fully physically abled between me and my girlfriend after which we don't mind adding the same or more square footage in future summers.

posted 1 month ago
Gabions are great if you have enough of the right material for it.  I just bought an old gravel pit and I have mountains of 2-6" rock for material.  I plan to build quite a few walls and fence line using gabion.

I see companies selling stainless steel cages for them, but I plan to use something like cattle panel from tractor supply.  I can always coat the cage if I need to bury partial.  Its galvanized and I have been using it outdoors for 10+ years without an issue.

What area are you in, most of the buildings I have seen so far are in warmer areas.  Not to say I can't make it insulated, I am in northern Michigan.  I could see possibly integrating a RMH into your walls.

Let me know if you build something.  I would be interested to see.
Anne Miller
master steward

posted 1 month ago
I was pretty sure I had seen gabion houses on Pinterest so I looked and yes they are there.

You have a great idea.

Maybe these will help you figure out how to do what you are wanting to do: 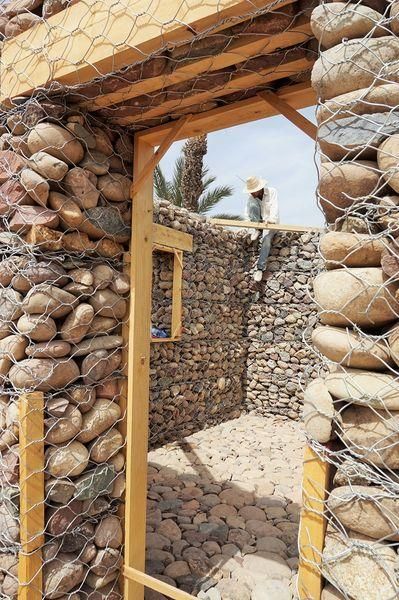 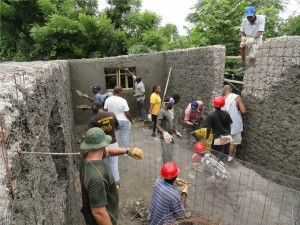 You can even buy the cages: 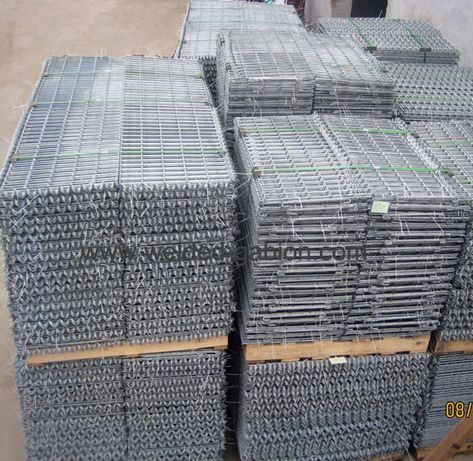 This cordwood house uses the gabions for the foundation: 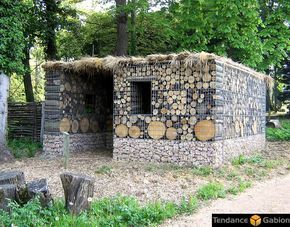 posted 1 month ago
Brian, I have to tell you that building a home will cost time or money as you have said and hard work.
I use a different mindset about house building.
Nothing is cheap or expensive- its affordable or not. Because those words are too general they distort reality.
I look at the cost of components and note if they are beneficial or not. IE Earthbags save time, and the money used to buy them would buy a window for instance.
If I wince everytime I spent money the job would not start.
PLANNING I go through this process;
- total cost I hope it costs
- amount of money I have
- What do I want?
- what do I need?
- how much time is there to complete it?
- how long do I want to spend doing the work, compared with getting help or prefabricated parts?
- what size. roof material, windows etc
- where will I build it, what direction will it face?
-what materials and building technique?
Materials I have used;
- adobe
- stick framed 150mm thick walls
- strawbale
- rock and bricks
- tyres filled with earth but not as an earthship
- concrete
- recycled anything
- repurposed items which can be turned into a building material. IE Coolroom panels
- old street sign posts
- bolt together garage and relined
- secondhand building
If you live where it rains, concrete foundations are necessary to prevent movement and water creeping inside if you use earthbags.
Do you have any limitations in what you can physically do?

Posts: 3778
Location: Upstate NY, zone 5
305
4
posted 1 month ago
If you live where it rains, concrete foundations will wick damp up to the walls, and must be isolated with waterproof membranes or other methods.

A rubble trench foundation with stones and little sand or other fines near the top will give the damp-resistant construction you need, and if deep enough or well insulated and on a good subsoil will not shift after initial settling.
John C Daley
pollinator
Posts: 3291
Location: Bendigo , Australia
274
I like...

posted 1 month ago
Glenn you are correct about the variations of the foundations and the need for moisture barriers.
But concrete for all its issues is fast and easy.
You need a lot of local rocks and heavy labour to collect and install rocks.

Posts: 3778
Location: Upstate NY, zone 5
305
4
posted 1 month ago
Yes, it's a matter of resources and time. If you have lots of rock available and the stamina to move it, rubble is great. If not, concrete works as long as you handle it right.