posted 10 months ago
Everyone praises mulching to prevent weeds, provide habitats for useful insects and microorganisms, moderate soil temperatures, decrease soil erosion, increase water infiltration and soil moisture, increase biological activity within the soil and with the right type of mulch – even feeding the soil as it decomposes and increasing nitrogen content…

I get the principle, and I totally agree with it.

In my specific situation:

It seems that any organic mulch (chop and drop leaves and twigs, straw, hay, compost, wood chips, sawdust, pine needles… those are the ones I tried) simply dry out and oxidize…

It takes years for even the tiniest, most fragile leaves to decompose and I suspect that more nitrogen is used for the decomposition process than what is eventually being made available for the plants.

And worse – these types of mulch often prohibit the little soft rain we get to actually reach the soil.

We Needed Another Solution
After years of observing our mulch doing nothing much, I chose to change strategy and focus on perennial living green mulch.

We started with drought tolerant herbs, mainly thyme, sage, and oregano, as well as lotus berthelotii – a beautiful, endemic to our island, perennial creeper… 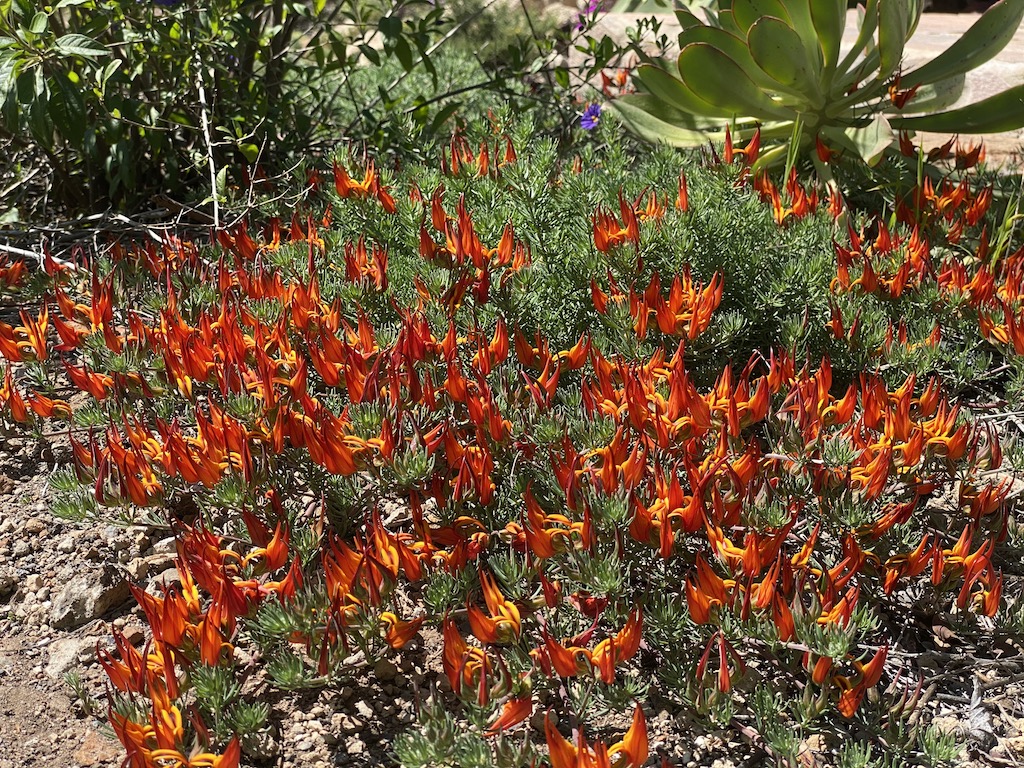 But, at the end, we moved almost entirely to an unexpected perennial ground cover…


I couldn’t find anything online about successfully using succulents as living mulch, but it just made sense to me – so I chose to experiment.

I took a few cuts from different succulents and without ceremony, growth hormone, or soil amendment – I simply planted them in little, shallow holes all over the property – keeping them 1m/3ft from the trunk of any tree.

I did that after the first rain, knowing that for the next few days it will rain some more.

15 Months Later, here are some pictures to demonstrate the results after just 15 months… 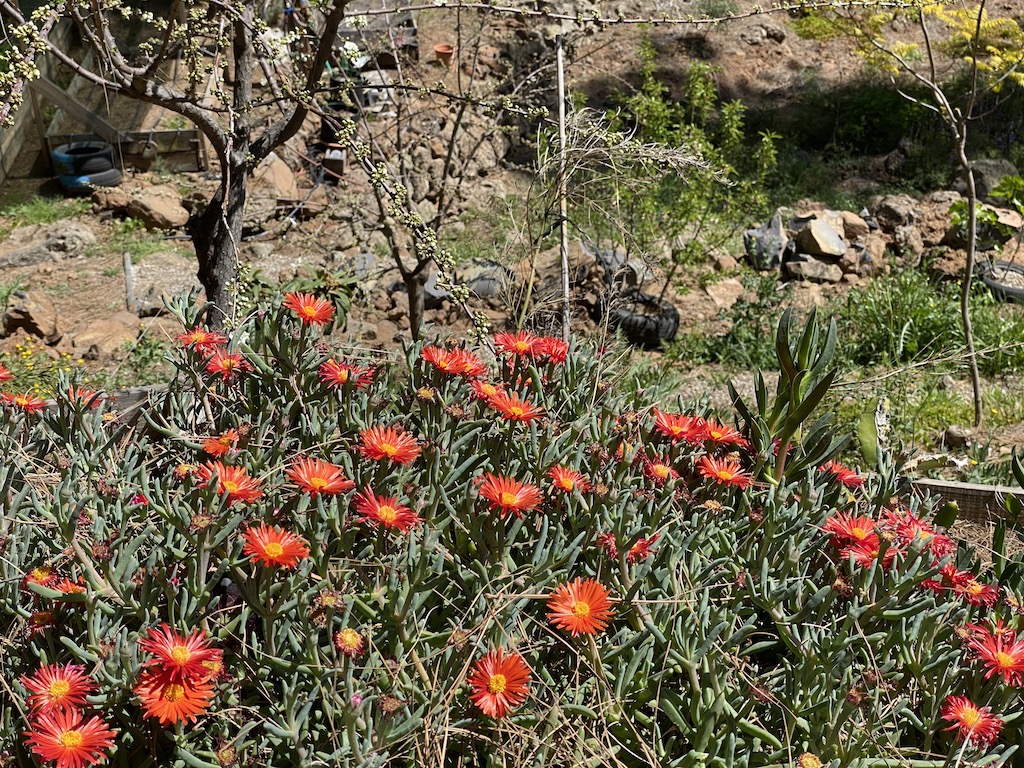 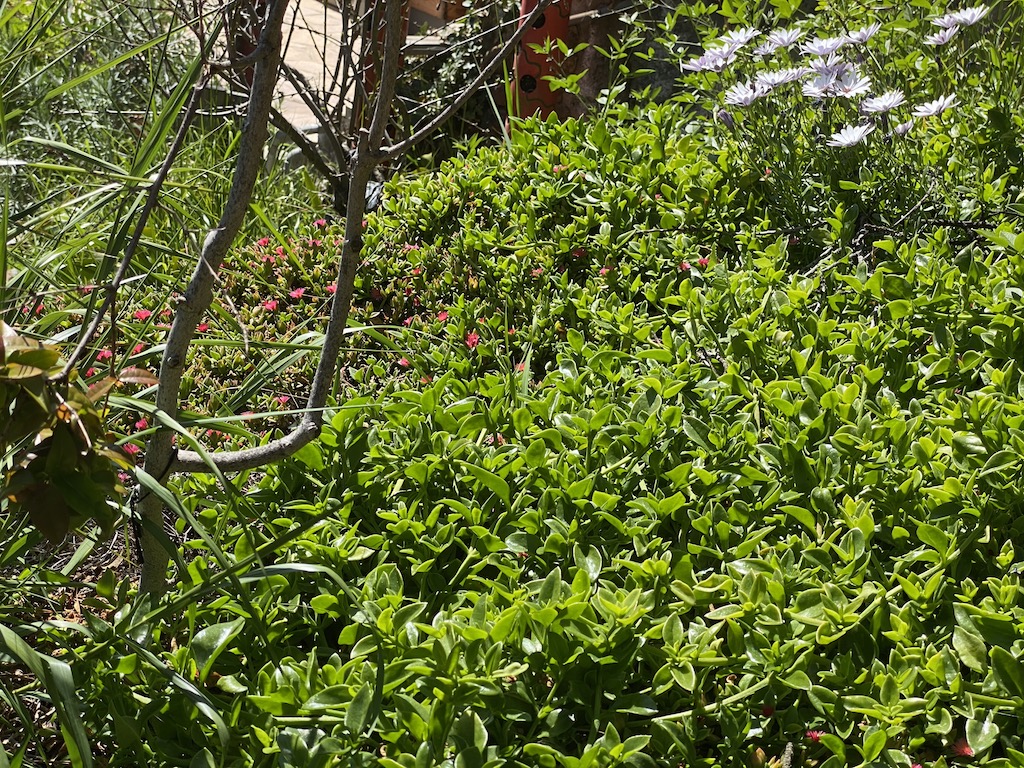 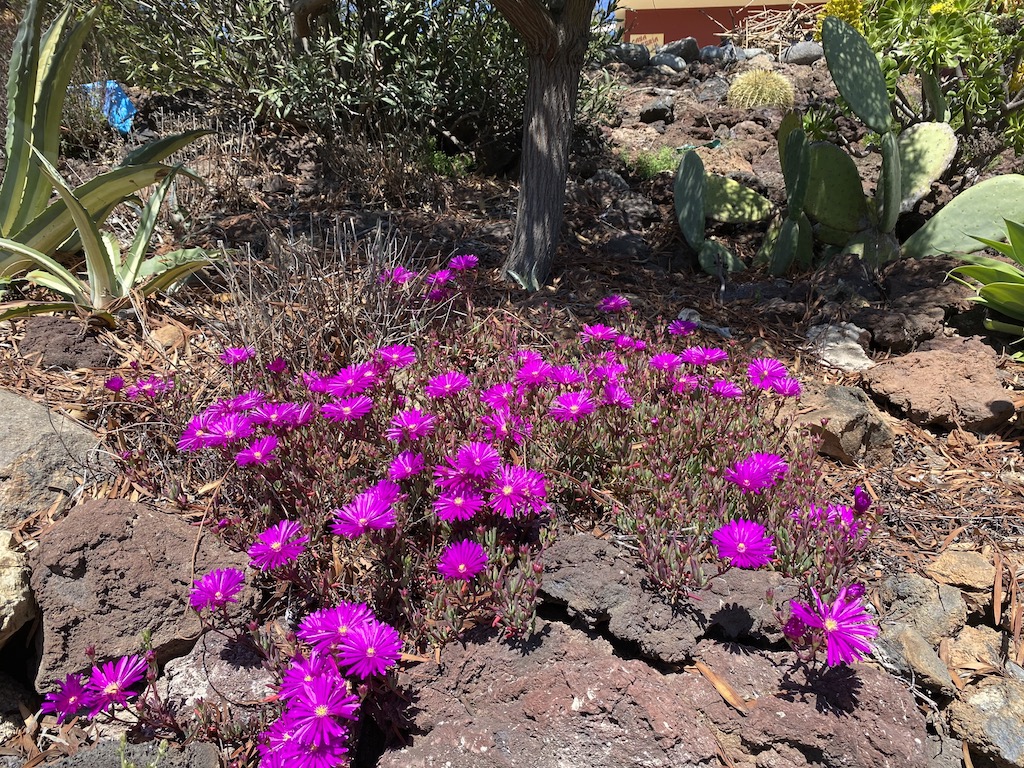 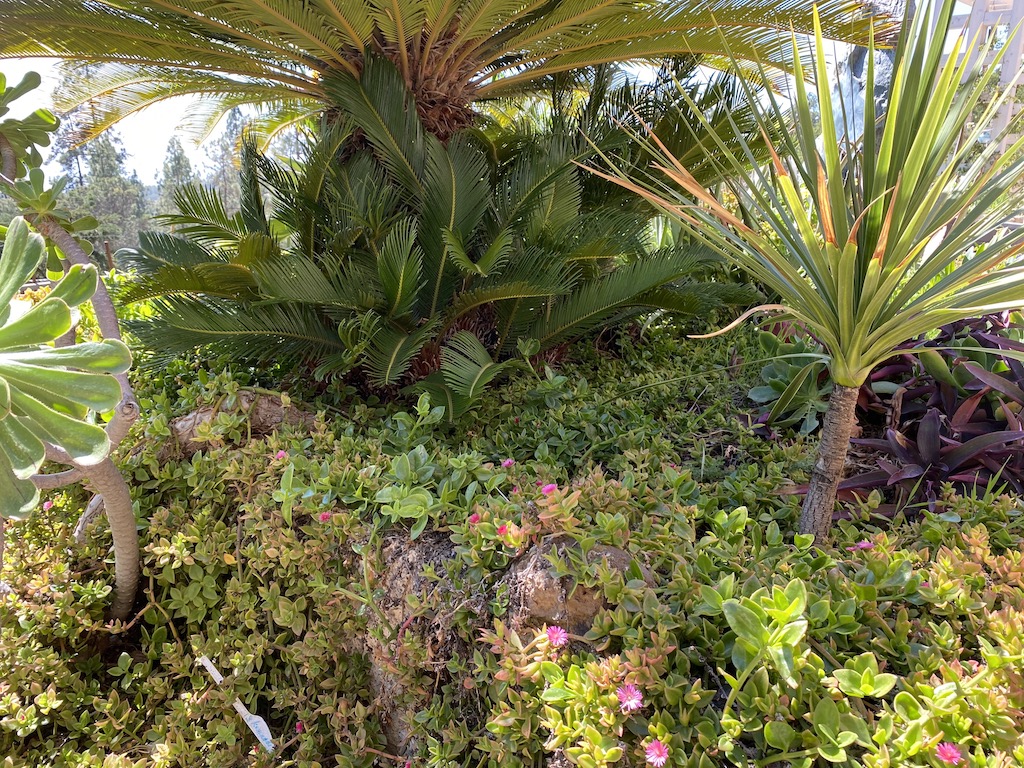 Bear in mind that each of these succulents started its life as a tiny cut – not bigger than my finger, and got no irrigation whatsoever, even during the harsh summer last year (many days of up to 40C/104F) and no rain for 7 months.

When I lift the crawling brunches, I see quite some life in the dark soil.

When I touch the soil underneath it’s definitely cooler than the soil nearby, and after any precipitation it stays moist for weeks or longer, while the adjacent bare soil dries up within hours.

Unfortunately… succulents do not provide nitrogen to the soil… not through their roots, nor through massive dead leaves.

So to amend it, we first mulch the area with compost and nitrogen fixing twigs and leaves (mainly from our tagasaste and acacia trees), make holes in the mulch and plant the succulent cuts into the soil.

This way the succulents grows over the mulch, and by keeping the soil moist and cool for longer period – it helps the soil microorganisms break down the nitrogen loaded mulch underneath.

Am I Crazy here?

I know it’s an unconventional living mulch, and I wish I could find some more research-based conclusions that are less anecdotal than mine.

But… when I compare the areas in my forest garden that has been covered with succulents to the areas I used traditional mulching – the difference is stark in favor of the succulents.

I would love to hear your opinions, experiences and recommendations for any living mulch for a mediterranean climate…

posted 10 months ago
Excellent choice of ground cover.
They grow outward. Would it help to shove leaves and debrus under the newest outer pioniers and let it be?
Sure a feast for insects as well as for the eye.
Have you tried summer purslane? It can form thick layers as well. Hardly needs water and is super nutritious!
It sure would be nice if you could grow a nitrogen fixing shrub. Must be something on the island!

Hugo Morvan wrote:Would it help to shove leaves and debris under the newest outer pioniers and let it be?


Great idea, Hugo... I'm gonna make it a monthly task... one day of shoving mulch under the succulents.


I've heard about it, but never saw it on the island... Gonna look for it. It's annual, though, isn't it?


Hugo Morvan wrote:It sure would be nice if you could grow a nitrogen fixing shrub. Must be something on the island!


I'm still looking for the right ones... but for living mulch I prefer perennials that grow very low... well... lower than shrubs.

Thank you for your valuable contribution and make it a great day.

posted 10 months ago
Thank you Neta. This looks like an interesting candidate for your project. A local clover called bituminaria bituminosa.

I do a lot of clover planting, white dutch clover. It can be stepped upon.

Hugo Morvan wrote:Thank you Neta. This looks like an interesting candidate for your project. A local clover called bituminaria bituminosa.


ABSOLUTELY, Hugo.
We have it everywhere in the garden (no need to plant it, it's a "weed").

I knew it's immensely beneficial as fodder (it's locally called the "goat plant"), and because its roots protect the soil from erosion.
What I didn't know, until now, that it's a nitrogen-fixer. WOOHOO!

You made me very happy...

It's nighttime here, but tomorrow I'll go out and take some photos for you.

Make it a great evening...

posted 10 months ago
I have a plant that makes a great ground cover though it is not succulent. It is a Blue Pimpernel, Anagallis Monellii 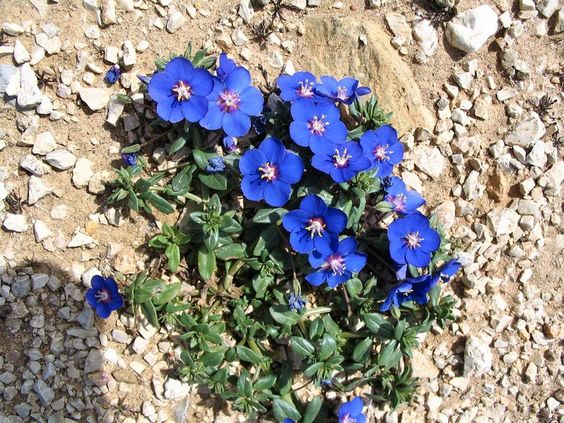 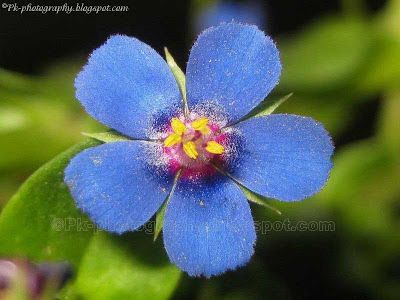 
Most people are familiar with the Scarlet Pimpernel, Anagallis arvensis: 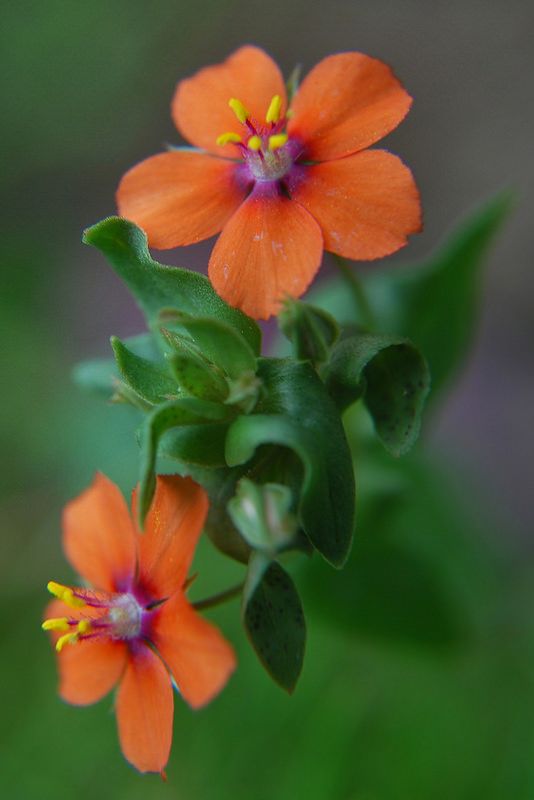 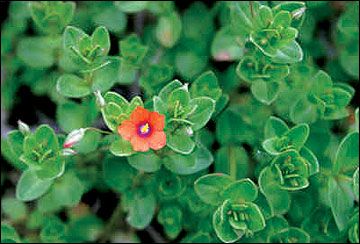 posted 10 months ago
Another advantage of living mulches, particularly succulents, in a mediterranean climate is that they would be less of a fire hazard than dead plant matter.  They must still build up into soik over time as well I guess though.

Nancy Reading wrote:Another advantage of living mulches, particularly succulents, in a mediterranean climate is that they would be less of a fire hazard than dead plant matter.


Great point, Nancy.
We’re in a middle of a pine forest, and a forest fire is a major and very real risk... so anything that could slow fire spread is invaluable.
Thank you for reminding me...


Here it is, Hugo... one of hundreds Bituminaria bituminosa all over our property: 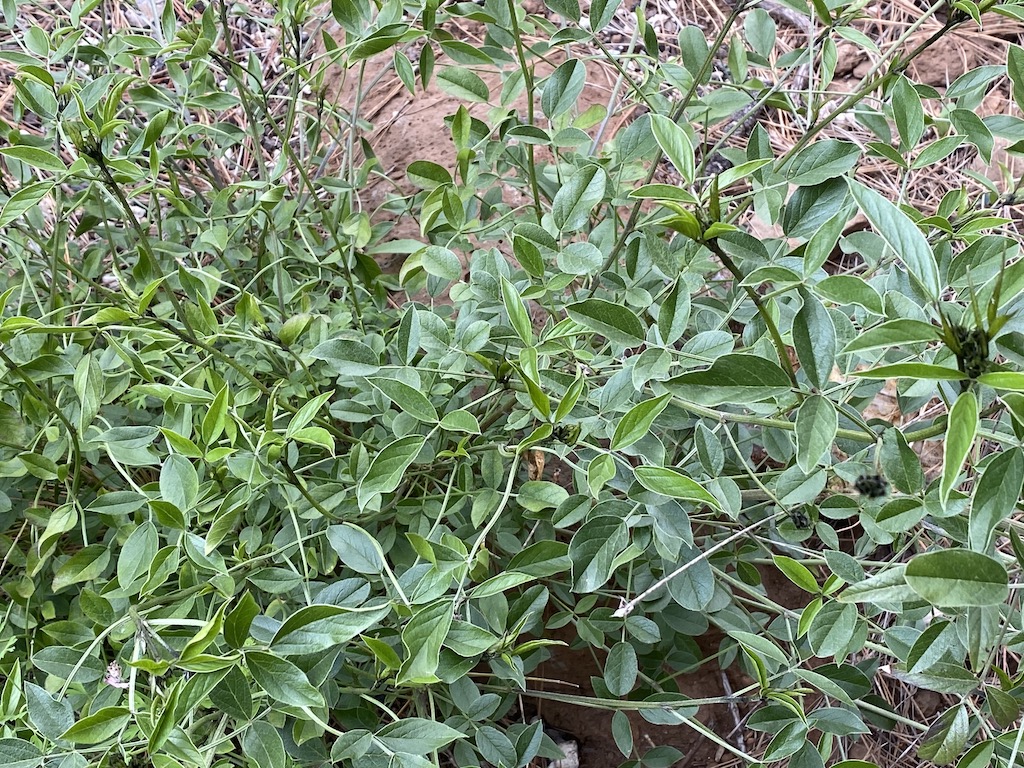 In a couple of weeks it will flower, and I'll be able to get better pictures...

posted 10 months ago
I heard that Phlomis fruticosa (Jerusalem Sage) and a couple of other Phlomis varieties from the Mediterranean might be really good as ground cover for a sunny hillside, and are very drought tolerant.

Anyone has experience with those...? 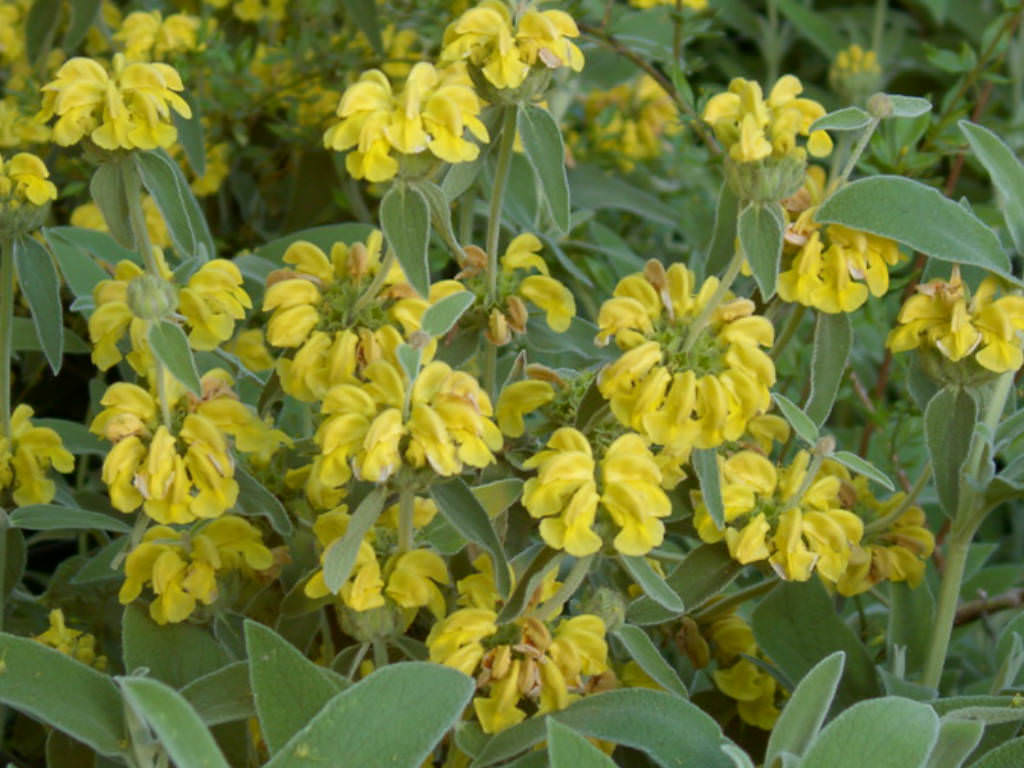 posted 10 months ago
Aha that’s what they are, Jerusalem sage. I wondered for years. They got fussy leaves. There’s more of them every year. I’ve held a giant clean up because they popped up all over the place. Never look thirsty where i live.
Their bottom leaves are quite big and overlap. Weeds don’t stand s change.
All added up. Good living mulch.
Did you check out if periwinkle grows that far south? Here it growth happily on south facing sun exposed slopes.


Yep... bigleaf periwinkle (Vinca major) grows on the island.
Need to look for it though... never saw it around here...🤔
Thanks for the tip, Hugo