Merit badge: bb list bbv list
Forum Moderator
Hugo Morvan currently moderates these forums:
I am a carpenter/mason/gardener etc, living in France, Morvan. Have small garden with about 200 different plantspecies a small natural pond, wild fish. Share a veggie plot/tree nurserie/mushroom grow operation with a local bio cattle ranger, it is being turned into a permaculture style bio diversity reserve. Seed saving and plant propagation are important factors.
Every year i learn to use more of my own produce, cooking it, potting it up. As well as medicinal herbs/balms. Try to be as self sufficient as financially possible without getting into debt. Spreading the perma culture life style and mind set, which is the only sustainable path forward on this potentially heaven of a planet we are currently ravaging with our short sighted and detached material world views which lead to depression, loneliness, illness, poverty and madness.
France, Burgundy, parc naturel Morvan
Apples and Likes
Apples
Total received
369
In last 30 days
1
Total given
444
Likes
Total received
1778
Received in last 30 days
3
Total given
2394
Given in last 30 days
0
Forums and Threads
Scavenger Hunt

Clueless about Asparagus...
Bre Rich, why not make a mountain or dyke like structure on top of all that clay?
Some nice mix with lots of organics. They don't like wet feet i've learned in this topic. Amongst other things the wonderful permies community has made clear i could have done better to succeed with my aspergus.
I've planted quite some varieties and forgot all their names. One has loads of red berries. So i'll be ready next year to do it right with an interesting crossed variety. 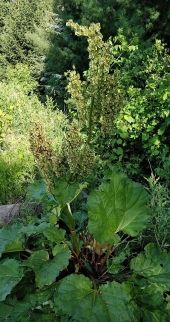 Saving rhubarb seed?
I got a lot of flowers from different plants, i don't know the names of the varieties. I' ve let them  go for the insects to feast on.
To my surprise the seeds did germinate.
I had edible sorrel flowering not far.
Any info if this will cross?
I'd love the rhubarbs to cross amongst themselves, start a landrace. But if they cross too easily with other rumex types that would be a problem.

show more
2 months ago
seeds and breeding
Landrace in the Mediterranean: dealing with heavy clay, ants, snails and other wonderful things
Hola Antonio.
What a nasty trio of pests you're dealing with.
The farmer I work with has dumped tons of clay on our poor acid granite soil. We've grown potatoes in them. When it came it was wet and lumpy. I just had to push the potato seedlings in the crevices and cover with some compost and mulch that. They grew well but then the clay lumps hardened,the potatoes pushed themselves out of the crevices and got green. Still managed to eat all winter of those potatoes and had enough potatoes to start bigger this year.
Why I say this. Because after the harvest the long mount of clay was barren and had to be planted.
Since I save loads of seeds I had a lot to work with.
We don't have this ant problem so this will probably not work for you. But anyway I seeded Claytonia and corn salad and golden beets and andives and alfalfa and lettuces. The lettuces are a four season variety which is self seeding even in a lawn sometimes.
I didn't weed a lot, just made sure nothing but this grew there. The corn salad did extremely well and grew into a cover crop like mass which blocked seeding wild plants from germinating.
I just leave it. And will plant by just removing some and dig a hole fill it with water and get out more clay.
Make a column and fill that with damp compost.

The slugs are terrible this year. I feed them wild herbs that decompose around my transplants. They did prefer those over my transplants at first but now they are big and eat all.
Some plants they will not touch though. My cucumber this year is safe. Most of the beets, the pumpkins and butternuts have been left to grow.
Now they re at the stage where they get into that exponential grow rhythm. Only a massive  slug attack could hold them back.
Mind you I always dreamed of just seed by hand since I've started Joseph Lofthouse landracing.
I am still transplanting.
But with so many slug voiders I will be able to save as much seeds as with the corn salad that I use as a cover crop. I can give it a go next year.
But I have no seed hauling ants.
They do in the south of France where my girlfriend and Pascal Poot live. I wonder if Poot has crops he can seed by hand?
My girlfriend says the snail pressure is immense. They have tiny ones which carry a house on their back. If you're silent you can hear them chew.
What kind of snails do you have?

A good thing I discovered was that the Jerusalem artichokes I use as a wind break and sun trap triple function as a climbing rack/support for my snap beans. The trees i seeded start to produce shade and block grasses and wild native plants.
The chenopodes I used to erase are delicious in fact so I let them go to seed and will try to use them as a cover crop next year there where weed pressure us high. They are good to eat and use as a mulch.
Do you have a pond? It might attract insects etc that deal with plagues in unexpected ways.
Also leaving stems of umbelleforae dies a good job of increasing biodiversity.

Anyway hope this story has some points that can help you stay positive. Because only continuing the struggle will make us the examples we need to be.
By the way I have been protesting loads for freedom and sharing my seeds at demonstrations with strangers. Now I hear good things about their effectiveness.
Those folk will become growers that will save seeds and spread the landrace revolution.
All the best
show more
3 months ago
mediterranean climate 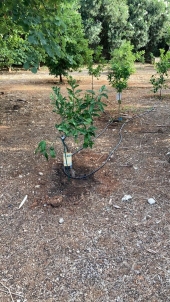 Project: Intense Food Forest in the Mediterranean Coast of Valencia, Spain. Land rehabilitation
Hi Antonio
Great you have help
I try to motivate other dutch permie residents in your region to read your blog
Many young people want to migrate to Spain and Portugal because of the new rules
Things are moving here as well
Groups are forming who want local organic lifestyles
I ve been going to demonstrations a lot handing out adapted seeds to people wanting to garden
Did you check out Pascal Poot his seeds?
He lives in south of France in a hot spot and grows plants without watering or chemicals for twenty years or something
He only saves seeds from disease resistant plants
I live a thousand km north but bought quite some seeds for my landrace of him
I went there his farm is at five minutes from where i took this pic
The soil was like a tennis court
If you need help with the French pm me
Cheers Hugo
show more
7 months ago
mediterranean climate

Simple fence of black locust with beans to break wind
About half of my projects go as intended. It used to be a third. There is bad luck involved, neglect, laziness and sometimes stupidity.
But it’s ok.
It’s fun and i learn of my « failures ». Next year i’ll get a traditional bean set up.

The structure is flimsy! True! But i still have some time to grow the grape vines into them!!! I’ll cut some more black locust this winter. And add to what’s there already!
show more
10 months ago
fencing

Dutch white clover as inoculated wood chips pathway cover crop.
The redwinecaps keep popping up. We’ve had an extremely wet cold summer this year. The clover went nuts and took over all the beds. Growing over thyme hedges and killing them.
I’ve used loads of clover as mulch. I’ve kept it down by bushcutting it. A rogue cow herd briefly past a few weeks ago eating it short.
I just started dumping straw on top of it. Which kills off the weaker ones.
Bees loved it!
Worms adore it! They have become so abundant in the garden the chickens keep escaping and laying giant eggs.
Things go really well. If i need a bed for growing i just rip out handfulls of creeping clover one week come back the next and dig up the harder cores which try to regrow then seed or plant the seedlings i have grown in the greenhouse. I have to keep an eye on them when the seedlings are small.
So it’s work. But so is running after woodchips or hay or straw to feed soils.
All in all i’d say it’s succesful so far and could be really advantageous in a hot dry summer.
show more
10 months ago
cover crops 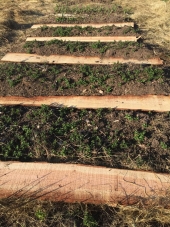 Log slabs as pathways... bad or good idea?
I’ve used them everywhere and they’re great. They shelter snails like crazy. Some are favorits some attract few. My chickens love snails for some reason so they were happy. They sheltered panthersnails which eat normal ones so they got spared.
I saw hazelworms and killed one young by stepping on it. Yuck.
They harbored the larvea of many bugs including rare giant rhinobugs. I don’t know their scientific name.
They are awkward by being slippery which keeps unwanted old people out.
They harbour the mycelium of the red winecap mushroom which florishes and devours whatever unfortunate plant lived there before i dumped the slab on it.
They kept the dutch white clover in check which attempted a gigantic take-over this year.
Simply i love them!
show more
10 months ago
mulch

Simple fence of black locust with beans to break wind
It was a complete disaster. Snails ate most of my bean seedlings i protected them with cut off waterbottles over them. There was not enough sun this summer without summer. There was a lot of rain which woke the topinambours/sunchokes which i had planted years ago. Blocking the beans out of sunlight even further.
The wind got kind of blocked but therewas noneed for that anyway.
Weird climate chaos.
show more
10 months ago
fencing 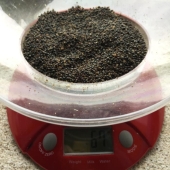 Critters in my Russian Red Kale seeds
I put them in the freezer. They germinated fine.
show more
10 months ago
seeds and breeding

Mare's Island Garden
Hi Mare. I came across this topic and thought it might be interesting for your situation.
https://permies.com/t/166061/Pascal-Poot-tomatoes-grow-water
show more
11 months ago
mediterranean climate