Posts: 508
3
posted 10 years ago
Curious if anyone here has tried this  out. Some sunflowers will grow up to 12 feet high and a neighbor who grew some of these giants had to take a chainsaw to the stems and then the pull the roots out with a truck afterwards. This got me to thinking..

If you got a temporary fenceline planted with these monsters  how would be the best way to proceed after the first year? I am assuming that they will mostly feed the birds or get harvested  so there won't be a LOT of random sunflowers coming up everywhere later.

use them to grow vines on and replant more sunflowers the next year? how close could you do this and expect the new sunflowers to thrive? Jerusalem artichokes (in my VERY limited experience with them) seemed not to share very well with anything else, do sunflowers tend to be the same, or would it be just a function of their sheer size shading everything else out?

I was thinking that a nice little line of maybe a foot or two wide of old giant sunflower stalks that had been planted close together and later covered with vines might make a nice boundary fence...Some of these sunflowers have hollow stems so it might be important to be sure to get the ones with a solid stem?

You could plant them much closer together than suggested for maximum  height? Not many people NEED a 12 foot high fence...and the stems might get thicker? or would that just make them all more likely to topple over? Suggested spacing the first year and then an alternate row snuggled up to the first row but offset the second year?

When I heard about the chainsaw I was also wondering if sunflower stalks could be used like bamboo which won't grow in my climate but sunflowers will.

All just thoughts chasing themselves around in my head..any experience/opinions/thoughts are invited.

George Lee
Posts: 539
Location: Athens, GA/Sunset, SC
1
posted 10 years ago
I never got a follow-up,but this is my friends property..He used the sunflora as a windbreak and "sunbreak" at his rental property. He wanted a veil from the sun in those first story windows. They ended up growing as tall as the gutter system. As you see in the other photo, he had clover and vetch as a companion & a few bean plants went in as well. 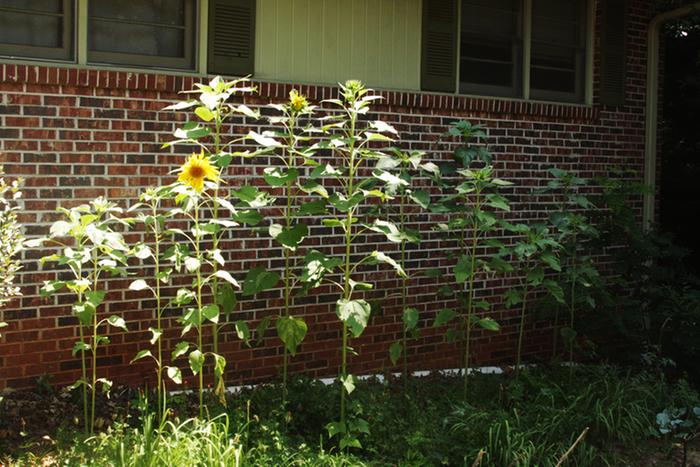 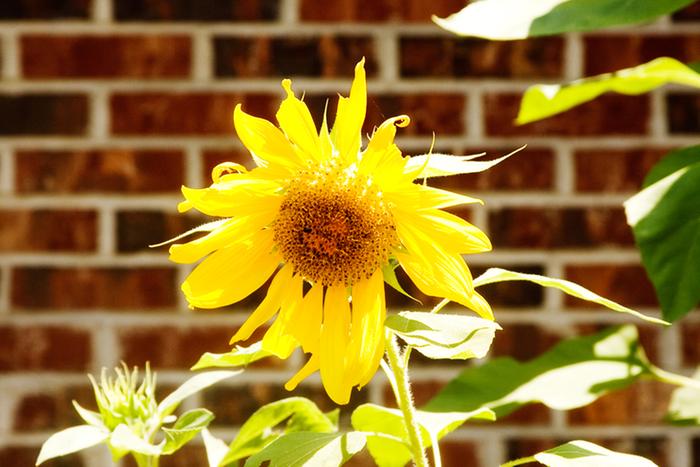 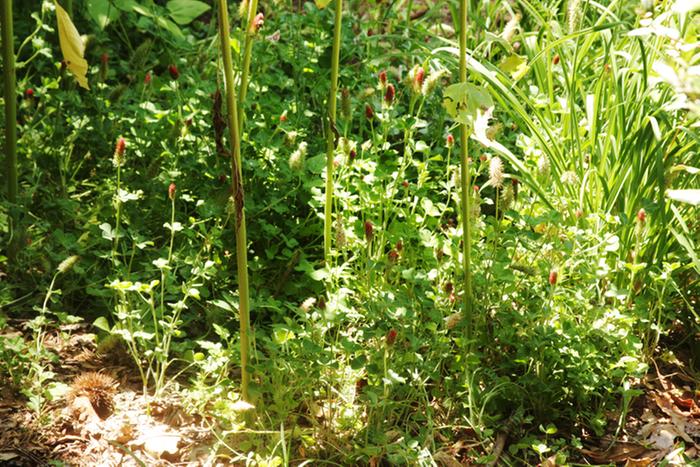 Merry Cox
Posts: 6
Location: Salida, Colorado Zone 4
posted 10 years ago
I am new to replying but have been reading for sometime.
Try the perennial maximillan sunflowers (Seeds of Change or Horizon Herbs). (I live at 7,00 ft in the  very arid west.) They grow tall, are drought tolerant (but get huge if watered once a week), birds love them, they spread like crazy and are easily propagated by diving the tuberous roots. I started mine from seed (Horizon Herbs) 3 years ago and they are now camouflaging my deer fence.
Posts: 508
3
posted 10 years ago
Thanks Merry, and welcome to the forums!

Posts: 79
posted 10 years ago
i dont think is good idea for fence, because theyre gone next year. also for other uses like bamboo, its not wood and doesnt last much...
if you plant them make sure you harvest flowers, otherwise next year youll have them everywhere, birds will scatter seeds and ants will take it under ground so it will survive winter. they are perfect source of oil, so no reason not to eat them. ofcourse choose edable sorts not decorative....
they are relatively easy to grow, they just demand rich soil, preferably semi-sandy... drout tolerant when plant established itself enough....
cucumbers are good neighbours for sunflower, they will use big stem for crawling....
after harvest you can leave stems for some time, and attach flowers to dry, also other stuff like bean plants.....in next spring their roots will rot so you will put them out without problem, and put them to mulch or fire.
Posts: 508
3
posted 10 years ago
Well   what made me think of them was that the  ones  my neighbors grew didnt seem to rot very much at all...as I said the following spring they had to take a chain saw to them and then pull the roots out with a truck. These are not the little  4-6 foot ornamental ones commonly  found at the back of flower beds, these babies mean business.

I planted some this year but was very late getting them into the ground so not a fair trial, they'll only get a couple of months to grow. I'm just hoping to see some flower heads so I will know whether this type sets seed..the catalogue said yes and the seed packet said no. If it sets seed then next year am going to trial it properly and also the perennial ones, if I can find a Canadian source.

Thanks for the suggestion of Jersey Giant, Living Wind.  Only thing is that I TRY to get seed from Canadian sources if possible..fewer hassles/delays at the border, but possibly someone else can use the suggestions too.
Brenda Groth
pollinator
Posts: 4437
Location: North Central Michigan
29
posted 10 years ago
i had an excessive number of jerusalem artichokes last year so I planted some along a west fence and north of a north garden fence..both are growing nicely..it should take about 2 or 3 years for them to make a solid mass..as the soil has not been improved in those areas and they are planted below the sod..but they are up and growing nicely..

they make a wonderful privacy screen as well..and they are perennial, where sunflowers are not.

one thing here the deer do love them..but they don't destroy them, they just munch them in the winter a bit...and they don't dig them up..yet

Alison Thomas
pollinator
Posts: 933
Location: France
10
posted 10 years ago
Mine were a brilliant fence until we had a terrific storm yesterday and the whole lot has been wrecked

George Lee
Posts: 539
Location: Athens, GA/Sunset, SC
1
posted 10 years ago
Anapolis is in Nova Scotia, but I thought this may help.

They have a few sunflower offerings.

Where do you live?  That might have some bearing on sunflower performance, but if your neighbor got persistent giants you probably will if you get the right variety of seed.

I have a lot of suflowers at my place and some of them root in  beyond pulling.  I think they could make a boundary fence, but you might find that the second and third generations of flowers are reverting to wild type.  If you really want the giants, you might need to reseed every year among the standing stalks, or start your seeds and then plant them.

What I have noticed about sunflowers is they germinate early, even before the last frost  here, ev en before the soil warms up.  They are prolific reseeders, and they don't travel far from the parent plants.  I also plant broom corn in the sunflower row, and morning glories, and tall red and bronze amaranth.

I think you could add some ammi majus or queen anne's lace too.

It's going to be gorgeous.  Go for it.