brett watson
Posts: 100
Location: Northern California Zone 8b
1
posted 9 years ago
Listened to the podcast that discussed these guys. Became very intrigued, but after a morning of searching for a direct link to them or some contact info on Greg Houghton and DeeDee McCarty I still got nothin'.

Anybody got any information for me?

Posts: 271
posted 9 years ago
Looks like there are quite a few people out there selling them. I read descriptions on a couple of sites and am not quite sure why they are considered so special. Guess I'd have to own one. At present, it looks like they are  "designer dogs".. a breed in the making. That's how most of our breeds started out. Depending on how far along the development path they are, they still may not be much more than "mutts"..... Not saying there is anything bad about mutts... but ya don't always get what you expect.
Jocelyn Campbell
steward


This is a relatively new breed. It was started by Greg Houghton and his wife, Deedee McCarty of Port Angeles, Washington in 1985. His intentions were to breed for a good farm dog. It is a cross between the Welsh Corgis, Border Collie, Airedale Terrier, Jack Russell Terrier and Irish Terrier breeds.

Though an even better description is at Countryside magazine reply to a reader question about the dog. Here's just a small excerpt:


Greg Houghton and his wife, Deedee McCarty of Port Angeles, Washington started the breed in, I believe, 1990. They concentrate on breeding for personality, tractability, and sturdiness more than how the dogs look--and it seems to be working well. They're a medium size dog with the females in the 35-40 lb. range, give-or-take, and the males 45-50 lbs. or so. Most pups develop a rough-coat (sort of fluffy), or broken-coat (not as long-haired). Every so often one stays smooth-coated. They come in every combination of brown, black, and white; with all brown, brown and white and tricolor being the most common. I think it's really neat to have a litter of puppies where each one looks different. Marilyn Monroe's (the dog in COUNTRYSIDE), morn is black and tan; the first time I took her to the vet he said "Airedale, huh?," and then he told me how Northwest Farm Terriers were replacing Airedales in this area with regards to cougar and bear control.

There is contact info for Greg and Deedee later in that link though I'm not sure if it's current, and, last I heard, they are no longer breeding at this time.

Matt Walker
pollinator
Posts: 324
Location: North Olympic Peninsula
89
posted 9 years ago
I've got one, and she's an amazing dog. There are litters for sale around here fairly regularly. I'll keep my eyes open for you. If you have any specific questions, let me know. I know quite a few of these little guys personally.

Posts: 31
posted 9 years ago
Guys, i've been looking for one of these for a while but they seem very difficult to find.

I'm located in San Diego so anything central and so cal would be good. if you have any leads, please let me know. thanks!

toan
Joshua Smith
Posts: 31
Location: Brentwood, Tennessee, USA
7
posted 9 years ago
After listening to Podcast #25 a few days ago I found this thread. I should be meeting with the originators of this breed, Greg Houghton and DeeDee McCarty, on Sunday. Greg said he was ok with me getting some video of him. I've not done anything like this before, but since Paul's video was stolen from him by an evil Mac computer

, I thought I could give it a try. I have thought of a few questions to ask:

What is his vision for the future of the breed
What are some pros and cons of the breed
what are some stories of great and funny things they have done
has he attempted to get them AKC registered, if so, how and what, if not, why not.
Tips for training Northwest Farm Terriers.

If anyone can give any suggestions for additional questions, I would appreciate it. Greg seems like a great guy who is willing to talk. Paul mentioned how fast these guys are so maybe I can get some footage of them fetching the ball. Any thing else?

This is my first post so remember the rules

Joshua Smith
Posts: 31
Location: Brentwood, Tennessee, USA
7
posted 9 years ago
I have had my Northwest Farm Terrier for a couple of months now. Here is a picture of me attempting to train him to protect chickens. He is primarily a family dog. I'll get a full time outside LGD when I get more animals. This should be just the begining.
Dasher-and-his-new-job.jpg 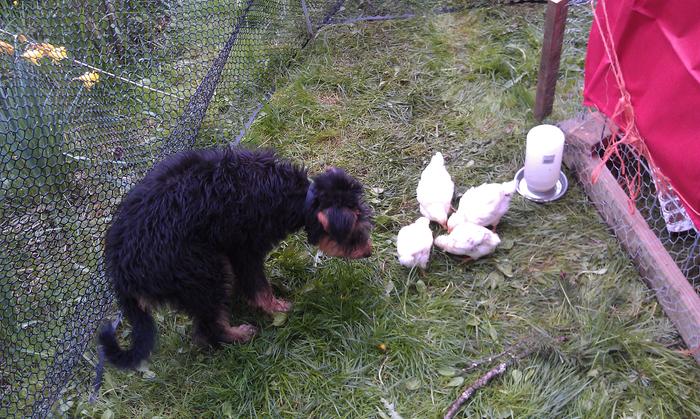 Posts: 31
posted 9 years ago
Joshua, very cool! where did you get him?

You mentioned LGD and is there a breed you are thinking of right now?

Joshua Smith
Posts: 31
Location: Brentwood, Tennessee, USA
7
posted 9 years ago
I got him from the original breeders in Port Angeles, WA. We are considering breeding this one and maybe just using the NW Farm Terriers as our LGD. We do not have high predator pressure so a Great Pyrenees is not required. Those are the two breeds I think about when I think LGD. This is mainly due to Podcast #25.
Nathan Pickard
Posts: 20
1
2
posted 7 years ago
I am interested in purchasing a pup here in Oklahoma. Have any made it out that far east?
Andy Cook
Posts: 44
Location: Alaska
1
posted 7 years ago
Hello All,

Nothing against the effort to do what these people are attempting to do. That being said, if you are looking for a dog with the stated traits you will have a far better chance to get a decent dog from an established breed from breeders who are serious about maintaining the traits. Maintaining traits is hard enough, much less starting a new "breed".

The traits in the dogs of this project are far from established. Coat, for one is notoriously difficult to stabilize in a breed that should have a rough coat. If the outer harsh layer of hair is missing then you have a dog that gets soaked to the skin in wet grass and far more prone to injury from brambles etc. ..

Additionally, a dog that is actually capable of being an effective deterrent against bears and cougars will not be suitable for people with little or no experience truly training dogs ie: regional or national competition, protection etc. . .

The cost to care for a good dog and a lousy dog are the same. Buy from a reputable breeder who has a track record of producing what you are looking for from an established breed. Very few people in the dog breeding business are willing to cull the inferior individuals. Even fewer people are willing to get rid of a dog they buy as a pup, lavish with care and affection only to have it turn out to be mediocre or useless when it comes to their intended role.

My WAG is that most people tempted to buy one of these have never been more than average pet owners, and are attracted to not much more than the "newness factor" of the project. If your expectations are nothing greater than a pet then you likely won't be disappointed. And finally, most people do not have the time or expertise to train a working dog. You have to love the process of creating the partnership between you and the dog, not find it one more chore that is easily put off. . . . which results in a pet which has been "trained" to be poorly behaved and a nuisance.

The Germans (who breed some of the best) have a saying: A good dog adapts to the family, not the family to the dog.

My apologies if my comments upset some people. However, the comments are founded on 40 years of experience not only training dogs to national status, but training people to train dogs in both the US and Canada.

posted 6 years ago
Andy im not sure you listened to the podcast. These dogs are not intended to be well trained "bear killing" attack dogs. They are not even that big of a breed. If I understood paul correctly these dogs are breed for family bonds or "pack nature." THey seem to have an innate bond with others which causes them to want to protect members of there pack rather it be the kids or the family chickens. They are supose to be live stock dogs that have a bond with the other animals. I dont know any of these traits to be true but that was Pauls perspective once again if i Understood it correctly.

My Signature for the last few years was "just spinning wheels," but after our PDC at Pauls Place this summer I feel like we are finally catching traction. Hope to be threading some more. got a roof on our house, swales dug, and finally starting to work on our plan in more details.