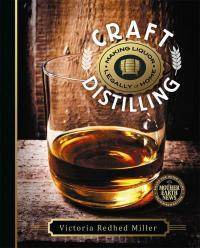 Many people have experienced great success making their own beer or wine at home. In recent years a number of hobbyists have become interested in making distilled spirits. However, distilled spirits are more complicated to produce, and the process presents unique safety issues. In addition, alcohol distillation without a license is illegal in most countries, including the United States and Canada.

From mashing and fermenting to building a small column still, Craft Distilling is a complete guide to creating high-quality whiskey, rum and more at home. Experienced brewer, distiller and self-reliance expert Victoria Redhed Miller shares a wealth of invaluable information including:


This unique resource will show you everything you need to know to get started crafting top-quality spirits on a small scale — and do it legally. Sure to appeal to hobbyists, homesteaders, self-sufficiency enthusiasts, and anyone who cares about fine food and drink, Craft Distilling is the ideal offering for independent spirits.

Can we talk about distilling?
distillation equipment for survival situations
Pocket Rocket For Water Distillation/Purification?

Jennifer Jennings
Posts: 103
Location: 39.720014, -74.875139 - Waterford Works, NJ
2
posted 4 years ago
For those into homemade hooch, I just reviewed Victoria Redhed Miller's latest book "Craft Distilling: Making Liquor Legally at Home". Vicky has been a forum guest at Permies in the past when she released her "Pure Poultry" book, and this latest DIY book is a new venue - making hooch! That said, you can read my review here - Examiner.com, or avoid the hassle of Examiner.com and read the review below (please note that hyperlinks to her book do put a few shekels in my wallet, if you choose to buy it - Examiner pays squat, pretty much).

I give this book 8 out of 10 acorns - primarily because I am not an expert in this field - but I am mechanically challenged, and still felt I could attempt distilling my own booze.


Making your own distilled spirits has been a largely ignored area in the DIY market, and not since Prohibition has there been serious interest in “homebrewed hooch” until now. With local microbreweries and wineries popping up everywhere, it was only a matter of time until people’s interest turned to the harder liquors, the fine spirits market, and a surge of enthusiasm for home distilling. Indulging that hobby, however, is not easy. It requires a still, fire, is illegal to do in some states, and is a gray area with very little good information…at least until Victoria Redhed Miller’s latest book, "Craft Distilling: Making Liquor Legally at Home" hit the bookstores.

So, how does one make a smooth dark rum, a single malt scotch, or a kickin’ tequila without poisoning yourself or blowing up your house in a still explosion? Miller, an avid do-it-yourselfer, went on the quest to answer those questions and documented the entire process, soup to nuts; all her hard work has made for an exceptional book that anyone can use to make the booze of their dreams.

Miller begins with a short history lesson on the “what” and “why” of liquor and liquor law (while making a most excellent case for Federal legalization of home distilling), but quickly progresses into the “how” of still construction and operation. She details every step of still assembly clearly so that even the least mechanically-inclined can duplicate her process. She also explains the liquor lingo of “heads”, “tails”, and other alcohol-related nomenclature as she moves through building, cleaning, testing, and using her distiller to make numerous spirits. Ingredients, mashing, fermentation, and aging are all covered thoroughly; Miller generously shares all of her experimentation, both successful and failed, and garnishes the lessons learned with a twist of humor.

As a bonus, Miller includes a chapter on boozy peripherals, such as the classic mixers of bitters, syrups, homemade tonic water (the real stuff without the high fructose corn syrup, mind you), and even maraschino cherries. The recipes included for these mixologist necessities are a pleasant bonus; even if you have no desire to build your own still, you might just want to make the best ginger syrup on the planet.

Miller’s chapter on the economics of liquor make for an interesting lesson that no farmer (or government) should ignore. Her concise, almost balance sheet-like analysis shows how anyone with extra fruit or grain could easily pad their wallet with a bit of networking and resourcefulness. Miller closes a farm-to-table loop that’s usually left open to waste by connecting the dots between the produce grower, the distiller, and the stockyard; information like that could easily keep more farmers in business and improve the overall economy of the United States.

Miller moves easily between the history, science, and implementation of creating homecrafted hard liquor, intertwining the three into an easy read on a difficult topic. If you’ve made your own wine but were intimidated by raising your game to include brandy or kirsch, fear not – this book was written with you in mind. All told, "Craft Distilling: Making Liquor Legally at Home" condenses a vast amount of hard liquor information into a great read that goes down like a Château de Montifaud cognac – smooth, easy, and leaving you wanting some more.

Got a project that needs some attention? A book to review? Some product to test out? Contact me and gimme something to write about! http://www.examiner.com/natural-health-14-in-atlantic-city/jennifer-jennings

posted 4 years ago
Thanks for the reminder...for everyone out there fuel distilling, your 5110.75 TTB report is due in 12 days.

posted 4 years ago
The author did mention that's it's a federal crime in the US, regardless of state laws, right?

I feel like leaving that out would be such an egregious error that a reviewer would be duty-bound to mention it.

Mike Cantrell wrote:The author did mention that's it's a federal crime in the US, regardless of state laws, right?
I feel like leaving that out would be such an egregious error that a reviewer would be duty-bound to mention it.
Source: http://www.ttb.gov/spirits/home-distilling.shtml


That, or perhaps the author described the steps you needed to distill spirits legally, like setting up a bonded facility, keeping tons of records, paying taxes, getting your label approved, keeping records (yes, in there twice for good measure), and selling to a licensed distributor.