Keystone XL- Why I Don't Care

posted 7 years ago
I don't care what decision is made on Keystone XL. As noted by the diagram below, the majority of necessary infrastructure is already in place to ship oil from Canada to Texas's oil refineries. The proposed Keystone XL project is just a short-cut because many years back when the original pipeline was being made, some states refused to let the pipeline go through them, and so the company was forced to take a roundabout path. 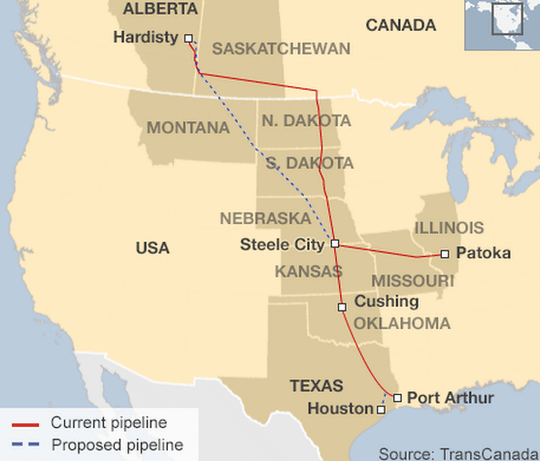 Yes, many trees would get hurt from the pipeline cutting through some national parks. However, as mentioned before, Keystone XL is just ONE, only ONE, infrastructure project. They're a big company. They can easily take the losses from sending oil the long way to Texas and Illinois. Keystone Xl doesn't mean much to them.

On the plus side of the bill the Republicans in the House and Senate have proposed, there is a declaration in the bill stating that climate change is real and not a hoax. that's pretty bold for conservatives. That's their word, and Obama might veto the bill.

Frankly, there are no good options for Obama to make on the bill. If he vetoes, Republicans will tell their constituents that he doesn't care about the economy or the American people's livelihoods. If he signs the bill, then his party will feel betrayed.

In the long term, this is where my views differ from others, I think, using game theory, the best strategy is to play to win. This means it is acceptable to lose small battles, if the game can be won. Republicans have offered to believe that climate change is real. If he signs the bill, then Republicans have made a legal statement that they can be held accountable for. Therefore, by accepting the bill, Republicans could be forced through public opinion and demand to pass environmental legislation. Also, if the bill is accepted, the US gets some positive light in Canada. Hmm...

From a different perspective, the chance to slow oil production has already pasted. It's here. The goal of companies to to make profit, profit, and more profit. Profit is not a bad word, I think. Profit is necessary for expansion and growth. Oil is being produced because oil is being demanded. If people really wish to change save the environment, then I think people will have to start putting their money where their mouth is. How are they getting from place to place? I think it is with oil... Demand always means supply will be created. Money is available for the taking, especailly when supply is given to a popular demand. That's economics.

If the supply of oil is increased as it is currently, oil companies can be put out of business by the dramatic decrease in profits. If the demand shifts to the left while supply is high, that would really create the incentive to push to greener technology. Tons of stockpile with nobody to sell it to. Uh-oh! Everybody's in trouble!

however, while prices are low as they are, people have no incentive to stop demanding. So supply will continue to increase until most companies go out of business, and only the best companies are left standing. Once the best survive, prices are free to be hiked back up. Once prices go up, the incentive to buy gas goes down- decreasing demand, causing a subsequent decrease in supply. If things are left to free fall, most of the oil in the world should in theory be used up in no time flat. If climate change continues on its course, things are going to get worse. When things go bad, change is necessary. When change is necessary to survive, it happens.

Just something to think about.... There are many ways to reach the same goal.... We, the people (i.e. everyone in the world), have the choice to decide how they want to reach a more sustainable and regenerative world... Where one puts their money makes an impact... Legislation could mean less at this point... Thoughts?

Posts: 1748
Location: Western Kentucky-Climate Unpredictable Zone 6b
111
posted 7 years ago
As a Libertarian , my beef is eminent domain being used to foster this project. If it is such a great thing let them use persuasion , not coercion. That's a lot of persuading to do.