Loxley Clovis wrote:"The chair’s sinuous curves look organic, but were all painstakingly specified with CAD software and 3-D printed as hollow skins using a corn-based bioplastic. Pellets made from straw filled the cavities and a starter solution of liquified spores was fed into the construct. Over a period of five days the eukaroytes fed off the nutrients in the straw and infiltrated the tiny gaps between the straw pellets and plastic skin, acting like an organic glue that bound the chair together and transformed a flimsy husk into a sturdy household item. Tiny perforations in the surface gave way and allowed mushrooms to sprout, creating an unplanned organic upholstery. ...
Klarenbeek imagines a future where everything from our homes to our furnishings could be manufactured locally and sustainably—using mushrooms. 'We can 3-D print both the house, insulating structure and its skin at once,' he says. 'By combining 3-D printing and mycelium, the applications are endless.'" - No Shiitake, This Chair Is Made of Mushrooms, by Joseph Flaherty, Wired.com, 9:30 AM, 12.03.13.

posted 2 years ago
That one looks like some kind of puffball to me.  I bet if you broke open the bulbous part of it, you'd find a powdery cloud of spores.  Before they mature the inside is sort of like marshmallow in texture, but as it gets mature, the spores loosen and are easily made airborne.  Probably best to mess with it outside. :)

posted 2 years ago
So my personal discovery of this fungus blew my mind nearly as much as listening to Joe Rogan interviewing Paul Stamets did:
"The Aztecs intentionally inoculated their corn with [Huitlacoche, (Ustilago maydis)] spores by scratching the base of corn stalk with a soil-smeared knife. The fungus can live up to three years in the soil. The intentional infection is usually manifests itself ten days to two weeks later." -Deane, Corn Smut, Mexican Truffles, EatTheWeeds.com
I love the re-branding effort to "Mexican Truffle"! Seriously, who's going to eat "corn smut"? LOLl! No wonder it's not widely known outside of indigenous Aztec circles.
Three sisters you say? Maybe it was actually four sisters!!!
EDIBLE-Mexican_Truffles-_huitlacoche_(Ustilago_maydis)-_Germany_by_Kai_Hirdes-_WikiMedia.org.jpg
EDIBLE-Mexican_Truffles-_huitlacoche_(Ustilago_maydis)-_merchant_woman_in_Guanajuato_by_Tomascastelazo-_WikiMedia.org.jpg
EDIBLE-Mexican_Truffles-_huitlacoche_(Ustilago_maydis)-_Taco_de_Huitlacoche-_by_Cuauhtemoc_F_Ramirez_A-_WikiMedia.org.jpg

You can see with only one eye open, but you'll probably run into things and stub your toe. The big picture matters.


Find a local mycology group (peer review!) that you can go on walks with & collectively identify local edible, medicinal, & poisonous fungi together.
If you're not 100% sure of the identification, do not consume... ever.

posted 2 years ago
"Mushroom ketchup is a style of ketchup (also spelled "catsup") that is prepared with mushrooms as its primary ingredient. Originally, ketchup in the United Kingdom was prepared with mushrooms as a primary ingredient, instead of tomato, the main ingredient in contemporary preparations of ketchup. Historical preparations involved packing whole mushrooms into containers with salt. It is used as a condiment and may be used as an ingredient in the preparation of other sauces and other condiments."
https://en.wikipedia.org/wiki/Mushroom_ketchup
EDIBLE-Mushroom_ketchup-_by_Peter_Carney-_WikiMedia.org.jpg


Dear researcher.
I'm from north Pakistan k2 mountain range.
I have rare and different kinds of mashrooms.
Will share you here.

Loxley Clovis wrote:
Folks should always be aware when eating anything -not just in the fungi kingdom- from the wild. For example, a novice forager might not know the identity & poisonous properties of hemlock (conium maculatum) or a blowfish (tetraodontidae).

This is very important! Last year I finally made my husband understand that the so-called "cow parsley" invading our old garden area was, in fact, poison hemlock. I had to pick leaves and stems from several related plants (all looking like, or actually, parsley) and point out the minute details of each--then show him a couple of youtube videos I found on the dangers of misidentifying hemlock before he would give in and admit he was wrong. It isn't that I wanted to be right, but that I did NOT want to be dead! Apparently, he had actually added a few small leaf-tips from the hemlock to a wild salad he picked one evening!!! (Without telling me.) I'm really not sure why we were not poisoned, but all I can figure is that the growth was brand new and at the very top of the plant--maybe the toxin was not strong enough there to affect us. I know that many toxic plants, like pokeweed, for example, can be eaten sparingly if you limit intake to the small, new leaves or leaf tips AND consume very small quantities. However, I do not plan to repeat that particular experiment, and now my husband won't either!


Dear Akhond,
Thank you for sharing your photos. For identification purposes, I highly recommend posting your excellent photos to the website MushroomObserver.org. You may post there along with other essential information for identification such as size measurements of the fruit body, spore print color, et cetera and you are likely to get identifications.

posted 2 years ago
I was recently fortunate enough to observe the growth of a Magpie Inkcap over four days. It was truly fascinating.


I invite you to read more about it here:
https://peaceandpollen.net/2019/01/19/the-magpie-inkcap/
Magpie-Inkcap.jpg
Mike Kenzie
pollinator
Posts: 362
Location: wanderer
146
I like...

posted 2 years ago
Excellent job with your photography of that Magpie Inkcap Nikolas! And thank you for sharing your blogpost.


I would like to learn about mushrooms. These are some on our property.

we are here to learn

posted 11 months ago
"Amanita muscaria, commonly known as the fly agaric or fly amanita, is a basidiomycete of the genus Amanita. It is also a muscimol mushroom. Native throughout the temperate and boreal regions of the Northern Hemisphere, Amanita muscaria has been unintentionally introduced to many countries in the Southern Hemisphere, generally as a symbiont with pine and birch plantations, and is now a true cosmopolitan species. It associates with various deciduous and coniferous trees.
Arguably the most iconic toadstool species, the fly agaric is a large white-gilled, white-spotted, usually red mushroom, and is one of the most recognizable and widely encountered in popular culture.
Despite its easily distinguishable features, Amanita muscaria is a fungus with several known variations, or subspecies. These subspecies are slightly different, some have yellow or white caps, but they are all usually called fly agarics, and they are most of the time recognizable by their notable white spots. Recent DNA fungi research, however, has shown that some of these variations are not muscarias at all, such as peach-colored fly agaric for example, but the common name 'fly agaric' clings on." - https://en.wikipedia.org/wiki/Amanita_muscaria.
Found these images that are licensed in the public domain:

posted 6 months ago
Mushrooms everywhere now. On a bicycle trip in search for nuts I saw some beautiful mushrooms too. I think they are called 'parasolzwam' in Dutch (Macrolepiota procera in Latin). 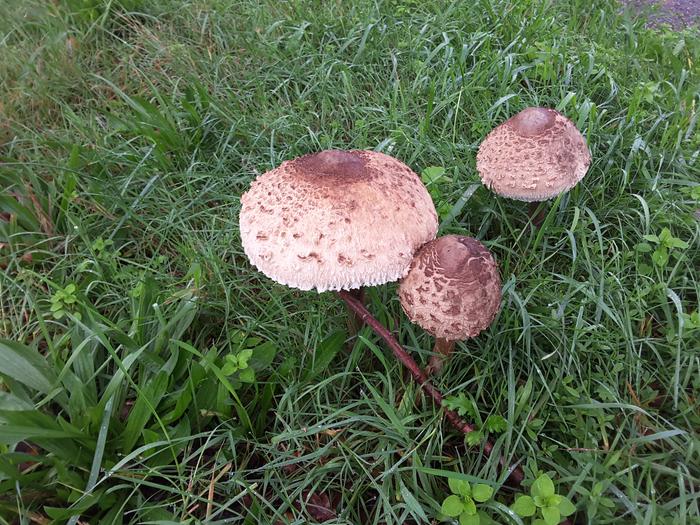 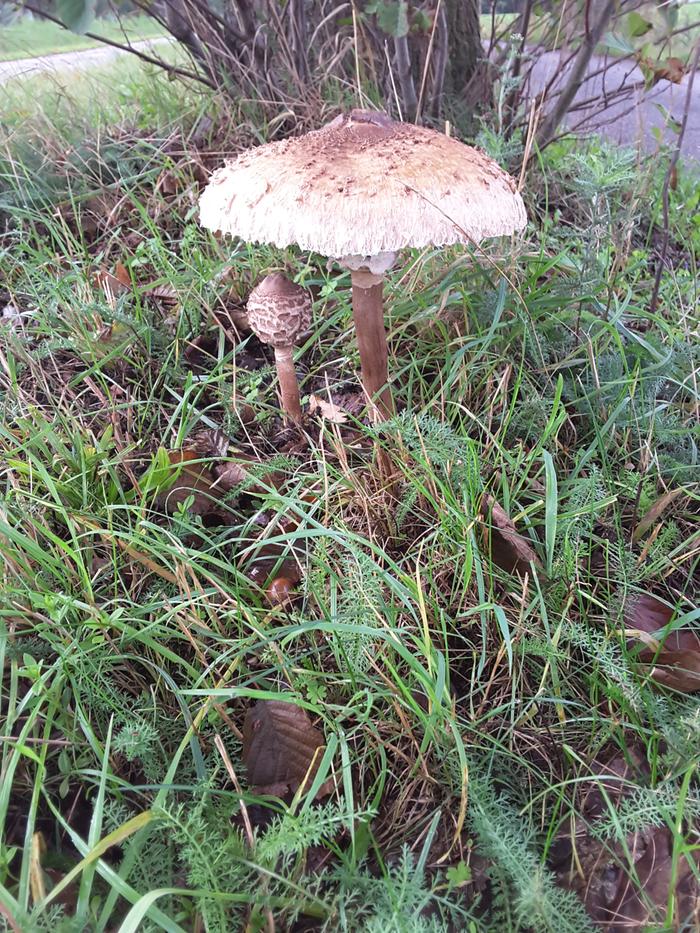