some progress being made between pond and woods

Brenda Groth
pollinator
Posts: 4437
Location: North Central Michigan
26
posted 10 years ago
Well some of you might remember last year we enlarged and deepened part of our pond and we had piles and piles of clay, sand, muck, cattail roots, topsoil, etc piled about 6 to 8' deep and higher North of the pond addition and south of the woods. 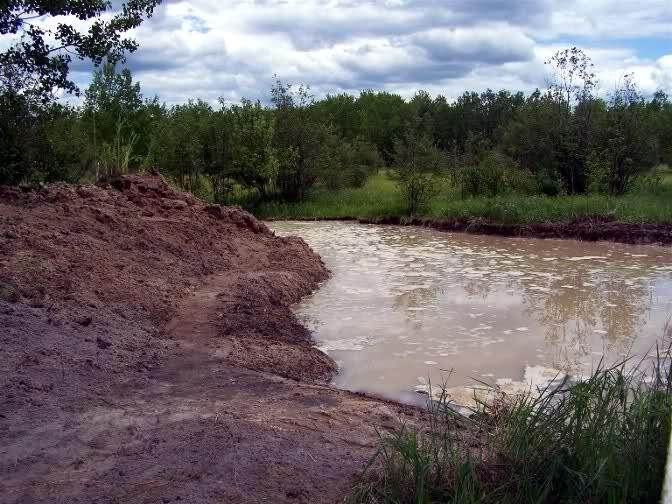 this is a picture right after it was dug and i raked a path along the side a little to be able to see the fish and put in the water lilies.

Well yesterday Joel decided to come over and see how much he could "flatten" it out..i had raked some paths so it was easier for him to get the tractor up on top..and this is a little photo montage of what he got done yesterday.. 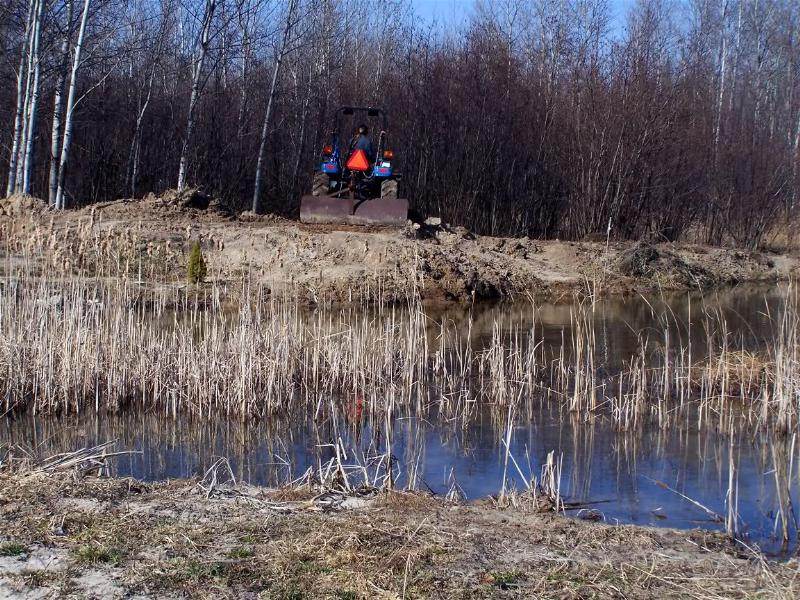 as he was getting started, pushing the soil off to the west toward the field and to the north towards the woods. 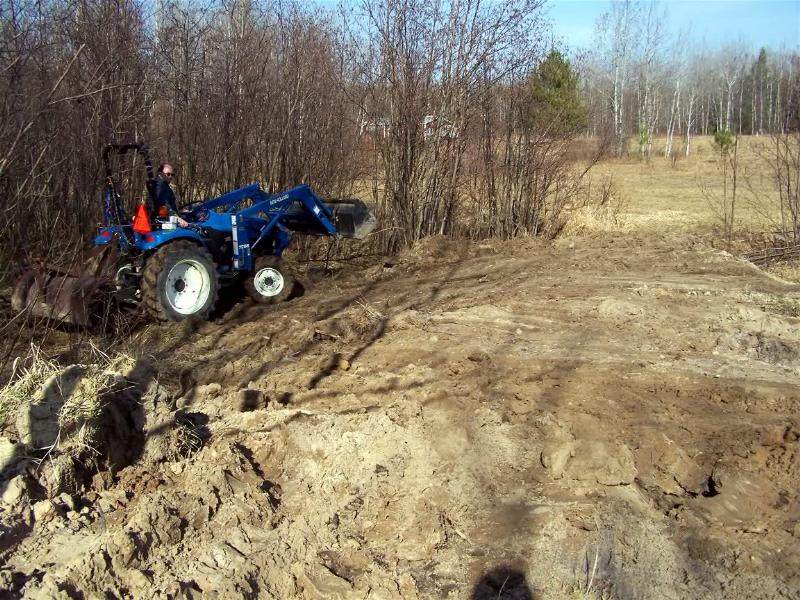 also the pond was seeping through on the north where there was soft swampy land, so he pushed some of the clay soil over the seepage area and made a sort of dam to stop the seepage, which gives it another foot to foot and a half that the water level can come up to..which makes me happy as the new dig had dropped my pond level by that far..so thenow shallower areas will fill back up..the pond is 8 years old but the North half new dig is just since last summer. 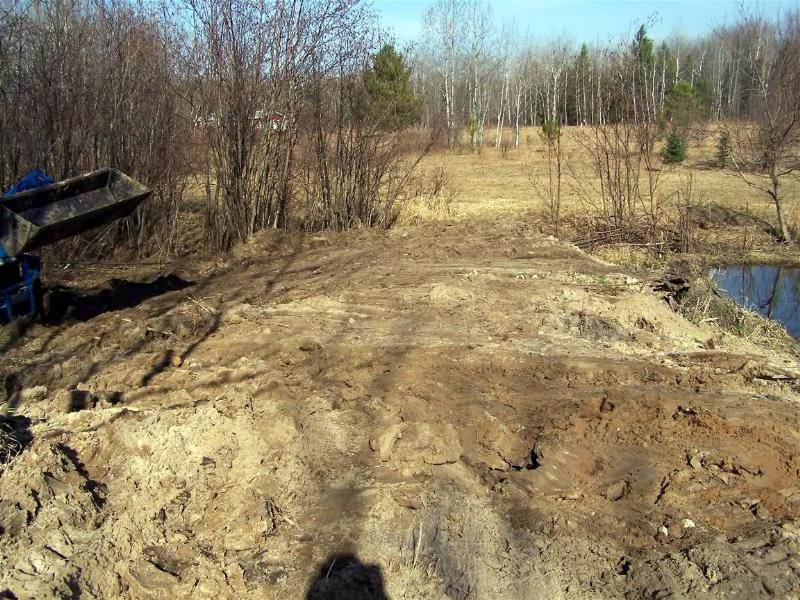 he only got it about half done, but a lot better than the previous piles..eventually we will work out toward the woods into more forest gardening..what was a swamp now will be more usable soil..he pushed over a bunch of the dying alder and wild cherry and buried it under the dirt..which is good soil..a few aspen trees are damaged from the work and will have to come out but there are a lot of healthy ones as well as the wild cherry and alder, ash, maple, and i have planted black walknut, butter nut, carpathian walnut and 2 hardy pecans ..i have a lot of fruit trees coming, may put a few of them in this area if it is finished enough to plant when they come..ifnot..i'll just order more..i did plant a willow and a few small evergreens and some ground cover and flowers along the pond edge, but most of them aren't seen in the photos

Brenda Groth
pollinator
Posts: 4437
Location: North Central Michigan
26
posted 10 years ago
in that last photo you can see the one seedling apple tree ..far to the right by where he built the dam..that had the early really sweet russety apples. ...still have to clean the alders out from around it.

will be nicer to access it when this dam is finished too. 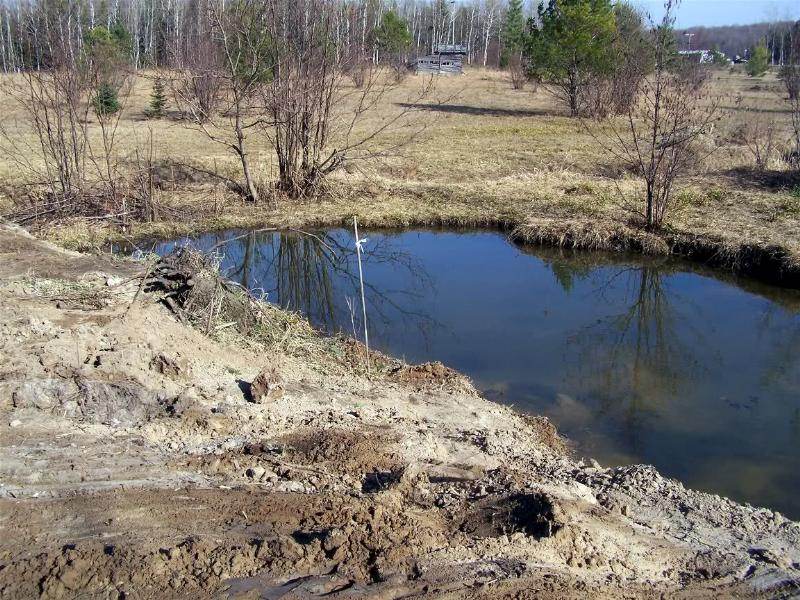 i'm standing up on the partially flattened bank here looking west toward the field..that is the top part of the figure 8 shaped pond on the upper right hand side of the 8..a new area.. 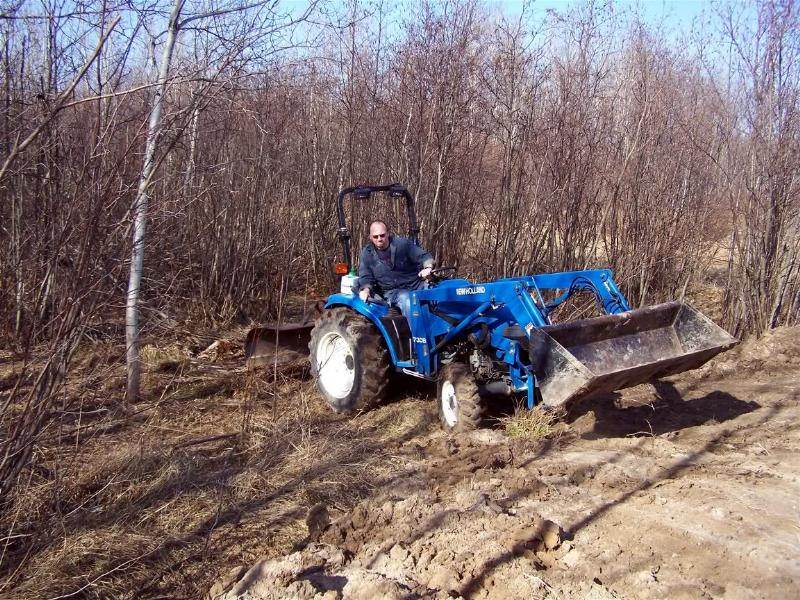 I'm really looking foward to the tractor work to be done so i can get busy planting..i'm not a patient person but with Joel working 60 hours plus a week, he has so little time to help me.

posted 10 years ago
This looks great Brenda, you can see all the way down into your pond.

Now all you need is some big rocks to put around and you'll be Sepp-ing in style.

Brenda Groth
pollinator
Posts: 4437
Location: North Central Michigan
26
posted 10 years ago
part of the shallower water is edged in rocks, we don't have a lot of rocks in our land so when we find some we save them..they are in my  gardens and along the water..i put a lot of flat ones along the shallows for places for the water critters to rest ..like turtles and frogs..to sun themselves..in the gardens they hold heat and add some structure.

when i went back out there this afternoon, the soil that had been graded was hard as a rock..it is nearly all solid clay but had broken down some over winter..but the broken down part Joel moved with the tractor..and now has laid bare more wettish clay..and it overnight hardened right up..so it will have to break down more yet before we can work with it again.

wish he had gotten more done..but working 60 hours a week i was lucky he got done what he did..may be another year before he finishes it and honestly i sure hate to leave it bare..but if that is what it needs to "break down" ..then i guess i'll have to..it will all get all torn up again next time he works on it..but i'd sure love to cover it with something !!