OK, what did I do wrong?

Scott Saxon
Posts: 10
3
posted 7 years ago
OK, so I have built my greenhouse system. Took a bit more than two days. Where did I read that? Oh well.

Anyway........... I guess I should have built an 8" version. There is a lot more info on that, but it's for a small greenhouse, and I had all this 6" pipe so went that route. Results are less than exciting.

Can anyone tell me how hot the barrel should get? I'm getting only about 540 degrees right at the top center and less than 400 on the side near the top. When I put in really dry cedar, I get thick black smoke out at the end. Almost smells like chemical or something. Kinda weird. Seems like I'm not getting the secondary burn explained in the videos. The inside of the barrel and outside of the riser insulation is covered in black soot. Inside the riser, I have a clean burn. I do get a sideways burn in the burn tube... most of the time, but it seems like it should be "roaring" if I understand what I have read and seen from the DVDs and the book. My riser comes within 2.5" of the barrel at the top. Barrel is a 30 gallon barrel. 18" Diameter. About 3" clearance between the barrel and riser insulation. I also tried putting a 55 gallon barrel on, but did not adjust for the riser/barrel clearance. Made no difference.

I also get fire coming up the feed tube when I use good dry wood. The cedar burns quickly and leaves a bunch of coals, which then tend to block the burn tunnel too. I must clean the burn tunnel after each firing of the stove. I tried to follow as exactly as possible, the recommended dimensions, increasing only the height of the riser since I read that it was good to do so. Higher riser, better draw. This resulted in raising the cob at the bottom of the barrel so I have about 9.5 inches of channel that feeds into the exit. Any of that make sense? Perhaps this is it. The actual dimension of this extra 9.5 inches is slightly smaller than the barrel, but the one side is a huge hole leading to the exit. I can ream it out. Sculpting dried cob is pretty easy with a crowbar, actually.

With about 28 feet or so of 6" stovepipe buried in cob, I thought I might have too much back pressure or drag, but removing the cleanout at the bottom of the barrel exit does not result in better breathing.

The base of the stove seems to retain heat nicely, but the mass is a real disappointment. Hasn't actually been warm yet.

Anyone care to give any advice?

Posts: 3384
Location: Southern alps, on the French side of the french /italian border 5000ft elevation
171
posted 7 years ago
Do you have a vertical chimney at the end?

Well, anyway, for troubleshooting only on a description, it's nearly impossible. Please post pics.

posted 7 years ago
Hi Scott; How long has your cob been drying ? Until it is dry it will not heat up properly. I built mine in the summer in the green house ,( you know Hot) The cob and rock mass went on in layers , with enough dry time between that it looked dry... when I went to fire it off , I found out that looking dry and being dry are not the same ! It took at least two weeks of burning before I started seeing temps at the far end of the mass. initial temps on barrel top were 800 , after drying for a month or so I was getting 1100 on the barrel top (glowing orange) and 950 on the side. yes it is an 8" system and it does have tall vertical chimney at the end. Send photos and more info and hopefully somebody can help you.

Scott Saxon
Posts: 10
3
posted 7 years ago
There is no vertical chimney at the end. Hardly seems necessary with only slightly warm air exiting there.

However, I have new information. I enlarged the area below the barrel and raised the barrel slightly. Propped it up on a couple blocks. Whoosh, good rocket action. So was it the raising of the barrel, giving a larger barrel to riser gap, or the widening of the channel below the barrel, or the opening of the gap between the barrel and the cob? To find out, I closed the gap mostly... with just more wooden blocks. This reduces the flame velocity, so I feel comfortable in thinking the problem is after the J-tube and the barrel. I will try opening the ash cleanout again tomorrow and see if I can enlarge the pathway in that area more as well.

I'll let you know what I come up with.
Scott Saxon
Posts: 10
3
posted 7 years ago
I built mine in the cold winter weather and it has been drying for a few weeks. I would say it is probably near dry. Good to hear the target temps.

Also, my mass is only cob. No rocks or urbanite so it will likely take longer to dry.
Satamax Antone
gardener

Posts: 3384
Location: Southern alps, on the French side of the french /italian border 5000ft elevation
171
posted 7 years ago
Scott, trust me, you need a chimney!

posted 7 years ago
Scott; I second max , you really need to ad a vertical rise , it will create a draw . Also, if your mass is all cob , built during winter with no rock or urbanite it will take a really long time to dry out and heat up. Sounds like a lot of work mixing cob ! Rock would have filled the voids requiring less cob making and no dry time plus they hold heat better. But it will dry and it will heat up it is just going to take time ! Add a vertical stack even though you don't think it should be necessary. You can always take it down later if you really don't need it (most all do need one) . Because of the low exit temps your pipe can be run as close as need be to things normal stove wood stove pipe could not be near. Your horizontal transition area MUST be large enough !!!
R-87.JPG 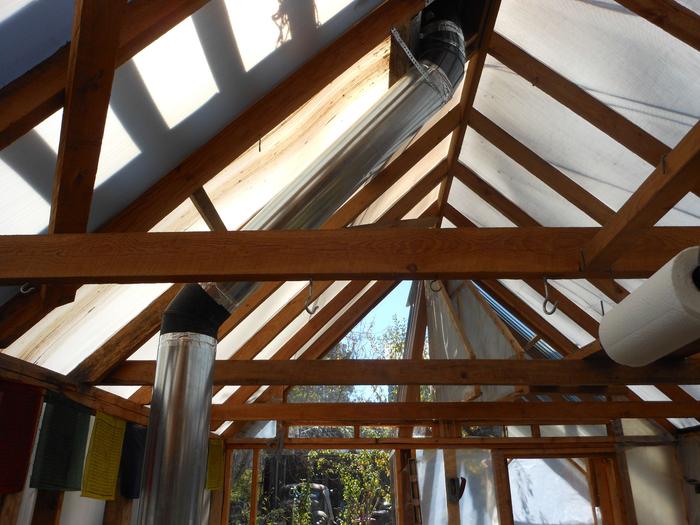 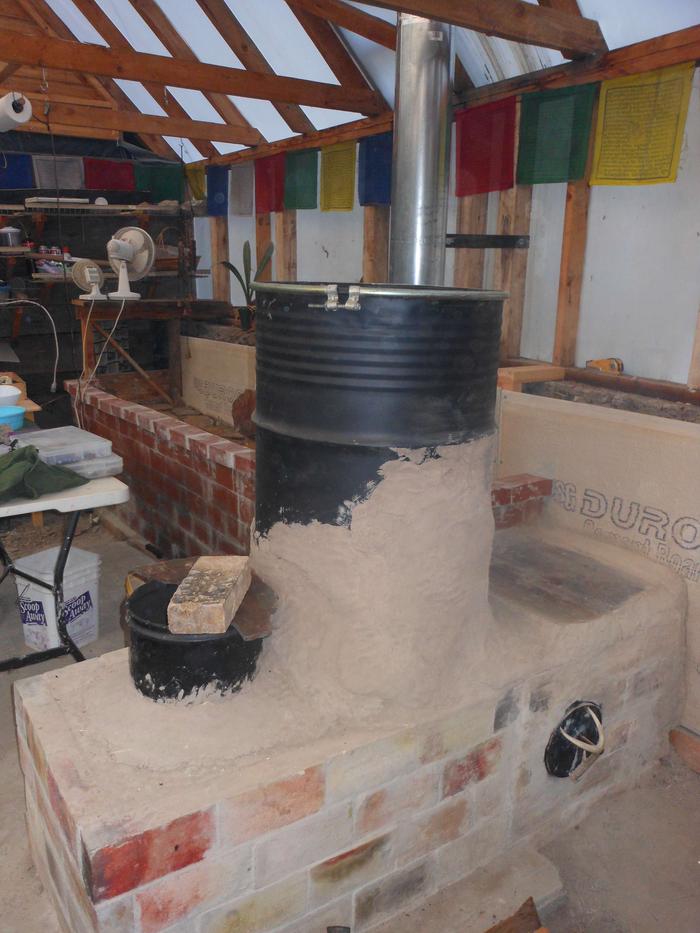 Scott Saxon
Posts: 10
3
posted 7 years ago
I guess I should update this. I did find some significant restriction in the pathway just before it entered the mass. I guess that is what you are calling the horizontal transition area. Opening that up made the biggest difference. It's still not as good as most I have seen online, but it might work now that it is dry. Winter will tell us when it comes.

I tried the vertical stack both before and after doing this and it made no difference whatsoever that I could tell. I believe this is because the air coming out of the mass isn't hardly even warm.

Looking forward to playing with it again as the temps drop later in the year.

posted 7 years ago
Scott Saxon ; Yes you are going to need to find a way to send us some pictures, I will make one more person to tell you -

when the barrel goes on -the vertical chimney must go up ! 4' - 5' above the nearest other object !

make sure all clean outs are tight ! Big AL !

allen lumley wrote:
when the barrel goes on -the vertical chimney must go up ! 4' - 5' above the nearest other object !

Hey Al, does it have to be a vertical chimney? mOST OF THE CHIMNEYS i#VE SEEN ARE VERTICAL; i#M JUST WONDERING HOW A HORIZONTAL one would work. (sorry caps got stuck)
allen lumley
pollinator
Posts: 4154
Location: Northern New York Zone4-5 the OUTER 'RONDACs percip 36''
62
I like...

posted 7 years ago
A. G. : Da!!! Please test the core w/ a Vertical Smoke Stack, it pre-tests our Rocket before the Mass ! Later "U" will could attempt a test of a different exit pipe !
Best Wises! Big AL