Michael Dotson
pioneer
Posts: 284
59
posted 1 year ago
Good afternoon, fellow growies! There is a pear tree in my yard that my wife got from the Arbor Day people. She doesn't even remember what variety, but it's thriving and the pears are really good. I'm attempting to clone the pears (and plums) in a clear bin inverted (see pic). I have their feet in a mixture of potting soil, composted manure, worm casings and other secret ingredients. I have holes drilled in the cups with a little bit of gravel for drainage. When I took the scions I scratched the bark a little, per advice from a successful cloner, to allow roots to start quicker. She admitted she wasn't sure that works but it hasn't failed. I thoroughly wetted the scratched bark and dipped them in rooting hormone before setting them in the soil mixture compressed firmly around them.
Another successful cloner suggested wrapping the scions in plastic wrap to keep the moisture inside. Wrapping it up is easy. Getting it off is a pain in the six. When I saw little bits of green starting to pop out on them I realized I didn't like that bit of advice. I stripped the plastic wrap off them and thought about this bin at the back of the shop. Inverted it would make a fair little greenhouse. So, I sat it up on an old boat that's destined to become an herb garden. I put the scions on the inside of the lid and doused them good with well water until it was coming out the drain hole. I left the excess water in the lid and put the cover on. Anyone else done this? Will it work?
Fruit-sprouting.jpg 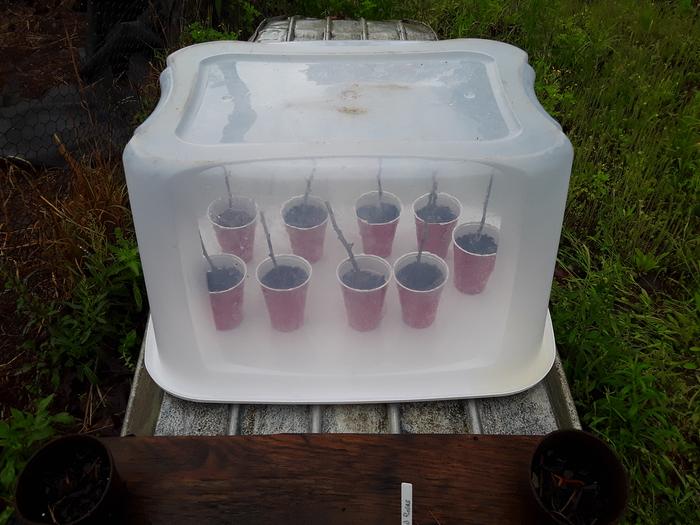 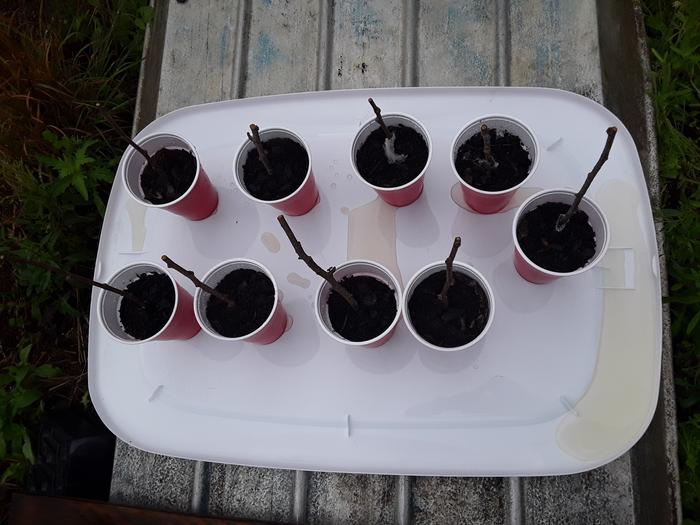 posted 1 year ago
I have done similar with an inverted aquarium.  I never tried a pear.  I would be sure to keep it in full shade.  If sun hits it, it will turn into an oven very quickly.

Trace Oswald wrote:I have done similar with an inverted aquarium.  I never tried a pear.  I would be sure to keep it in full shade.  If sun hits it, it will turn into an oven very quickly.