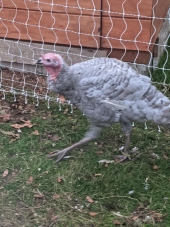 Wry/crook neck or something else?
Any one with an idea?  He still seems to be about the same.  Maybe slightly less severe with the neck issue, whatever it really is.

He will be one of the culls for Thanksgiving.  I'm pretty sure I have 7 toms and 9 hens.  Got 2 hens pre-sold.  May send one hen to my parents since they won't travel due to Covid, and their 50th anniversary will be the Saturday after Thanksgiving.  That would leave me with 6 hens, so I need to cull it down to 1 tom reasonably quickly.
show more
4 days ago
turkeys

Dexter Bull Dilemma
If Leora hadn't beaten me to the punch I'd have suggested bringing your cow to the bull if renting him isn't feasible.

Other option is to rent a non-dexter bull this year and just plan to slaughter that calf once it reaches a size you like (even if much younger than you'd normally slaughter).  Meantime either get the bull you have tested for fertility, or just see if by next year he is mature enough to do the job.  If he never gets interested, or tests sterile, slaughter him and start shopping for another suitable bull.
show more
1 week ago
cattle

Wry/crook neck or something else?
Opinions?  See photos.  Turkey is a blue slate heritage, a little over 4 months old.  He's eating, moving around, etc just like the others.
show more
1 week ago
turkeys

Lauren Magnolia wrote:This thread is similar enough to my question, so here goes!

We have 25 chickens and need to find a feeder that satisfies them all. We've got the standard metal one (big lidless cylinder with the bottom trough for them to eat out of) but if I fill it all the way they get in the top and poop, or the rain comes in sideways and it's trashed.
So I'm filling it with a couple coffee cans a day... Thumbs down!

I'd love to utilize the PVC feeders, or a bucket w/ lid and the PVC fittings at the bottom, but how are all these beaks gonna get fed with only half a dozen openings?
Two buckets? Never let it run dry so they don't all attack it in the morning?

Open to suggestions! Thanks in advance, you beautiful Permies!

I've got 36 or so hens (hard to get an accurate count).  The garbage bin with 5-6 PVC fittings around the bottom is plenty for them.  Between what they scatter, and the fact that they just get used to taking turns, it is plenty of access to the feed.
show more
3 weeks ago
chickens
Cooking Right After Butchering
If you can cook them before rigor mortis sets in you should be OK.  Once rigor starts though you'd be best off waiting until that relaxes to cook them.

I've had rigor set in before I could get them out of the cone and to the scalder (under 5 minutes) and I've chickens still not be stiff an hour later.

If you want to cook a couple that day I'd hand them off to the chef the instant you're done gutting.  And I'd pick a couple that went especially fast from cutting the neck to plucked and gutted.

Note: I say this as someone who's never tried to cook a chicken the same day.  Usually chicken is not something I want to eat after a long day of processing them, so the day or two of rest in the fridge is just what I always do.
show more
3 weeks ago
chickens

Bears- problem is the solution???
It sounds like the bears overpopulated the area and stressed the carrying capacity.  In times of unusually good fruit production that is one thing, but get a poor year and then famine results.  If the neighbors hadn't shot some of the bears most likely many more would have died of starvation over the winter.

That electric fence is going to do a lot to keep the bears out of your property, at least the areas you want them excluded from.   Obviously you can just fence a portion of the land, and leave some for the bears to use too.
show more
3 weeks ago
predators

Bears- problem is the solution???
Communities that keep garbage inaccessible to bears, and maintain good fencing tend to have few problems.  Some degree of hunting bears also helps a lot.

I'm sure there are bears not too far from where I live.  But between them being hunted, and relatively little in the way of easy access to normally preferred foods, they just don't come around.  I have chickens, and unlocked garbage bins, and until very recently no dog or fencing.  And never seen a bear in the neighborhood in 10 years.  Coyotes, bobcats, and smaller predators like racoons are commonplace though.

I'll readily grant that the OP lives in an area with a much higher density of bears.  If we had that kind of bear population we would likely have put up fencing much sooner, and would keep garbage bins locked up until the morning the truck came to collect.
show more
3 weeks ago
predators

Bears- problem is the solution???
Unless we're talking about the Moon or Mars there is nowhere that any living creature can go that didn't have something else living there before.  Humans displaced kangaroos and crocodiles from plenty of parts of Australia too

The question here isn't so much whether humans should live in bear country, but rather how to manage the relationship.  After all, saying people can't live in [insert creature of choice here] territory because said creature was there first would mean there's essentially nowhere for humans to live.  That management of the relationship can range on the extremes from extirpation to complete non-interference with the bears and whatever they want to do.  Or somewhere in between, which is the most likely.

Predators learn manners when hunted themselves.  That goes for humans as much as for bears, cougars, etc.  Whatever is hunting a given predator generally results in a desire to avoid the territory of said hunter, and fosters a tendency to evade that hunter when encountered.  So some level hunting of the bears where the OP lives can serve to minimize the likelihood of negative interactions for most of the people there.

But there is also a lot that people can do to keep things peaceful with the bears.  Not feeding them (whether intentionally by piling up windfalls, or accidentally by leaving garbage out) goes a long way.  Good fences make good neighbors, whether those neighbors are other humans or bears.  Might require a pretty stout charger for hot wires to keep the bears out, but it is an effective way to keep them off your land.
show more
3 weeks ago
predators

Dexter Cattle discussion
A yearling acquired in spring and slaughtered in the fall will be 16-20 months old.  They'll be big, but not as big as the typical 24-28 month slaughter age.  A smaller and/or slower growing breed will reduce the size too.  That might get it down to a size you could home slaughter/butcher.  DIY is a ton of extra work, but it also saves a LOT of money.

As far as the half acre goes, you'll definitely be purchasing feed.  That steer will eat your lawn to mud in a few weeks.  If you want the best life for him on that small of a property you'd need to set up an area as a sacrifice paddock.  So 6-8" of compacted sand graded to drain well.  Keep him in there when the grass is too short for grazing and feed him hay.  You'll need a plan for dealing with the manure.  Otherwise you'll have a huge mess.  When the grass is tall enough let him out to graze.  He'd get probably a few days grazing then a couple/three weeks in the sacrifice paddock.
show more
3 weeks ago
cattle
How to process 12 birds?
For the blood, I've never done it, but I'm told that diluting the blood 10:1 with water lets you add directly to the garden.  Add water to the bucket before you start to help prevent coagulation.  Just keep track of how much water you add at the start, and then how much volume the blood adds you can get that dilution ratio right at the end.  12 chickens isn't a huge amount of blood.  But at 10:1 you might need a couple 5 gallon buckets to get enough water mixed in.

Anything else that is likely to get blood on it, if you put on some vegetable (or canola, or whatever) oil (sprayed or wiped on) before you get started it will make clean up MUCH easier.
show more
3 weeks ago
butchery