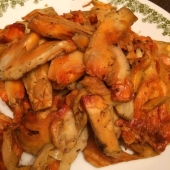 Simulating meat
I've never had mock duck and I haven't been able to eat seitan for years, so this might not be at all helpful.  I was wondering if using a stand mixer or a bread machine would get closer to the texture you're looking for, so I did some googling and fell down a rabbit hole.  I found this video and it looks promising:


I think adding the oil to the dough is probably important for texture, too.

Forest garden plants that deer won't eat
The only thing deer left alone this year was red shiso, which self-seeded from one plant last year into a dense 3'x3' patch this year.  I'm thinking I might try using it around some more vulnerable plants and seedlings next year, especially the fruit seedlings that keep getting eaten down to twigs.  Even mints aren't a reliable deterrent; the only one they left alone was peppermint (while eating and otherwise destroying spearmint, chocolate, ginger, and mountain mints).
show more
2 months ago
forest garden

Beware of this supplier
Be careful of some of the sellers on Amazon, too.  I was just looking for lids and some of them are charging over $12/ box (of 12 lids, no bands or anything!).  Right now I'm really glad I have three boxes of Tattlers.  If you're looking for jars, Fillmore Container has plenty; you'll save on the actual jars, but the shipping kills.  They're a good company, though.
show more
4 months ago
food preservation

Composting in Black Bear Country
I think coffee grounds work pretty well, too.  In 30+ years, bears have never gone near our compost (though they've destroyed bird feeders and eaten rabbits, chickens, and ducks).  My mother drinks two pots of coffee a day and the scraps are always layered with the grounds.
show more
7 months ago
composting
Scent free, cotton mask washing soap ideas?
According to Consumer Reports, vinegar alone won't destroy coronaviruses, since it doesn't rip apart the outer coating like soap or alcohol does.  Hydrogen peroxide will, so that might be your best bet.  Or, as others have said, a vinegar rinse after washing with soap.  Here's Consumer reports' article on what will and won't destroy the virus: https://www.consumerreports.org/cleaning/common-household-products-that-can-destroy-novel-coronavirus/
show more
7 months ago
home care
Scotch broom (Cytisus scoparius) toxic tar?
I read somewhere that you can use scotch broom as a substrate for oyster mushrooms.  Maybe that could be an intermediate step to composting?
show more
8 months ago
composting

How do I silkscreen 350 cotton bags?
Speedball used to sell kits for like $40 USD, but a cursory search only turned up deluxe kits for like $100 USD.  Kind of a bummer that they don't have lower price points anymore.  I personally haven't done any printing in almost 10 years, but in the past I've done t-shirts, patches, and onesies (one- and two-color only, and nothing requiring precision).  It's one of those things I loved doing and wonder why I stopped.  It really is super easy, although the actual printing part is a two-person job (though you can make or buy set-ups where the screen is on a hinge and clips down to hold it in place).

You can buy extra screen material and reuse the same frame, so you could make multiple designs while the chemicals are still fresh and just put the screens back in the frame as needed.  It's not easy to get them tight after you've taken them out and put them back in, but it can be done (it's just like fixing a screen door; a splining tool helps).  You can make your own frames, too, and just staple the fabric to them like you would a painting canvas.  I think there's a way to remove the emulsion after it's been set so you can reuse the screens, but I don't remember the process.
show more
8 months ago
art

Either last night or this morning, they ate one of my figs down to the ground.  Granted, it was only 8" high and probably only had 6 leaves, but yeah.  Our deer will eat anything.
show more
8 months ago
forest garden
Has Anyone Made Mei Gan Cai (Dried Fermented Mustard Greens)?
An update:  I decided today was the day to dry the greens, but I'm not sure if it's too early (started them June 6th).  The mold was just getting out of hand--it formed a full layer almost like a scoby every two or three days.  It also didn't smell right (kind of smoky, almost, but not bad), but once I scooped the mold layer off, the brine underneath smelled fresh.  I'd added more brine about a week ago, so there was about an inch covering the greens.  Even so, I discarded the topmost layer of greens and rinsed the rest thoroughly to make sure there was no mold stuck to them.  I don't know what they're supposed to taste like, but they didn't taste bad (a little bitter) so I assumed they were fine and put them in the dehydrator.  Oh, and the mold was white and powdery where it was dry and a little like a slime where it met the brine (I've heard white molds aren't usually the bad ones, but throw out anything with black or pink; I'm still a fermentation novice).

Next time I try these, I'm not going to add any brine or fool around with smooshing them down every day to try to get them covered in their own juice; that's how I got the mold in the first place.  I did a very small jar of mustard greens and just let them sit and do their thing and they turned out better--less bitter and more sour.
show more
8 months ago
fermentation

Going poo-less: No Shampoo/Soap in the Shower
I tried for about 6 weeks a few years ago and my hair stank like it was rotting.  I couldn't even stand the smell of myself.  I tried all kinds of stuff to get it clean, hoping the stink would go away--baking soda, ACV, coconut oil...  It was just terrible, so I gave up.  The static was insane, too, and I don't ever have static.

I decided to try it again in early April and it's not nearly as bad this time.  It still smells a little like greasy hair when it's wet, but it's not the kind of thing that would gag anyone that had to ride in a car with me (at least, I don't think it's that bad).  One thing--it gets really waxy.  Not oily like I was used to when I'd a go a week between washings, but more like a dog's hair.  And if I finger-comb it enough, my hand gets covered in that white residue like one gets after petting dogs.  I did use lather from french milled soap (South of France brand, I think) once about two weeks ago, and it really took that waxiness away.

About a week ago I finally got a boar bristle brush (Goody brand, bought online from a dry goods store in Lancaster County PA) and it's about as useful as teats on a bull.  Doesn't penetrate the hair except right near my hairline, where the hair is finest (the hair on the top of my head is finer and lighter than from my ears down to my neck and when I was a kid it was blonde on top and red on the bottom and people thought I had a bad dye job).  Makes my hair super staticky, too.  I prefer my regular old plastic brush, which just glides right through.  I have buttcrack-length hair, and the tangles used to be so much worse.

I usually have my hair in a bun 24-7, but lately I've been trying to keep it down in a braid more; I think that helps my scalp air out a bit and the hair gets to move, so it probably helps distribute the oils.  The scalp under the spot where my bun sits really hurt/ felt irritated for like two days and leaving it down took that right away.

I'll be honest: I have to go to the dentist soon for a long-overdue root canal (thanks, covid-19) and I'm kind of afraid that she's going to smell my hair and think I'm dirty or that the stink will give her a headache.  Maybe I'll just wear a scarf and explain why.  I don't want to wash my hair with shampoo and reset the clock.
show more
8 months ago
personal care