posted 3 years ago
There is a small village near Portland, Oregon which has been inhabited by the same family since 1970. It has grown steadily in occupants and area since then. The third generation of that family is now making a dent. Or maybe a crater. Here is an aerial photo of the part that I live on, as of last Summer. 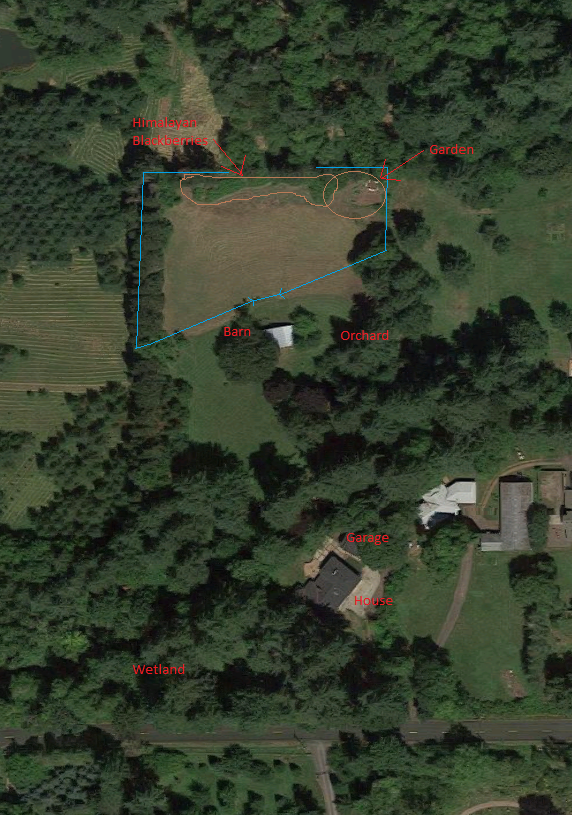 Five acres of prime bottomland. House on the South side of the creek. Barn, field and garden on the North side. We completed a deer fence around the garden this winter, and now I have onions, garlic, strawberries, green beans, peas, potatoes, spinach, broccoli and cabbage. Lettuce we planted this year was eaten, and the broccoli was ravished by worms. But the deer are mostly staying away. They nibbled on the green beans once, but the fence is making a big difference.

I'll post some more photos of the garden and wattle fence later. Weaving the wattle fence was a lot of fun, and it went up relatively quickly. Back in January my wife and I pruned some 1 1/2 inch suckers from our apple tree. Those formed the stakes for our first section of wattle fence. Then we wove the smaller straight branches between them. Once those were used up, I cut a bunch of shoots from a coppiced Ash stump. It took us about three Saturday afternoons to fence thirty feet on the East side of the garden. And those afternoons were short and easy. We also put up about 60 feet of field fence along the South side of the garden because my grandparents had left a roll of fence from their old garden. With the himalayan blackberries to the North and West of the garden, this completed our first defenses.

There are many more projects that are in process or are planned. It has been great fun to put different things that I learned here into practice.

posted 3 years ago
Here are pictures from a visit to the garden last Thursday evening.

This view is North across the old ditch towards the garden. The line of Lodgepole Pine grows along the Northern boundary. Groundwater is gathered in a ditch at the base of the trees and grows lots of algae. The ditch turns south along the East edge of the garden and then flows slowly across the field. It is like a pre-made chinampa system!

This area, West of the garden, doesn't look like much. But during the winter water seeps over the surface (from midframe to the left), which keeps the ground from freezing and extends the growing season of the grass. English sheepfarmers used this effect in their water-meadows.

Nice little barn and corral. There is a culvert in midframe to let the ditch continue flowing to the SW. My brothers are bringing power and water back to the barn. At some point in the future we will have some chickens, and my Dad might run paddocked cattle or pigs on the field.

The snow peas that we planted at the end of February are starting to climb the field fence. We planted them here in hopes that the deer would browse around the outside of the garden and not come in.

The plastic mulch is temporary. The garter snakes love it. There is a 3' long one that likes to hang out near the entrance to the garden. And a whole bunch of it's babies live in the different mulches. I am a fan and will continue to build habitat for them. My wife gets the creeps, but is brave about it.

Garlic patch, due to harvested in June or maybe July. The potato patch is in the foreground, compost pile behind the garlic. And then the wattle fence. Do you see the apple stakes blooming?

posted 3 years ago
Many things are going well in the garden. We added 2" chicken wire on the West and North sides to keep out the rabbits. I built a gate. So we aren't finding any prints from deer or much evidence of rabbits in the garden. But this cabbage plant was torn to pieces. Does anyone have any idea what might have done that? At this point I am thinking it could be a bird or a raccoon. But I don't know. 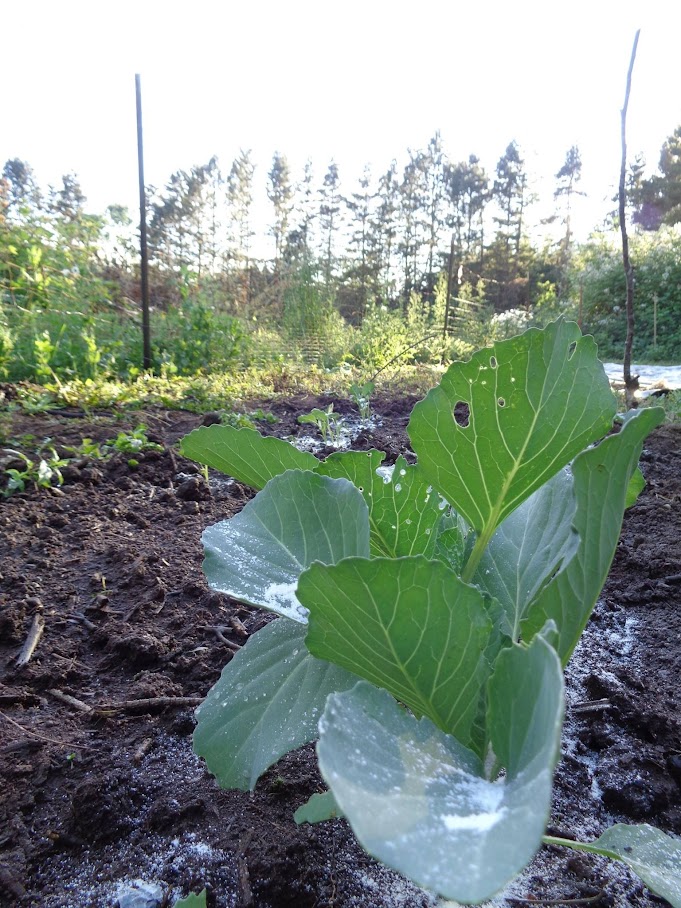 Happy cabbage after a dusting of cornmeal earlier this week. 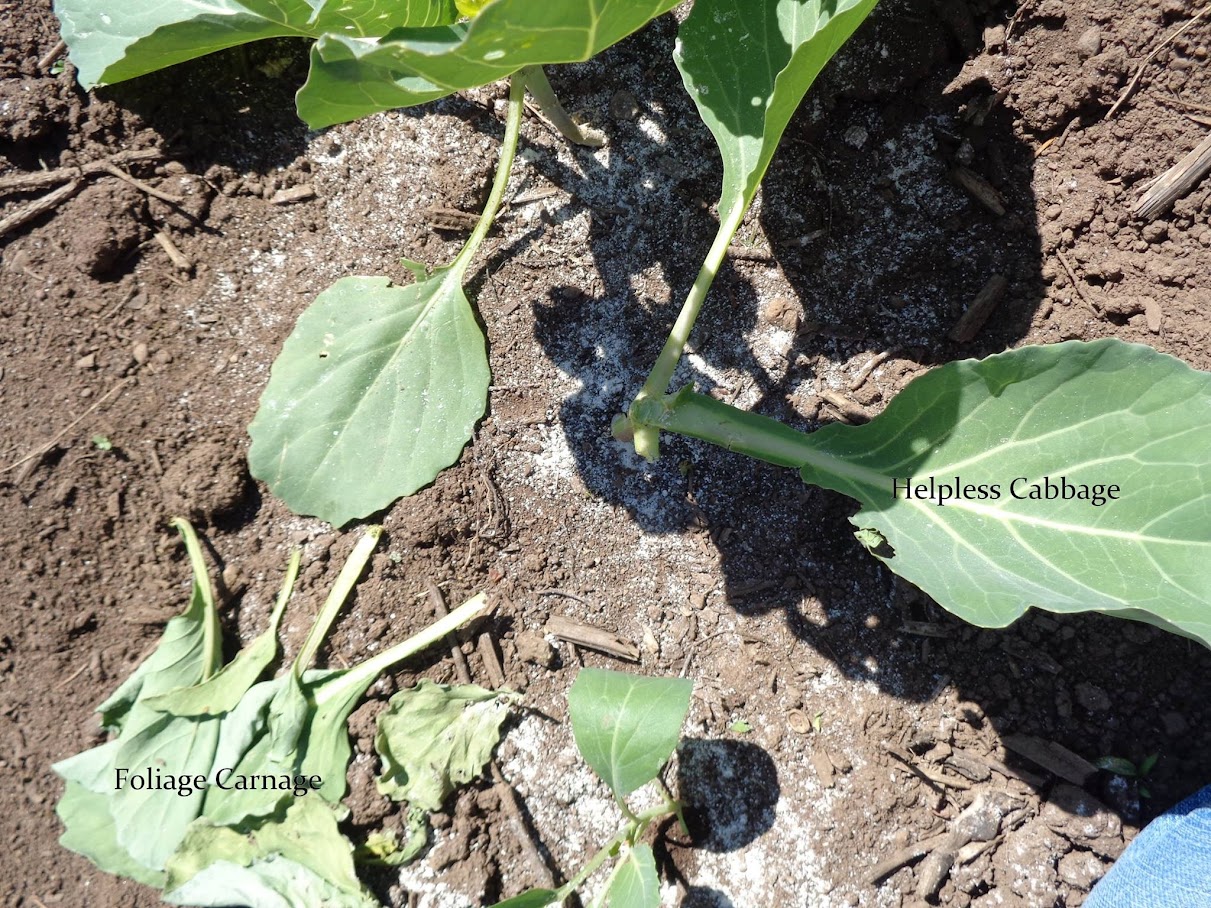 posted 3 years ago
Gardening this year has turned into a slog. The deer keep jumping the fence and eating things down. The cabbage recovered, and we have one good head. But they keep eating the green beans and the tomatoes. On the plus side, we harvested a big basket full of potatoes yesterday. My little brother's watermelons are doing well. And the Hubbard squash is taking off. We are thinking about moving the garden closer to the house and putting up either a taller fence or a double fence.

And Territorial Seed Company deserves a shout-out for their green bean seeds. The plants have repeatedly given beans after being munched down to nubs by the deer.