building a smoker with cob?

Alex Hamond
Posts: 15
posted 7 years ago
Apologies if this is not the most relevant forum for this. If it needs to be moved elsewhere I will have no problem with that.

I view a smoker as being right up there with cast iron in terms of cooking equipment and ours has finally begun to finally wear out. Rust is what killed it. 80% humidity is a normality here, and the metal just hasn't been able to take it.
So I am starting to think about cob, and how for the price of a brand new one, I can build a better one out of cob. Never built anything with cob in my life. But it seems like a fun project. Its ability to maintain heat is great for a smoker. The important thing is that it can be maintained around a couple hundred degrees for long periods of time.

Beyond that I need to figure out a design that is easily cleanable. Size would be relatively small for a smoker, we don't have large parties often, occasionally cooking something as large as a a butterflied turkey or pork butt, might decide on a slightly larger one.

Need to give serious thought into the design. So the WIP design idea is to create a base, cinder blocks are what we have laying around so they will be put to use. About knee high on the base construct what would the firebox in a manner one would make a small cob oven, create a chimney out of the top. Get this all filled in with cob, thick walls, construct a door. Cure cob out with fire. Start assembling a larger chamber that the chimney vents into on top. Construct another chimney and a door. Cure it out.

Some logistical concerns I am having. I would like to have a grate and some means of trapping the grease. Being round kind of makes that seem to be more difficult. I might go for more of a square internal shape, but still a dome. Door wide enough to get grates and drip pans out.

And then there is this thing. Basically it acts as a device that monitors the temperature of the cooking area and regulates the flow of air to into a charcoal grill or smoker, thus controlling the temperature. They claim it will maintain temperature to 5 degrees. I could live without it, but being able to control a wood fired cooker to within 5 degrees is awesome Could be added later depending on how final result cooks.
https://www.youtube.com/watch?v=1l0e-EoUUrE

John Elliott
pollinator
Posts: 2392
88
posted 7 years ago
Lots of people have thought of this -- hundreds of years ago. The way they smoked hams in the Middle Ages was to stuff it up in the chimney for a few days. Those big fireplaces where you could hang a cast iron kettle? Well up inside the flue, they would have big metal hooks and bars set into the bricks and you could place a whole hindquarter of a pig up there to smoke and turn into a ham.

Here's a place with designs for a kiva fireplace. With a little redesign, they should make an excellent cob smoker.

Kiva fireplaces are so cool. I can't write a post about them without including a picture 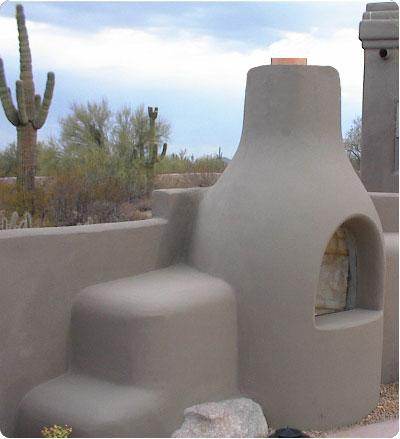 Dave Jameson
Posts: 2
Location: Doodletown, NY
posted 7 years ago
I finished a cob grill and smoker build this year. I knew nothing about smokers and little about cob but its smoking some fine meals. I built the smoking area wide enough for the grates I was using and which
was the same width as the pan I use to catch drippings. This pan also holds sand to absorb the direct heat. After a long smoke, say eight to ten hours, those walls hold much heat. I'm thinking of using that
stored heat to dehydrate food too. 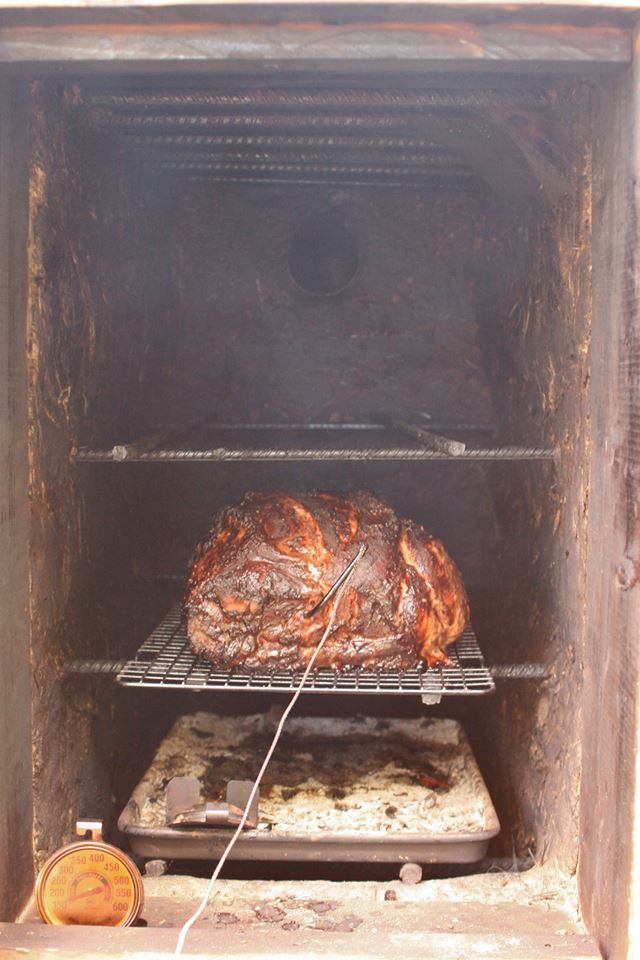 posted 7 years ago
You can get nice hot-smoke effects in a regular cob oven, just leave some coals going on one side with the food on the other.

You could support a rack with just bricks in the sides of the dome. If you try embedding rebar or cross-braces like the above picture shows, I'd recommend padding the tips with some fiberglass woodstove-door gasket or some flexible insulation (like rock wool), so they don't bust a crack in the cob with heat expansion. Same goes for any metal trapped in a hot chamber, in contact with masonry. Pad the edges / corners / ends for expansion joint and it will all last way longer.
Cob is a little more forgiving than concrete in this regard, and easier to patch, but it's nicer not to need to.

There's a fair amount of info online about how to make cob. Just don't get distracted and think it's supposed to be pure clay: the clay is only about 6% to 20% of the mix, the rest is aggregate (sand, gravel, straw) just like with other types of concrete. (You can think of cob as clay-concrete, tarmac as tar-concrete, and cement-based concrete is the stuff we're used to seeing sidewalks made of.)

Our double-chamber cob oven has a front chamber with a chimney over it. You could enlarge this chimney or even build it as two cob walls with racks and a slab / door front, for cabinet-style access. Seal any door vents with something flexible (wood will hold up a surprising amount of time if it's dampened before each use), or use braided woodstove-door gasket. Cap it with a tiny vent, and trap billows of smoke in there.
Our oven was designed to re-burn more of the smoke instead of venting it out, though, so you might want to just mess with the whole design proportions and make it rougher. Higher or lower door, that sort of thing.
You should be able to make a smaller fire in the back and get more smoke, too. Might be able to stage 2 temperatures of smoke, like hot-smoke in the oven itself on a rack over a small fire, and colder-smoke in the chimney area or a chamber above.
You can see some of the detail of the oven I mean in the sample pages here: Cob Oven Plans The full plans have some cob detail too.

Dave Jameson wrote: I finished a cob grill and smoker build this year. I knew nothing about smokers and little about cob but its smoking some fine meals. I built the smoking area wide enough for the grates I was using and which
was the same width as the pan I use to catch drippings. This pan also holds sand to absorb the direct heat. After a long smoke, say eight to ten hours, those walls hold much heat. I'm thinking of using that
stored heat to dehydrate food too.

And it's super cute, too. Nice project.
-Erica

Ghislaine de Lessines
pollinator
Posts: 261
Location: Vermont, annual average precipitation is 39.87 Inches
43
posted 7 years ago
I was just contemplating the same idea yesterday. I was thinking of making a cold smoker with the fire box outside underground or downhill. Aside from wanting to make the foundation from all the stones around here I really hadn't gotten any further.