jesse tack
Posts: 56
Location: SE Michigan, Zone 5
posted 8 years ago
Not sure if this has been posted yet or not. From PRI-Aus, a boom-less hot water design.

Darin Hamel
Posts: 5
Location: Detroit Area with 10 acres in the U.P..
posted 8 years ago
I love this rocket stove idea. I think this is the way I am going to go. Especially not that I might get hot showers and be off the grid at the same time. I love my hot showers. In fact I love to be in the woods but I hate "roughing it." I am all about comfort. Thanks for this post!

John Ram
Posts: 31
Location: Gaia, Portugal
posted 8 years ago
boom-less?
Chris Griffin
Posts: 57
Location: Eastern edge of the Blue Ridge Mnts. Virginia
1
posted 8 years ago
Black Ram: This is "Boom-Less" because the heated section of the water is open to the atmosphere, so no build up of pressure in the main vessel.

Crip Moorey
Posts: 4
posted 8 years ago
might not the water in the heatexchange coil become hot enough to boil and therefore run the risk of a 'boom' if all the faucets were shut?
John Ram
Posts: 31
Location: Gaia, Portugal
posted 8 years ago
thanks chris 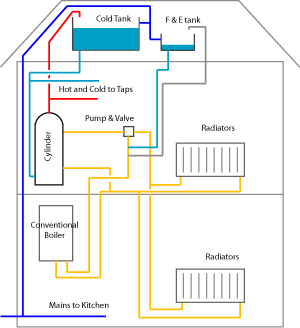 Crip Moorey wrote:might not the water in the heatexchange coil become hot enough to boil and therefore run the risk of a 'boom' if all the faucets were shut?

posted 8 years ago
Wonering how we could run cold water thru those radiators in the summer, to cool the house.

S Bengi wrote:Wonering how we could run cold water thru those radiators in the summer, to cool the house.

The U.S. Navy uses gravity cooling in certain areas, but there is a problem with condensation. A drip pan would be needed to collect the condensation and then it would have to be drained somewhere to reclaim it. If you live in an area that a little extra humidity wouldn't bother you then a system like that may work. If you add a blower to the whole thing you will open a whole new can of worms.

S Bengi wrote:Wonering how we could run cold water thru those radiators in the summer, to cool the house.

You don't really want that.
The mentioned condensation is not just a nuisance of emptying a little distilled water, but usually these radiators are from materials that do rust.
By being covered often in oxygen rich water they can rust. Paint or no paint. (Its different on the inside, since the heating water gives up its oxygen once and receives very little oxygen later.)

Also it is not a nice kind of cooling, it is ineffective in making comfortable air. But if you had floor wall or ceiling heating, you cold install a heat exchanger in your system and cool the water in the system.
Care must be taken to not to cool the surfaces under certain temperature, since even a small amount of condensation can let mold to appear.