I have three paddocks in a line, each approximately 400 x 600'. The internal fences between these are useless, so I am thinking that rather than replacing them, I will form a single large 400 x 1800 paddock and use portable electric fences to do a paddock shift arrangement (we call this "strip grazing" in Australia). I have been using the portable fencing gear to divide some of these large (for my small herd of 20 cattle) paddocks into two or three to concentrate the grazing, but the issue that I have is access to water. Each of the three large paddocks above has a drinking trough (one purpose built from concrete, and the other two are rusting old baths with float valves added). I have tried creating 'corridors' to the water (see attached illustration), but it is very difficult to run the wire around corners like that, and is very time consuming.

So I had a thought, which was to build a water tender (trailer), with drinking troughs fitted to the side, that I could tow behind the tractor as I shift the cattle. I thought that such a thing could even be self powered, by fitting a winch from a pickup truck, a car battery, and an appropriate solar panel. I could keep the concrete trough, which is in good repair, but remove the two bath tubs and just leave a riser with a tap to fill the tender (suitably protected from cattle, of course, since they love nothing more than to scratch themselves on something that has nice sharp edges like a tap.

One final question, noting the herd size and paddock width above, what is the minimum paddock "depth" in order to avoid the containment stress that Paul spoke about in his "raising cattle without hay" podcast. 50' would seem to be reasonable to me, but that is not particularly great density on a 400' wide strip. Another thought I had was to run a new permanent fence down the middle to create two parallel 200 x 1800 paddocks, which would allow double the density with the same 'fence easement' for the cattle.

Appreciate any advice or experience on this one.
StripGrazingTroughAccessProblem.png
Nancy Sinclaire
Posts: 30
1
posted 9 years ago
I am thinking instead of rectangles try triangles. Cut the watering hole like a pie with three equal size but now shape grass areas. Or maybe I am not understanding the issue correctly.
Phil Hawkins
gardener

Nancy Sinclaire wrote:I am thinking instead of rectangles try triangles. Cut the watering hole like a pie with three equal size but now shape grass areas. Or maybe I am not understanding the issue correctly.


Attached is what I think you're describing.

That's true, and it could work if the troughs (and the pipeline to them) was in the centre of a squarish paddock. I would need to reinstate my internal fences and move the troughs though, because they are mostly near one corner unfortunately. Obviously it's harder to accurately gauge the area of each strip because as they get longer, they must get narrower.

Posts: 7926
Location: Currently in Lake Stevens, WA. Home in Spokane
333
posted 9 years ago
The people I worked for in South America had a system like that for the hogs.

It was an arid region (+/- 9" rain per year), but they had a small pond with weeping willows around it. They built the hog shelter under one of the willows, and shifted their hogs radially around the pond. The pastures were wedges, like pieces of pie. Each time they opened the gates on the irrigation system, a ditch would refill the pond/watering hole.

It was rather simple, yet ingenious for their circumstances.

Walter Jeffries
Posts: 1114
Location: Mountains of Vermont, USDA Zone 3
64
posted 9 years ago
We have springs higher up the mountain which we lead into ponds and barrels set in series through the paddocks connected by black plastic pipe. The water flows from one to the next down the mountain. All the barrels stay full. Water everywhere. Very efficient. I find the animals need to be able to get to water within about 1,000' of walking for efficient grazing so I place our barrels accordingly. Many are 65 gallon plastic drums sunk into the ground with a few rocks in them to help piglets or chickens climb back out. 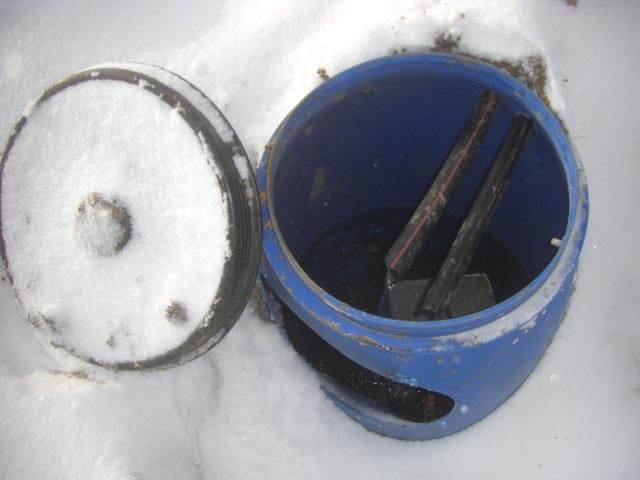 The barrels create a micro-climate that allows the water to be available to the animals even during our cold winters. 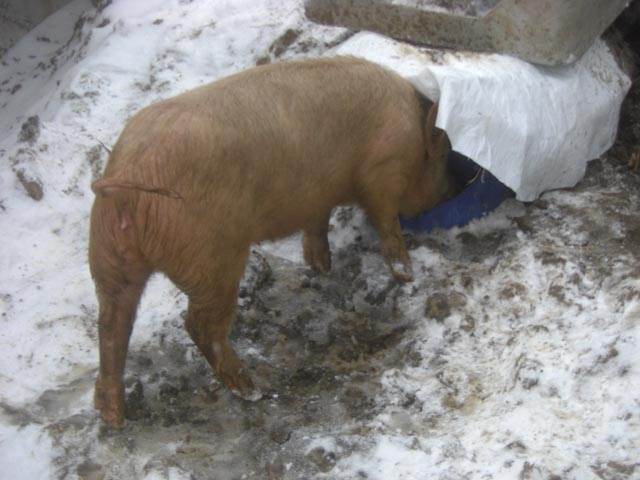 The pig is pushing in a flap that helps keep the micro-climate warmer yet still gives access for the animals. Pipes lead into the barrel and then another set of pipes lead out of the barrel to the next barrel down the slope. We have many thousands of feet of pipe directing the water as needed.

I try to keep this as linear as possible but there are some branches.

-Walter Jeffries
Sugar Mountain Farm
Pastured Pigs, Sheep & Kids
in the mountains of Vermont
http://SugarMtnFarm.com/
Chris Stelzer
Author
Posts: 118
1
posted 9 years ago
Alright, in the first series of pictures, the first one and the 4th one will be too narrow. The area will just be destroyed, and the cattle will have a hard time turning around, causing even more damage. It would be great if you could put a snap coupler on your water line, and then get a heavy duty hose and run that water to a portable tank. However, that seems like a lot more expense and work. So I think how you have it divided up using one straight wire would work best. You could also put down junk hay in this area, and the cattle can trample that into the ground near the watering hole and you will be building soil. Hope that helps

Agricultural Insights Daily Podcast/Blog about Sustainable Agriculture with a focus on livestock and grazing.
The Grazing Book

greg patrick
Posts: 168
Location: SoCal, USDA Zone 10b
3
posted 9 years ago
I like your portable water idea. 50 cattle x 15 gallons/day = 750 gallons, so three IBCs on a trailer would hold 750 gallons of water. It would also weigh 7000#, which might be a problem in the mud. A friend of mine has a gravel road down the middle of his pastures and moves the water mule and electric fencing down the field. Works great.

'Science is the father of knowledge, but opinion breeds ignorance.' - Hippocrates

Thanks for the suggestions (and for the water consumption estimates - I really had no idea how much they drank apart from "a lot"). I have refined this idea a little to include a two windbreaks, and realised that the centre windbreak could contain risers for water, meaning that while the trough was mobile, it could remain connected via regular hosepipe to the main. This means it would not need to store more than a 'buffer' of water, meaning that it could easily be rolled by hand (perhaps weighing a few hundred pounds instead of a few thousand).

Am I overthinking this? 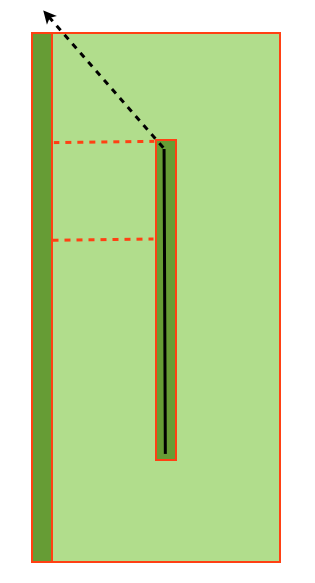 "meaning that while the trough was mobile, it could remain connected via regular hosepipe to the main. This means it would not need to store more than a 'buffer' of water, meaning that it could easily be rolled by hand (perhaps weighing a few hundred pounds instead of a few thousand). "

HI Phil,
You are on to something here. There is a model that draws circles around a water facility in an outward design (think of it looking like a bullseye) showing traffic damage as well grazing intensity the further you get away from the water. Idea is, at center of the bullseye is the water facility and the most intense grazing and traffic damage; furthest away is the least grazed/damaged. As cows have to drink often, they move to the water and usually will neglect areas furthest from the water even in strip grazing operations such as yours and the watering site can become degraded in a hurry. So with your latest model, i would recommend having multiple spigots along this linear windbrake and enough heavy hose on site to reach the middle of each paddock. I know it involves a bit more labor, logistics, investment, and points of maintenance...but your pastures will thank you for it. It will not discourage the areas around the outward perimeter, and the area nearest the wind row will not turn into a mud waller. Good luck and let me know what you decide on.

My design has evolved (simplified) a little more as I got more experience paddock shifting. I am now looking at a single wider windbreak along the western (left) edge, and using my 'dogleg' approach to paddock shift to create the density in the wider paddock.
Andy Reed
Posts: 85
4
posted 9 years ago
I'd put in more troughs, similar to what Walter suggested. Instead of for pigs set it up for cows, just cut a plastic drum in half, add a ballcock and connect it up to your mainline. I use exactly that when I have a mob of a few cows. It's inexpensive and durable, and all else equal will be enough for 20 cows.

Then you can have a simple system of fencing, straight fences are much faster to put up, and you don't run the risk of cows breaking out while you are mucking round, as you do when you are fencing around a trough. Multiple troughs also mean you dont end up with a massive hole around one trough, because it gets hammered by the cows every day.