ryan112ryan McCoy
Posts: 45
posted 9 years ago
Last January I decided to try out some Jerusalem Artichokes in the garden, I planted them in the spring and just harvested them this past week.  All I can say is wow! 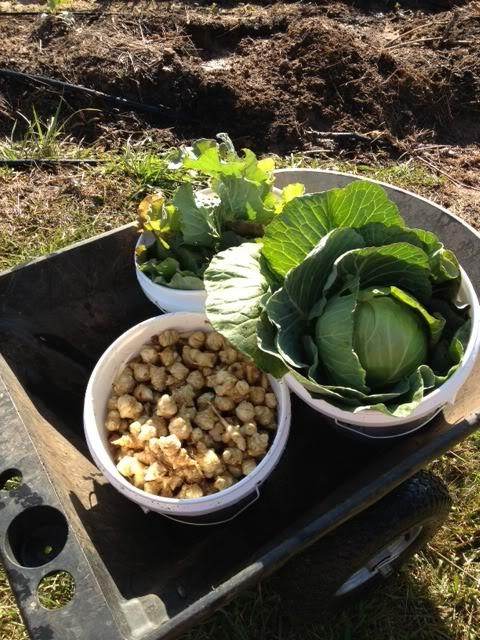 I planted them about 3 feet apart in some rows of mine and just left them there.  A few weeks later I had these potato looking plants, which then shot up to 10 foot tall semi-wood stalks.  Then they stayed there, all season long.  The flowers bloomed and then the plant died a few weeks later.  I literally didn't have to do anything all season except drop a drip tape and mulched over it.   I came back, lopped off the stalks with a machete (which will be great for nitrogen in composting) and dug out the plants.

Most of the Jerusalem Artichokes stuck to the root ball.  I shook off as much dirt as I could and then laid them out and power washed the root balls so that there was just the Jerusalem Artichokes and roots left.  It was easy picking from there.  I had a group of Foodies that really wanted them and was able to sell them at a pretty penny and keep some for me.  I love these things, I can't wait to grow more!

Questions for folks who have grown these before.  I have one plant still in the ground (dead) and I wanted to use most of the tubers to replant for next year.

where you dug your chokes from, you WILL have more plants next year, even stronger plants..so you don't need to replant those holes..the only way you get them all is to dig them in JULY

the plant you have can be left as is, or dug and replanted, trust me, that plant will plant you a very long hedge !!

last year I dug a couple plants to replant, and I moved them into two hedges ..IN GRASS..along a fencerow..

they all grew..not as tall as they should have as the neighbors mowed them a few ..severa..times..but they still came back..

put more fence up to keep neighbors mower out and they are thriving..as well as the other 7 or 8 rows i have in my gardens...boy  those things are healthy !!

I only planted a few tubers and decided to leave them in the ground the first year. However, I'm concerned about voles eating the tubers since they chewed all my sweet potatoes underground.

Brenda Groth
pollinator
Posts: 4437
Location: North Central Michigan
26
posted 9 years ago
haven't had any damage here other than the deer nibbling on the tops over winter..however..i also have 2 cats and neighborhood cats too..so they probably eat any voles

Dan Wallace
Posts: 41
posted 9 years ago
I am all for their productivity but they sure don't call them "fartichokes" for nothing! woowhee
Alison Thomas
pollinator
Posts: 933
Location: France
10
posted 9 years ago
Must they be planted when they are still 'plump' or is a dried out tuber OK?  I have both.

And how deep to plant them?

I've actually never eaten them but I intend to grow these 30 tubers that I asked a friend for as a shade giving 'summer fence' for my veg patch.

Do hens scratch them up or eat the tops as they're pushing through?

Jeffrey Hodgins
Posts: 166
Location: Yucatan Puebla Ontario BC
posted 9 years ago
Sunchokes rot faster than potatoes because they need to be kept moist I think. They dry out and rot, if you want to plant them do it as soon as you dig them.
I planted mine all thru my raspberries last year, about half an acre. I estimate that I now have 500LB after buying 1LB 2 years ago. I've had no luck with them in the tropics thou. I'll let you know if I find a cultivar that works in the tropics or yall can let me know if it can be done.

Diversified Food forest maker . Fill every niche and you'll have less weeds (the weeds are the crop too). Fruit, greens, wild harvest, and nuts as staple. Food processing and preservation are key to self self-sufficiency. Never eat a plant without posetive identification and/or consulting an expert.