BB electricity - sand badge
posted 3 years ago
This is a badge bit (BB) that is part of the PEP curriculum.  Completing this BB is part of getting the sand badge in Electricity.

In this Badge Bit, you will repair a lamp. 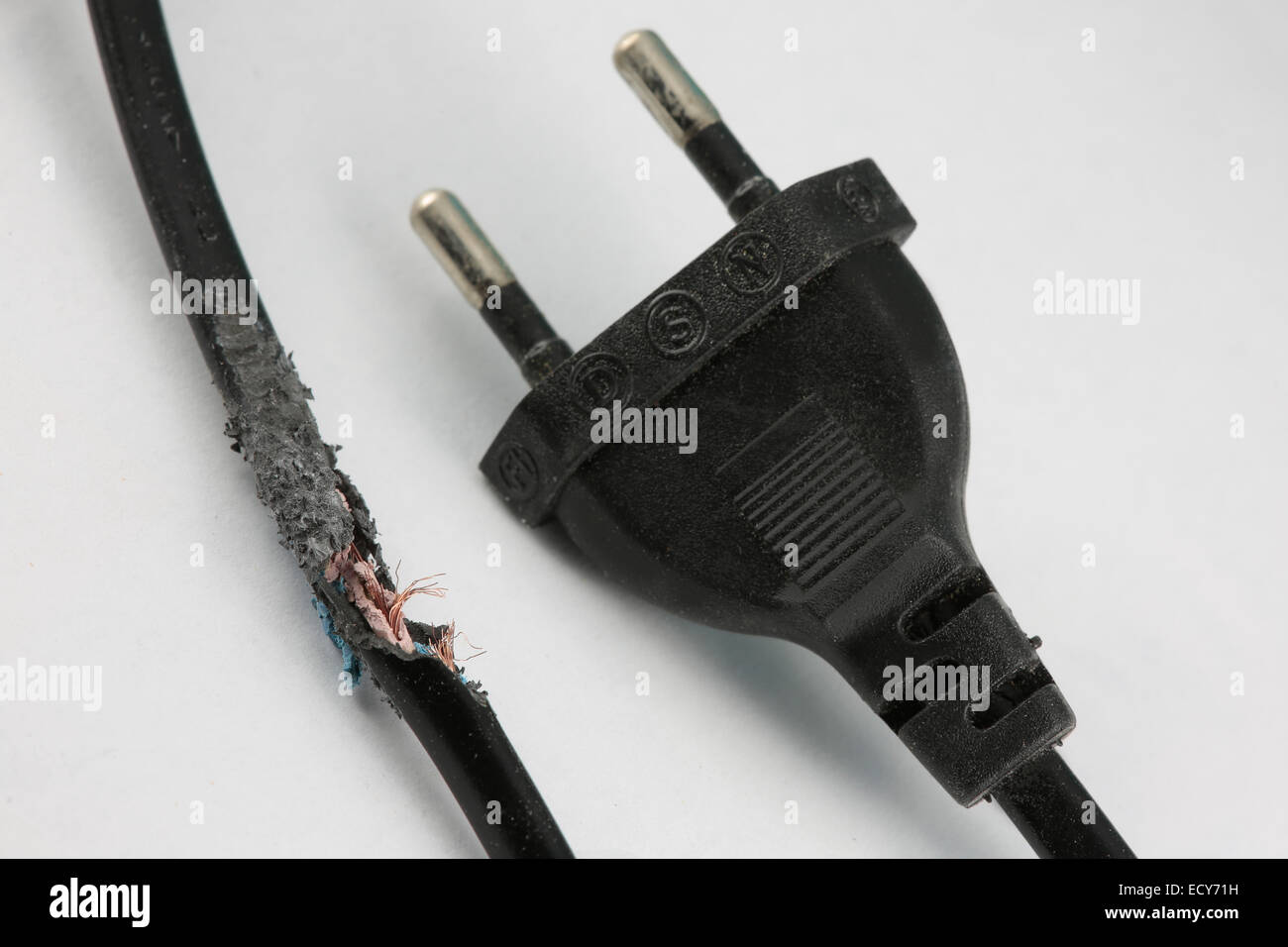 here is a video on how to rewire a AC lamp


Lamps and their wiring vary greatly, just be safe when pursuing this BB

To complete this BB, the minimum requirements are:
- repair a lamp
- this is a true repair, not just replacing a light bulb

posted 2 years ago
Approved BB submission
Hello Permies community. This is my first attempt at the PEP program. I have chosen to fix a lamp and here are the steps I've taken. The full in-depth post can be seen at Permarecycling Lamp Repair

The lamp repair I will demonstrate is the license plate light from our truck that’s been out for years.

This style of lamp socket grounds through its mount so my first thought was to check for a proper ground at the socket.  I filed the rust and paint off two areas just under the plate to bare metal to attach my test leads. I checked for continuity between the two bare areas of metal then between the bare areas and the light socket which showed good continuity to the light. Next step was to check for power or a bad filament.

I probed the wire many times but was unable to find any voltage in the circuit. I chased the wiring and came to the end of the wire which was not attached to anything nor was there anything to attach it to. I removed this lamp from the circuit and tested it at the battery. It did not light so I actually had two issues: no power and a bad filament.

Before installing the new lamp housing I filed away the rust inside its mount then I applied some dielectric grease to the ground area to prevent future rust issues. I decided to tie into the clearance light circuit since it was close and worked. I unplugged the center clearance light and applied its 12 volt current to the pigtail on my new license plate light to be sure it worked inside the mounting area.

Now I had to tie into the circuit. I clipped the wire going to the center clearance light socket then twisted the license plate light wire to it. I then applied dielectric grease to the bare copper and a bit of RTV to the wire casings to keep water out of the connection. I much prefer soldering wires in extreme environments and may come back to this in the future but for now I’m using a heat shrink type crimp connector. All the other wires under this area were crimped and they are still working.
DSC_0114.JPG 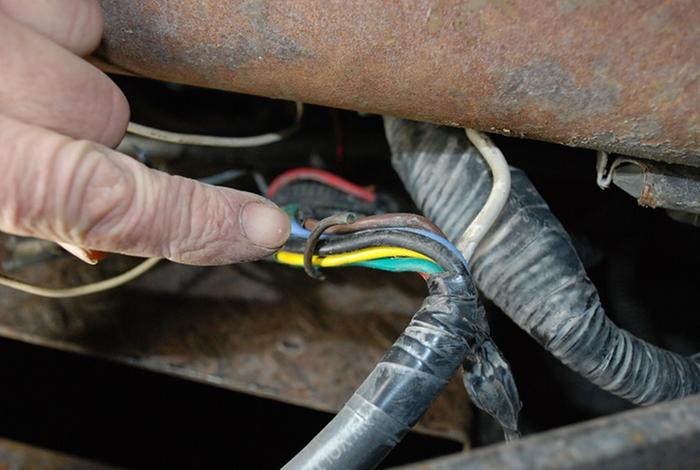 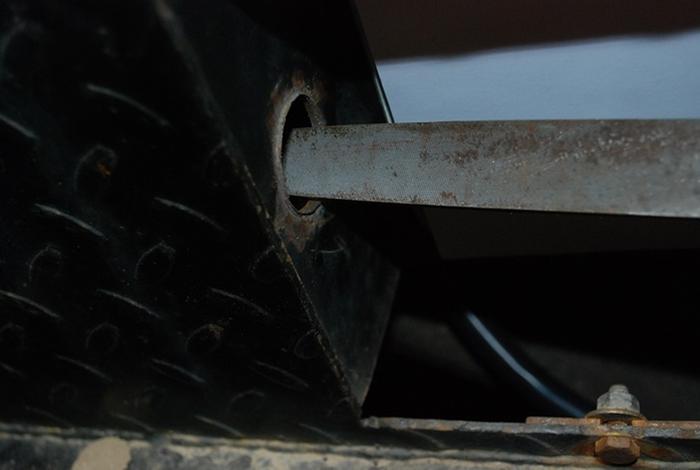 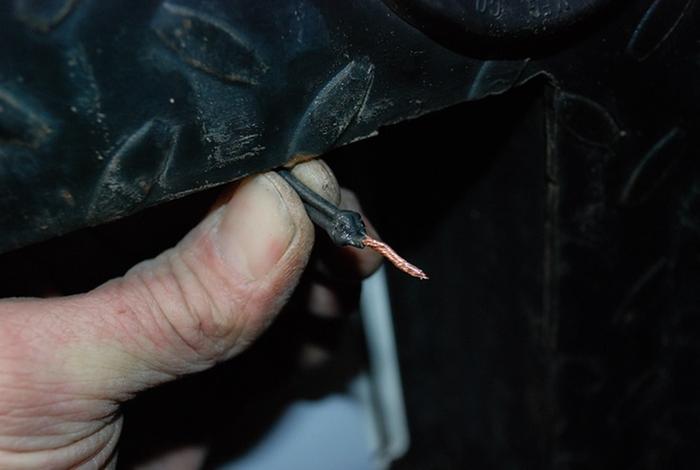 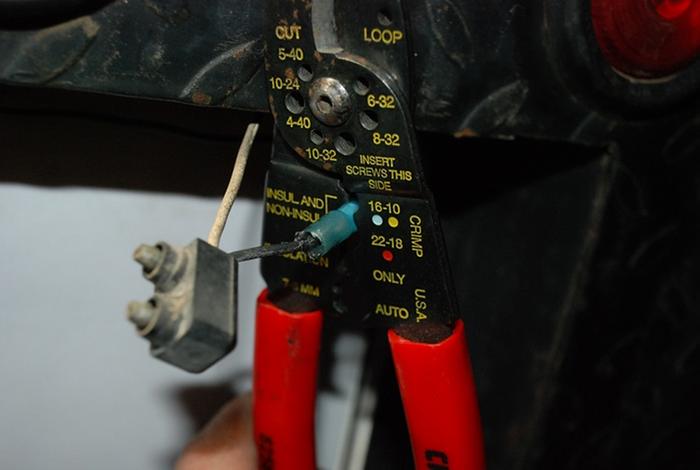 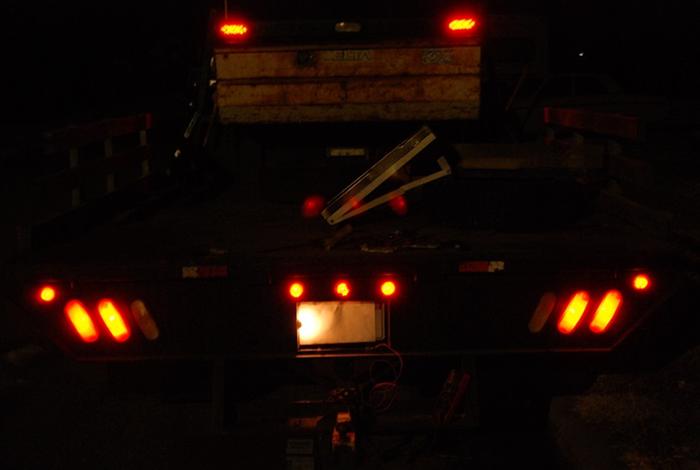 posted 1 year ago
Approved BB submission
Here is my submission for the Electricity - Sand - Repair a Lamp BB.

I am repairing a 120V lamp.  The part I'm replacing is a 3-wire/2-circuit lamp socket with a turn knob.
There is a second lamp socket connected to it so the one knob controls both lamp sockets similar to a 3-way lamp and light bulb.  Instead of low-med-hi, this socket turns on one (pointing up), or the other (pointing down), or both.

Reason for repair: The switch/turn-knob is getting loose and no longer controls the four options distinctly, sometimes turning on both lights when only one should be on.

posted 6 months ago
Approved BB submission
Got an emergency call that the street lights in the parking lot of a set of flats was not working the previous night. Had to take apart most of these bollard lights to find out the problem was burnt out cables from poor installation in this particular lamp... it wouldn't have cause problems until the insulation allowed for an easy path for the electricity to flow, starts small and snowballs, especially out in the weather!

The Lord gave, and the Lord hath taken away; blessed be the name of the Lord. - Job 1:21

posted 2 months ago
Approved BB submission
Moved from my Oddball submission after Mike pointed out that there is a dedicated BB for this.

We bought an old standard/floor lamp from a sale recently. The lamp was turned from a few pieces of oak and is probably close to 80 years old. Sadly, the wiring was rather unsafe as there was no earth on the brass lampholder (the bit which holds the bulb) which was also the on-off switch. This meant that any short would give you a nasty shock if you tried to switch the lamp. The existing wiring was an ugly, two-core twisted pair with brittle insulation.

I stripped out the old wiring and have recycled the copper. I then removed the lampholder and replaced it with a modern equivalent, one that includes an earth terminal. I replaced the wiring with some antique-style three-core which is much prettier (I think) and safer, plus it fits the aesthetic of the lamp. I re-used the existing plug as it felt better quality than a modern one I had lying around. Everything was secured using insulating heat-shrink tubing and tested with a meter before plugging it in.

Finally, I added a foot switch. This is less in-keeping with the age of the lamp but it is very convenient.

Whilst I was doing this, my partner had stripped off the old lampshade (which was shedding plasticky material and was a disgusting nicotine-yellow) and begun to sew a replacement using some unbleached cotton we had lying around. This job took *forever* and I'm thankful that she has the skill and patience to do it.

I've attached an after shot showing the completed shade and re-wired lamp.

All in all, the rewiring took about 45 minutes. It's not the first one that I've done - but standard lamps are fiddlier than table lamps! The only real snag is that I forgot to replace the fuse in the plug. Do'h!

Video of testing, before the shade was installed. 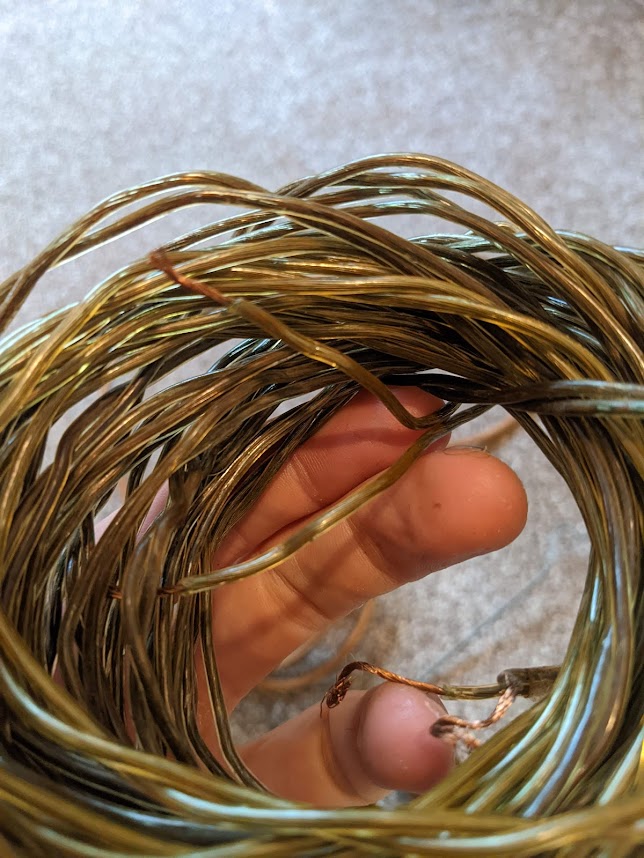 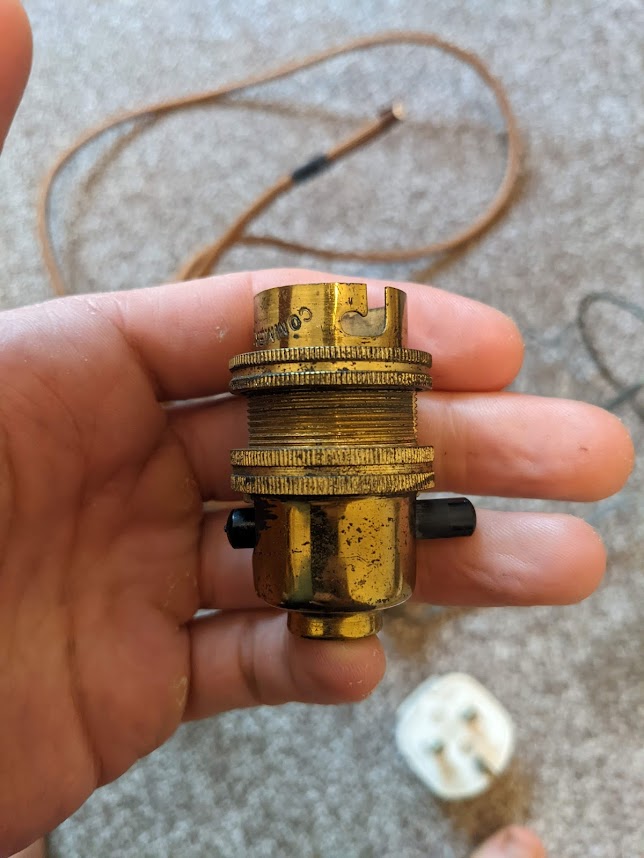 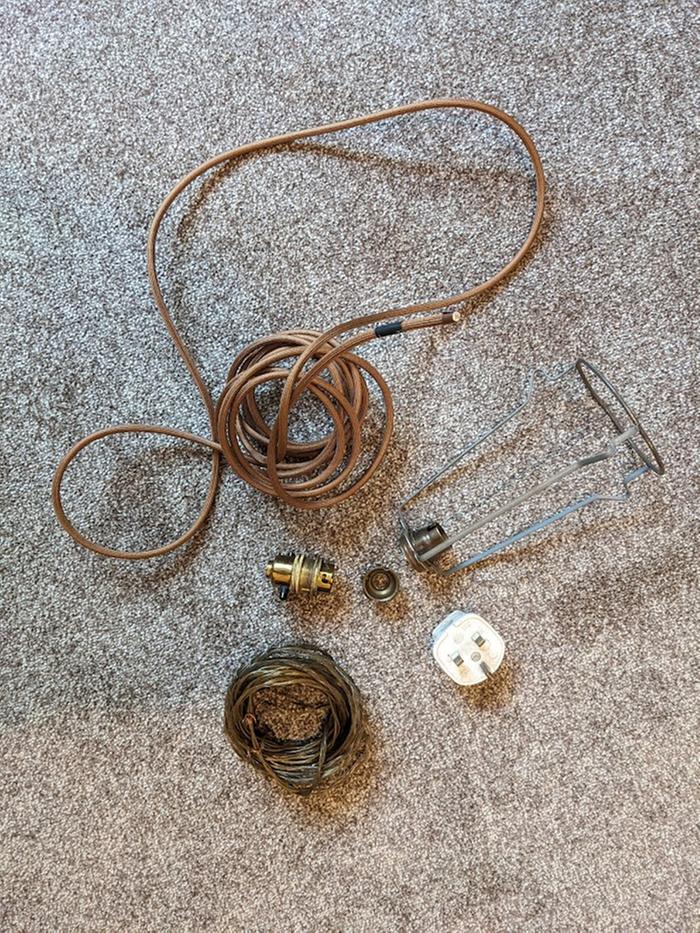 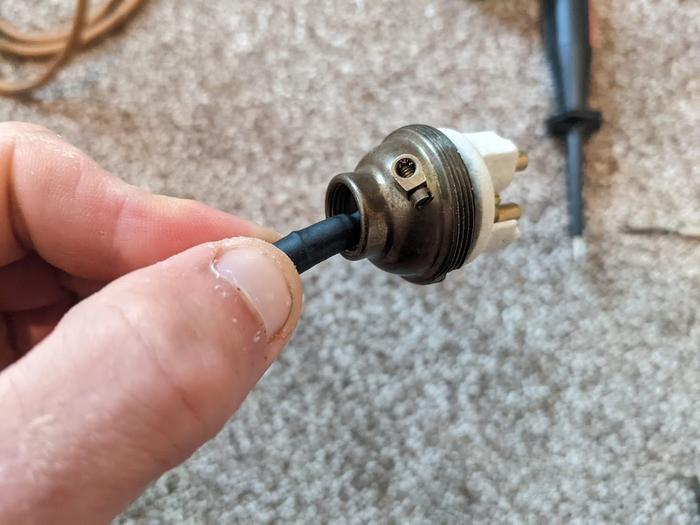 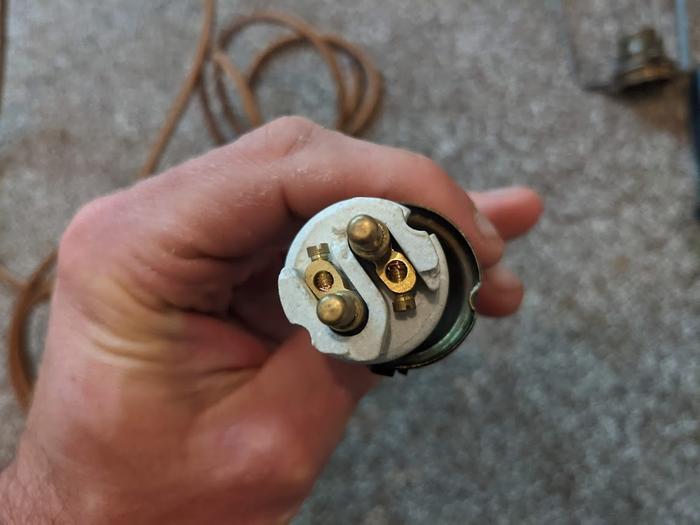 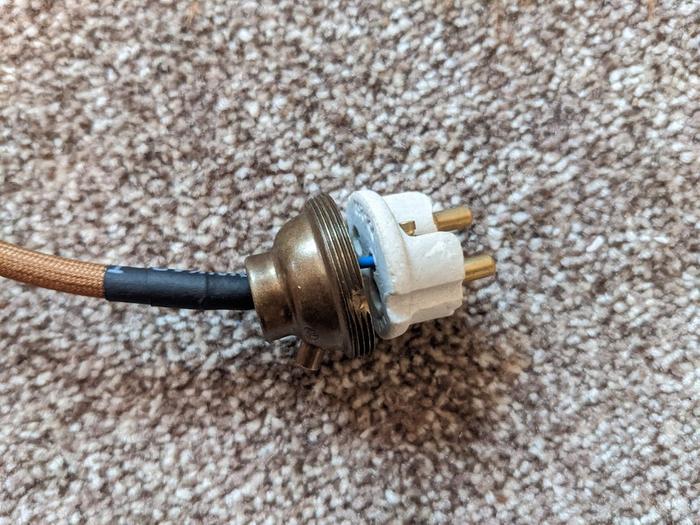 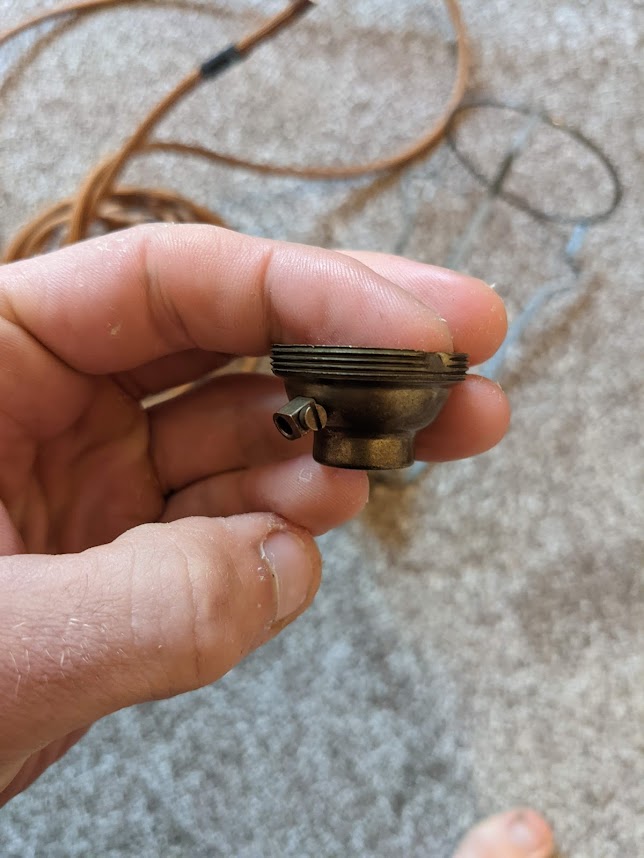 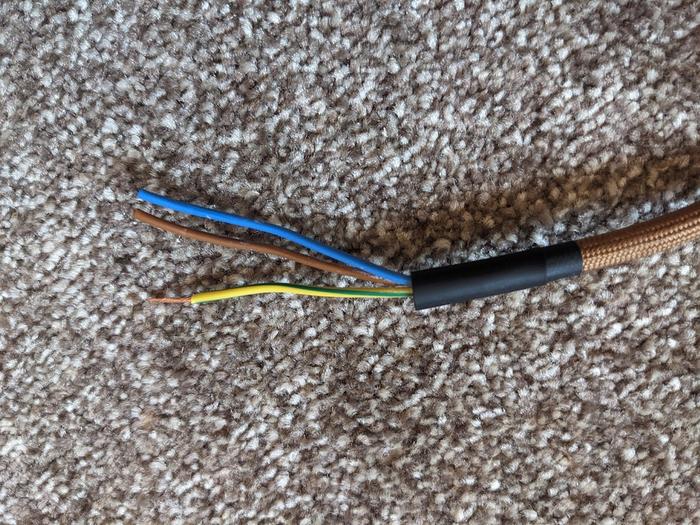 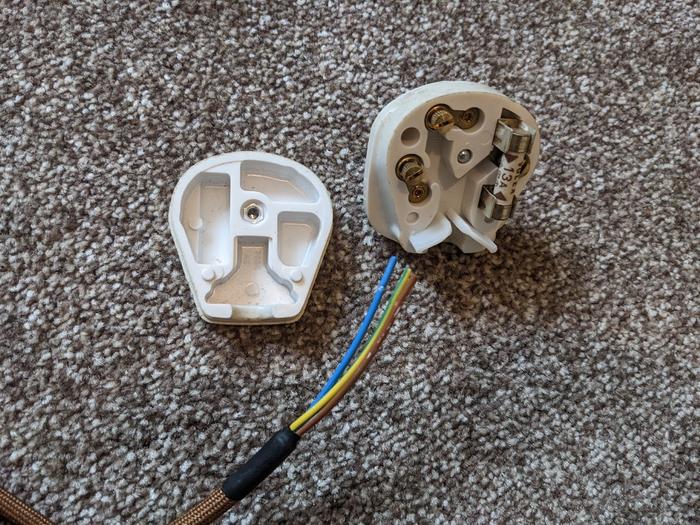 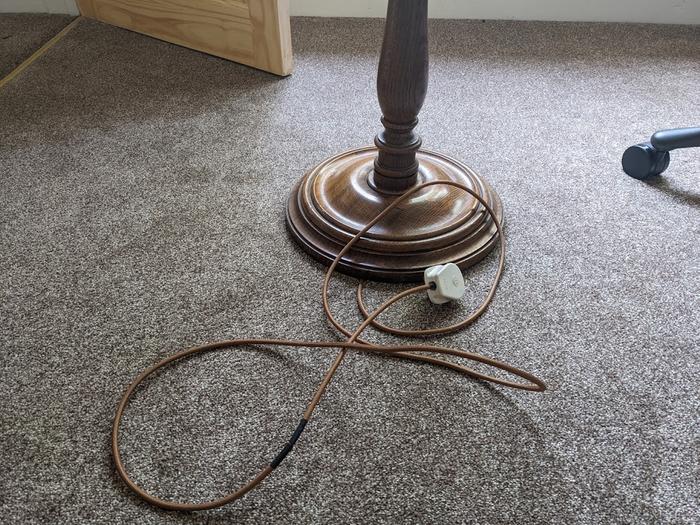 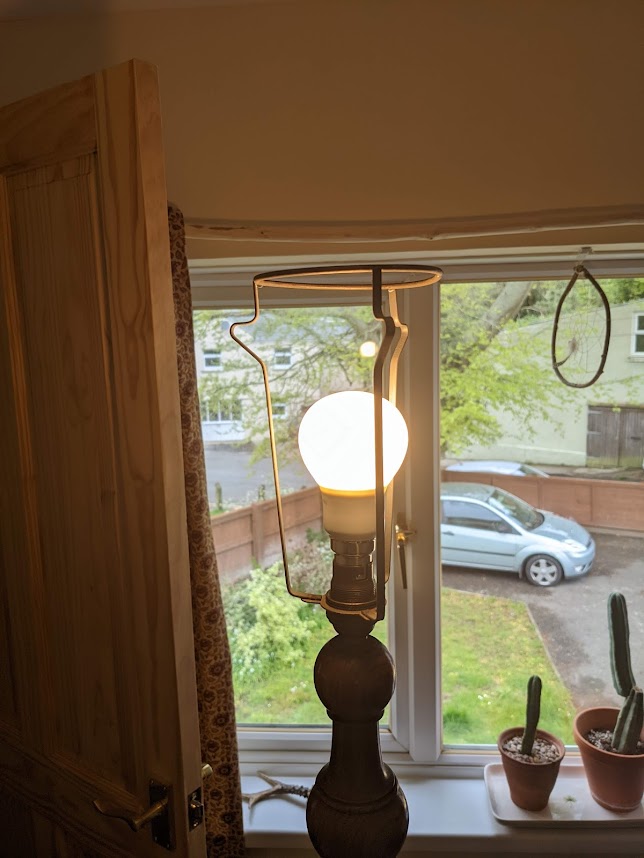 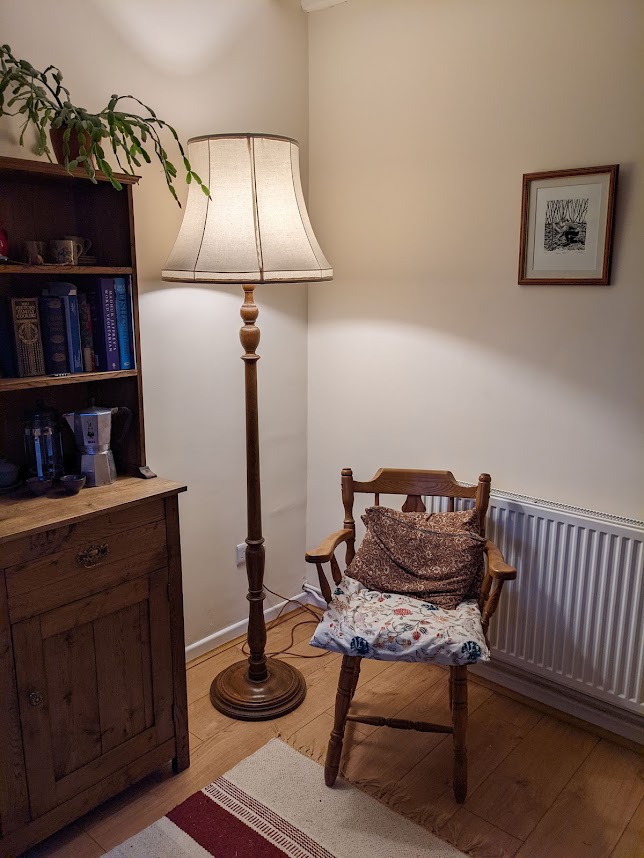 posted 1 month ago
Approved BB submission
My primary lamp by my desk quit working the other day and so I thought, "Hey here's an opportunity to do a BB!"  What went wrong is the little knob that acts as the switch to turn the light on and off just started free spinning instead of clicking it on and off.  So I biked to the hardware store and got a new socket to install.  I almost got one with a different style switch on it, then realized that due to this particular lamp's design I in fact needed one with the turning knob.  I like the ones with the little rod you push through better, but that wouldn't work since one needs to be able to access that type from both sides!  Glad I thought about that before buying it.

Here are the photos' though there really is nothing visible that shows the old socket doesn't work.  I included an image with the new and old socket in the shot to support the claim that I really fixed this and didn't just shoot some images of a perfectly fine working lamp.