What type of construction is your house?

Your profile says that you're in Lake Geneva Switzerland, and I know that while Masonry is common in the cities, a lot of places are still built with a significant amount of wood, especially on upper stories.

From what I can look up online, it seems that Geneva averages 60%+ humidity most of the year. This is important because of the relationship between relative temperature and humidity. If there is a significant change in temperature from the outside-in or vice versa, you are likely to have condensed water on the glazing of the greenhouse. In a dryer climate, it's much less of an issue.

If you have a house that has a significant amount of wood in the south facing exterior wall, I would strongly suggest you deal with a local architect or building scientist on how to detail the attachment, of the greehouse. They might tell you that it's not a good idea, or will require a significant amount of additional ventilation to do without endangering your house to mold and rot issues in the future.

If you do have a house with a southfacing wall that is primarily/only masonry, you shouldn't have any major issues. You should still want to pay close attention to either side of the wall during the first few season, and that will allow you to see if anything develops before it is a health hazard. Make sure that furniture isn't touching that wall so you have a clear view of the entire surface when you're checking.

Best of luck on the new greenhouse!

What I do feel qualified to tell you, is that when liquid based radiant heat is installed in houses, the water is pumped by a circulator pump, on fairly short loops to keep the temperature even, so it won't wreck the flooring above it, and keeps the room relatively well heated.

Another challenge you'll have to figure out is keeping relatively low temperature water (120 - 180 degrees F ).

I suppose if you pump it fast enough around the water jacket that might not be an issue, but it's something you should be aware of.

If you want to check out the commercial products you'll have to either buy or imitate in some manner, check out Uponor, I've designed projects using their radiant ply before, though to the DIYer gypcrete is probably going to be much cheaper.

The project sounds cool, if you go through with it please document it.

I just saw this question and it got me thinking that I'd seen these calculations before.

Unfortunately it's complicated and I can't give you a number that will work for everyone, but the attached white paper goes through the math, and has an example for a home in Southern Germany.

I've never done the math, but you can probably come up with a good approximation by comparing his +/- 138' of 5" diameter pipe, buried 2-5 feet below ground, to pre-condition the air for Southern Germany. If you are in a milder climate you can probably use less, if you're in a more extreme climate you will probably have to use more.
show more
4 years ago
wofati and earth berm
Engineering: Can't find the right span table
Hi JP,

I  don't think I understand what you're trying to calc.

The attached .pdf has all the common loading criteria, you can run the calc yourself using diagram 1 on page 4.

If you have any questions feel free to ask.
show more
4 years ago
wofati and earth berm
Healthy, Sustainable Diet in the Office
I work in an office every day and commute an hour and a half half to work, so cooking time and ease of preparing the meals is really important to me. Over time I've come up with these simple meals that I put together that all cook while I'm at work. Remember that the slow cooker is your friend.

The cheapest and simplest thing I make as far as main course is a roast chicken all in the slow cooker. All I do take a chicken that I bought at the store, spice it, and put it in the slow cooker while I'm at work. I set a timer on the slow cooker so that it only cooks 6 hours. When I come home it's still warm and it's pretty much ready to eat. Interesting thing about slow cooking a chicken is that the chicken meat becomes really fragile and you can make a really good pulled chicken out of it. This means after I had my drumsticks that first night and I shred the rest of the meat, which is really easy, so I can put it into the containers I'll be using for the next 2 or 3 days for lunch. The morning of work I'll take one of the containers out and pour a sauce on it whether that's a homemade or storebought BBQ sauce, honey mustard, red ranch, or even a homemade salsa. I then put some greens on the side to convince myself I'm eating enough of them. I eat this generally at room temperature, so after I take it out of the fridge it stays out on my desk until I'm ready to eat it for lunch.

If you've got a little bit more time you can use the pulled chicken to make chicken salads and those are absolutely fantastic cold. I personally adore curried chicken salads (i copykat the whole foods one) and could eat that for lunch almost every day of the week.

The same technique can be applied to a pork shoulder which I can use to make pulled pork after slow cooking. However I don't personally like cold pork as much as chicken.

I'm going to rattle off a few other main dishes I make for lunch at work though I won't explain them: Steak salds, cold tomato soup, half a baguette and cheese, just about any appetizer you'll find at a nice party, sandwiches with cold cuts (keep mayo or other sauces separate until you are ready to eat so you don't have a soggy mess),  and pasta with pesto (it's not too bad reheated in a microwave).
show more
5 years ago
cooking
Mini cows
I had the opportunity to ask Greg Judy about miniature cattle at PV1.

He told me that if you could sell them to consumers as beef, they would be good on a working farm. But he remarked that selling them was tough, as people have their own ideas about the sizes cuts of meat should be.
show more
6 years ago
cattle

When you consider how many people could be involved in the Wheaton empire if Paul got major traction (permies as a common household subject in 10% of homes in the U.S.) 5-20 people could easily be involved.

Lets say 10 people became dependents of Paul's empire, including himself, that would mean the empire had enough money to run for about 4 years without additional income.

I would definitely prioritize using the money in projects which had prospects to generate a significant income within 4 years, obviously this time line would be dependent on a serious asessment of dependents the empire would acquire.

I'd start off by talking to all the Chefs you could get a hold of and asking what they wanted but had a hard time finding. Focusing on higher value, lower work products like meats. If you had a tibetan restaurant that was looking for yak, you could work towards getting a herd of yaks, etc.

I guess I'd say to follow Sepp's example, and do what no one else does in your area, if you can find a market. The money would be used for paying employees and rapid buildup towards what could finance the empire. The simple fact of how widely it would be publicised would be enough to infect many brains.
show more
7 years ago
wheaton laboratories 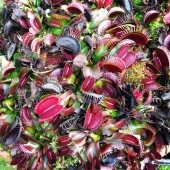 who knew carnivorous plants were so incredibly beautiful?
I've lived in Sonoma and Marin county for the past few years and never ran across that shop. Thanks Cassie!
show more
7 years ago
plants