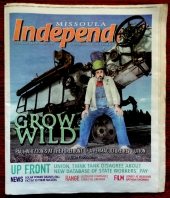 I'm on the cover of the Indy

Paul in article wrote:"You have no idea what a bumper sticker is, do you?"

This topic seems like a no-brainer to me but I admit we need videos like this for those that believe what TPTB tell them.
show more
9 years ago
conservation

wofati eco building
Paul, there would be an uphill patio in these designs, right? Some of the earlier sketches show this, but the latest ones that you posted do not show an opening in the earth on the uphill side of the structure.
show more
9 years ago
wofati and earth berm

Sepp Holzer is coming to Montana

Tim Southwell wrote:
I am there... Missoula, and perhaps Flathead weeklong seminar.  Where can we find more details on this?

Contact Katharina with any questions, her e-mail is found about half way down the page at the above URL.

Sepp Holzer is coming to Montana
Does anyone know if Mike Oehler is aware of this event?  I'd really like to see him as a guest speaker/instructor/student to Michael Pilarski's or Sepp's events.

Maybe I am being too greedy, we will already have a number of great people!

It seems we have similar plans! I am moving to Anaconda this month to buy a bit of land in Deer lodge National Forest at about the same elevation.

Sorry I think I missed your reply, busy getting ready to get the flock out of here.

I will send you a private message to ensure we have a low-tech means of communication, once I get to MT I probably will not have full-time internet.  My schedule has been pushed back by about 3 weeks, due to circumstances beyond my control.

I just read that Sepp will be coming to MT in less than a year.  I am too excited, I must refresh my German language skills from High School in honor of his visit.

Thanks for the reply!!!
Dustin
show more
10 years ago
missoula

where I come from we call those little fellers "tadpoles"

chcarlson wrote:
Dustin - I hope you aren't confusing me with Paul....I don't own even ONE pair of overalls

I cringe at you using the word 'rape' to describe tree cutting, and I may have some feminist allies.

Hi Chris, no I am not confusing you with Paul, I figure he will read all of this though.  I don't have any overalls either, but seeing Paul in his videos sure does make me think about getting some!

I suppose term I chose for the clearcutting was a bit extreme to some, though I didn't have any gender in mind.  Since I was talking about the Earth, that does usually have a feminine label, so I can see if women might be offended.  That happens to males too you know!  Regardless, I treat everyone the same at first, it is only after I get to know someone that I start to lose affection.  I had to use a strong word because I am really worried about the deforestation of the land, as it is causing all the planets in our solar system to heat up!  Global warming!  No - Universe warming!  AHHHHH!!!  I really feel bad for the guilt some people carry, having to believe that it is solely their actions for the change in our climate.  TPTB will do anything to make the masses sad.  Oh that reminds me I left my Suburban running in the driveway, I was warming it up before I was going to drive the .1 miles to 7-11 (it is windy out so I don't feel like walking).  That was a few hours ago, I got sidetracked by typing this reply.  Oh the horror, I bet I caused Mars to melt its polar ice caps just now.

We should be changing the way we live because there is a better way - not because we feel guilty.  If anyone reading this feels guilty, just go buy something - it will make you feel better, perhaps a Prius or a reusable shopping bag.  You want to build a wofati?  NO!  We don't have permits for those!  This paper right here says you have to use the Acme H-type bolt to secure your sill plate to your poured concrete foundation or your house will blow away.  wofati's don't use concrete?  WHAT!?!?!  Absolutely not!  Like Mike Oehler says, building codes were created to protect poor people from bad landlords not keeping the buildings from falling apart - now they are used to make sure you use the construction materials they want you to buy and to keep poor people from building their own house using mostly materials found on their land.

The removal of all the trees does do me several favors, it clears the way for getting a new system established, and it lowered the land value before it was purchased.  I just wish I had some nice trees to use in a building - so I can knock them down myself grrrrr.

Thanks for your input on the trees and plants.  Paul provided me some info on the native species, so I can get those established first.  I do plan on trying to keep more water and more warmth in my little area for as long as possible for the outdoor plants.  I also plan on having a greenhouse, perhaps several, earth-sheltered, and heated beds (most likely rocket mass) for year-round edibles.  I won't attempt any sort of deciduous trees for at least a year, perhaps never.

There will be more than just pine trees, I promise!

Do you have any greenhouses Chris?

Am I the only person that has a problem with the reply window on this forum jumping all around when typing a reply that exceeds the default window size?  The scrollbar jumps to the top every time a letter is input - really annoying.

chcarlson wrote:
Actually, reading your post more thoroughly, it sounds like you're higher up in elevation that I originally thought.

Maybe you're in a montane Douglas fir or lodgepole pine area? With seasonal wetlands!

If I had a seasonal wetland, and wanted food from it, I would definately try to plant some Camas bulbs, or cattails.

There are a ton of medicinal plants that grow in that altitude, where it's a bit wetter.

Elevation is about 6500', and parts of the water origin looks like wetlands, has some natural pools, and feeds into a creek that originates at about 7200'.  I was surprised there were no cattails!  I could have been standing on their carcasses and not realized it though.

Mostly Lodge Pole Pine in the area, some Douglas Fir.  I believe it was the Lodge Pole Pine that was raped from the land.  The logger really did a number on the system.  I think this bit of land produced some really nice trees too, probably because of the water on both sides.  Oh well, that means whatever I do will only make it better.

How far do you think can I dig before I reach huge boulders?

show more
10 years ago
missoula
Seed mix for Montana (directed at Paul + others in MT)
My mention of bamboo was to try to gauge the climate.  I have heard of it surviving in extreme climates - I figure if bamboo can do it, I can do it.  I've never planted the stuff because I don't like the way it behaves!  I would use it, however, as a protective fence if the werewolves got too bad in the area, that would be cool.

Yes, you are certainly right about the water, but I have a few ideas to help keep it around!!!  The area does seem to have a good bit of seasonal wetland.  The soil in these areas was very dark, and had similarities in my mind to the wetlands I have seen in swamps and Chesapeake Bay watershed wetlands.  Yet nothing but grass and rocks.  The heavy parts, thick and muddy, had these tight bunches of broken brown stalks.  Some were very large, and I used these root balls to stay out of the mud.

Unlike you, I read the $50 and Up Underground House back in the late 90's, I wasn't freaky about the word "underground" like you were

I don't mind your opinion - I will be counting on it.  Permaculture and earth-integrated structures have been in my mindset since I could pick up a shovel.  When I was young I buried a painted 2x4 into the ground.  I wanted to see how long it would last if I built a cheap underground fort to play in.  I've been soaking the ideas of those that have attempted this before I have for years.  If all goes my way, I am going to make the Satellite Photo of my Woodland much more healthy looking!

When are you going to build a wofati?  I had seen this forum before, and read many posts at the time I was looking into Sepp.  However, when a friend sent me a link to your recent podcast at http://www.thesurvivalpodcast.com/episode-612-paul-wheaton-on-hugelkultur-and-wofati-eco-buildings , I decided to make contact with you because your location and methods seem almost identical to mine.

Thanks for trying to help people live better!
show more
10 years ago
missoula