Elaborate ad for 33/f in Colorado
I liked skiing through the trees best, all alone, on virgin snow, blazing my own path where I could just lay down and meditate on a gorgeous winter day and know nobody was going to come behind me and plow me over.  Of course, if you get stuck or hurt out there in the woods, you'd be in real trouble!

This was back when I could ski, at least.

Emmy, that photo of you in skier/snow boarder gear is adorable!
show more
1 day ago
permaculture singles

Elaborate ad for 33/f in Colorado
Thanks for explaining.  I'm not familiar with Dan Savage or his podcast, but I'd say I agree with him on this point.  My most recent girlfriend opened my horizons to all manner of kink that I'd never experienced before.  But I was game to give it a go, and in the end I found I was more into it than even she was.

I was intrigued by your skeptical comments regarding permie homesteading in Colorado.  I'm sure I wouldn't know.  Seemed like a lovely state to me, but I've only ever visited, and then only in Denver, Boulder, and a couple of ski resorts.

I totally appreciate your commitment to the area for as long as your son is in school.  If you've found a good one, then stick with it, because they aren't easy to find!
show more
3 days ago
permaculture singles

I just have to ask...  You described yourself as "sex positive/good-giving-game"  Good... giving... game... uh, what game?  Huh?  I'm afraid that bit went right over my head.  Could you explain?  Inquiring minds want to know!  ; )

Otherwise, I was impressed by your post.  You obviously take this seriously, which right there puts you in the 90th percentile.  I have been dating online for many years, off and on, and I am forever amazed at how many people decide to put themselves "out there" on an online dating site, but then apparently only dedicate 5 minutes to their own profile.  A few generic cliches and a single crappy photo and they think they're good to go.  I mean for God's sake, you're advertising yourself, people - put a little work into it!

And they're shopping for romance, which most of us would consider kinda important.  Without even a tiny bit of thoughtful introspection, how on earth do they expect to get any good results?  How do they expect perspective mates to find them if they haven't expressed anything remotely telling about themselves?

I also wanted you to know that I laughed at your reference to the DC sprawl as "a shit show of unbalanced people."  I grew up in Southern Maryland, then lived in Arlington VA, worked in Northwest DC.  I know just what you mean.  I don't know if I'd be quite as hard on them as all that, but I will say I'm in no hurry to go back.  I think I could say as much for any dense metro area, though.

As for myself, I'm afraid I live far, far from Colorado.  And my own little piece of land that I'm developing into a suburban-scale permie homestead is far, far from an "ecovillage."  Still, I wish you all the best luck in love, life, and gardening : )
show more
4 days ago
permaculture singles

What exactly is a Chinese greenhouse?

Dave Bross wrote:Some articles on Chinese greenhouses and Russian ones:

Angelika Maier wrote:I don't know about xylitol, I would be careful with these things!


This poster never explained herself, so not sure exactly what she meant to say by "I would be careful."

But xylitol is great stuff!  I cook with it all the time, and it is indeed an ingredient in the DIY tooth powder I use to brush.

For anyone who doesn't know, xylitol is a type of sugar alcohol used by some as a substitute for table sugar (i.e. sucrose).  Other sugar alcohols you might run into as sweeteners include mannitol, sorbitol, or erythritol.

Although xylitol does exist in nature - it is found in some fruits - the commercially available stuff is synthesized through a chemical process using lignocellulose (i.e. woody plant matter) as feed stock.  Always look for xylitol made from 100% birch wood, and preferably made in the USA (at least for American customers).  The other common feed stock is corn cobs.  The problem is that this almost certainly implies GMO, since most corn these days is.  Particularly if the xylitol is sourced from abroad (read: China).

Xylitol tastes as close to real sugar as any substitute I've ever eaten, with no odd aftertaste.  I'd say it is about 90% as sweet as sucrose, pound for pound.  But it only contains about 60% of the calories.  Even better, it has only a tiny fraction of the glycemic index that sugar does.  We're talking single digits!  So, in xylitol you have a sweetener that could pass for real sugar in a blind taste test, yet can be eaten by a diabetic.

And the reason xylitol pops up in this thread: whereas sugar feeds unhealthy bacteria that rot your teeth, xylitol actually discourages those bacteria.  This is why you see it added to chewing gums, in which it has been used for many decades.  It is a "sugar" that is truly good for your dental health!

In the kitchen, be warned that xylitol doesn't dissolve nearly as readily as does sugar, though it is still great for baking.  Also, eating large amounts at once is known to cause GI upsets (gas, diarrhea, etc.), because a significant amount that doesn't absorb through the intestines instead ferments inside the gut.  This is common to all sugar alcohols.  Not at all dangerous, but potentially unpleasant.  I've never eaten enough to experience this myself, so I'm guessing it requires really large doses.  Be cautious; your mileage may vary.
show more
1 month ago
personal care
fire cider leftovers

Elva Alice Hunter wrote:I love learning something new - and I'd never heard of Fire Cider until now!  I can't tell from this thread if it just stays on your counter, or lives in the refrigerator.  Is it something you could jar up and preserve?  Thanks!


Good question.  Fire Cider does not need refrigeration, nor canning.  It is just a dense herbal infusion in vinegar, so the acetic acid keeps it from going bad.  That is why people ferment vinegar in the first place; it is shelf stable!

Now, as for the left-over solids that are strained out of the Fire Cider once it has soaked for a month - which are the subject of this thread - those I stash in my freezer until I'm ready to use them.
show more
1 month ago
fermentation

my seed bombs are exploding! (with seedlings :)
Is a "seed bomb" just a larger version of a "seed ball"?

before composting - save your vegetable scraps to make veggie broth
@Morfydd St. Clair - Thanks for the links.  Some great info!  I currently have a tomato plant in a pot that has spectacularly failed to produce fruit, but it has plenty of leaves.  I will experiment with them in the kitchen along the lines in your article.  Exciting!
show more
1 month ago
cooking

before composting - save your vegetable scraps to make veggie broth


I use broth like this for everything.  Soups and stews, of course, but also the "water" I use when making bread dough or boiling grains or pastas is always homemade bone-&-veggie-scrap broth!  Great that there is a thread here dedicated to this wonderful, frugal, and nutritious practice.

NO apple seeds in the apple cores - cyanide, I get it.

NO brassicas - I'm guessing that is just a personal preference due to the taste?  I include these in my broth and have never noticed the taste to be too noticeable.  I even use the tougher bases of asparagus!

NO nightshade stems - I would really like an explanation for this one.  I am guessing that the poisons present in belladonna exist in the leaves (and stems?) of other nightshades, but is this really much of a concern?  I am just curious to learn the science behind this...?
show more
1 month ago
cooking

Morgan Caraway wrote:I just wrote a blog post about the bottle walls we've built. Our largest yet was in our earthship-inspired earthbag house. 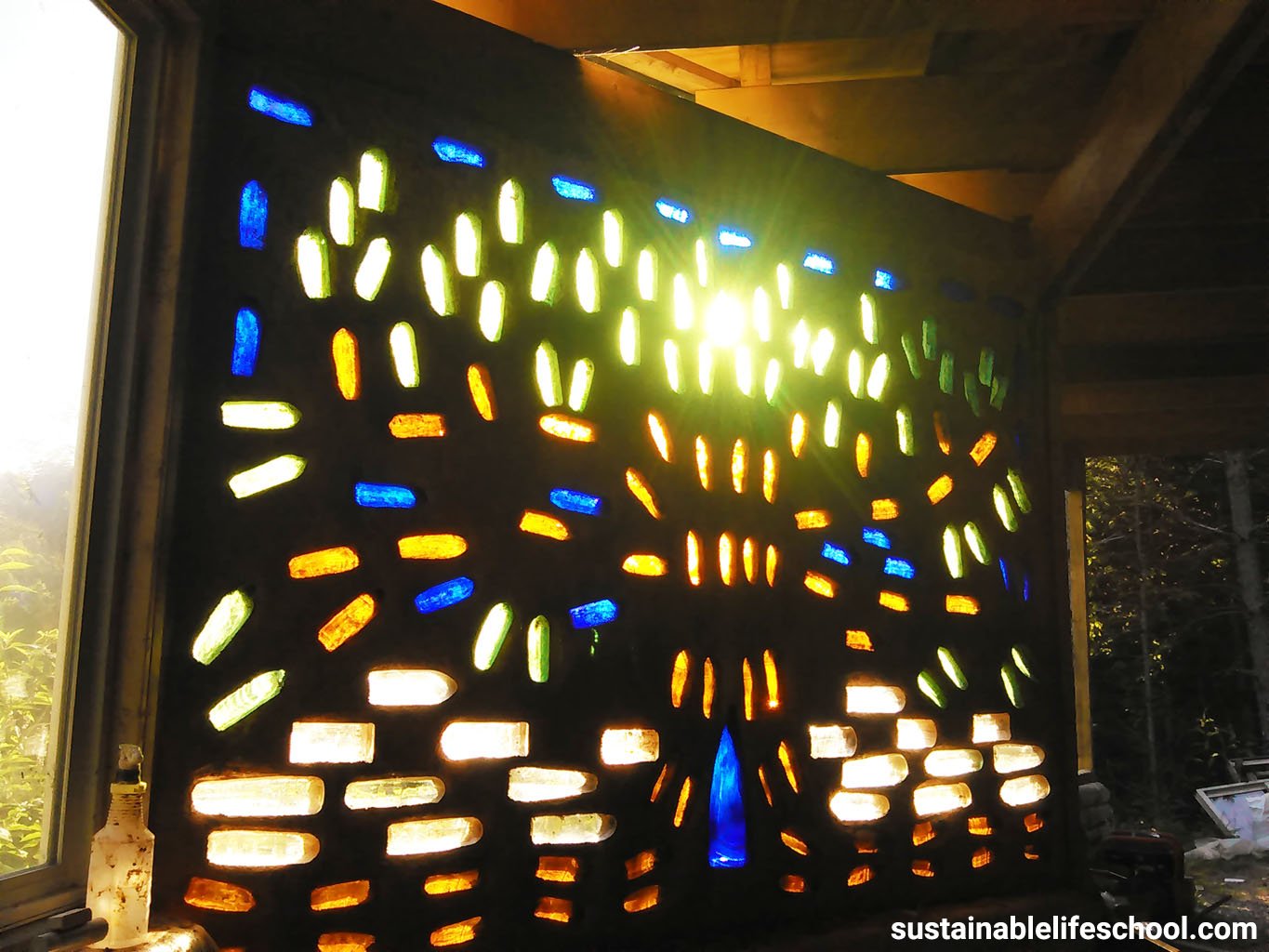 Very nice!  I'm sorry I didn't get to see your house while attending last year's RMH build next door.  Maybe another time.  I'd never really appreciated bottle walls until I saw them there in person.  I suppose the prior examples I'd seen first hand were underwhelming, but now I do appreciate that a bottle wall done well can be a nice addition to the right type of structure.
show more
1 month ago
earth bag