making wooden pitchforks
Not even a little!
I have loved this thread and, now, will have to try my hand at it, thank you so much!
show more
7 years ago
woodworking 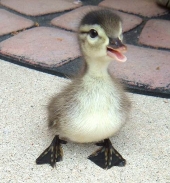 Well, my Muscovy Hen came home one day with SURPRISE! 16 little ducklings following... apparently, she'd made a nest outside the duckie yard... it was literally a little duckie amoeba, that ebbed and flowed all over the yard. Pretty cute.. TOO cute, indeed, cute overload. They now have homes, save the three largest. They will... ah... grace the table at some point.

duckling pictures
Ok! this is cute enough for this luddite to go and find my duckling photos, and figure out how to post them... as they say "brb"....
show more
8 years ago
meaningless drivel

Jerusalem Artichokes / Sunchokes in Missoula
Great video! I DO eat mine raw for fun sometimes, as well as cooked, and, I also hadn't heard that one should cook them long and slow for more nutrient... Does anyone have a recipe for that?

My thanks! Duh, I should have thought of that, it is a very good solution, and, I will try it asap! I intend to remove the vines very soon, and can scoop up the larvae as I do so... there should still be more than enough to further stock the compost basket and to give my ducks a nice little boost of yumminess.

I've been doing some research on the BSF stuffs for a bit, and was considering even buying (or making) one of those bio thingies that help to breed them efficiently enough to use as feed for chickens, etc, as well as taking care of compost.

This spring I built me a keyhole garden, with the compost basket in the middle and have been steadily tossing all waste in there. I planted sweet potatoes (which, grew like a charm, but, never produced tubers, I think my soil was too compacted, will fix that for next spring's planting)


Oddly, despite copious amounts of compost, I could never fill the basket...I'd assumed that I'd fill it, then, switch to my compost pile, and then back.. but... no!

So, a couple of weeks ago, I went to push aside the vines and check yet another time to see if there were tubers, before ripping the vines out to prepare for fall plantings... but..
Under the vines, I saw bazillions of black larvae... (ok, actually, really really a lot...) Initially squicked, I looked closer, and realized, Black Soldier Fly larvae! YAY!

I can't fill up the basket, because it is being consumed faster than I can place it in there. AND, I notice that the vines closest to the basket where twice as large as the vines at the edges of the garden.

Now, if only I could find a way to capture the larvae to feed my ducks.... any ideas?

Here is my home made, inexpensive, better for the arthritic back, keyhole garden:

paul needs to change
You are giving out great info. For free. On your own time. Sure, the quality could be better, (as in EVERY thing can ALWAYS be better...) so, someone should buy you a new camera if it bugs them that much! Or, volunteer to help with editing, or shooting, or make one themselves...

Someone asking: " if you could hold the camera a bit more steady, so I could see the plants better?" is fairly reasonable, and constructive. Demanding 'better quality', that you edit what you say, that you DON'T talk at all! is not.
By and large, if they don't like them, they should not watch them. Or, listen to them.

Don't change the essential you-ness of these... they make the videos great! PIE!
Sure, things can always be improved, but, if that improvement takes time away from the making of the video, or makes you more stilted, or makes you feel uncomfy, don't do it. You don't have to. They are YOUR videos.

I've volunteered among a community of artists and makers for over 10 years now. We have a list like this one and it is unstated policy that if someone negatively criticizes another's work or ideas, then, they are 'voluntold' to do it better themselves. This cuts down on the number of "you should do it THIS way.." posts, and oddly, has led to some folks actually DOING stuff!

show more
9 years ago
tinkering with this site

Rather be farming
You are lovely, and I almost wish I were male!  I surely hope you trip over a right person soon. Your place sounds wonderful.
Good luck!

Yes, I spent last weekend putting in half inch line down the staggered trees, and emitter line from there to each little tree's dripline.
It might be like closing the barn door AFTER the horse...etc., etc.!
However, with this constant hot wind, I am not sure they would have made it anyway. But, I'll be more ready next year, and hope it is a less windy spring...
Cherries!  That would be a rare treat.

show more
10 years ago
homestead
Sweet cherries for SOutherners!!!
Nice! I got the MInnie Royal and Royal Lee here, in Elgin, just east of Austin, Texas. I was so hoping... however, they died, not sure if it was my bad, but at least partly this drought we are having here, and the unusual winds this time of year... their poor tiny tender leaves dried up as soon as the little guys put them out, from the hot constant high wind. However, I will try again next year....
Please, let us know how yours turn out!