Is it possible to survive long-term on just the three sisters?

Mk Neal wrote:For a fascinating description of traditional Hidatsa methods of growing, processing, storing, and cooking the "three sisters"and other native crops, read "Native American Gardening: Buffalobird-Woman's Guide to Traditional Methods." by Gilbert L. Wilson, Dover Publication 2005.  This is a republication of a 1917 University of Minnesota bulletin titled "Agriculture of the Hidatsa Indians: An Indian Interpretation."

Buffalobird Woman describes many treatments and uses of corn in particular that surprised me. Some portion of the corn crop was picked green (e.g. like sweet corn), parboiled, shelled, and dried for winter use. I wonder if this method of preparing corn for storage at its "green"stage preserves some of the vitamins present in the green corn that may be different from those in the fully mature grain corn? Could be a way to get a fuller range of nutrients through the winter.

Exactly - dehydrated sweet corn is more of a vegetable and helps to keep a 3 sisters diet from becoming monotonous. Mature dry sweet corn can be parched for another variation to the diet. We make hominy weekly from our flint corn. You can do this with dent, flour, even pop corn and sorghum - they just have differing cooking times. Hominy is more nutritious and tastes great. It's what we're having for lunch today with beans and salsa (a decontructed tortilla). Of course you can make tortillas if you have the inclination. The hominy can also be tossed in soups and is great served with a marinara sauce as a gluten-free pasta substitute. As for squash, I think it was Carol Deppe who pointed out that most squash eaten by natives in the winter weren'y necessarily "winter" squash varieties. They didn't have root cellars or rodent-free places to store squash but rather dehydrated squash to be reconstituted later. Any squash was suitable for this method of storage.
show more
2 weeks ago
plants 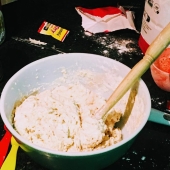 Wheat VS. The three sisters
We rely heavily on 3 sisters crops here in Minnesota. They do extremely well for us, as does grain sorghum and amaranth. Cereal grains in small plantings are targeted by birds and unless you're growing a field of them you won't have any left to eat, so for that reason we buy millet and oats. Sorghum does well with minimal rainfall, amaranth can survive some drought, corn needs more water. Planting all of them covers the bases. Beans like water except in the dry down stage, but even in a wet year there are techniques for getting a good harvest. We also have dry peas and cowpeas as part of our legume supply. Squash is a major calorie contributor and the butternut types keep extremely well. I would add potatoes and sweet potatoes to the list of staple crops that we rely on instead of small grains. By the way, we work our entire garden with hand tools and harvest and process the crops by hand also, although we have taken to using a leaf shredder to thresh amaranth the past couple of years (we are in our mid '60s now).
show more
2 weeks ago
plants
Chainsaw oil a risk to compost pile?
What do you make of the various warnings that vegetable oil isn't thick enough, so the bars and chains wear out, the cut isn't lubricated well enough, etc?

I think they process the oil, maybe by cooking it a bit as it looks brownish and is thicker than cooking oil. The stuff we have is canola based and came from Bailey's, link here https://www.baileysonline.com/motion-lotion-biodegradable-bar-chain-oil-1-gallon-17070.html

show more
1 month ago
homestead
Chainsaw oil a risk to compost pile?
We've used vegetable oil-based chainsaw bar oil for many years. No stink at all, especially since the saws we use are electric, both corded and battery. I've read that some folks mix mushroom spawn into the bar oil and then can innoculate logs/stumps while cutting. Haven't tried this myself.
show more
1 month ago
homestead 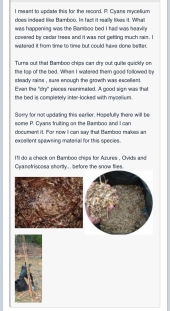 I’d like to know all the different wood chips I can use for Wine Cap production.
We've been growing wine caps on hazelnut prunings that we chip in the spring. As for putting it in garden pathways, I think that walking on the chips would potentially injure the young 'shrooms as they begin to emerge and mess up the bed. We don't walk on ours but the deer sure do and they damage anything coming up. The bulk of the fruiting seems to happen nearer the edges so if you can avoid foot traffic on those areas that would be best.
show more
1 month ago
fungi 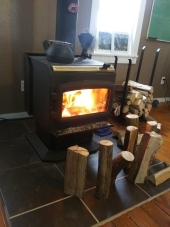 Thermal Mass for Wood Stove
We built a "hybrid" masonry stove starting with a wood stove for the fire box. You can check it out here, at http://geopathfinder.com/Masonry-Stove.html
In a previous home we had built a "real" masonry wood heater, complete with a warming bench, a puzzle chamber of flue paths, the whole 9 yards. The current hybrid stove works as well and was waaaay easier to construct.
show more
1 month ago
wood burning stoves
How do you label your fruit trees?
Back when we had some orchard plantings that weren't fenced for deer, we had aluminum labels on most nursery stock...until the deer decided that it would be fun to chew on the tags, rendering them illegible. After that we mapped all our plantings and keep it updated annually. Tags can be damaged or go missing entirely and you need a backup system in a safe spot.
Years ago we got some scion wood from an old orchard that had been abandoned for over 2 decades. Because the original owner of that orchard had made a map we were able to identify the variety of the tree that we liked so well, even though over the course of time many of the trees had died and were cut down. The grid pattern could still be made out and the remaining trees identified.
show more
1 month ago
fruit trees 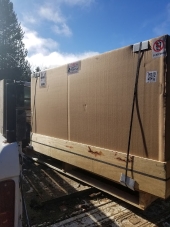 SunDanzer 12 VT Freezer
Don't put those PV panels on the roof if you live in snow country. Better to have them on a ground rack where you can keep the snow swept off them. You can use the power in winter to run other loads and put your food into a cooler in an outdoor shed or entryway. An advantage to living in a refrig for several months of the year ;>).
show more
1 month ago
solar
New Canning Jars

Larisa Walk wrote:I've found that small mouth jars are easier to seal as there is less circumference to seal. We used to can sauerkraut but have switched to doing smaller batches through the year and keeping it refrigerated so as to maintain a live culture. For that we prefer using wide mouth jars, usually half gallon size.

How long will the sauerkraut last in the fridge? I find that interesting for we make a lot of sauerkraut.

Yesterday we used the last of the radish ferment we made in the fall, about late October. Instead of using winter radish for this batch, we had a bunch of spring radish that had self-seeded that were in prime condition, needing something done with them before a serious freeze. It was a half gallon batch, stored in the root cellar. If stored in the fridge, the temps would be quite stable and storage conditions would be optimal and may keep even longer, although the flavor can intensify over time. In my opinion it's best to make a batch size that you will consume in a couple of months max rather than going for a longer storage time. Working in smaller batches you can use veggies from the root cellar to start another ferment a couple of weeks before the current batch is about used up. If you do get a bit of funk on the top, spoon it off until you're at a good looking layer that smells right. And make sure that when you're done that the "kraut" is pushed down under the liquid to minimize spoilage.
show more
1 month ago
food preservation