Jason Leue wrote:
I was wondering about that manure technique. Do you have any more info on this technique ( I think it's called glaze or something)?

It's called gley. Here's a thread about it:
https://permies.com/t/3409/ponds/Gley-technique-sealing-ponds-dams
show more
9 years ago
cob

Jason Leue wrote:I was wondering if I could use cob to create a pond liner for some garden beds?

Cob dissolves in water, and then you've just got a bunch of wet sand and clay. It's better to use all clay. I've heard the best way to seal a pond is to put pigs in it. Or you could simulate pigs by throwing in manure and doing a lot of wet tamping.
show more
9 years ago
cob 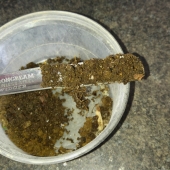 
Blueberries are in the heath family, ericaceae. This means that they must have symbiotic fungi to live properly, being so adapted to having mycorrhizae as to not have root hairs. I did a bit of quick research, and it turns out the issue is weirder than I first thought. Plants of the family ericaceae, and specifically blueberries have a type of mycorrhizial association called ericoid mycorrhizae, typically fungi of the genus Hymenoscypus or Rhizoscyphus, and most typically Rhizoscyphus ericae. And without digging deep into weird places I doubt I could get culture of that fungus. If I were you, I would try and get a bit of soil/root mass from a thriving old established blueberry / wild vaccinium / cranberry / heath / rhododendron / heather plant in decending order of preference; and try and get said soil around the roots as a sort of seed to hopefully get the inoculation. No hurry, but the fungus is how they get their food to a large degree, unless they are in a nursery getting weak chemical fertilizers in the water, in which case they don't even need the fungus and it tends to atrophy unless fed.

Sure enough, even fungi perfecti does not sell Hymenoscypus or Rhizoscyphus. So I'm going to look for somebody local with a good blueberry patch. Meanwhile, Ted also writes:


Pee would be particularly good for blueberries, due to blueberries only being able to uptake urea/ammonium ions for nitrogen, as opposed to most plants preferring nitrate ion.

According to the book Liquid Gold, urine should be diluted at least 8:1 before being fed to plants.

biocompatible dish soap
I'm curious about this too, because I'll eventually be running my kitchen sink to greywater. Here are two pages on the subject:

Both have lists of bad ingredients, and both recommend Oasis dishwash/all purpose cleaner.

inland northwest permaculture convergence
Here is the evolving scoop for INPC people coming in from out of town on thursday.

6:30-7:30 is potluck at the Salem Lutheran church followed by Jan Spencer's pc talk.

We probably will have a registration table set up at the church.

We will open lodging at the Mukogawa Fort Wright Institute dormitories at 7:30 pm.  Maureen Takogawa will be there to take payment for lodging and get people settled. Look for the Stowe House sign and our permaculture sign. There is a kitchen at each of the dormitory buildings and so people can prepare food there if they want.  We may have a volunteer cook up some soup so it is available, but at least we will have some food to cook with there.  Mukogawa is less than a mile from SFCC. google it for directions. We have to get that on the website yet.

quality of garden hose an issue?
There are "drinking water safe" hoses, and after comparing prices I bought an Apex 7612-50 from Amazon....

http://www.amazon.com/gp/product/B0007UQ2N2
show more
10 years ago
organic
Fluoride Water Filter Product Suggestions
Fluoride is one of the hardest things to remove from water. I've done a bit of research, and some sources say that only distillation or reverse osmosis will get it out, and other sources say that other methods will work, but then the first sources say that those methods only work for a short time or with acidic water.