Starting with Sheep this year
Been raising sheep since 1999.  Of the breeds mentioned:

St. Croix have a skinny carcass, are very heat and worm resistant, but are flighty, which can make them more of a challenge to handle than a calm sheep.

Barbados have a skinny carcass, are very heat and worm resistant, but are very flighty to the point of being a challenge to herd with a border collie.

Dorpers have a heavy, meaty carcass, have some heat tolerance, are the most susceptible to worms, but the calmest disposition of the four breeds being discussed.

Katahdin (which has St.Croix in its ancestry) is an all-rounder with  a decent carcass shape, good heat and worm resistance, and have intermediate flightyness.

My sheep are mostly katahdin with katahdin rams, but I’ll bring in a dorper ram when I want to breed for a heavier carcass or a St. Croix ram when I need more worm resistance.  I also cull for excessive flightyness
show more
1 week ago
goats and sheep
Goats/sheep and Bamboo
I’ve integrated bamboo into my sheep raising operation for over 20 years.  In the spring they provide fresh shoots for fodder, in the summer they provide shade which can be up to 7 degrees F cooler than ambient due to the bamboo leaf transpiration causing the grove to act like a giant swamp cooler.  In late winter, once the sheep have eaten all of the stockpiled grass in the pastures, I cut older canes out of the groves so they can eat the leaves while the canes left over can be used in the garden the next summer for trellises, etc.  In the pasture,  I fence off the area I wish the grove to occupy, the sheep eat every shoot that pops up outside the fenced area to prevent the bamboo from spreading.  I block the sheep out of the fenced area during the spring shooting season, but they have access to the grove’s interior for the remainder of the year.  The bamboo species I am feeding my sheep include Phyllostachys aurea, P. makinoe, P. rubromarginata, P. edulis, P. bambusoides, and Semiarundinaria fastuosa.
show more
3 weeks ago
goats and sheep 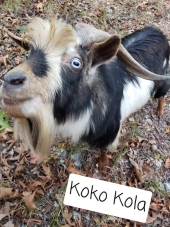 Kola meets The Kid... (A Goat Buck Battle)
Although it might be entertaining (similar to a cockfight), the above is why it’s not a good idea to put two strange bucks or rams together in the same field for an uninterrupted no holds barred battle for dominance, especially when I have paid good money for an expensive stud.  Although their wild ancestors have evolved to conduct full on battles with minimum damage, domestication and breeding for interesting horn shapes has left them more vulnerable to injuries as described above.  Here, the only time I will have more than one buck or ram in the same field is when they had been together since infancy and had plenty of time to work out their dominance hierarchy so that battles for dominance are minimal.

Whenever I bring a strange buck or ram onto the farm, I will pasture them with 1 or 2 large, skittish wethers for company.  Wethers; so that they will just act to defend themselves against aggression by the newcomer,  but won’t escalate matters. Large; ideally larger than the newcomer, so that the wethers will be intimidating to the new arrival and can handle any aggression directed their way.  Skittish; so the newcomer remains wary of you since their new herd mates obviously are.  A buck, ram, or bull (especially when bottle raised) is potentially the most dangerous animal on the farm and one you don’t want to get overly friendly or familiar with you to the point to where they lose their fear of you and start considering you as a potential rival (or breeding partner).

Also don’t put two strange buck or rams in adjacent fields sharing a common fence line.  When dueling, they will coordinate their charges so they meet simultaneously at the fence, which can quickly tear up field fencing, although horse fencing can tolerate a little more abuse.  If they have to be in adjacent fields, I’ll keep them in fields separated by a corridor or else by a second parallel fence line spaced 4 feet back from the original fence.  This second fence line will have cattle panel gates at either end opening into one of the two fields so that livestock can graze the area between the two fence lines whenever bucks or rams aren’t being kept in them.  The corridor is also a convenient place to crowd the herd in that field into whenever I need to do eye checks (famacha) or other visual checks.

Shade cloth for Kiwi
My fuzzy and hardy kiwis are growing in full sun in upstate SC without any problems with leaf curling as long as they aren’t drought stressed.
show more
2 months ago
kiwis
how to protect fuzzy kiwi from severe cold
I once had my fuzzy kiwis get killed back to the ground by a severe winter, but they grew back quickly from the roots the following spring and were flowering 2 years later.

As far as protection, I’ve thrown a blanket across the top of the “tee” trellis with it dropping to the ground on both sides to protect the flowers from late frosts and would likely try this in the event of another severe cold snap, possibly in combination with a small propane heater under the blanket.
show more
2 months ago
kiwis
Kiwi on a 4' chainlink fence?
Since kiwis are a vigorously growing twining vine, its going to be a difficult and tedious job to prune out the excess growth after it has twined itself throughout the chain link.  Kiwis take a lot of summer and winter pruning to keep them within bounds and under control.  Also kiwi likes to climb and even when growing on a 6 foot high trellis is continually sending new shoots 10 feet above the trellis.
show more
2 months ago
kiwis

Grow peas on young trees?
I plant and allow sugar snap peas to grow up through my figs in the winter.  The peas are mostly finished by the time that the figs start to leaf out.
show more
2 months ago
forest garden
planting citrus trees in autumn
No problems with planting citrus in the fall.  Gives it half a year to get its roots established in preparation for the summer’s droughts.
show more
2 months ago
forest garden

Natural Methods keeping Sheep Hooves worn down...
I drive mine down a gravel driveway on a regular basis.
show more
6 months ago
goats and sheep

Excessive heat warning keeping chickens cool.
I have my chicken coop and runs located in and around a bamboo grove.  The bamboo canopy has high levels of transpiration, so the entire grove acts as a giant swamp cooler with measured temperatures in the grove up to 7 degrees cooler than in the shade underneath nearby trees.  Under windless conditions, you can feel the cooler air sinking down from the canopy.  Chickens evolved with bamboo in Southeast Asia, where they are called “bamboo fowl”, and are strongly attracted to it, spending a lot of their time scratching and resting in it.  Many of my smaller, wilder breed chickens, such as red jungle fowl and old English game, prefer to roost for the night up in the bamboo canopy rather than in the coop.
show more
7 months ago
chickens