Wanting to try meat chickens on pasture
Wes, great info. What type chickens do you raise? How long to maturity? How much space per chicken in your range? Do you plant special foods for them? How much do you need to supplement their diet?
show more
3 years ago
chickens
Rainwater tanks - in the greenhouse or outside
Since you are not opposed to multiple tanks, why not put some in the greenhouse and some in the ground? I would build an in-ground cistern for drinking water, of either parraged block or solid concrete so the lime creates an unfriendly environment for bacteria. It is how most people in Bermuda get their drinking water. If you use block, do some research as they frequently develop cracks and leak, causing owners to install a liner which defeats the purpose of the block. I read once of a technique where little or no mortar is used between block, and then porraged with a skim coat (like stucco) to waterproof, which is supposed to be more stable and less suseptable to cracking than using mortar​. Steel reinforced concrete would be best, but most expensive.

Never get into a hole deeper than 4 feet without something in place to hold back the dirt. Hole collapses kill a lot of people.

Around here (east coast of USA)  you can buy plastic tanks about that size cheap, that were used for food grade soilbean oil or some such.

Btw, are you familiar with first flush rainwater collection? You could build a small tank of 50 gal (foodsafe 55 gallon drum for $20) to catch the rainwater, and when the tank fills it backs up the downspout and through a T into your drinking water tank. That way, all the bird poop, pollen, and dirt on your roof stays out of your drinking water. After the rain, you empty your first flush tank into your greenhouse water so it is empty and ready for the next rain. Smaller roofs would use smaller firstflush tanks.

Best of luck!
show more
3 years ago
rainwater catchment
pdc streaming kickstarter
Agreeing with comments above. How do I get the 200 hours of video? Download? Forever access online? My preference is DVD or Blu-ray so I can just pop it in an watch whenever I want in any tv without an internet connection, but would add considerably to cost.

Do people that watch all the video get the certificate?
show more
3 years ago
tinkering with this site
pollarding black locust trees for living fence posts
If you live in an area like I do where black locust grow like weeds, go for it. I have put lag bolts into black locust for a few years and never had a problem. If it dies, use it for firewood. Another will sprout up to replace it. Around here they seem to grow 5 or 10 feet a year.

I would recommend a high quality stainless steel long skinny (3/8 or 7/16 inch) lag bolt or eye bolt  that you can back out of the tree a little bit each year as the tree grows. Anything skinnier might break before backing out. If you predrill a hole the size of the bolt shank (excluding threads) you will reduce the likelihood of splitting the tree when you screw in the bolt. The tree will heal very quickly when you install it, but there is always the remote possibility of bugs getting in before it does. Do not put it in a crotch or other area that collects water. I'm not a tree expert, but I don't see the logic of installing a board that will quickly be engulfed by a black locust, and result in disrupting the flow of nutrients on one whole side of a tree. I would stick with a skinny lag bolts and doubt the tree would even notice it. Unless the idea is that it is easier to pry off a board and move it each year, rather than an insulator. But better to use a nut to hold the insulator on the end of the bolt, an inch or so away from the tree so the only thing touching the tree is the bolt, which can be backed out each year as the tree grow around it.

Locust grows fast, so don't forget to back the bolt out each year, or it will quickly disappear, and cause serious damage to someone using a chainsaw later.

If you run the wire on the inside of your paddock it will slacken each year as the tree grows but you might be able to rig some type of spring or weighted tensioning system to save you from having to re-rig it for a few years. 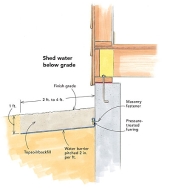 They make very expensive synthetic basement waterproofing systems now. In the old days we used to dig around the foundation to the footer, smear roof cement on the exterior, then fabric, and install French drains inside and out with a sump pump. It always worked, and was fairly cheap if you did all the labor yourself, but took us all summer to do each house. If you dig below 4 feet you need a mechanical device to prevent cave ins so you don't get buried alive. With a good backhoe operator, you could probably do it in a week.

Generally speaking, if you can grade the soil one inch to the foot, away from your house for 6 or 8 feet, and run all your downspouts 6 feet away from the house, that usually solves most problems, but not always.

After going what I went through, I would never own a house with a basement. It is so much easier and cheaper to add another story up. The only thing I would want a basement for would be for a root cellar and would never finish it as a living space. 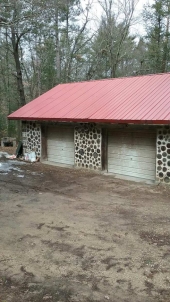 Are we completely crazy?
Hi Lisa,

It is possible for 2 very experienced people to build a finished 800 sqft house in 3 months, but is tough. You will be able to get it under roof, but it takes longer to finish interiors than to build the shell. It may take you all winter to do the interior.

The biggest problem people in these forums have is with getting natural building plans approved by the county so you can get a building permit, and ultimately an occupancy permit to live in it. First step is to have a nice long chat with the folks in the permit office about what you have in mind before you start.

Try to build close to the road to minimize electric line costs, unless you are going to live off grid. Driveway costs too.

Outlets should be every 2 ft along the countertop backsplash in alternating circuits, tied to GFCI breakers so you don't get electrocuted if the mixer falls into your sink.

Also add a pull out faucet above the stove top to fill large pots right on the stove so you don't have to carry from the sink. They make faucets specifically for over stoves. Great for filling stock pots, soup pots, pasta and for canning.

If/when you install under cabinet lighting, you will be amazed at what a difference it makes. No comparison to overhead lighting.

All the lights in a room should be the same color. Light bulbs come in several different colors of white, from soft white, warm white, cool white, bright white and daylight (if memory serves). I prefer daylight for manual task lighting, but some find it too harsh and prefer bright white or cool white. Colors are expressed in degrees kelvin, so make sure all your bulbs are the same color (K) or it will drive you nuts. Soft white are the cheapest and most popular because they are actually yellow and make your complexion look best and yellow teeth appear white. I hate them because they distort true colors. 😀. Use them in the living room, bedroom, or dining room if you must. Personally I would use 60 watt equivalent daylight LED bulbs on dimmers everywhere.

I haven't had a microwave in 10 years. Not enough counter space.

Like others, I reheat pasta and chinese noodles in a small pan with a quarter cup of water in the bottom. Cover with lid and turn up high and stir frequently. It basically steams it and the water you added to prevent sticking boils off so it ends up the same consistency as the original.

Reheat leftover meats and pizza under the oven broiler which takes about a minute. I frequently take all my leftovers ( green beans, mash potatoes, meat, etc.) Smush down real flat and broil it for a minute. Some of it gets crunchy, but I like that. Sprinkle with water first if you want it to stay soft. If it is a thick piece of meat, you will have to flip it once. I am too impatient to use the oven on weeknights.

When I make spaghetti sauce or chili, I make a bunch and freeze in individual servings. When I get home from work, I drop the rock hard frozen block of spaghetti sauce (because I never think far enough ahead to defrost) in a small covered pot with a tiny bit of water, and boil another small pot for cooking the angel hair pasta, and I am eating in 10 min or so. Now THAT is fast food!

The good thing about using an oven or broiler is that reheating for two or more people, does not take twice as much time as reheating for one, like it does in a microwave. And I can cook mashed potatoes from raw on a stove top much faster than someone using a microwave, because I cut the raw potatoes into small pieces and boil.

Try reheating your rice bags in a solar oven made from a few pieces of aluminum foil in a south facing window.

show more
4 years ago
cooking
Root Cellar Venting and Wall Material Questions
The area of the opening in a 4 inch pipe (12.6 sq in) is almost twice the area of a 3 inch pipe (7 sq in) so I suspect 3 inch or smaller pipe will be much too small. Also, the additional drag of the disproportionally larger walls of the smaller pile (as compared to the volume) will further reduce airflow, but don't know the math on that. I am not sure what affect the "chimney effect" will have on a smaller pipe.

Square inch area of a circle is 3.14 x R x R (where R is half the pipe diameter in inches).

Cubic inch volume of a pipe is area x length in inches.

UPDATE: I just noticed you said the area of your cellar is 1/3 the size, so please disregard my comment. 😀
show more
4 years ago
wofati and earth berm
Bad Neighbors
Most snake strikes occur when you walk up on a snake and surprise it, so when walking, make lots of noise and poke ahead of you with a walking stick, or my preference is to just wear hiking gaitors designed to protect against snakes. They seem to always strike below the knee. I have surprised a few rattle snakes on the trail and fortunately was wearing very thick paints and got lucky, but would now definitely wear gaitors over paints. Even in summer, i would wear tall socks with gaitors over with my shorts.