Looking for Recommendations for Flip Flop Sandals
I found discount, bright neon purple-y Birkenstocks for about $40 this winter to replace the no-name sandals I had destroyed. A few years ago I had another pair of Birkenstocks which eventually started to disintegrate, after about three years - hopefully because I didn't take care of them. I say hopefully, because this time I've got some cork resealant that I'll be putting on my new pair religiously, and hopefully they will last longer then the previous. (Although I should probably be more careful about getting them wet and muddy, regardless of sealant.) You might get lucky and find a pair in your size in a weird colour too. In between somewhere there I've also had Merrells, and I really liked them too.
show more
1 week ago
gear

Had a deer come by yesterday who stripped quite a few drying-up currants off the bushes before he was frightened away. I was thinking more along the line of attracting birds, but I guess deer work too, as long as they don't start eating other things as well.

While I planted more lettuce seed for a second crop, none of it has come up, and so I'm just about out of lettuce now. I think maybe it's gotten too hot for it to grow, at last, we are having summer temperatures.
Now that I've run out of extra produce to give away, the food sharing hut has re-opened in town.

I've begun harvesting zucchinni and potatoes - I've planted a few bush beans in the space cleared when I pull potato plants and maybe they'll have time to grow a few pods. I'm getting giant pods on some of the runner beans at the moment, I'm wondering if I can make a sort of hummus from their seeds later on. (I don't really like the runner bean pods to eat, even when they're small, so I just grow the runner beans for fun and shade. They're becoming something of a tradition here.)
Volunteer nasturtiums are flowering, morning glories are growing..
And I've got one winter squash starting to grow.
I think because of all the rain we've had, the squash (including the zucchinni) has had trouble with pollination. Or rather, the bees have had trouble pollinating them.

I'm letting one zucchinni fruit grow just to see how big it gets.

I'm getting worried about how I'm going to store all the potatoes, I've already had some start to go a little soft between harvesting and cooking them up. I suppose I should do some blanching and wedge making, and throw the results in the freezer, but it's hot and I haven't wanted to spend time in the kitchen. So mostly I'm still "storing" them in the ground, even though the plants are starting to look a bit "done," what with the heat.
I guess I'll just have to forge ahead and do what needs to be done, preserving potatoes wise. Gosh I wish I had a root cellar.
I suppose I could take a few potatoes to the food-share.

The horseradish plant is huge. The leaves are so big and strong they hold water well into the morning after their late-night irrigation.

And I have one poppy that grew, flowered, and is now, I hope, making lots of seeds, so I can maybe have more next year.

Miner's Garden Project
It's been raining a lot for this time of year, here. A few days ago I encountered seven or eight snails, all quite close by to each other. One of my neighbours has told me that he's fighting his lawn grubs with pesticide. I figure that the raccoon have taken care of grubs in the past, and I don't really care if my lawn isn't perfect, so why worry about them? I have taken to flinging snails out onto the road, though. I think they've got a haven in my other neighbour's yard, and I haven't really objected to seeing a few - but seeing eight snails in under five minutes while weeding is about six snails too many, when I'm trying to get my hollyhocks to grow.

I thinned out my onion patch considerably, gathering a big armful of onion. I then threw them onto the compost pile - because I already have more than enough onion right now, thankyouverymuch. Alas, the garden-food-sharing shed in town is still shut down.

We've been getting all of our salad greens from the garden for the past month or so now, which is great. All the saskatoon berries have been consumed. Starting on the currants now, although I'll be leaving most of them on the bushes for the birds and whoever. (Again, if the food-share was operating, I'd be giving them this food.)

Read a local newspaper article today saying that 70% of local farmers figure they will be bringing in less food this year - because of the combination of overly-rainy weather and a lack of migrant labour, and general uncertainty. And yet, I have yet to see local farmers making a concerted effort to get locals out into their orchards/fields to try and replace some of those missing migrants. The same article said that for the past couple of years, apples have cost more to produce than has been paid for them to the producers. Certainly I know I've been able to buy local apples very cheaply in the recent past.

I've also noticed a confusing lack of maintenance in the local parks this summer - is weeding not a easily-socially-distanced activity? Are small parks, being outdoors, not one of the few places people can go to entertain themselves safely? What is the town thinking on this? Have they deliberately cut back on park maintenance to save money? Or are their employees simply just not enthusiastic about working? Do they want to discourage people from gathering in the parks? To date, to my knowledge, no one in my immediate region has tested positive for Covid-19, although we continue to worry about summer tourists accidentally bringing it with them.

Back in my garden, one row of potatoes has flowered, and the other has not. (I think one row has the plants planted too close together and will soon be thinning it and hopefully getting baby new potatoes to eat in the process.) I know that there is a theory saying I should take the flowers off so the plant focuses it's energy on making spuds, but the flowers are pretty!

My dahlia is flowering, one of the runner beans has reached the patio roof, and the morning glories are starting to climb as well. Some of the squash plants are starting to show signs of vigour and flowering, and some are not. I was able to get myself together enough to put kitchen scraps in the seed holes for some of the squash, and some did not get scraps to 'eat.' I am going to assume that the plants that are happiest right now are the ones that were fed, although my record keeping is... non-existent on this matter.

I've started to dig a shallow trench around my sumac patch, and rip out the roots that have been making their way through the lawn for a number of years now. They weren't a noticeable problem until this year, I figure because it's been raining so much. Now little sumacs are popping up in unwanted places, thus the trench-and-root-pulling project. I want to keep the sumac patch, I just don't want my entire garden to turn into a sumac patch. It is surprisingly fun to yank up sumac roots, and surprisingly easy in the sandy earth, given that they seem to run along only a few inches underground. It is an especially good thing to do after hearing conflicting and confusing news reports.

Miner's Garden Project
Not much to do now but wait for plants to grow.

After a couple of warm days and a downpour of rain, my currants and saskatoons are starting to ripen.
It's been a bit cool and damp. The big heat hasn't arrived quite yet.

I have been using flowering sage as a cut flower for the dinning table, and the rose bushes that came to me as small Valentine's gifts and now live in the garden year round are in blossom. The lavender is also flowering, and I've cut back most of my comfrey for the first time this year. The hollyhock has gone apparently unmolested for about ten days now and is starting to gain some height.

If I wanted to, I could use a lot of onion.

I have verified that I do indeed have zucchini growing, but the ground cherries have not sprouted. I've got some lettuce and sorrel I can harvest as needed, and all of the potatoes I planted seem to be alive and growing. Squash is growing. A few strawberries are growing.

Something came along and cut down most of the wheat that had just started to grow in a big pot on the patio (I thought it might be ornamental there but now what's left just looks pathetic. I will probably plant something else in that pot soon.) I planted some carrot seed in my other big patio pot and it's starting to grow. I might be able to get a few decent carrots out of there eventually.

Runner beans are doing their thing, morning glory seedlings are looking a bit "stuck" but I'm sure they're still growing roots. Or they'd prefer it was a bit warmer. Or something.

Watched a pair of quail taking a dust bath alongside some of my potato plantings the other day, where the soil is exposed - because I've expanded my garden I don't have quite enough mulch-stuff  at the moment but the next time I mow the lawn, which will be soon, I can at least collect some grass clippings to throw about.

And my pure frivolity purchase, a dahlia, is happily growing too. 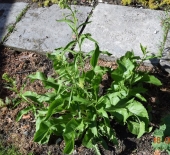 Is this by any chance horseradish?
Okay! I just tasted some of the leaves. I believe it is indeed horseradish!


Thanks for the help!
show more
2 months ago
gardening for beginners

How to design a hummingbird garden
I find that hummingbirds also really love scarlet runner beans. Here is a photo I took maybe thirty minutes ago - there is a hummingbird in there!
show more
2 months ago
pollinators

Bumblebee Garden Project
A surprise this early afternoon - this hummingbird enjoyed checking out the speedwell.

Bumblebee Garden Project
The bumblebee bed is starting to get a little crowded! The forsythia has already bloomed, as have a few daffodils that I put in last year. I'd like to put in more daffys for next spring. I don't know if I'll put in colourful annuals this year - on one hand I'd like to - on the other hand I'd have to go fight for the seeds or plants. I am wondering if there is a perrennial I might introduce, perhaps next year, that would have blooms that would be not yellow and not blue/purple. Perhaps something that blooms red?
show more
2 months ago
gardening for beginners

Is this by any chance horseradish?
Have I asked before? I'm sorry.

This plant has been in my garden for two years now. A friend did give me some horseradish, and I did put it in about where this is growing.

Miner's Garden Project
This morning is absolutely gorgeous. It rained most of yesterday, so the grass and ground is very wet, lots of white clouds rolling away along the mountains - and a hawk couple circling and calling near by.

Also, the rain encouraged some seedlings to pop up! Including some nasturtium that I didn't plant this year, but I did leave some little pods on the ground last fall...

I weeded and took pictures. And harvested a little bit of rhubarb - the first rhubarb harvest from this garden!